Yes, I think this is the place… 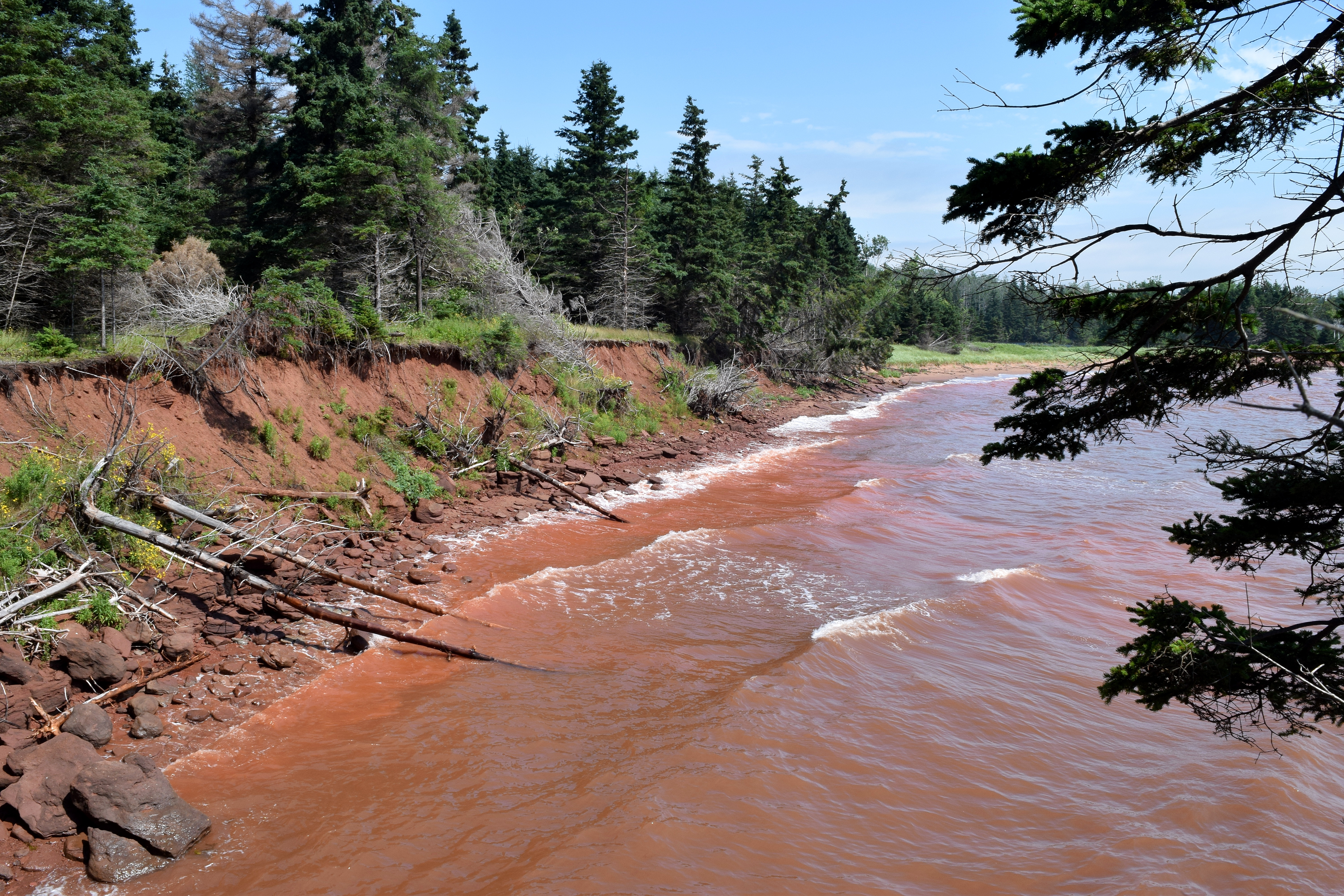 The dirt here is pleasantly red

I’m writing from way out in the woods on Prince Edward Island. 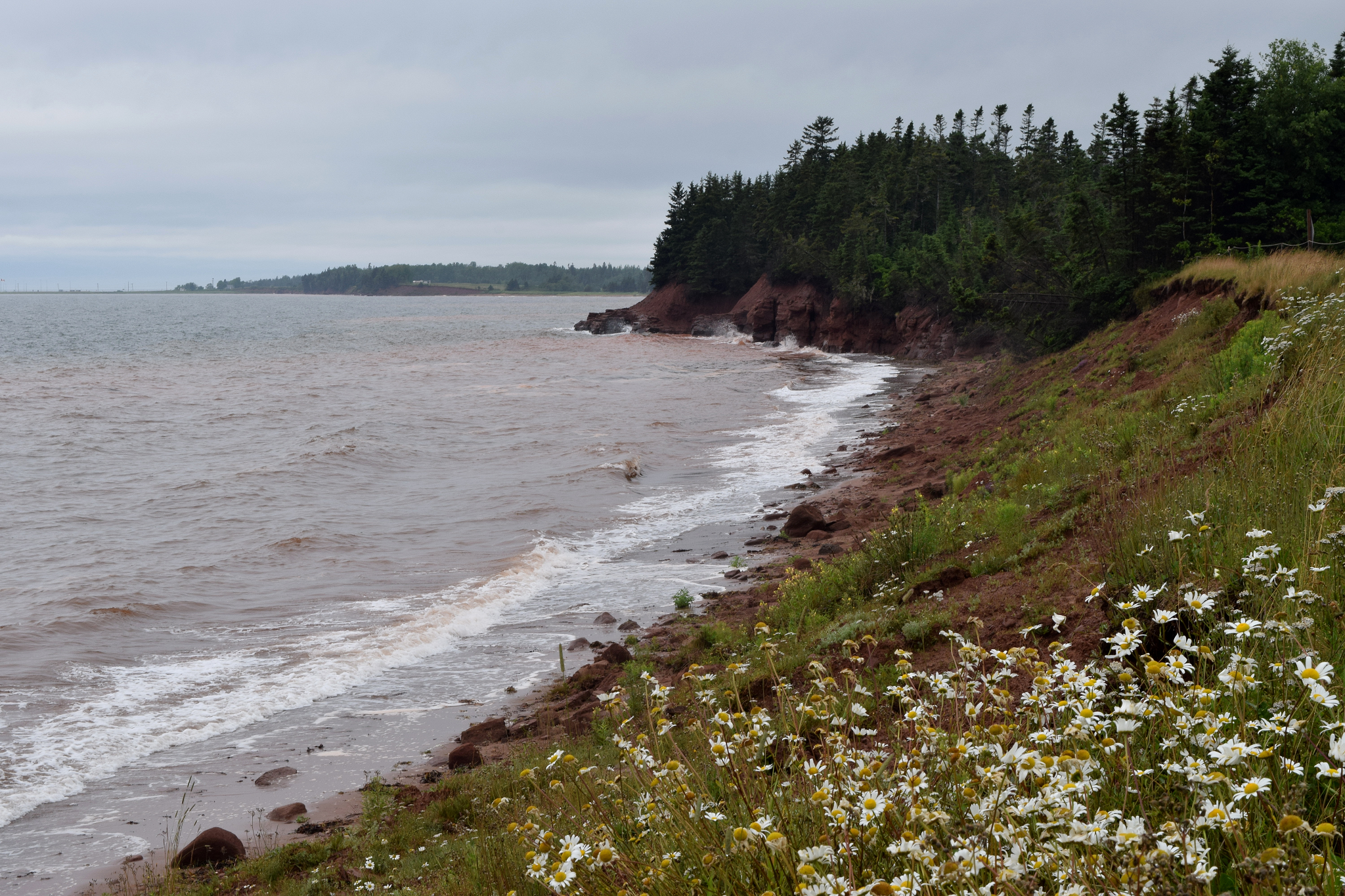 Today is the second day of the Canada adventure, and it has been a great but challenging day. Yesterday was challenging too, we had to drive here and it was far! Mom and I spent over twelve hours on the road in separate cars through mostly Maine and New Brunswick. We crossed miles of serious wilderness to get here, hundreds and hundreds of miles of trees. They were beautiful clean northern trees, with moss and lichen. Dripping hemlocks, stately cedars and elegant birches surrounded us as we passed through vast untrailed marshlands and fields of wildflowers in northern Maine. At some point the hot summer weather quit and the air became cool. In New Brunswick, there were ridges and small mountains. 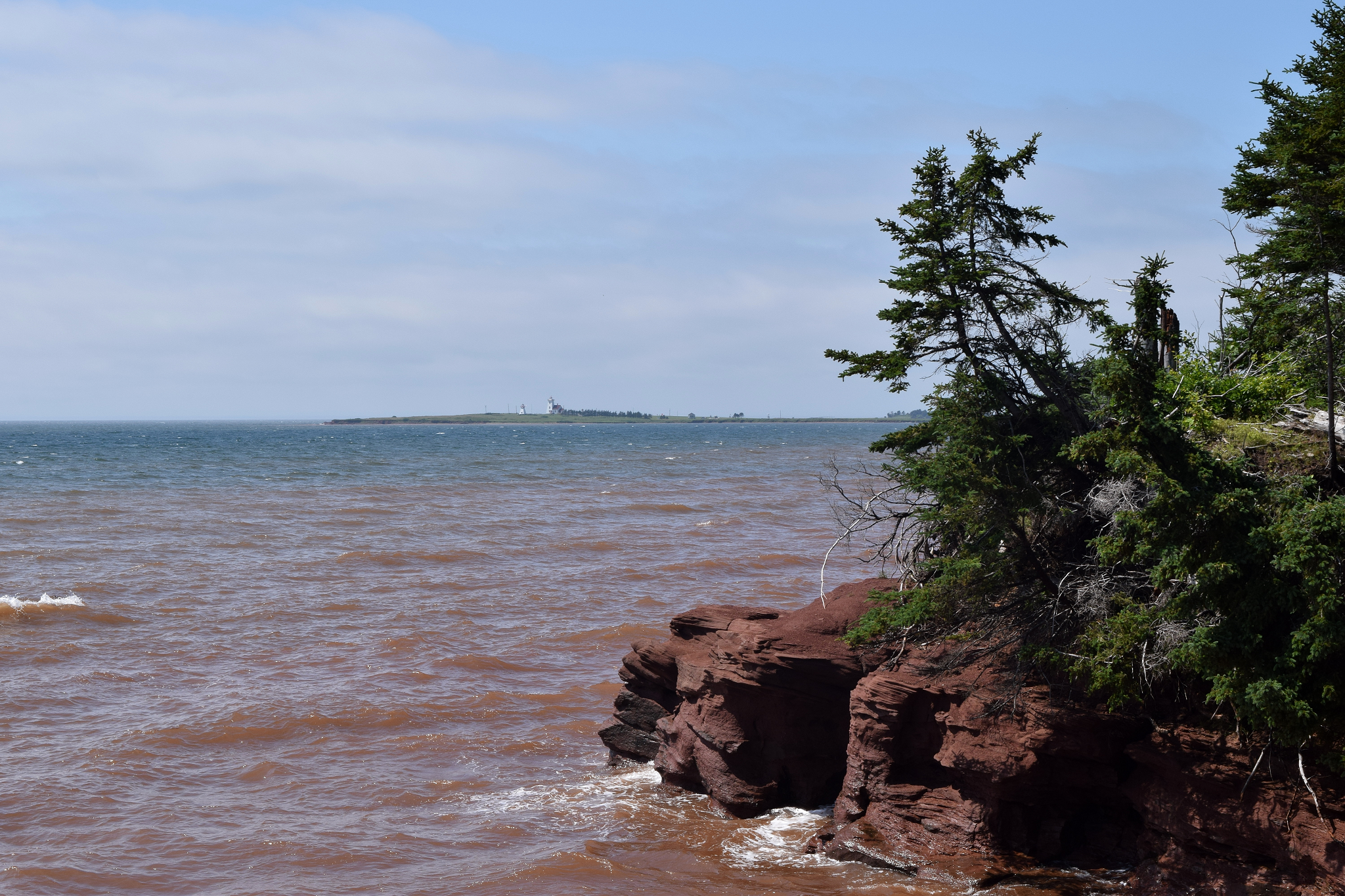 Finally darkness came upon us as we drove through Cap Pelé and crossed a long way over the Confederation Bridge. Now we were on Prince Edward Island. This is the place where my grandfather’s land is. It has been in our family since generations past, they came from Scotland first to Canada and were farmers here. At some point they moved south to Rhode Island where my grandfather currently lives and abandoned the seaside farm. The trees reclaimed the land, and today my great grandmother’s fields of daisies she remembers from childhood have returned to the natural state, dense woods. If there are any remains still of the old driveway and house in this intrepid wilderness, I plan to find them. 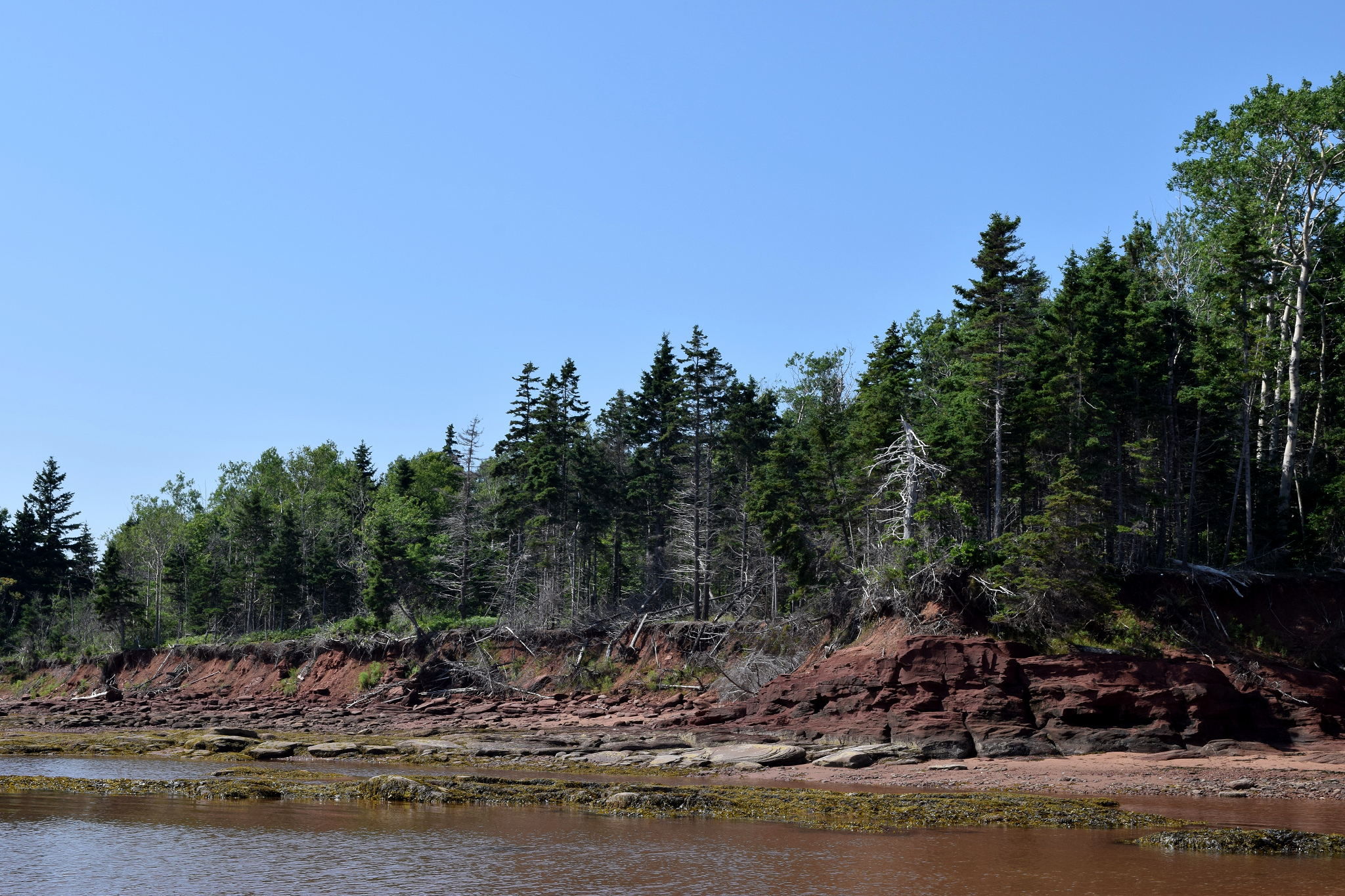 We drove for two hours in the dark, through the main towns on P.E.I. and to the far side of the enormous island. There was a distinct feeling I felt from the night roads around the rolling farms and northern forests. The cool air and various smells out the open window, like sweet marsh ocean and mossy farm, musty but clean like mulch, fresh and wet. Mom and I agreed, the place felt like home, like we were driving home, and I imagined as I drove how it would feel to live here. I would soon find out… 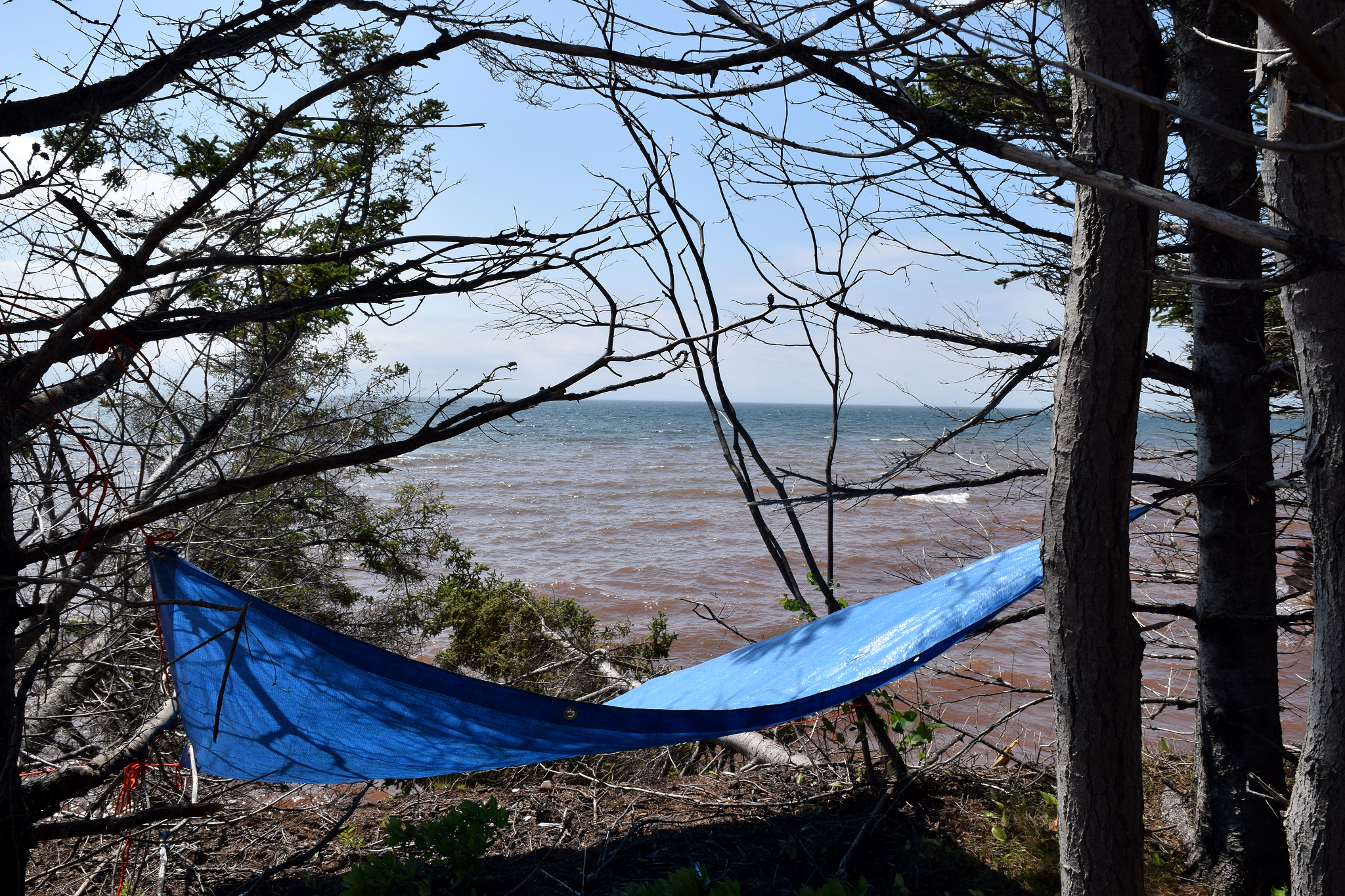 camped under this tarp

We noticed the fearsomeness of the mosquitoes when we arrived, we spent the night at a campground in the nearby Provincial Park. We pulled in for camp at midnight or later, planning to move camp the next day to our land. Unfortunately, while my bivvy sack does a good job keeping out mosquitoes, it is not so good at keeping out rain. This was a real Canadian rain we had in the morning, and when pelted with that unrelenting stuff for long enough it’s hard to keep anything dry. We woke up all wrong, I was in a puddle and were soon under vicious mosquito attack. However, we stayed positive! 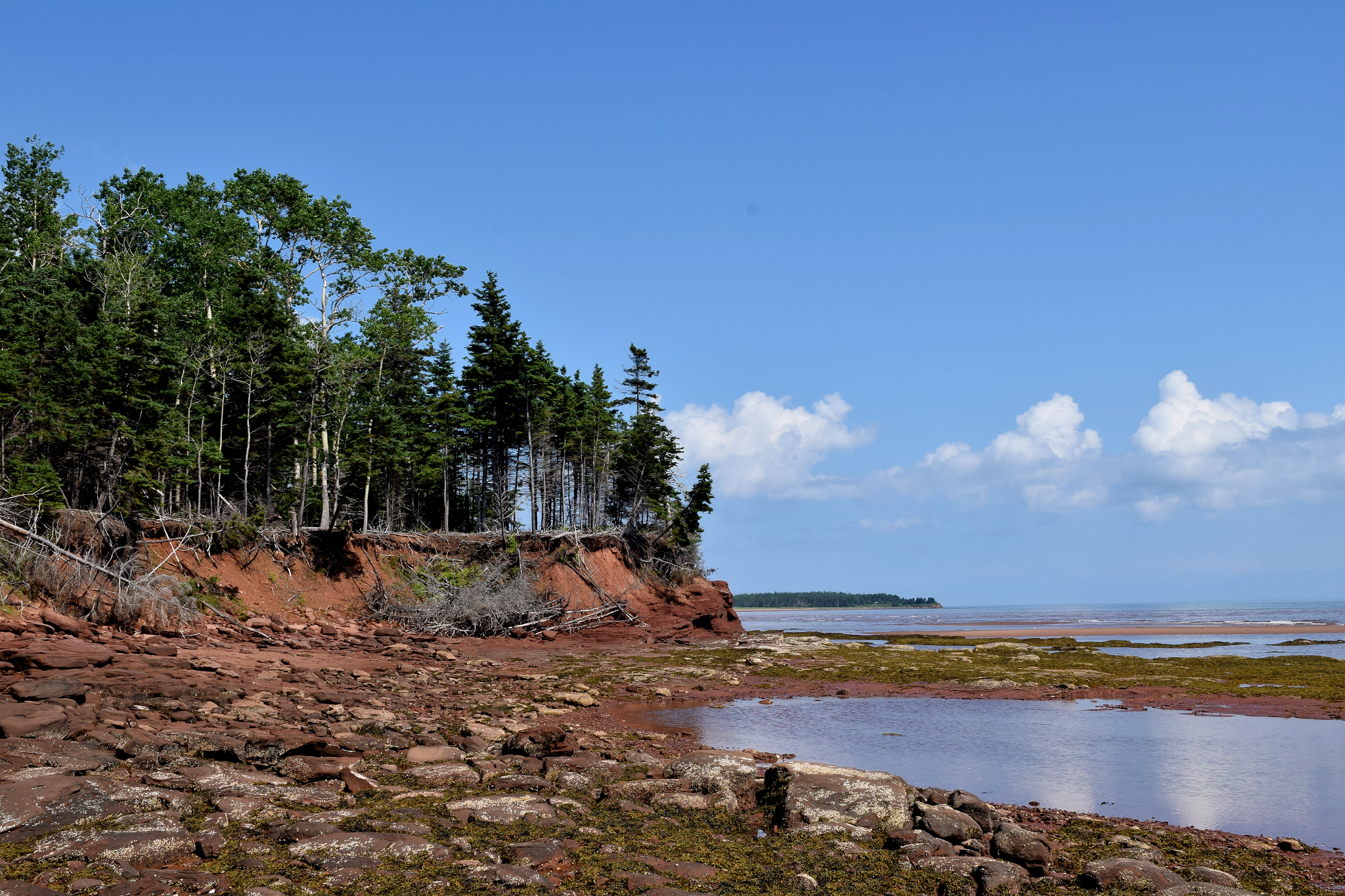 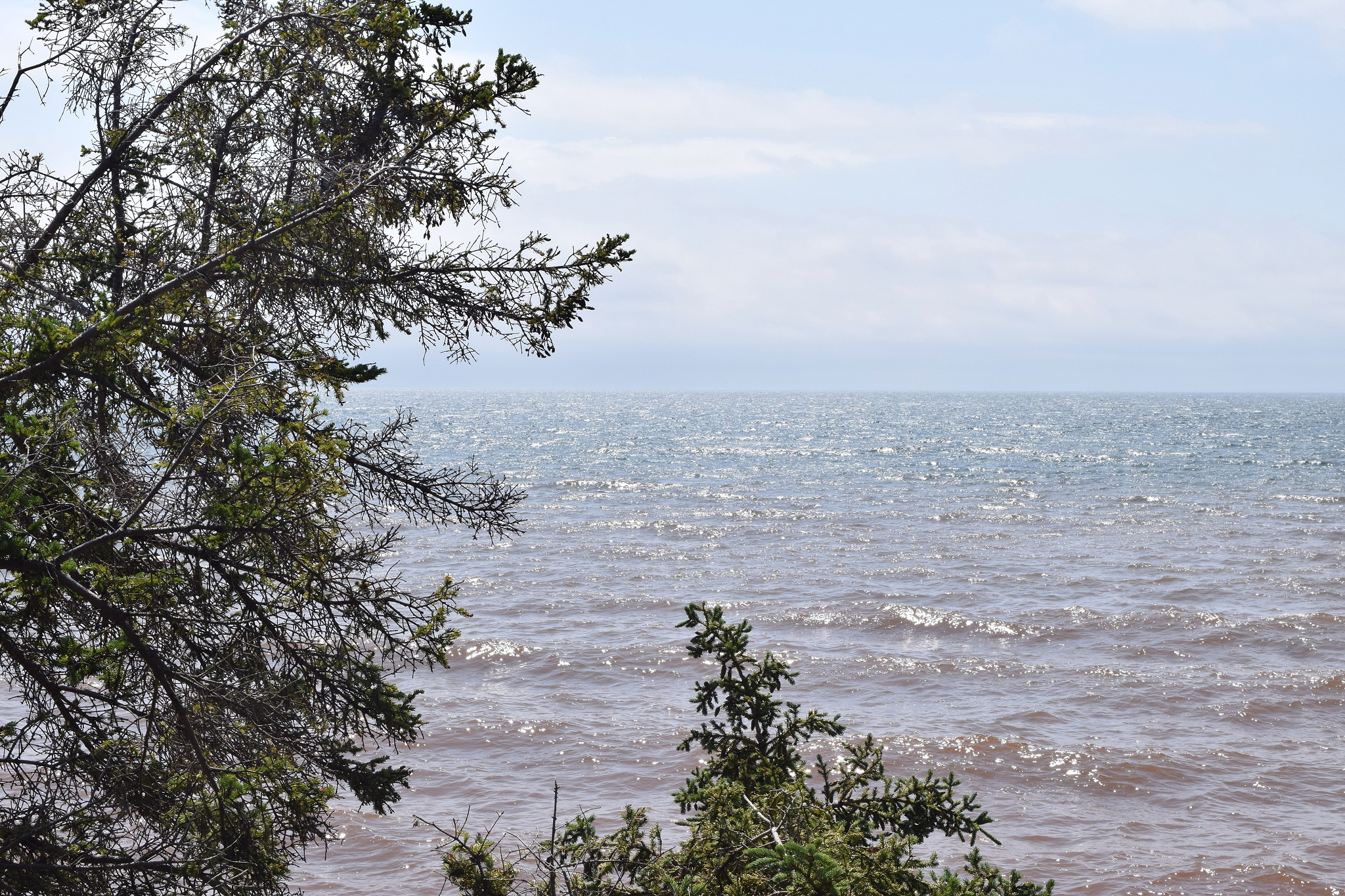 We drove to the family land, pristine forest along the Northumberland Strait, and parked on the side of the highway. When mom has been here before, she walks in on the tide flats of the beach beneath the red dirt bluffs and pine trees. You have to climb up the dirt to get to a good spot to camp. The forest is so thick, only the edges of the property are currently usable. The tide was high and the beach was gone under raging surf. Finding it too deep to wade through, we cut our way into the jungle directly from the small dirt road running down the side of the property. It was a fight to get in. 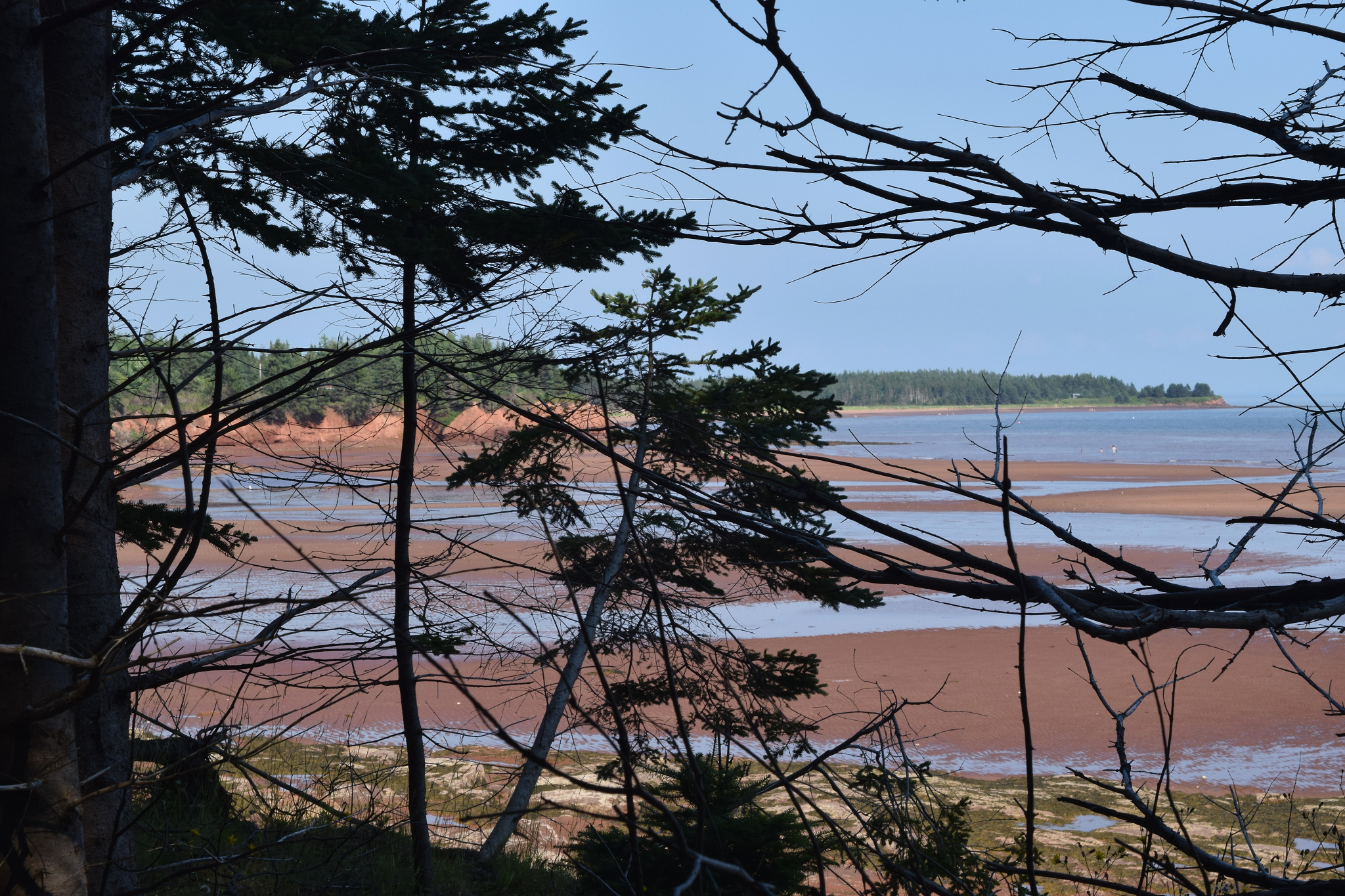 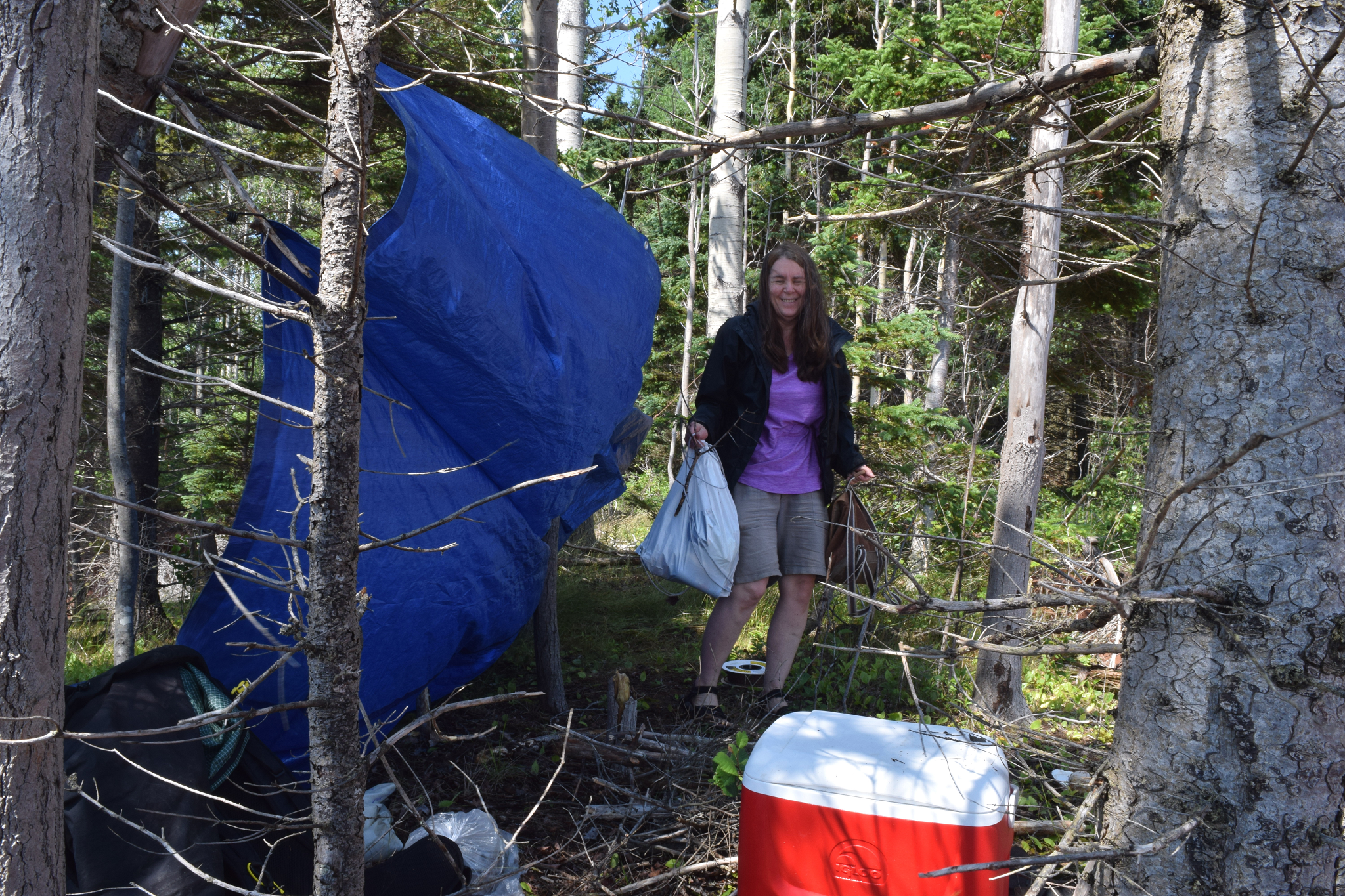 Mom setting up the camp

The other times Mom had been here, she had never seen mosquitoes like this, tis the season. They were extremely bad, reminding me of the Pacific Crest trail in Washington, reminding her of Florida in summer. They ate us alive as we bushwhacked. All the same, we were on our land and we were here to stay, figure out how we could someday, somehow, make this place a home. That’s our dream, to develop this property, the mosquitoes wont deter us! We saw strange mushrooms, and foreign plants, the trees gracefully suspended in a stopped motion fall where the bluffs are being eroded away into the sea. 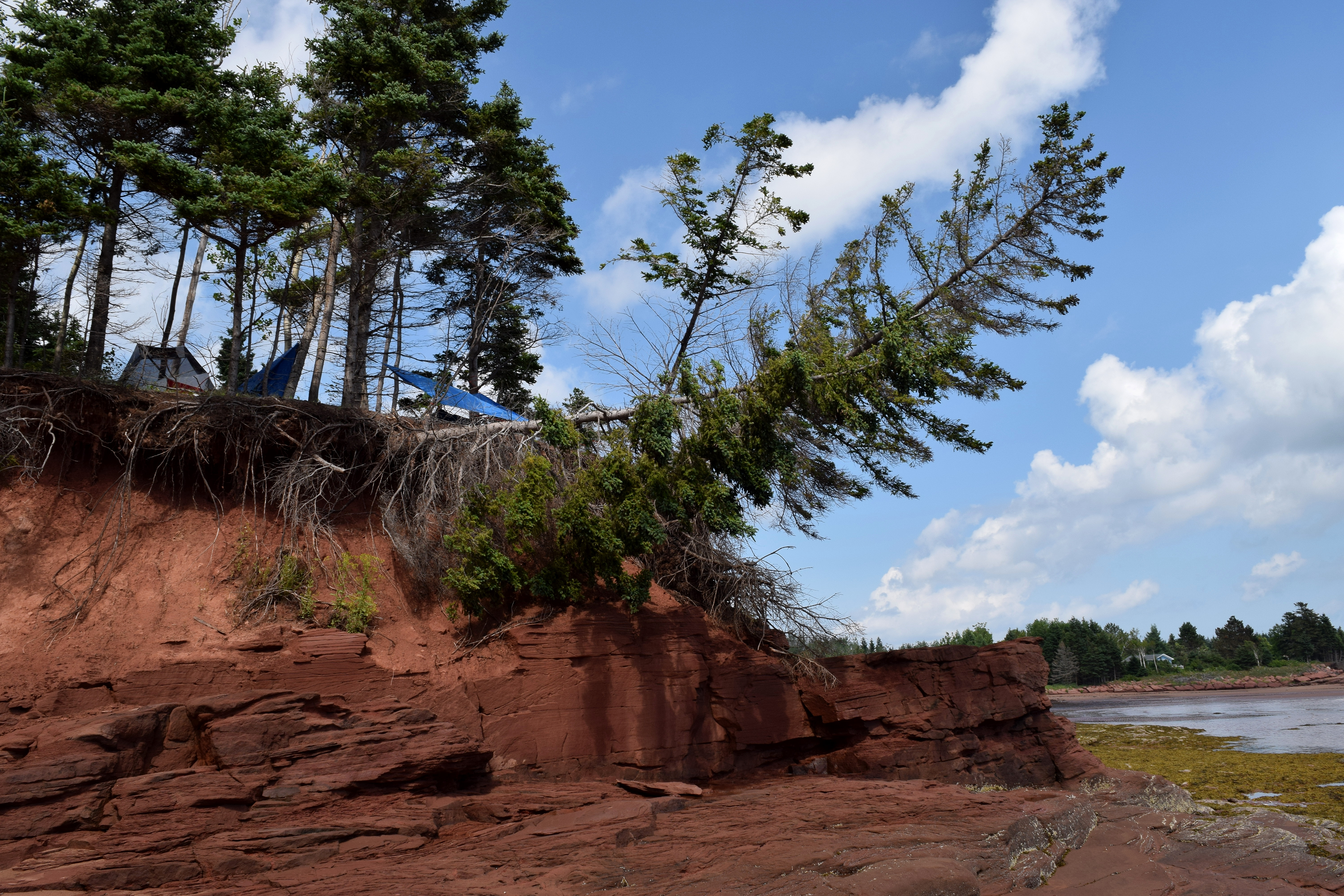 We picked alpine strawberries growing as groundcover. Eventually we made our way to a point of land sticking out into the water, cliffs dropping away on three sides. The mosquitoes were blown away by the wind here and we were relatively safe. We rubbed raw garlic all over ourselves and ate it to try and ward them off, it seemed to work well. We didn’t have bug spray, but I don’t really think that stuff works anyway. We decided to name the spot Garlic Point and setup a beautiful camp there. 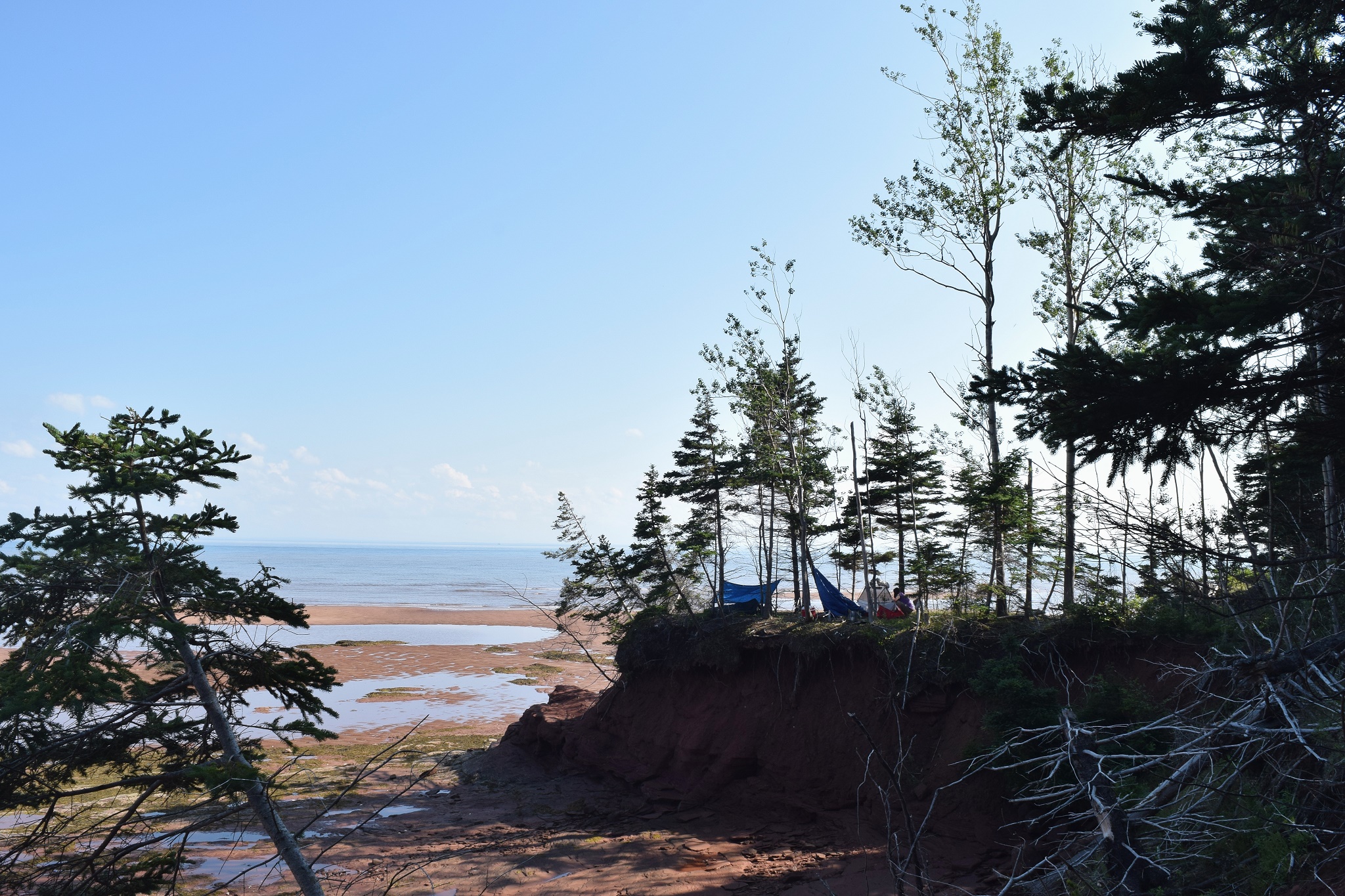 We spent the rest of the day swimming and walking the beach which became incredibly long with numerous sandbars as the northern tide went way out. The landscape here is ever changing with these extreme tides, and it changes fast. From our cliff top we watched the tide as it came back in, herons glided around the shore. We had to make a few trips back and forth to the cars and nature gave us hell, the place truly is wild and rugged. We both have red welts all over our faces, I later learned these are coming from black flies. They are a scourge, now when I see one of those I attack. My eyelid is swollen and puffy form a bite, the bugs got the better of us all day. Even in full mosquito gear they still ravaged me. It’s an added challenge, all the same, we love it here, want to live here, and will persevere! I’m going to live among these little vampires in this bivvy sack where I currently sit watching them cling to the screen for the next 4 days. 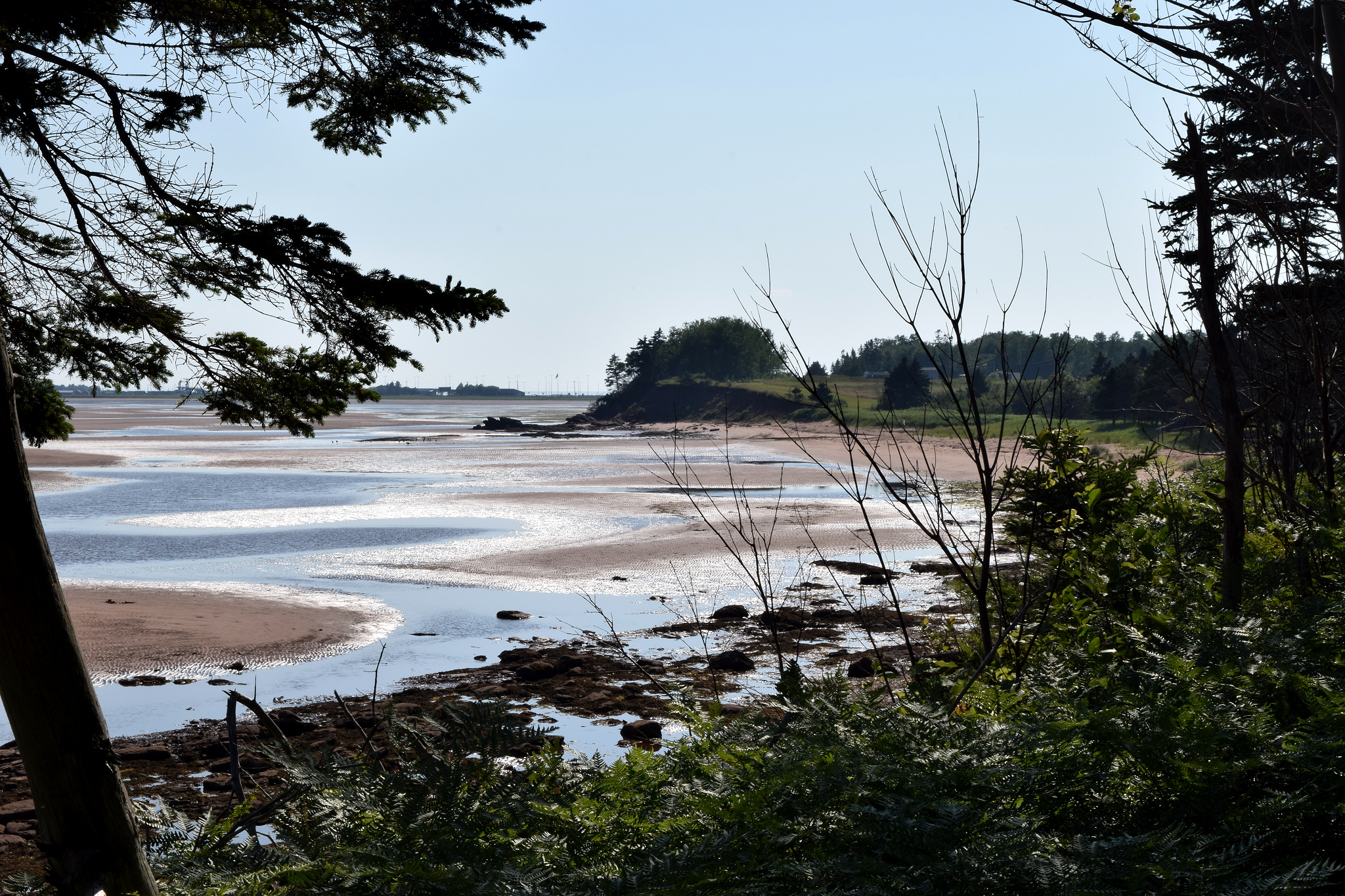 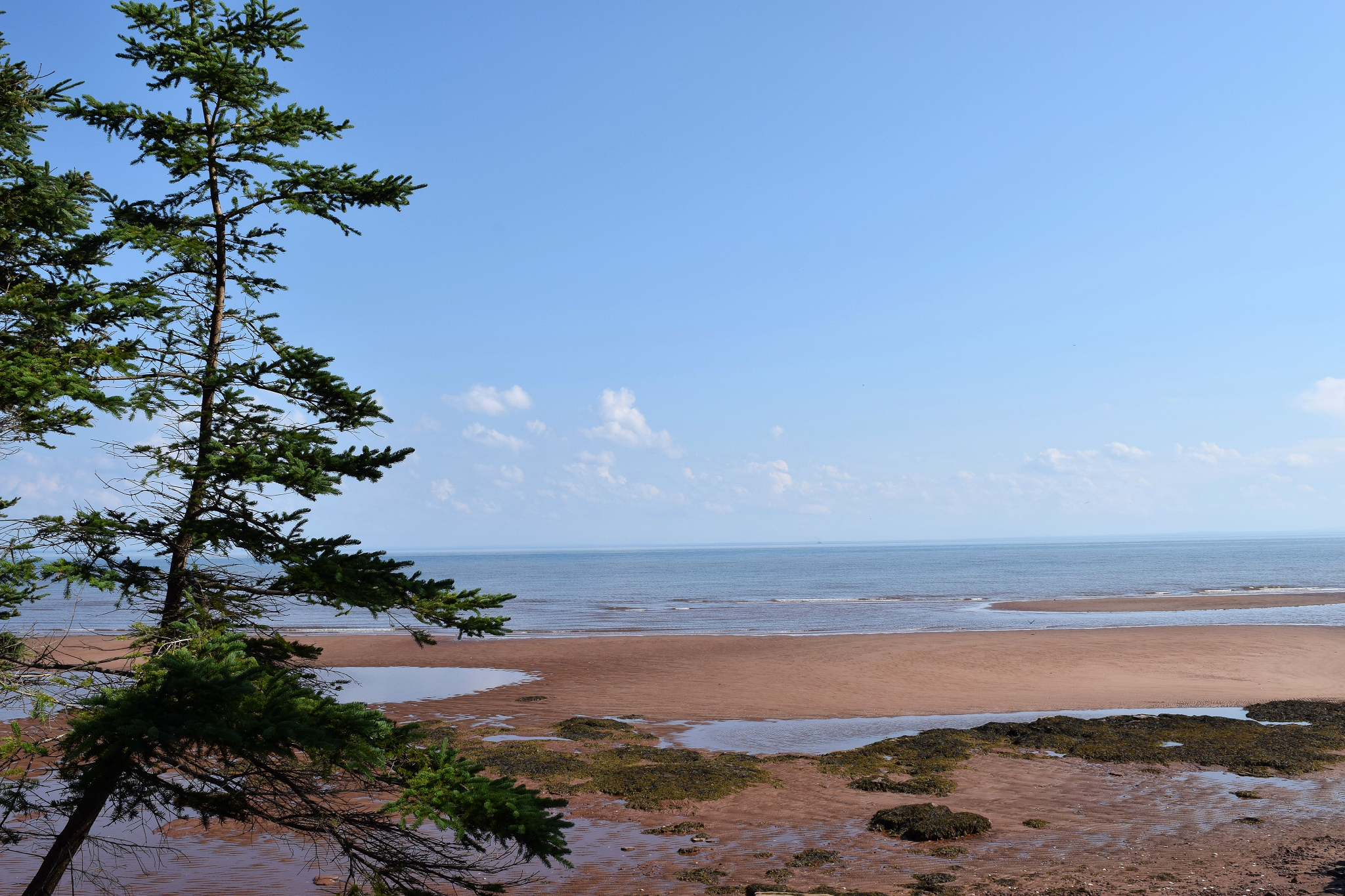 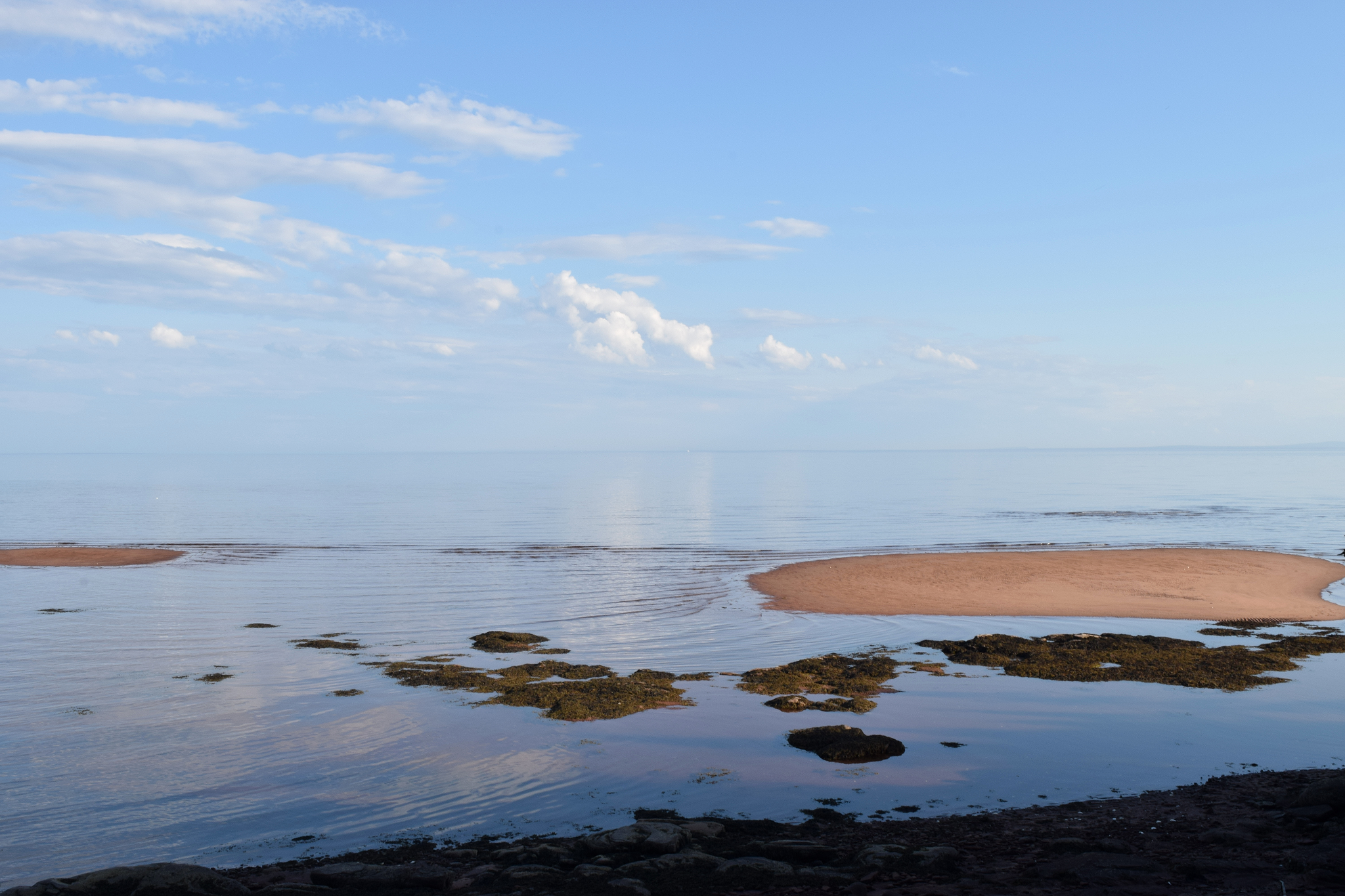 We made friends with two Canadian clam diggers as we watched the sun go down, and suddenly at dusk the mosquitoes became unbelievable! Mom has a great tent and sheltered in it. We are having a lot of fun together and are both unflinchingly positive, even though this trip is harder than the kinds of trips we usually take together. Definitely one to remember, this will be a difficult place for me to conquer, and someday I hope I can. 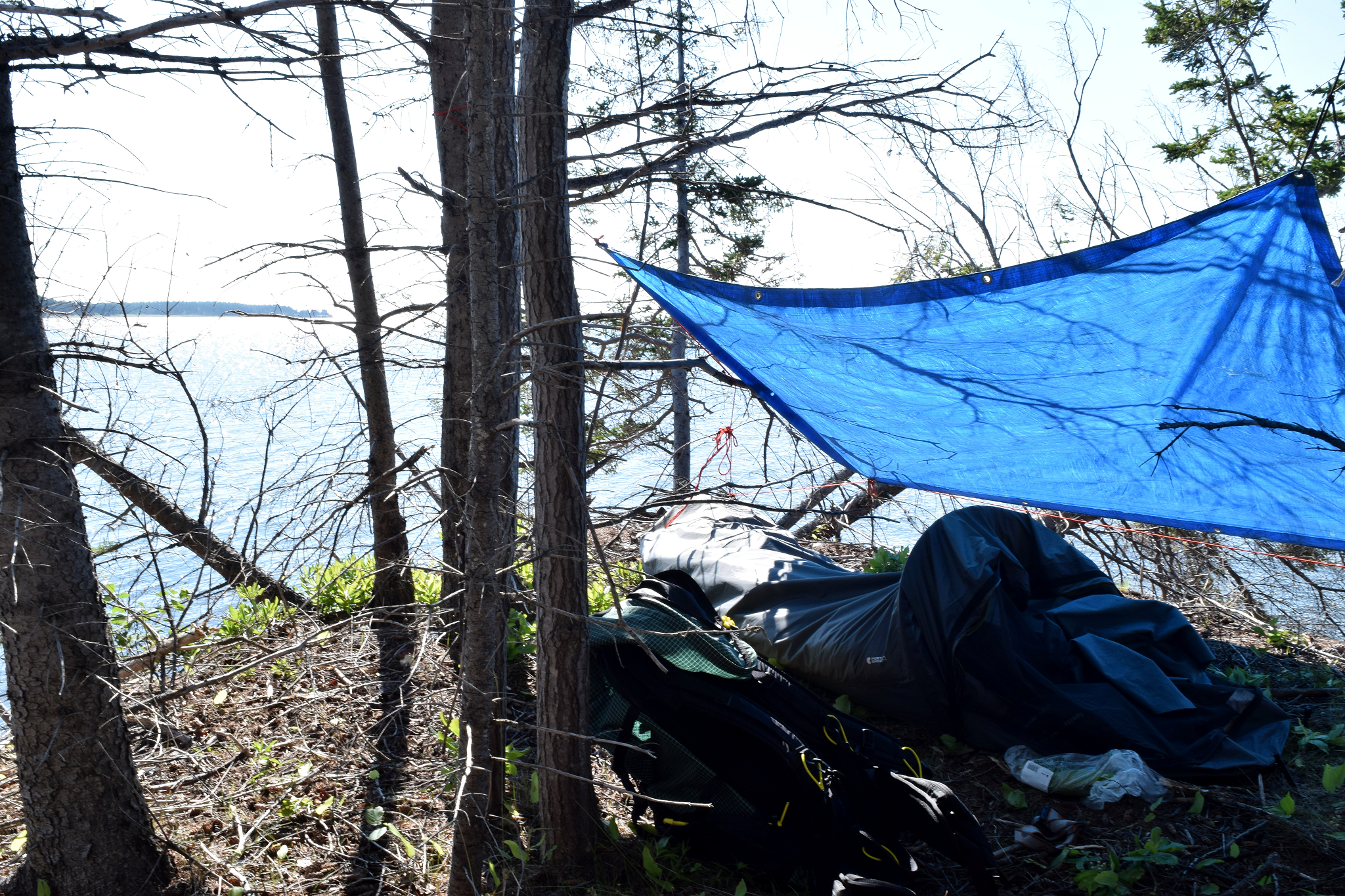