It’s good to be back in my home mountain range. 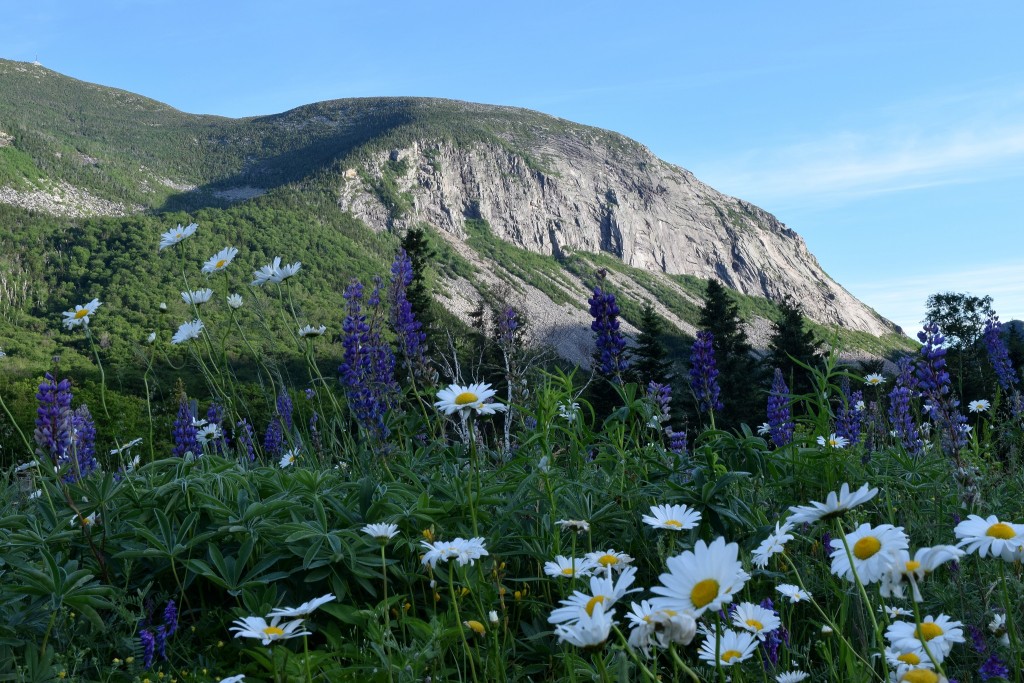 Wildflowers on the roadside as you approach Cannon Mountain in Franconia Notch State Park. This is the mountain the Old Man in the Mountain used to cling to. It’s gone now, sadly the beloved rock formation fell away from Cannon Mountain, but its grizzled visage still is carved into the quarters, found on the license plates, and silhouetted on the street signs throughout New Hampshire. Jimmy pointed out that’s it’s a marvel we got to see the Old Man in our childhood, and when we’re old ourselves someday, we will be old enough to have actually seen the real thing.

Jimmy and I woke up at 4AM and were on the road by 4:30 to New Hampshire. It’s so enjoyable driving in that hour of the morning, especially to the mountains. These mountains in particular hold some magic power over me, these were the first mountains I ever hiked in. Appalachia, it’s good to be home. 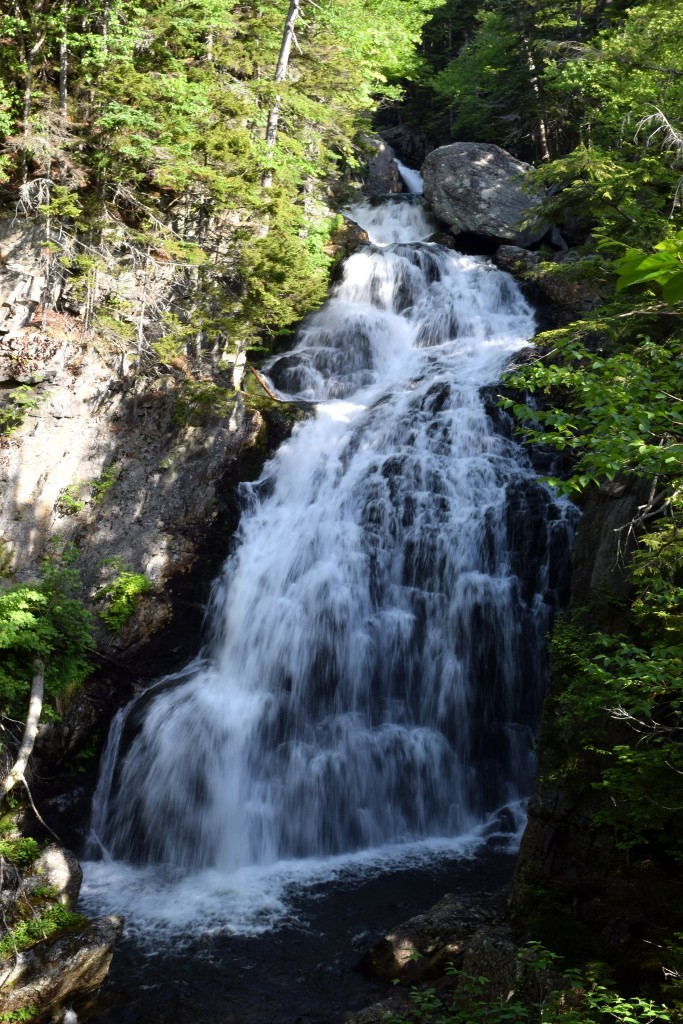 There’s this fine waterfall right away as you begin the ascent of Mt. Washington, on the Tuckerman’s Ravine trail

One thing I can’t seem to get over is how wet everything is here, after living in the desert for a while now I really feel the moisture. The east is simply a humid place, and I appreciate it, it feels wonderful on my skin. The early morning ride was exciting as the sun rose though breaking fog and golden mist. Once in New Hampshire the undulating countryside was densely green and well forested. At some point, north of Concord, the highway changed, became less traveled. To leave the cities behind in favor of the mountains again was refreshing! Simple mountains rose up to where they met the alpine zone, these were the Presidentials. 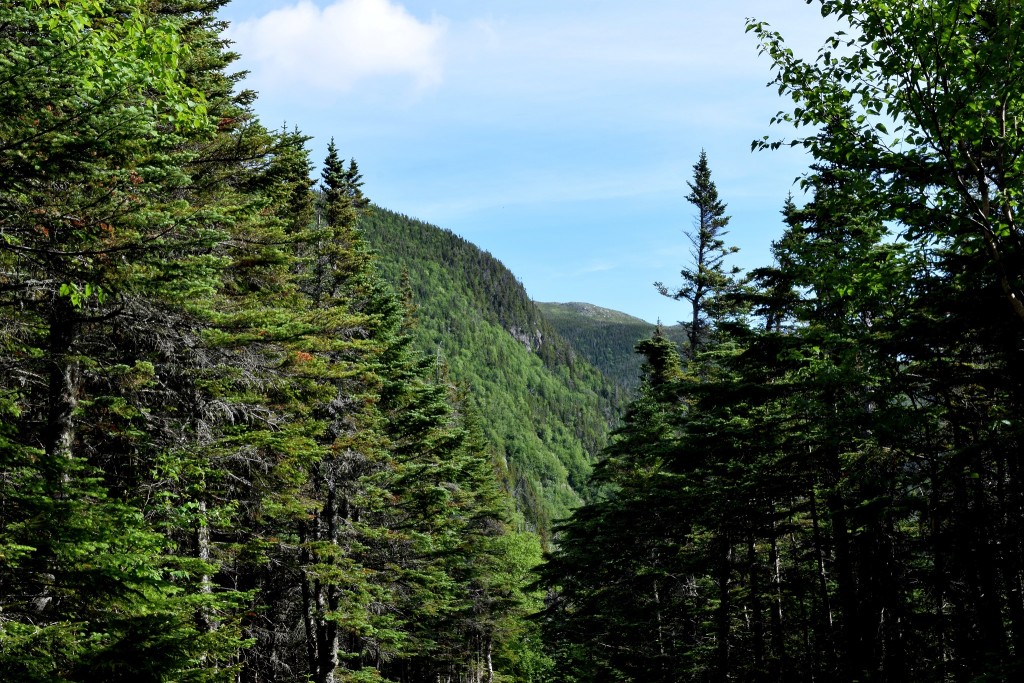 Climbing the Tuckerman’s Ravine trail, then we took the Lion’s Head trail cutoff

We were ready when we got out of the car. He had gotten about four hours or sleep or less, but I couldn’t have gotten more than two. We chugged some coffee and it seemed to do the trick. We were going to attack the day. We booked it up the trail and made some friends before hiking passed them. We hiked passed everyone, flying up the mountain. I was highly over-caffeinated and talking up a storm, and Jimmy was keeping up just fine. We couldn’t stop hiking fast because there was so many people, we had to keep racing and keep passing more and more. 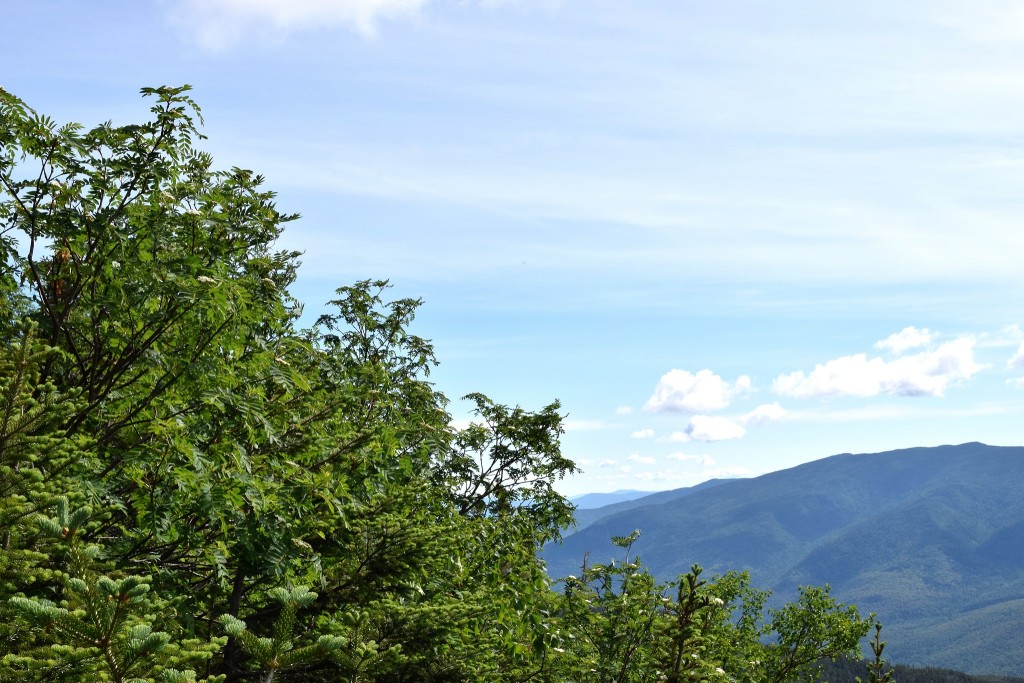 It’s nice to see the leaves in Appalachia 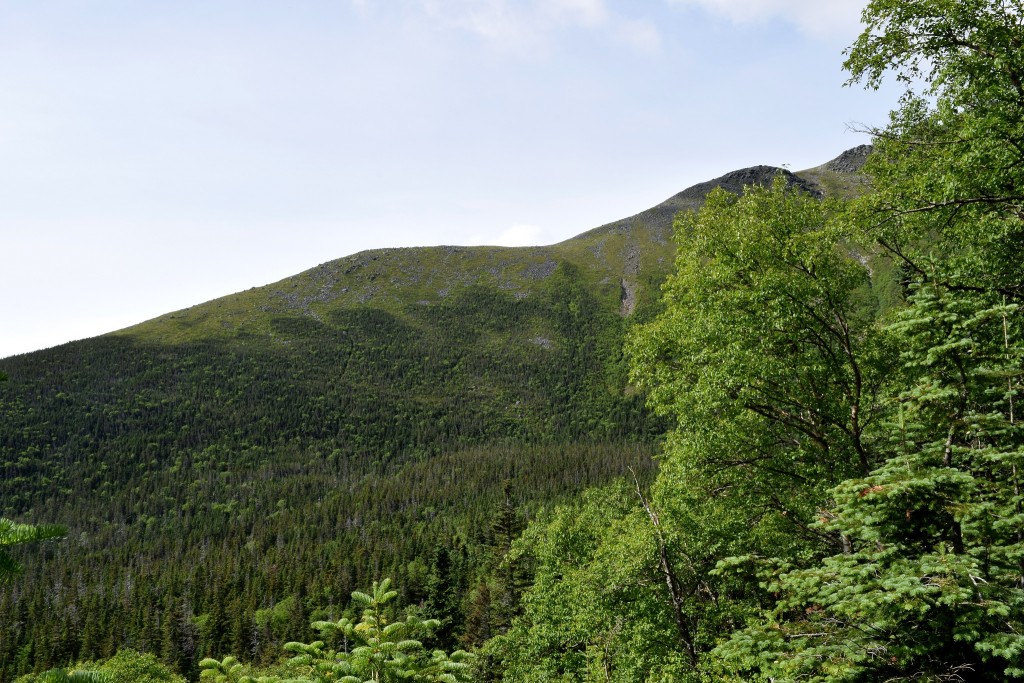 The View climbing up the Lion’s Head trail

Only a little snow left in late June 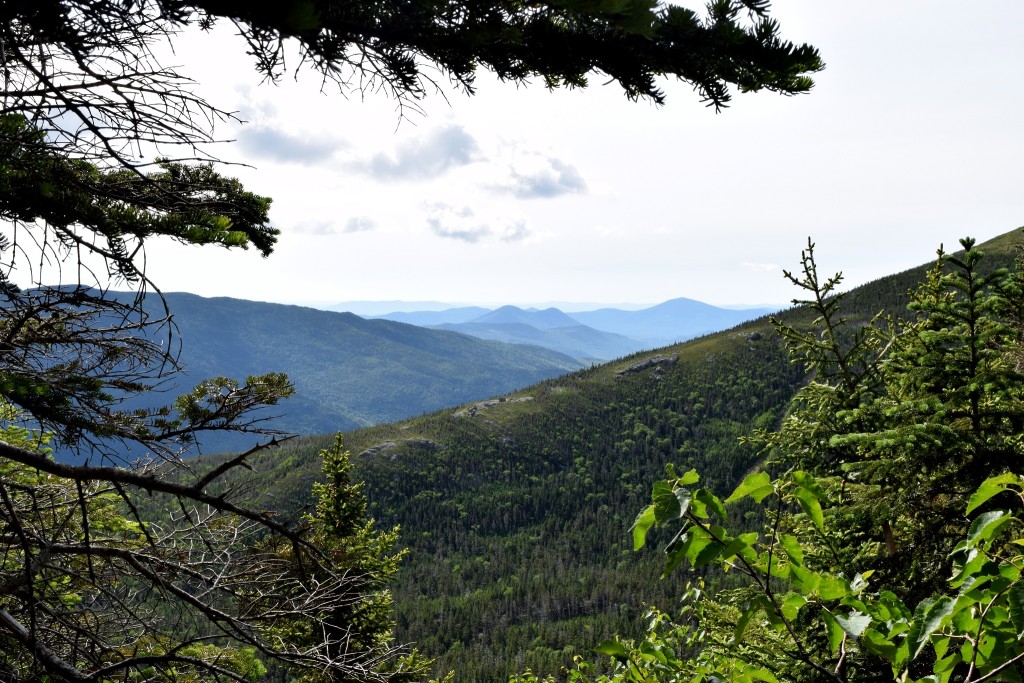 It was still early, probably 9AM and we had now cruised passed everyone except the real early risers. Basically we had the trail to ourselves. The views gradually became stunning, then all at once we crossed above tree line and into the alpine zone.  After the trail left the trees the air had become cool and turbulent, afternoon clouds began to gather, all of New Hampshire spread out open beneath us. The views from the Eastern alpine zones are excellent, the space is unobstructed. The distance changed all the hills blue as they rolled away from us. 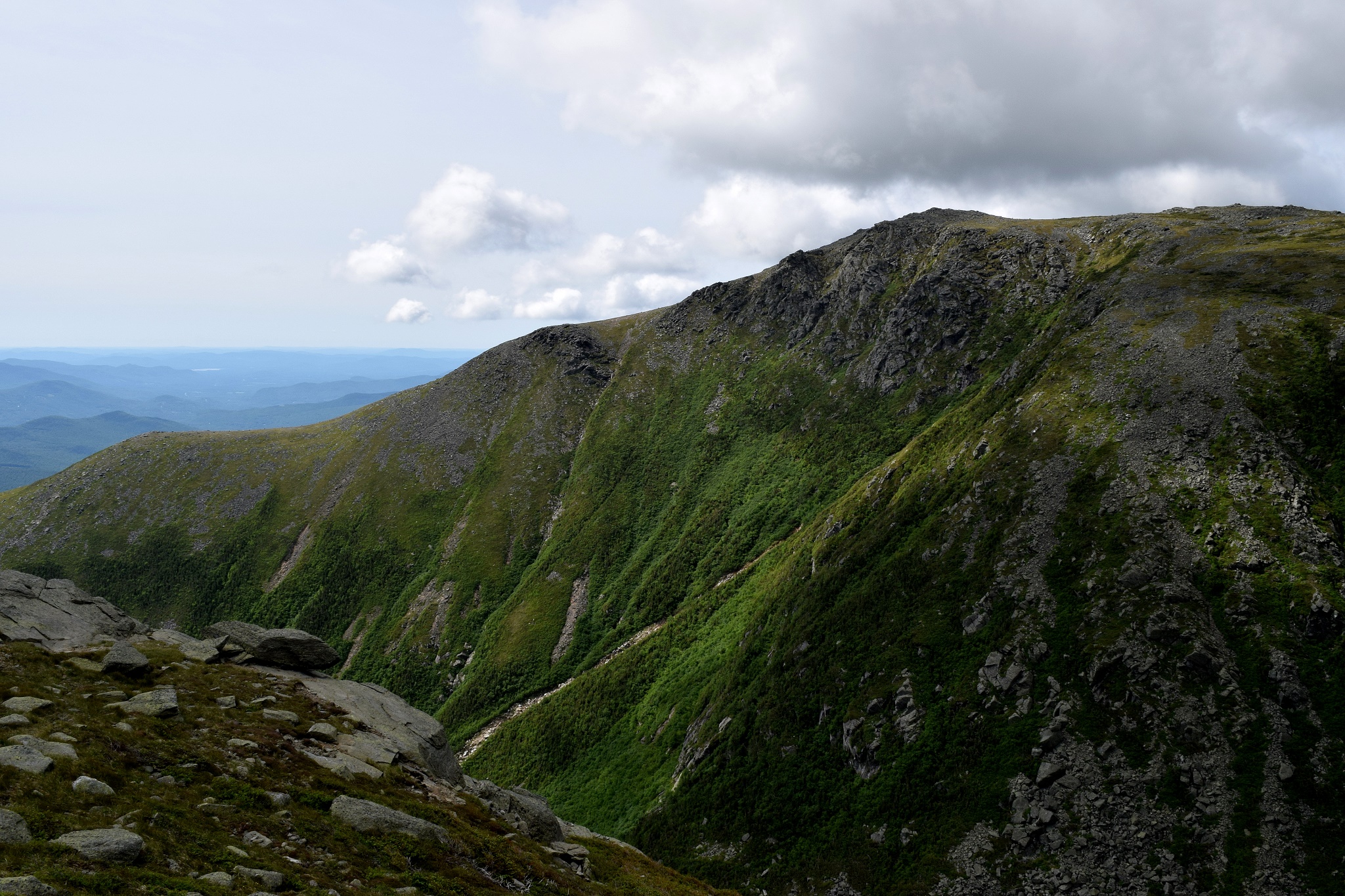 The clouds played with the light today, we thought it would rain but it waited for us to get down. 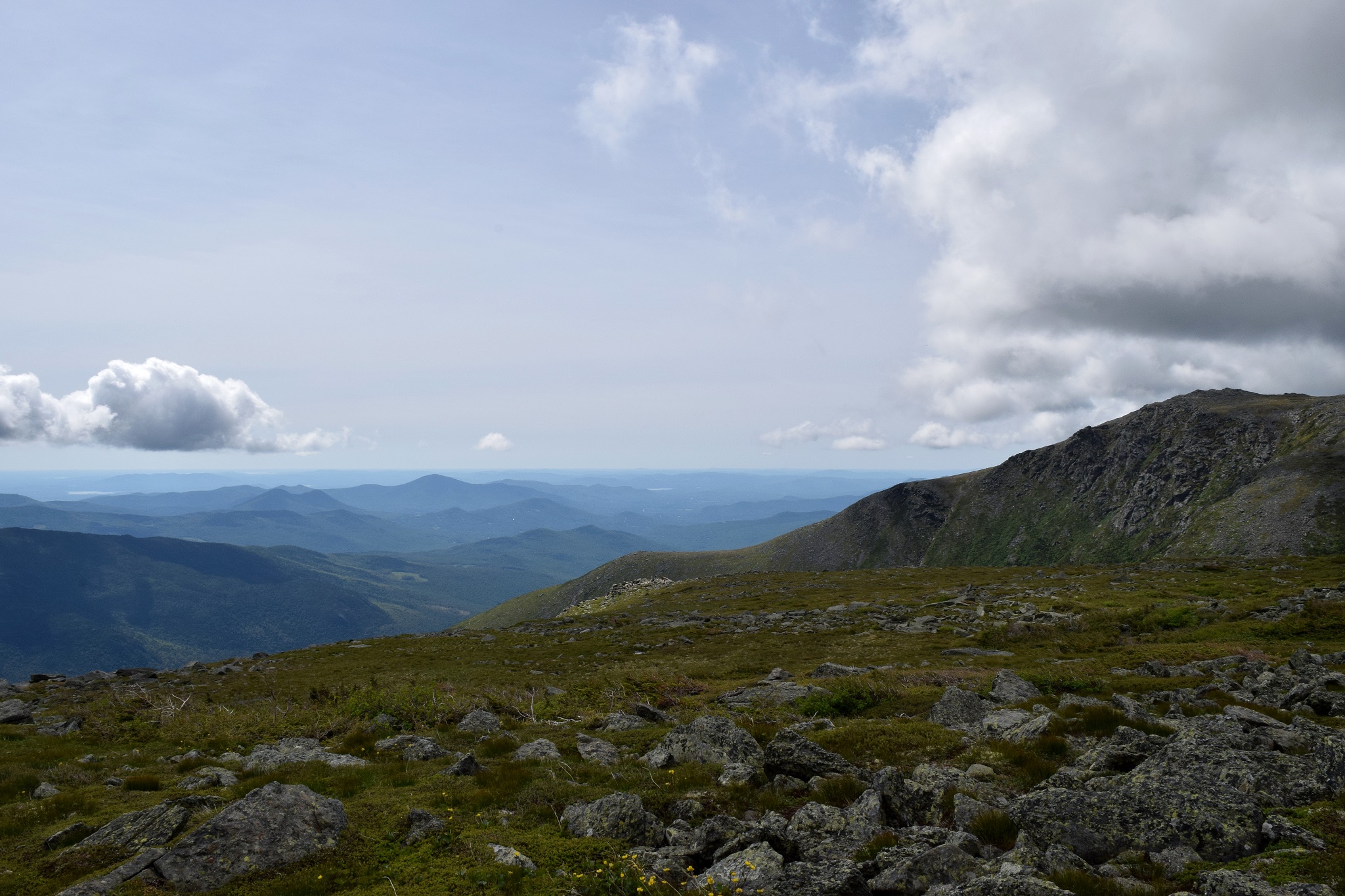 There’s something about the alpine zones in the White Mountains. To me, no alpine terrain out west compares on a few factors. I’m not sure exactly what it is I feel present here that is not out there. Different smells, different plants, strange green lichen. It is the first alpine environment I ever felt when I was young, and something about it is burned into my subconscious that this is what a true alpine zone should feel like. 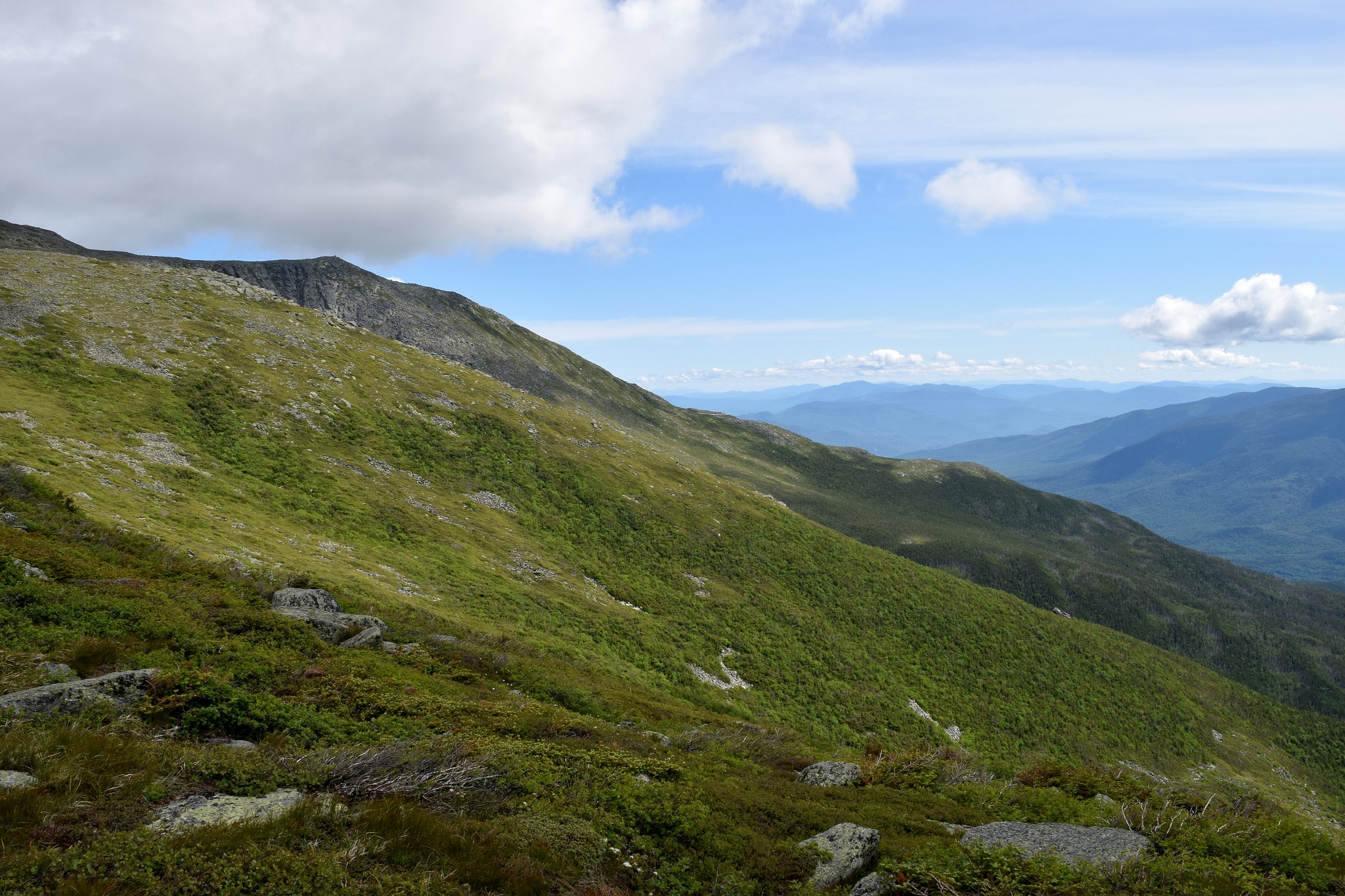 Once ahead of everyone we decided we had enough time in the day, we took a fork off the Lion’s Head trail and onto the Alpine Garden trail. It was a nice detour, we thought, “Hey let’s climb Jefferson first and then go up Washington” 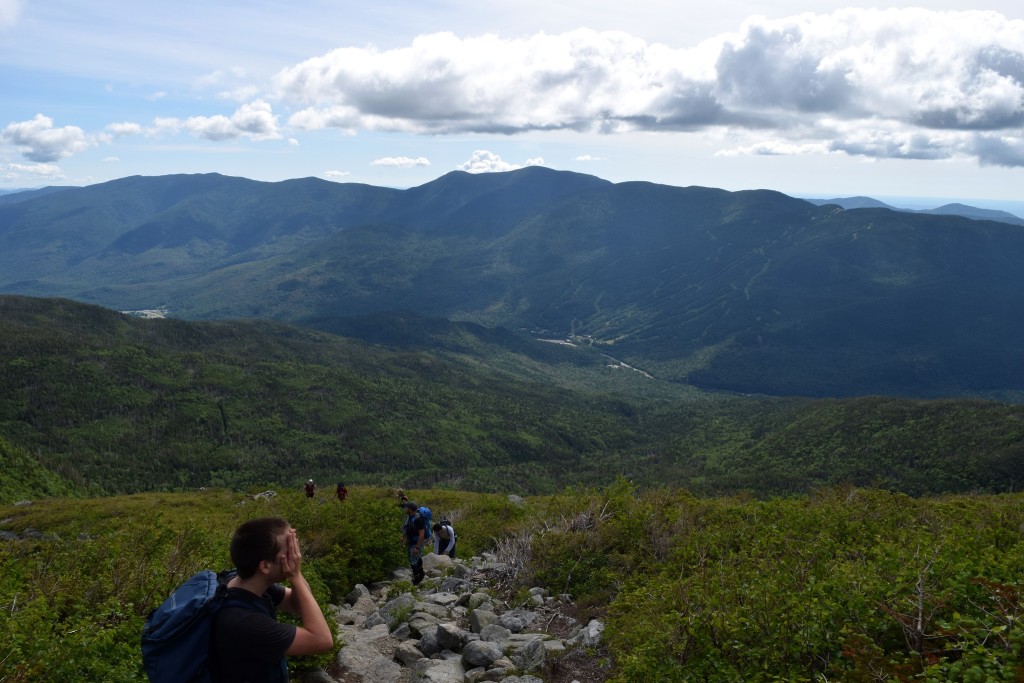 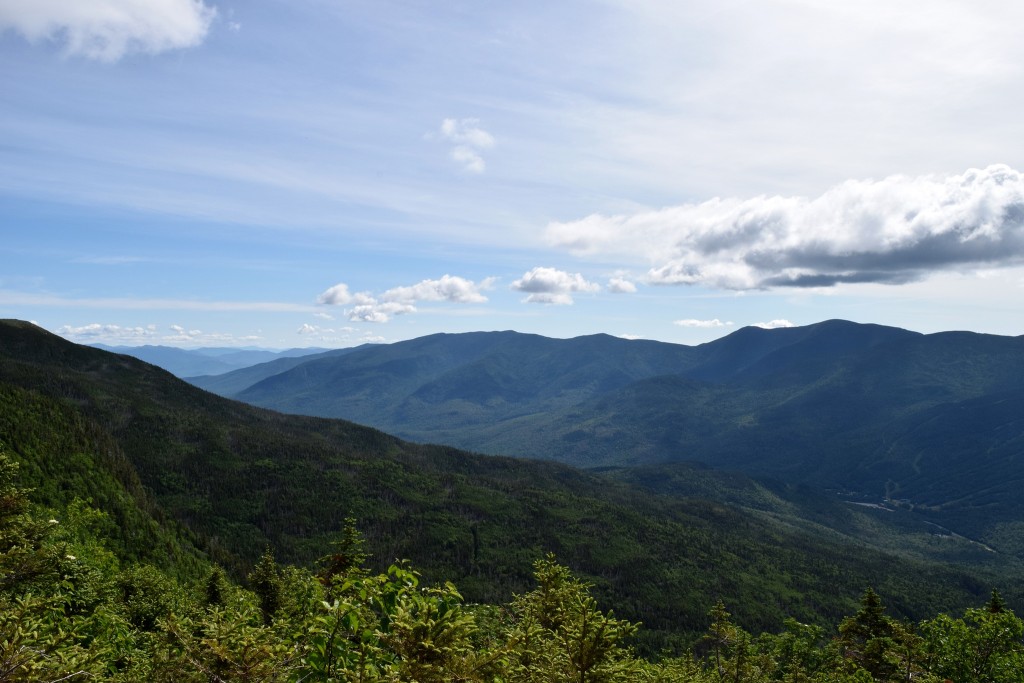 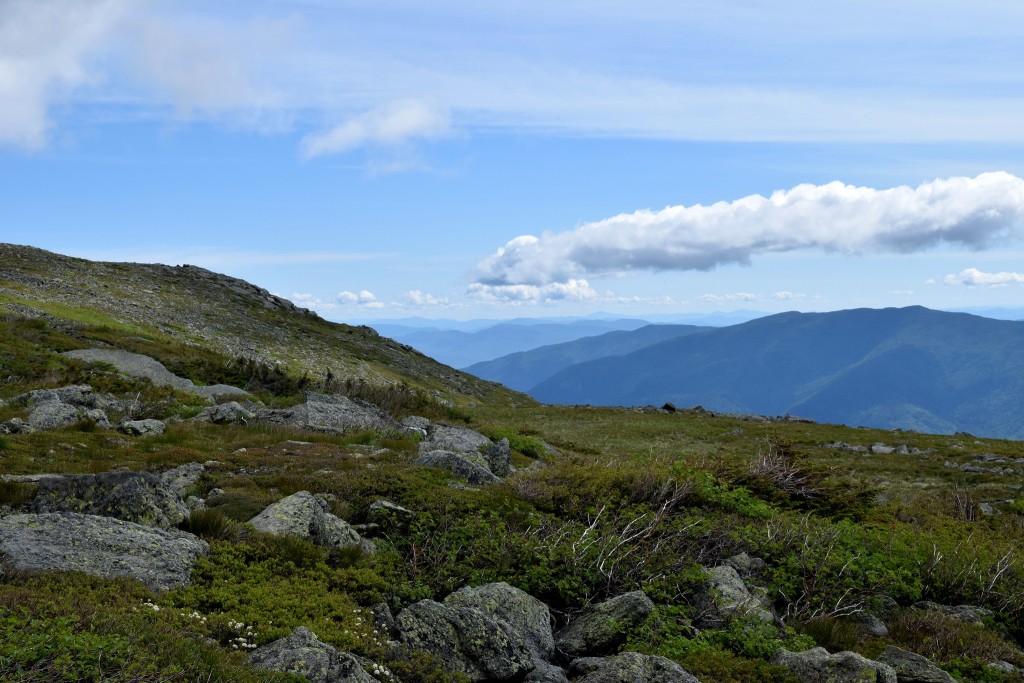 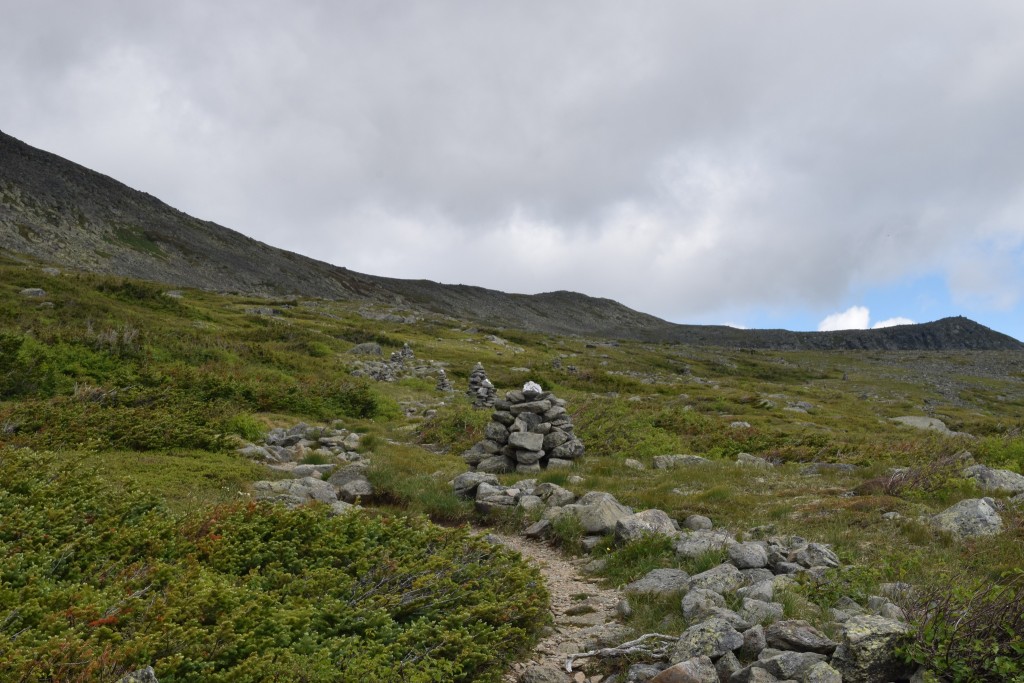 Cairns on the Alpine Garden trail

We crossed the alpine garden and could see Jefferson out there. Very suddenly, the caffeine wore off and we became unexpectedly fatigued. No matter, brush it off, back to focusing, we’re going up Washington. We climbed the lichen crusted boulders the rest of the way to the top, the trail was quite strenuous the last bit of the way. 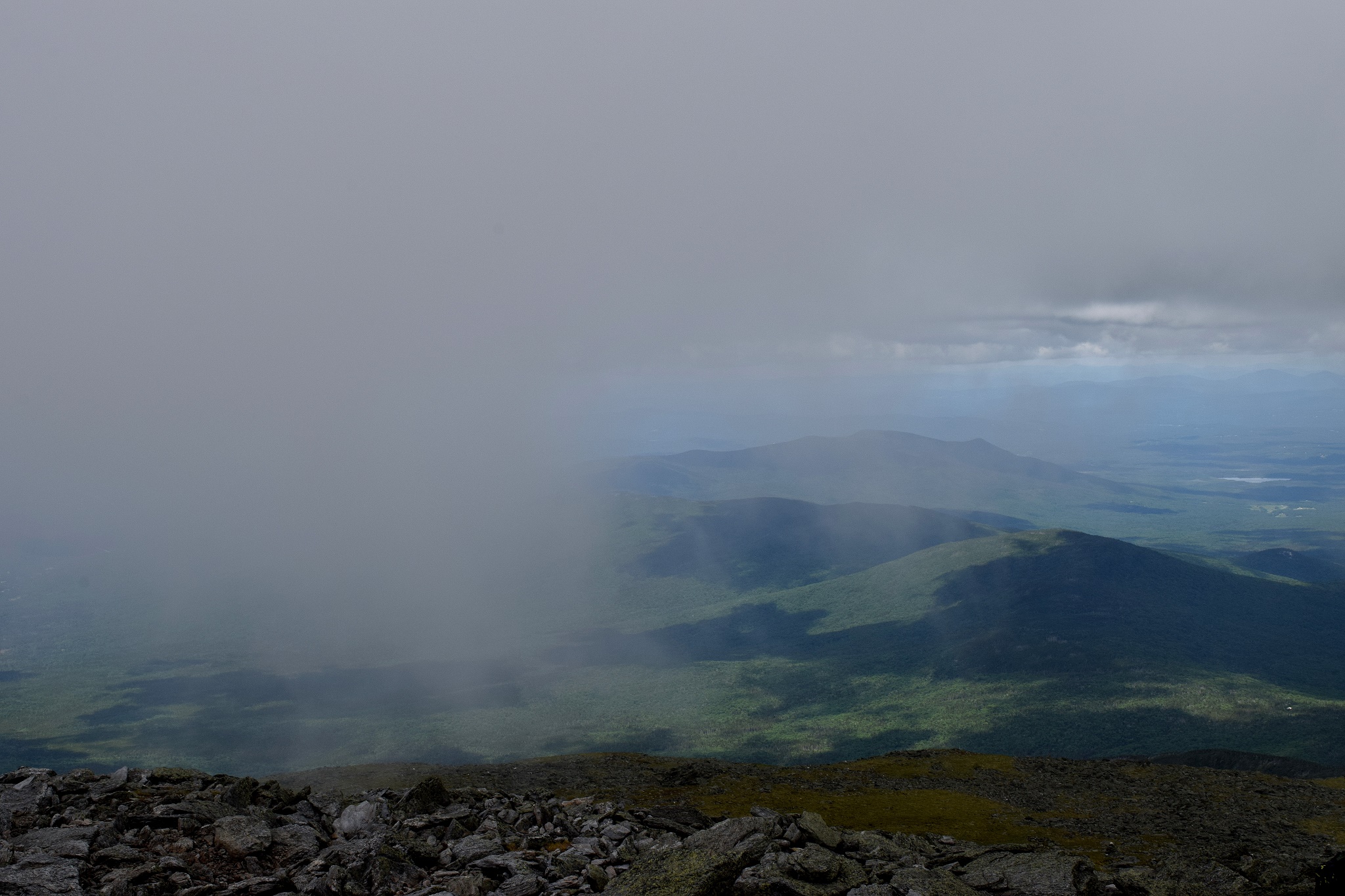 Clouds poured over us when we made the summit, the view would be obscured for a few moments and then come back 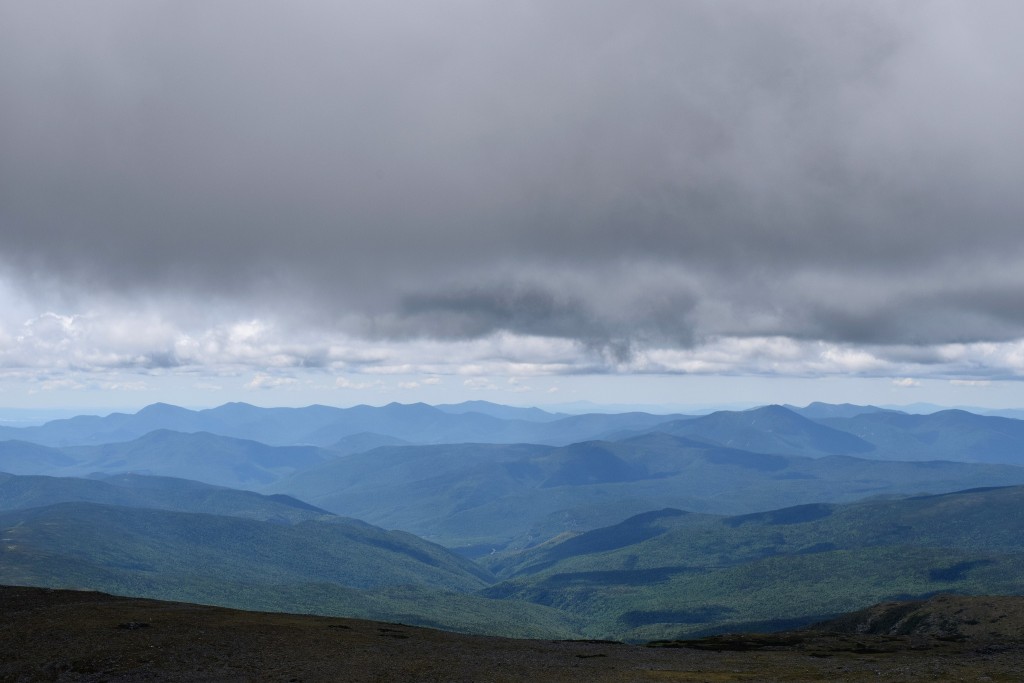 View of the country 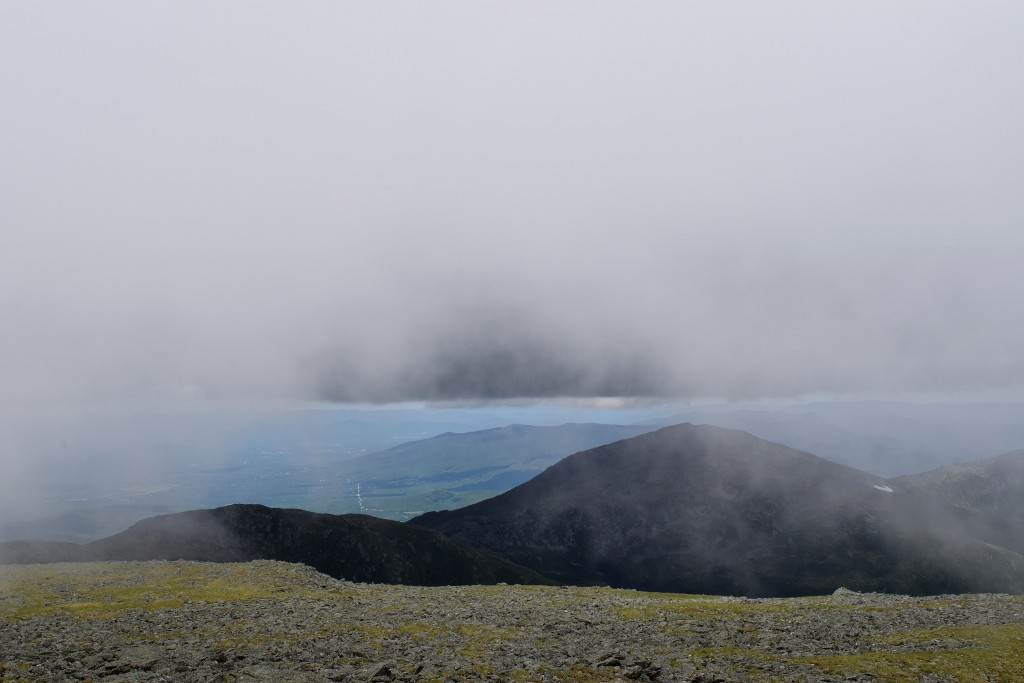 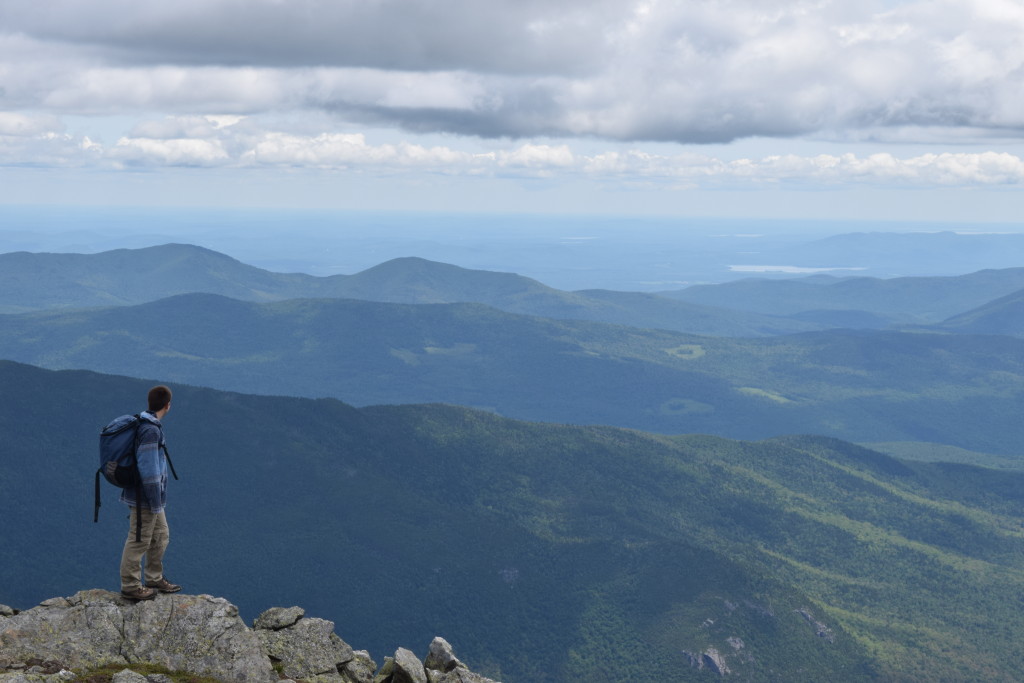 We had a perfect day 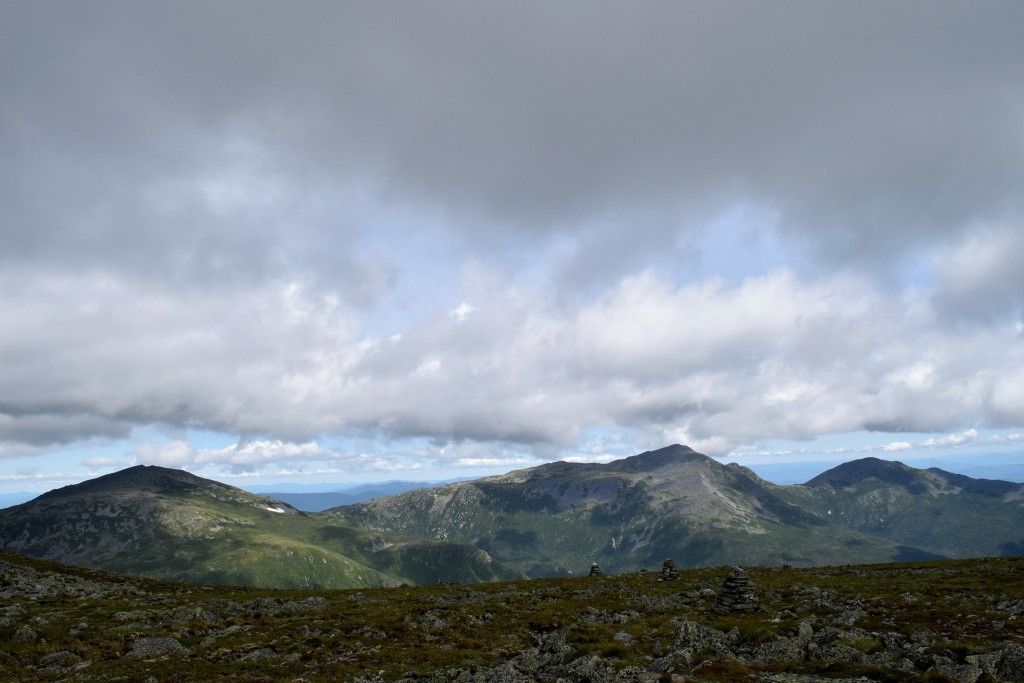 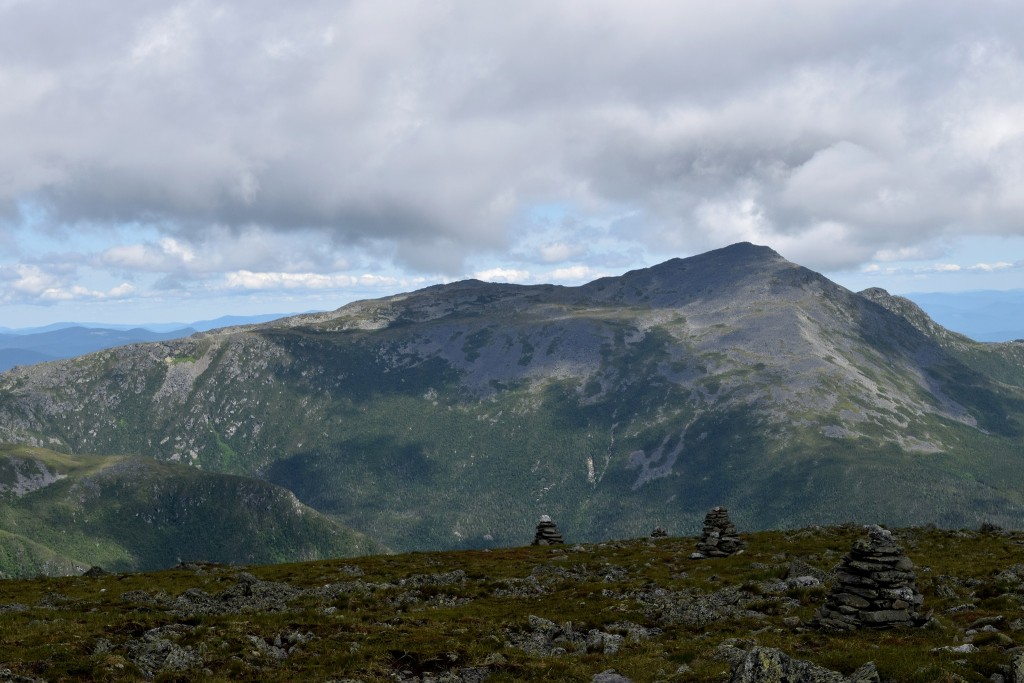 Even though Mt. Washington is the tallest mountain in all of New England, it has a road to the top. It’s actually quite an impressive road, maybe a good bike ride one of these days. Of course the top of the mountain was a ridiculous crowd of people, there’s a restaurant there. Jimmy is becoming a denizen of the city lately, he doesn’t usually mind crowds and even he found this place obnoxious. There is a train up there… “There’s not supposed to be this much noise on top of a mountain,” he said. We didn’t stay long and plunged down, seeing all the various people we had passed on the way up. We didn’t recognize some of them but they all recognized us. I had my big long hair flowing in ringlets from my hat, and Jimmy, well, I think we just look funny next to each other. We’re a memorable couple of people. 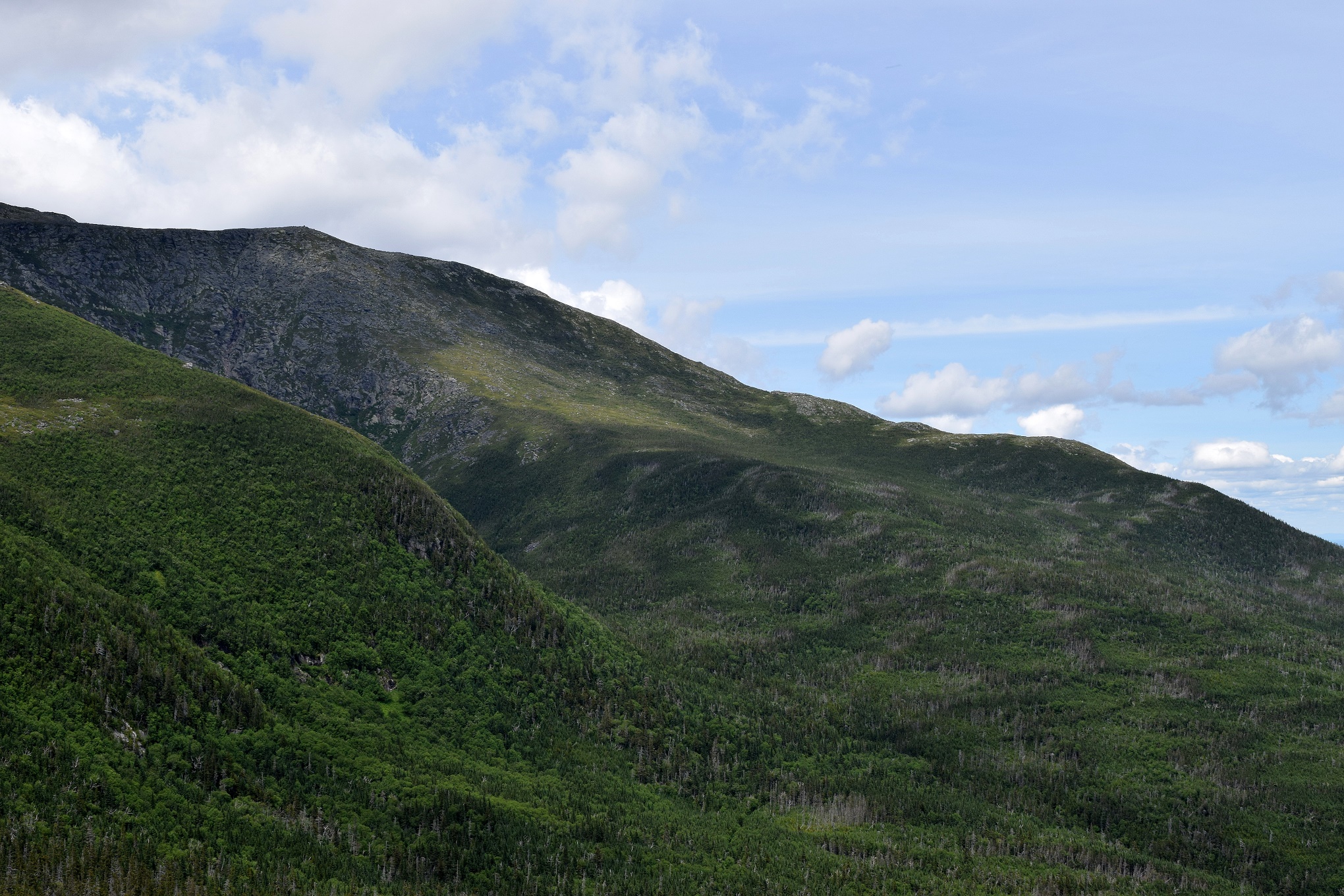 We destroyed our knees on the long descent of the Boot Spur trail. Our leg muscles were both in abundant pain for two days, more so than usual. The Appalachian mountains are actually quite hardcore. 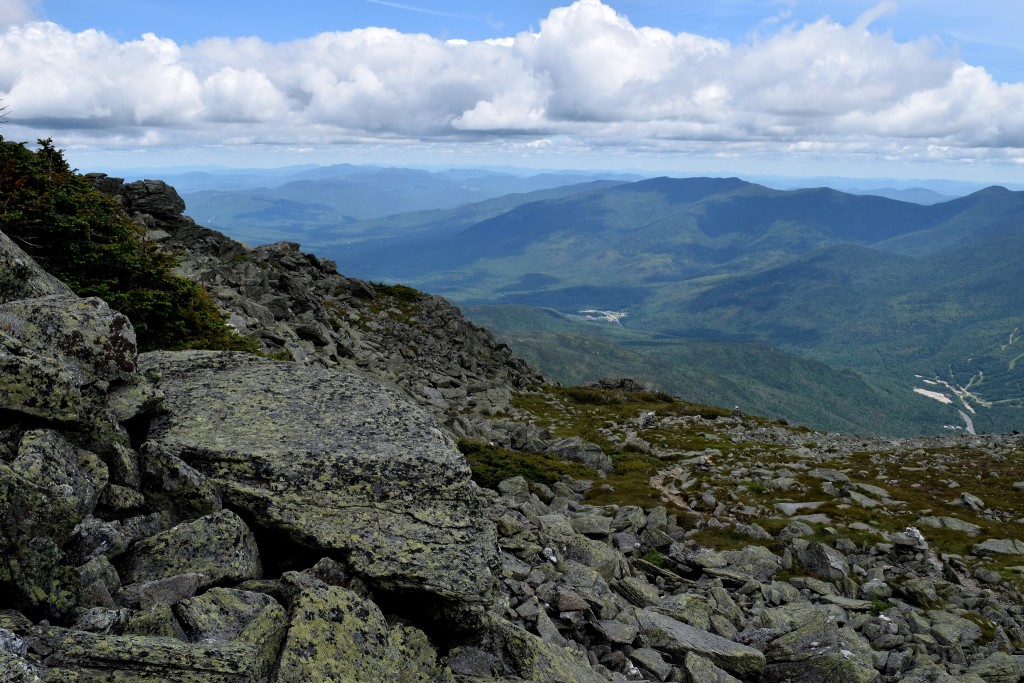 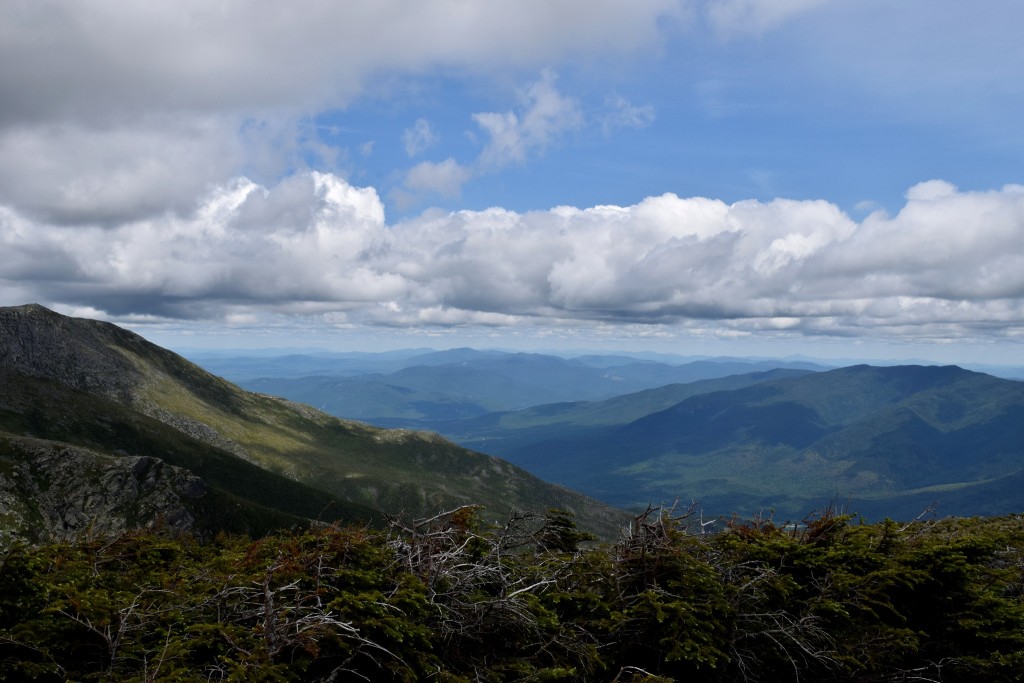 We made it back and went to Jana and Tom’s trailer in West Ossipee to pay them a visit. In the ride there I was sleepy and Jimmy said I could go to sleep if I wanted, he was driving. I fell asleep basically on command for half an hour until we arrived at the camp. It was a fun trip, looking forward to the next one. I think I’ll be biking far this week, and hopefully going on a sailing trip soon. 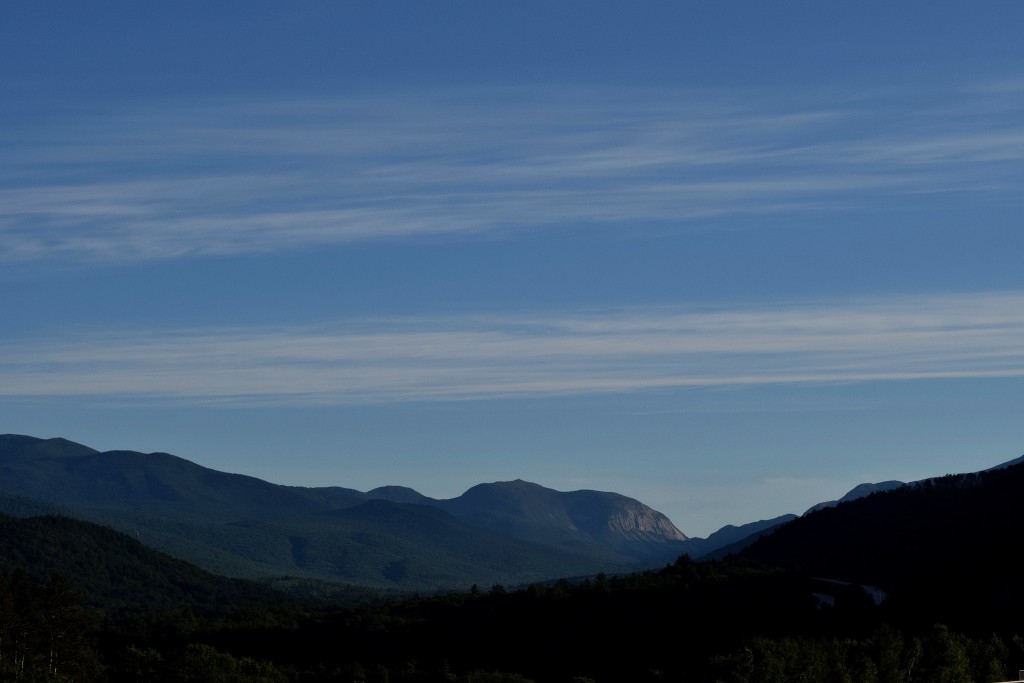