I’ve been on the road for about 2 and a half weeks now since leaving Massachusetts, and I’ve made it to Lake Tahoe, California. Today we are just relaxing, taking the day off from our really “stressful” lives. We met our friend Jada, she lives here in a beautiful cabin in the mountains where the 5 of us are just sitting around and doing art today. 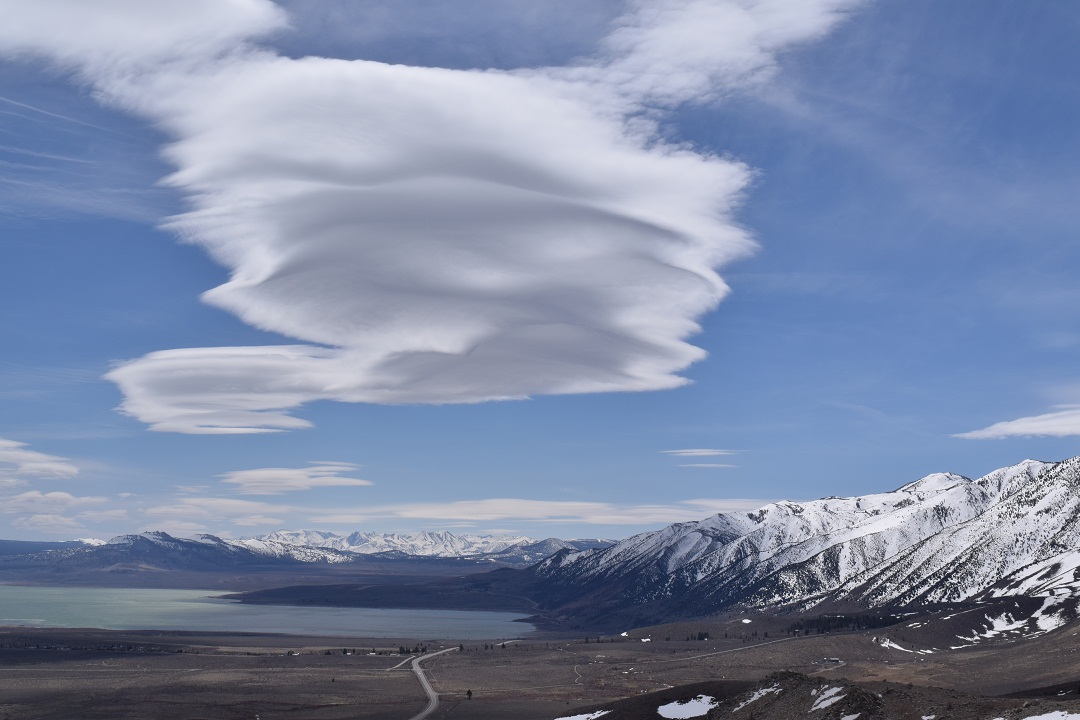 It’s amazing how much snow they have here, it’s probably more snow than I’ve ever seen in my life. It’s raining today, and still in mid-April the snow banks are above the windows of the house! Jada has a hilarious cat with a cone over its head, a very friendly dog, and plans to live here for a least another year. It’s definitely not a bad place to visit.

I have been traveling in our small gypsy caravan with my three friends Ben, Mike and Meredith. Ben’s been travelling in my car and Mike is in Meredith’s. Both our cars have four wheel drive so we’ve been able to travel some amazing dirt roads here in the Eastern Sierra mountains and the surrounding desert. This has been one of the most amazing trips of our lives so far- possibly this has been the best trip. We have just been very relaxed and completely free. 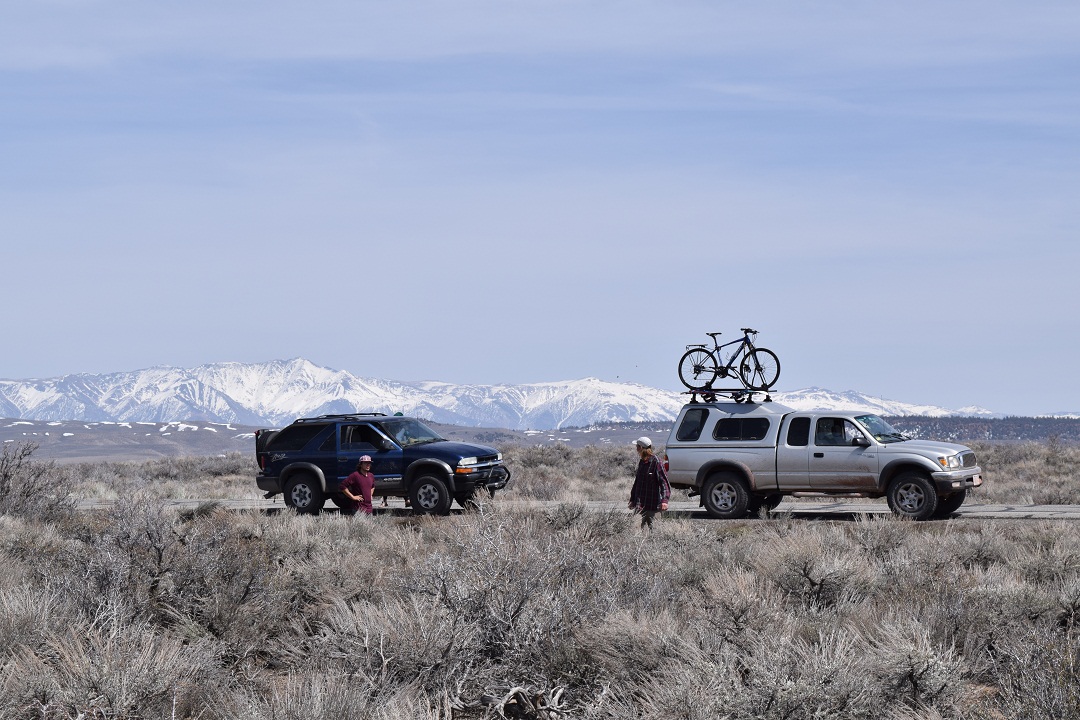 I met Ben and Mike in Hurricane, Utah, which is Ben’s hometown in the Zion National Park area. It was nighttime when I ran into them on a rough dirt road on top of Smith Mesa. 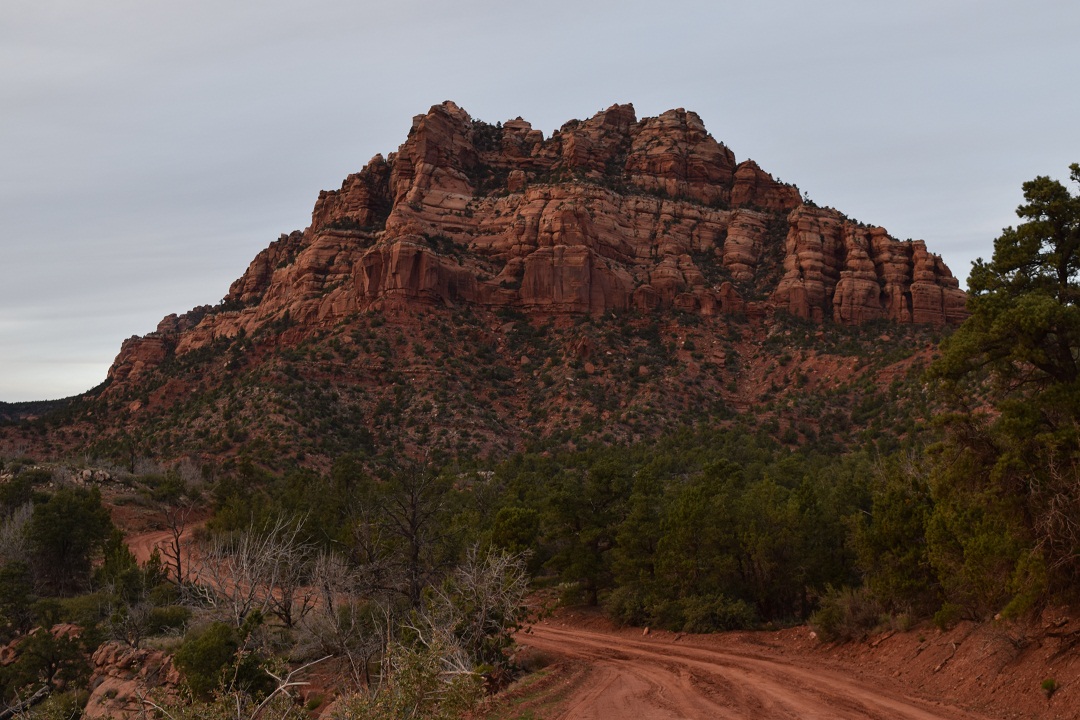 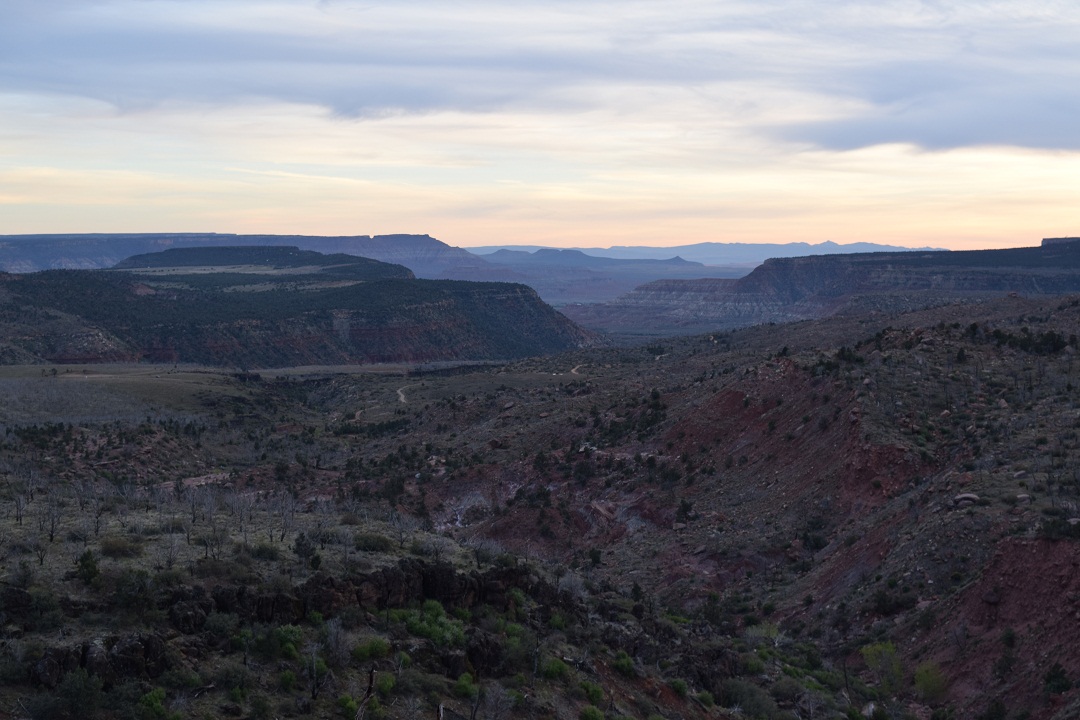 We camped there for the night and were very happy to see each other again. We’ve been travelling all over the world since we parted ways 6 months ago. They have been in Europe and in Southeast Asia, as well as a month in Colorado during these past months I’ve been in South America and Hawaii. Now it’s time for us to head north together to work for the summer.

In the morning we went rock climbing at a secret spot in a quiet canyon. That part of Utah was warm, sunny and dry, we were in a sparse forest of juniper, sage and cactus.  They taught me this hobby 6 months ago and I love it. It was one of the most beautiful and peaceful places I’ve ever been climbing.

We spent the night at Ben’s mom’s house while he said his goodbyes, and in the morning the two of them crammed into my truck along with their stuff and we left. Ben’s going to come with us as far as Washington, where he will travel on his own to go back to work in Montana, and Mike’s headed with me to Alaska.

We had a fantastic day of driving across Nevada, where we stopped and cooked on the side of the windy highway. The desert is so stark through that region and very interesting. We turned south at Las Vegas and drove to Lake Havasu, Arizona. 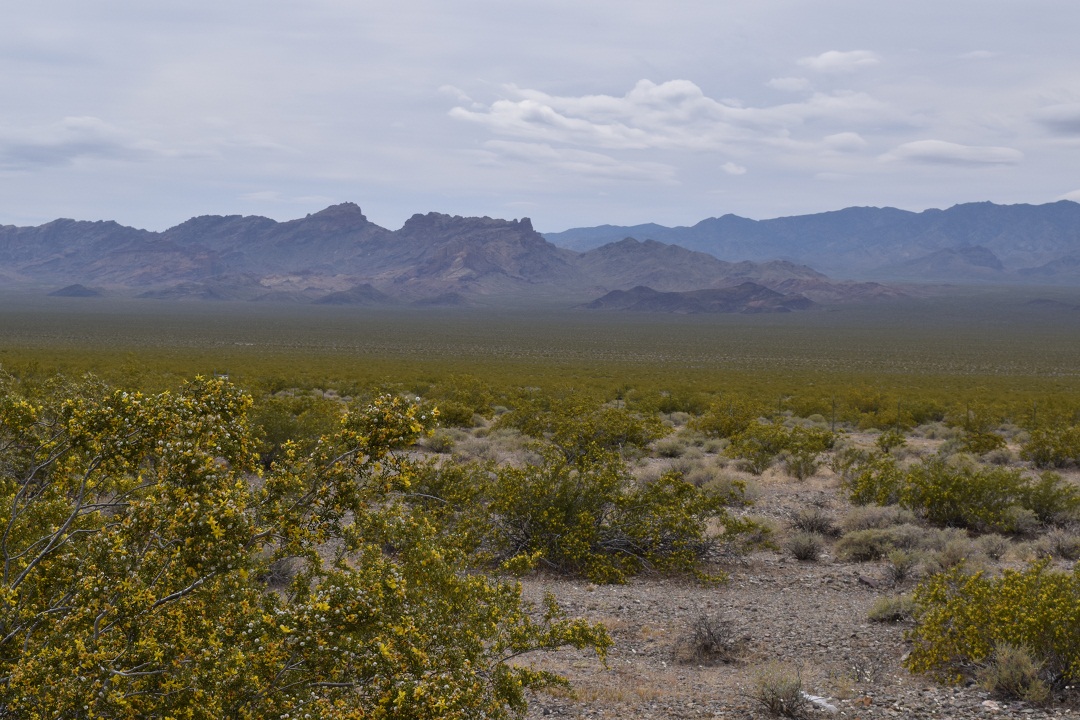 I’ve never been to Lake Havasu, but we were going to meet up with Meredith. She had been living with friends for three weeks in a trailer there. Before that, Meredith has been in Thailand, Laos, and Vietnam for 4 months. She hasn’t worked since last summer just like me, but she also hasn’t seen any bit of winter weather at all this year. She was very tan and smiling when we saw her! Meredith is coming to Alaska too.

Paige and Kevin are our friends who own the trailer. I met them in Montana where they were living in the same trailer parked on the public land in a cold forest beneath the mountains. They moved it to the middle of the desert, and found themselves a secret spot to live off the grid near Lake Havasu.

Their life is not necessarily easy, but its paradise, living in an extremely beautiful and excessively warm spot for free on the BLM land. They power their whole trailer with solar panels they bought for only 100$. It was 90 degrees there, and the warm air felt incredible. The spot is also within walking distance of the Lake Havasu lake shore, and it’s nice to have water so near in the desert. Paige and Kevin are inspirational people. 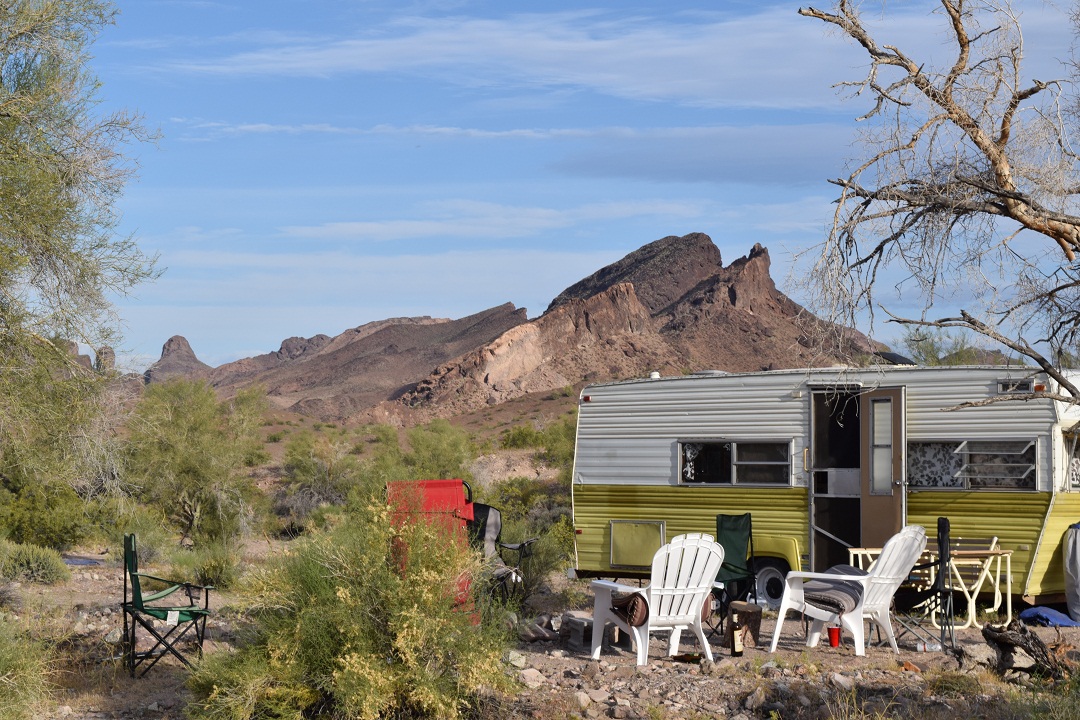 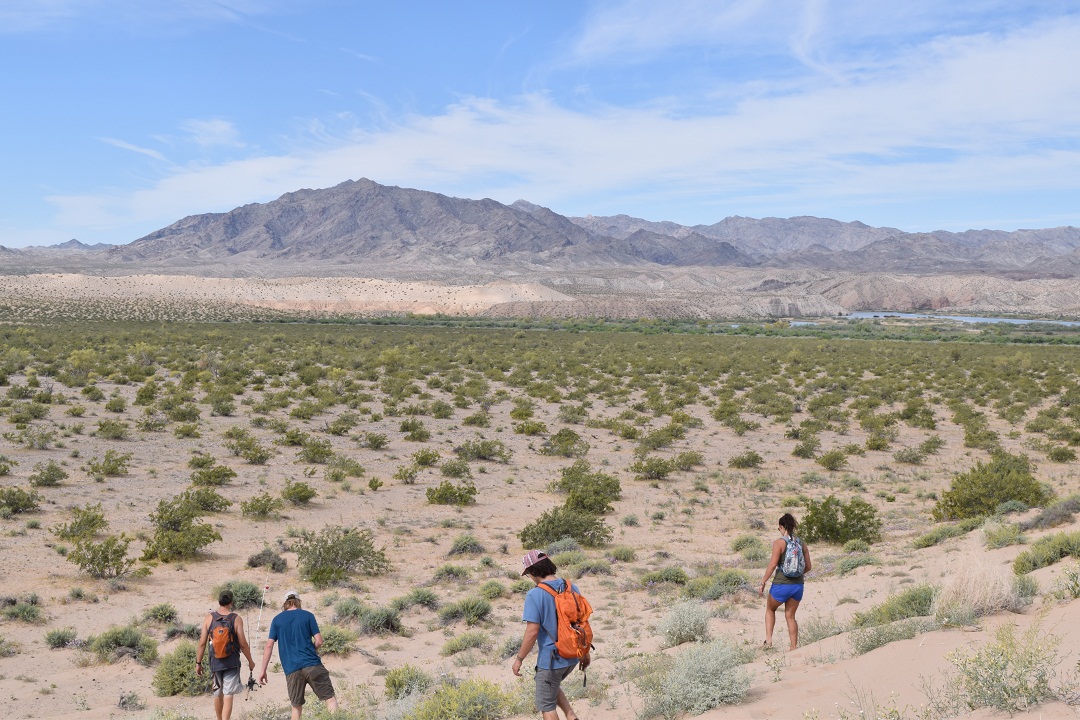 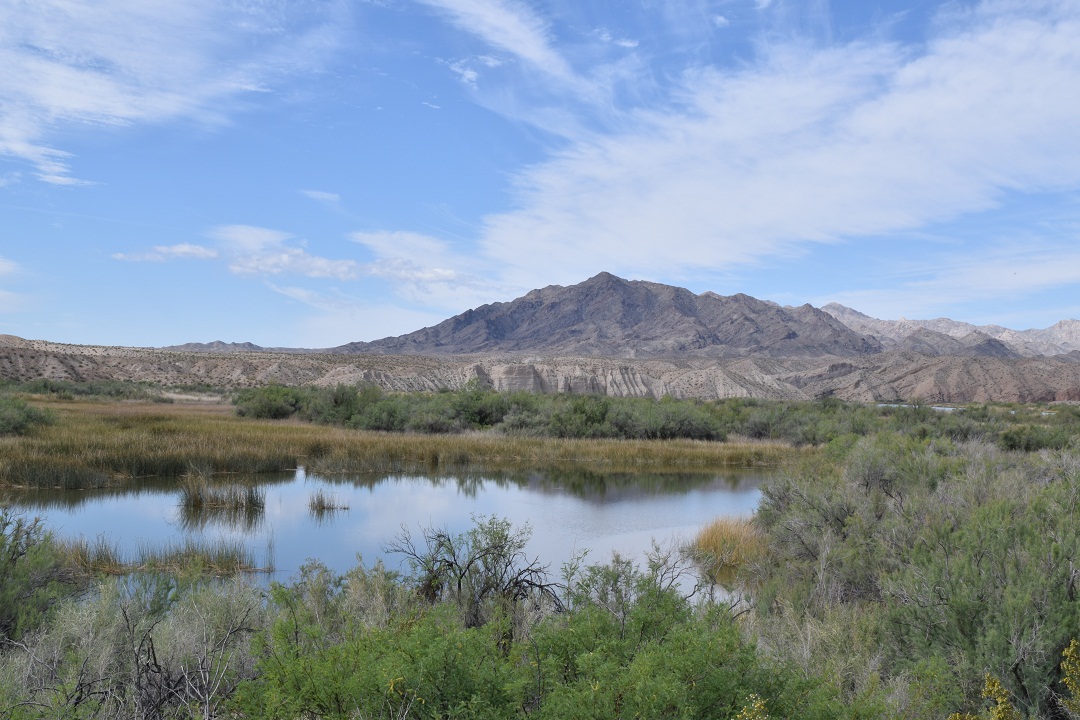 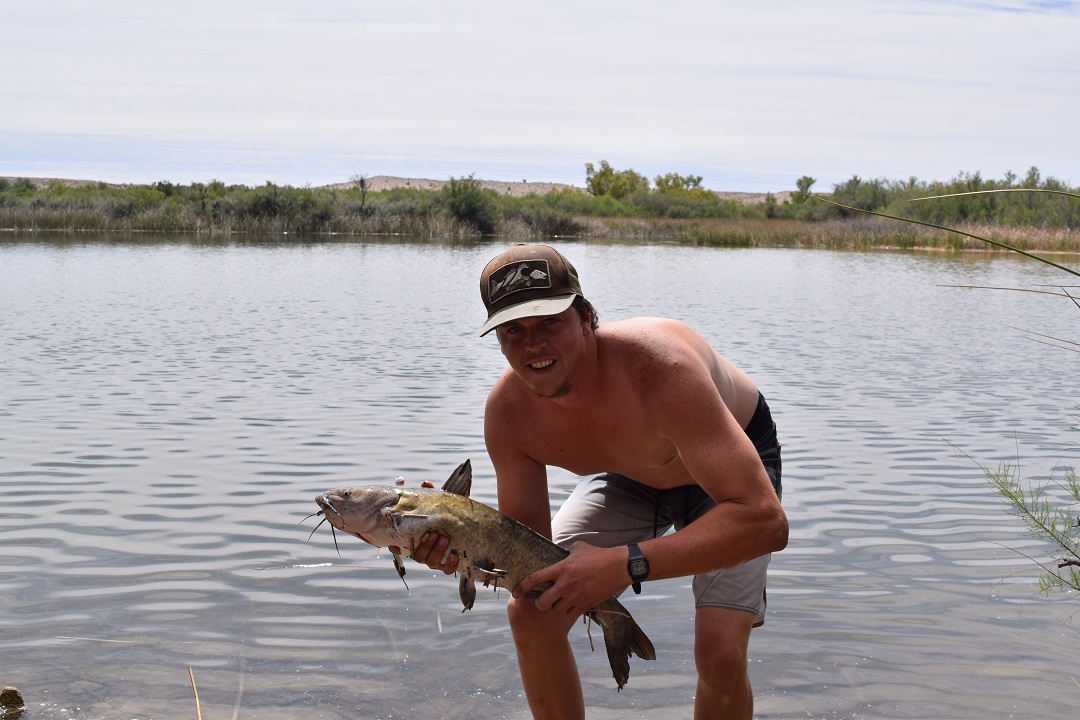 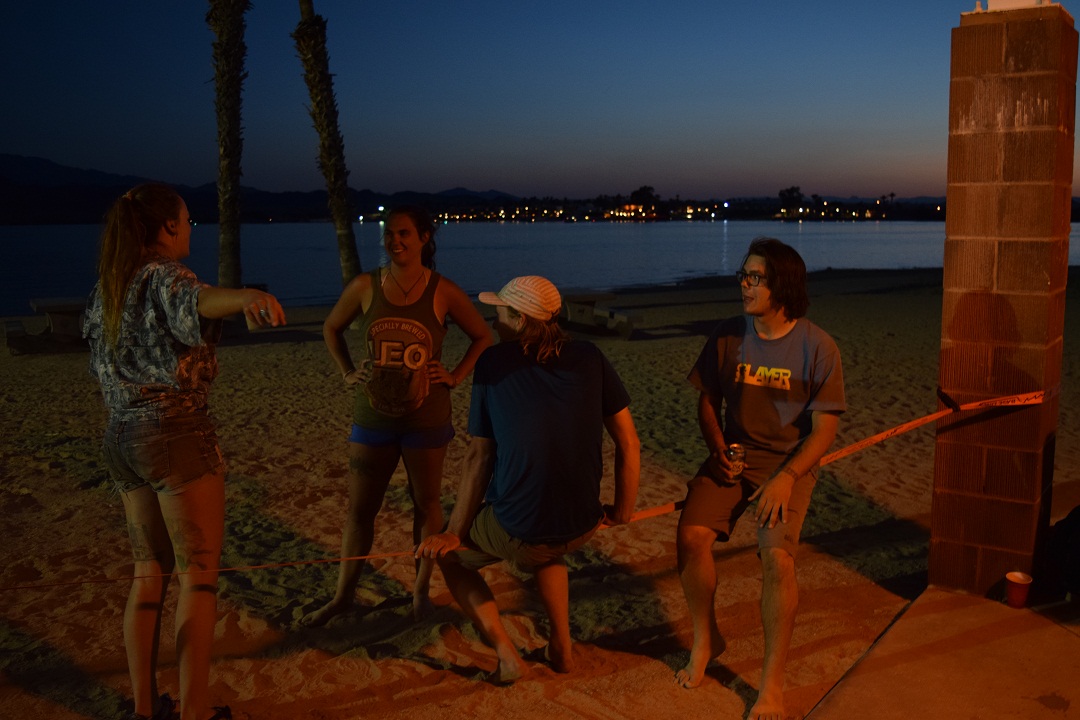 We camped two nights there, and went fishing with Kevin. He caught an enormous catfish as well as a perch.

We partied on the beach with them and other friends, and we had a good volleyball game. Mike setup his slackline, which is an extremely fun sport where you basically try and tightrope-walk on a strap. We’re going to keep setting up this thing everywhere and we’ll have our travelling circus soon enough.

The four of us left Havasu and drove to Red Rocks in Las Vegas. We camped there in the Spring Mountains. It was cold at night and Meredith was shocked to feel it for the first time in a while. We all know it will be pretty cold in the north! It might become a tough life when we get to rainier places, but the desert has been kind to us.

We went the next day to Death Valley, where we hiked around and camped in a surreal spot in the remote south part of the valley. The mountains were hot and stayed warm all night, they were also many beautiful colors. The moon lit the desert like day all night. 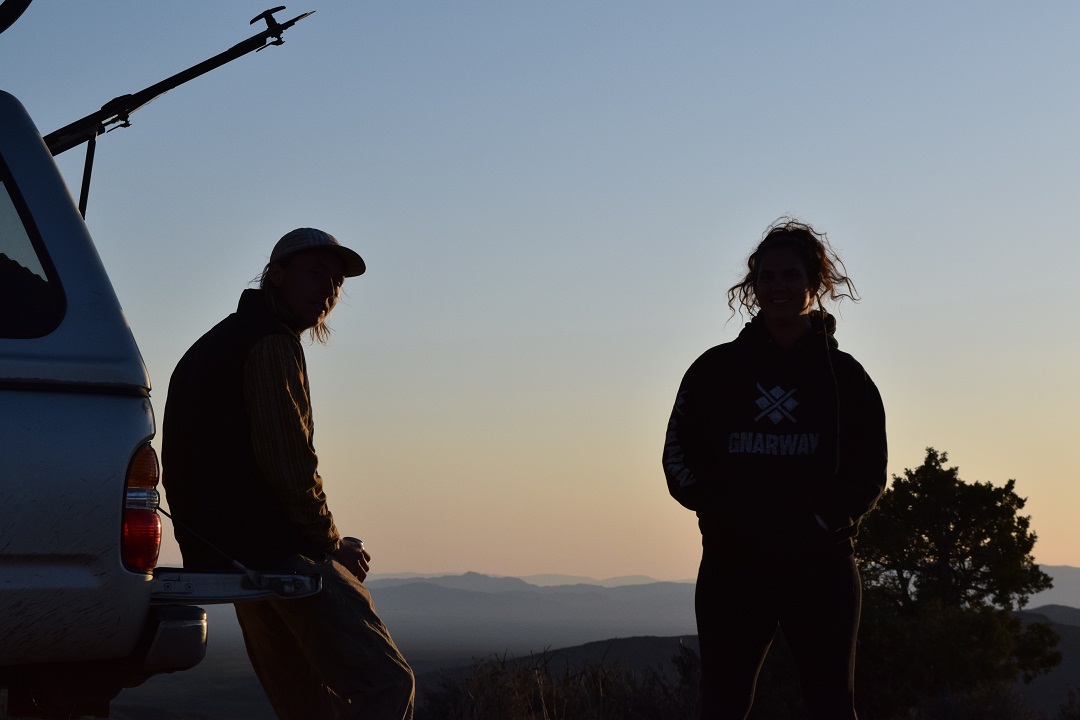 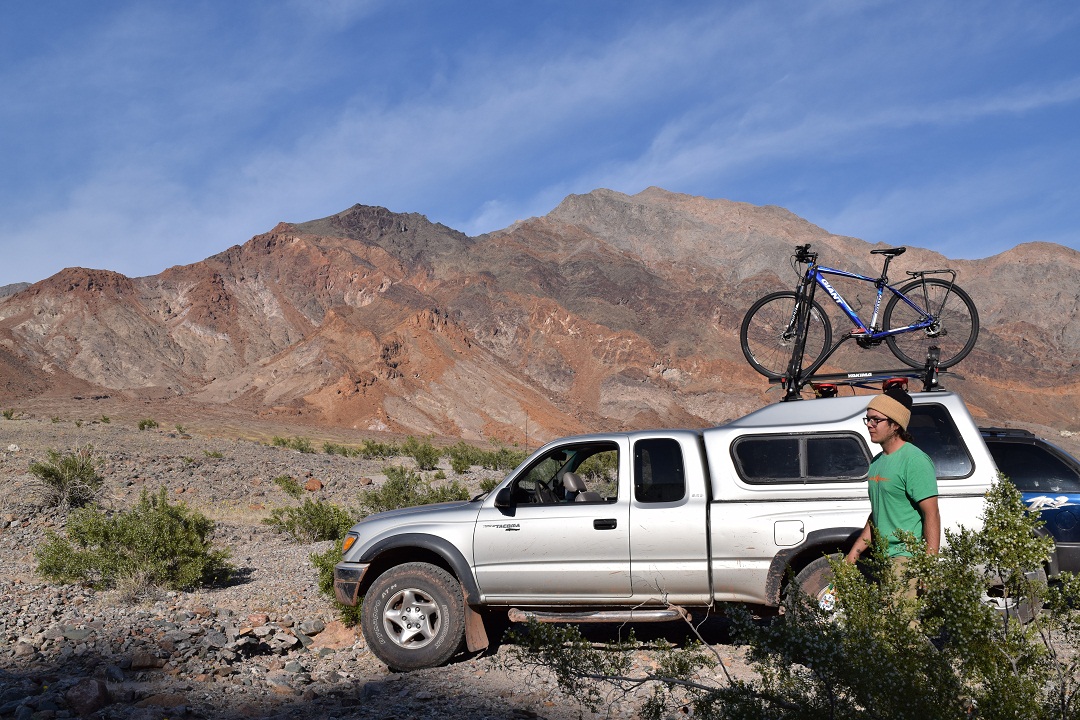 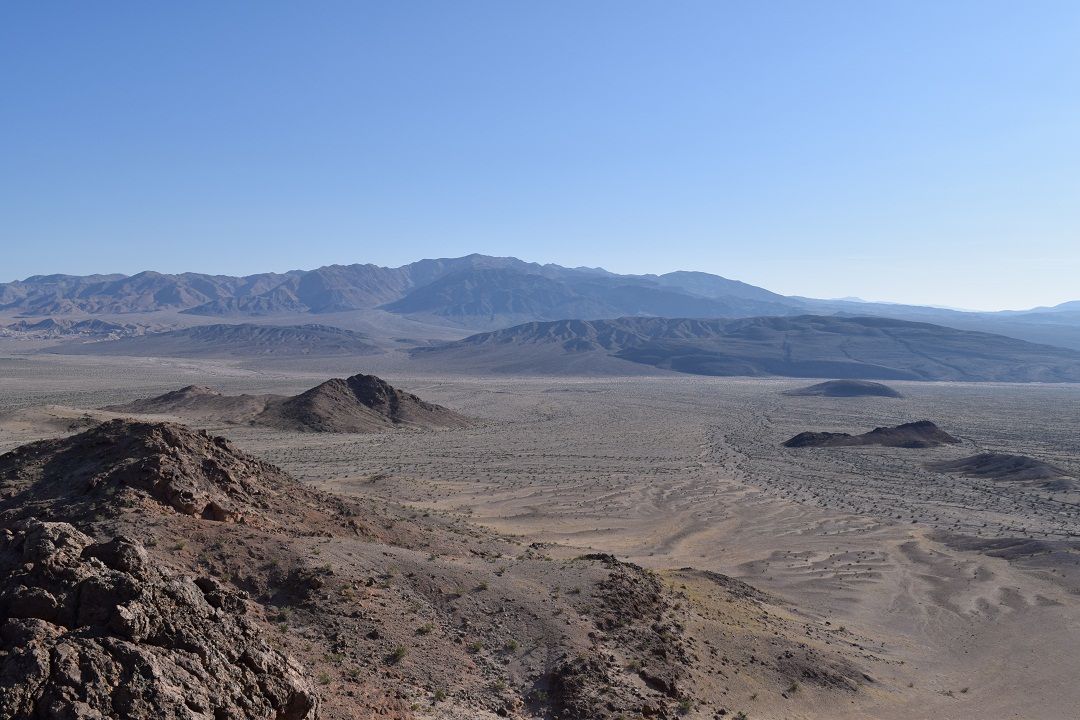 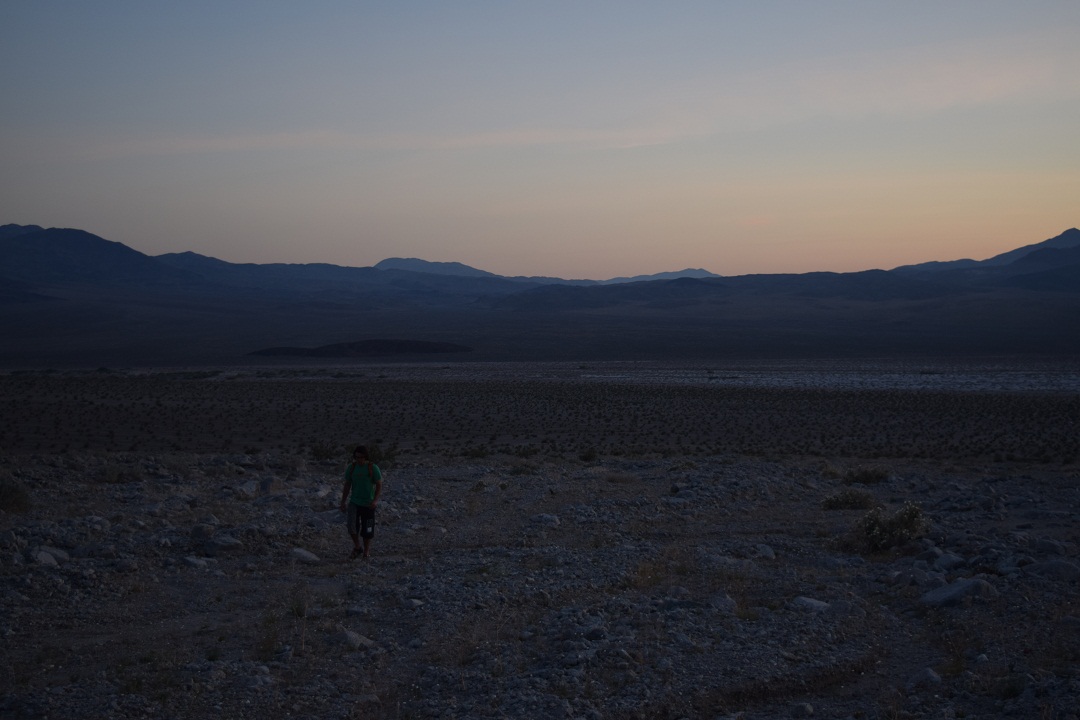 In the morning we began the most incredible day. We drove up into the Panamint Mountains, and further up, back into the cold. From there we hiked Telescope Peak! The pictures speak for themselves, the hike was fantastic.

We watched the sunset from the trail, and watched the red moon rise over the desert. We were completely exhausted afterwards, but the vibes from our group have all been very happy and good, we really know how to live! 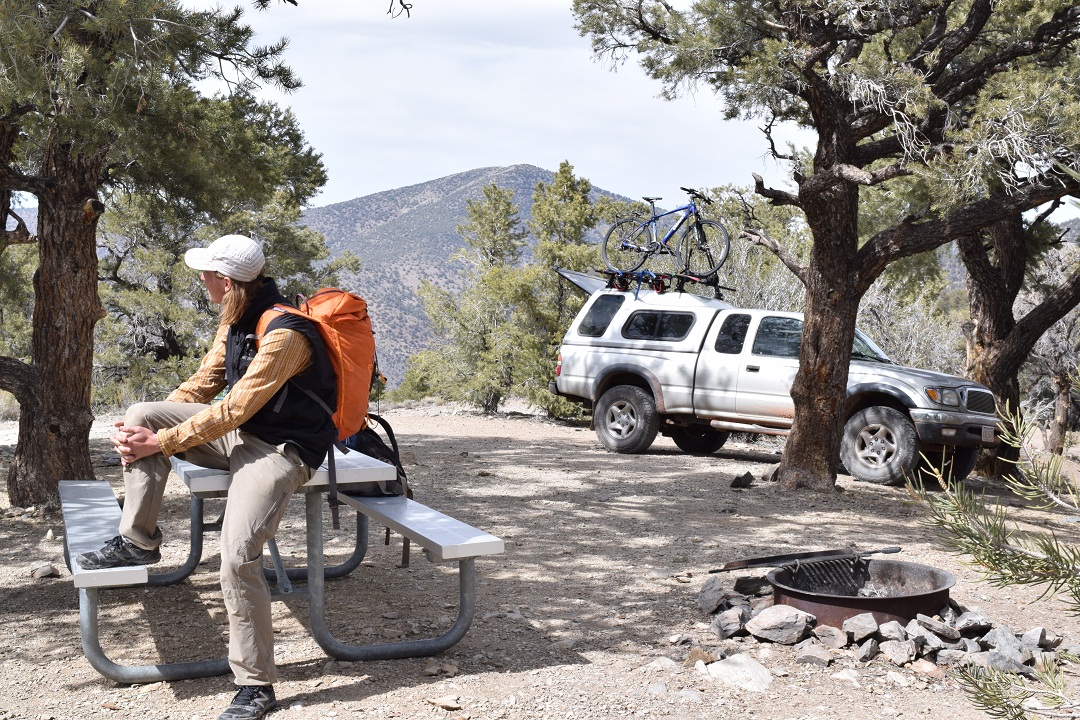 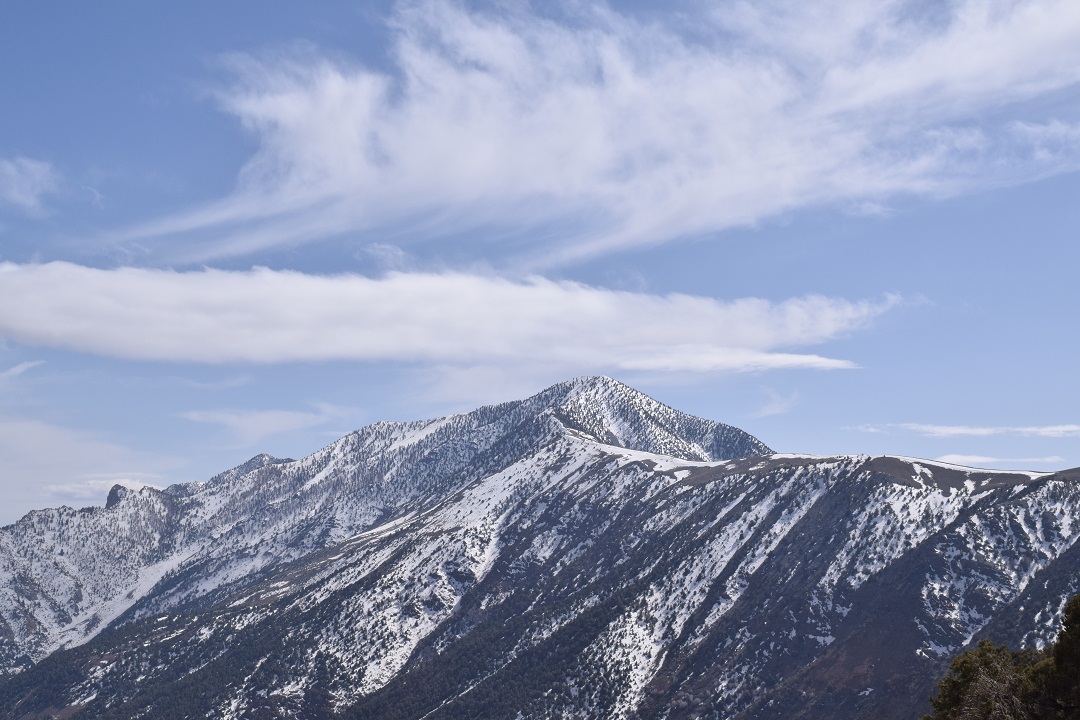 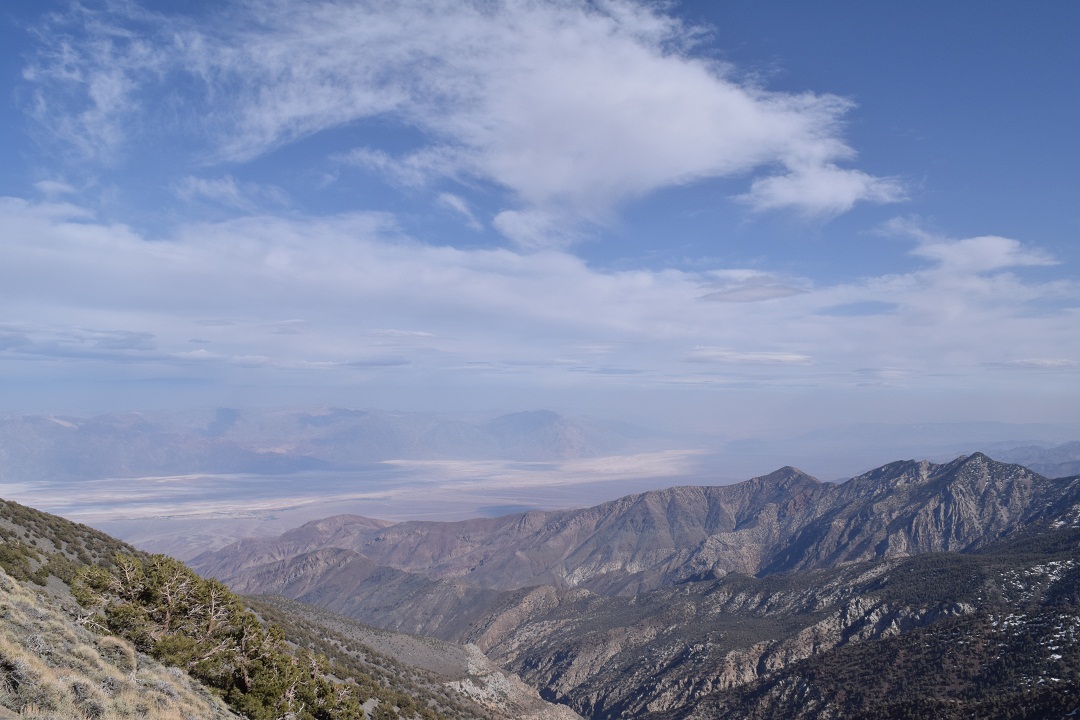 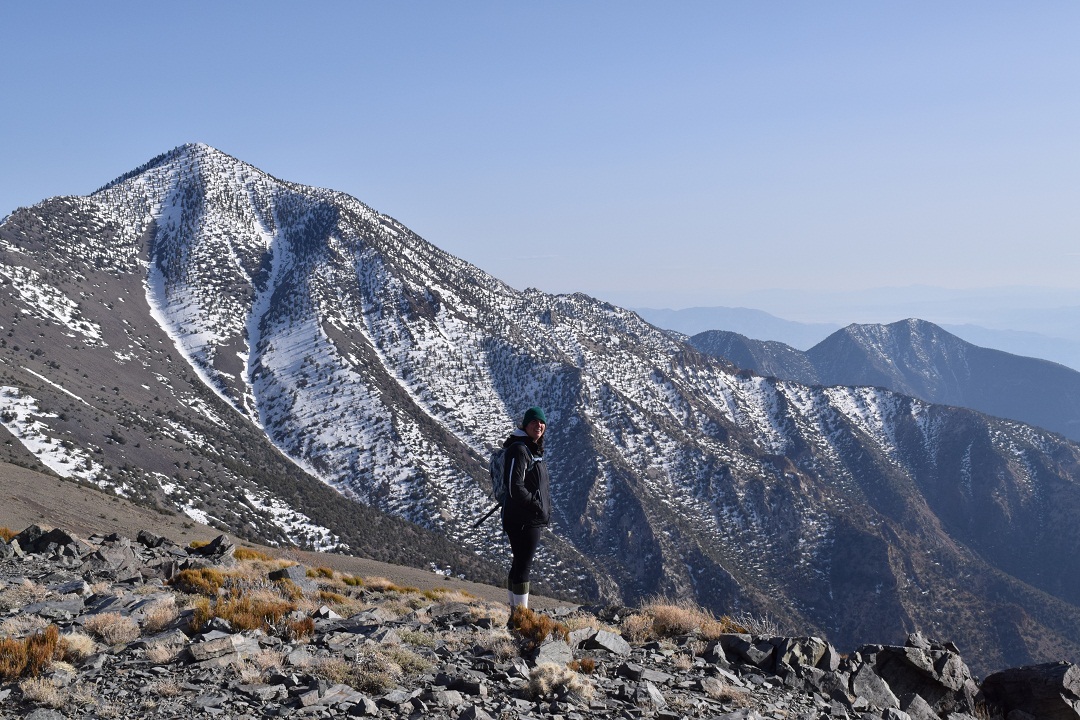 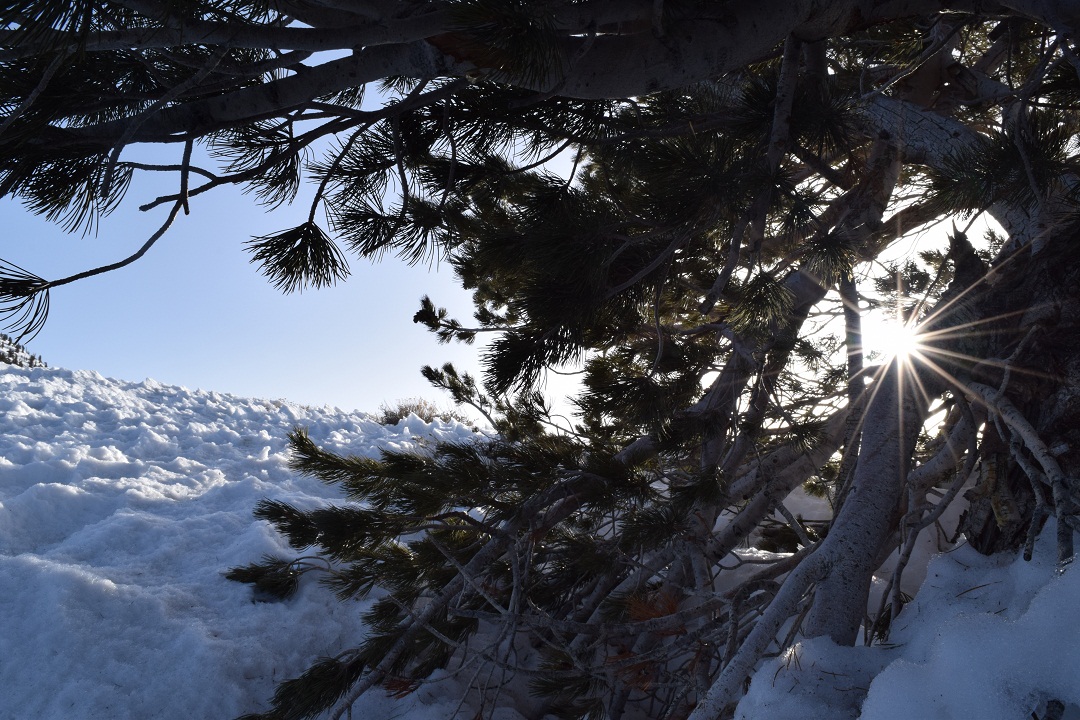 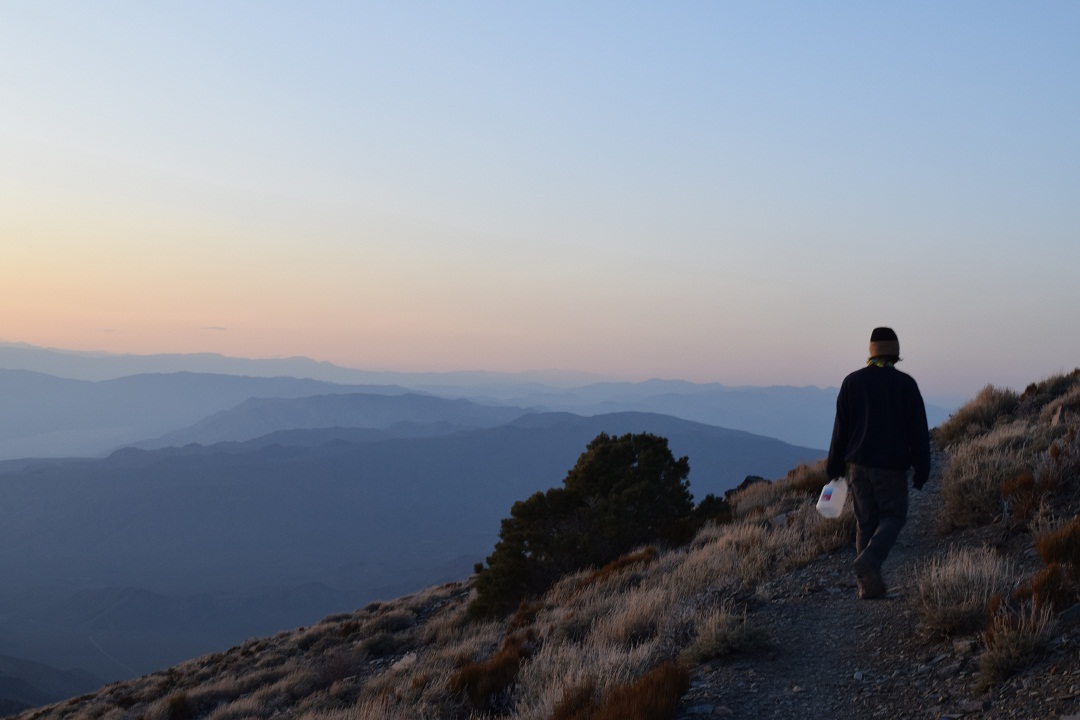 We camped in the barren desert and in the morning visited my old home, Panamint Springs. I was sorry I couldn’t see more friends there, but we ate at the restaurant on the porch and they met the family. It was a wonderful feeling to be back. 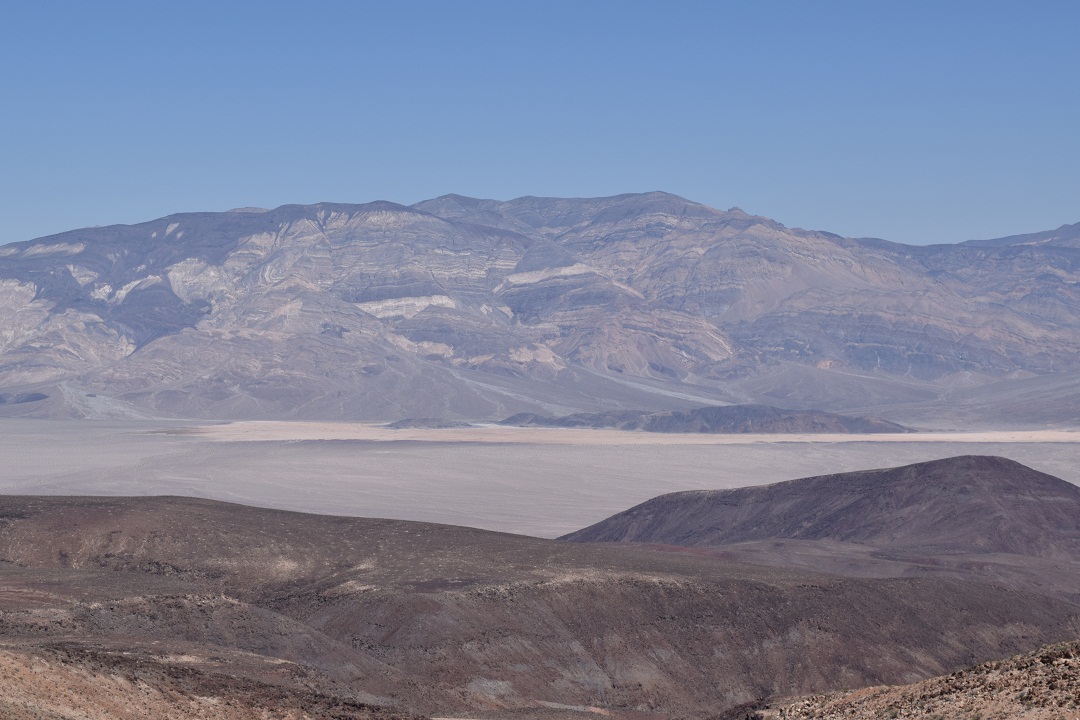 We visited Darwin after and all said hi to my friend Tom before cruising on to the Sierra Nevada Mountains. I was thrilled to show them one of my all-time favorite towns, Lone Pine. Behind Lone Pine is the tallest mountain in the US lower 48, Mount Whitney. Its granite, snow covered massive and the wall-like Sierra range makes for a dramatic backdrop to the town. Otherwise the desert surroundings are every shade of golden, sage green and indigo. 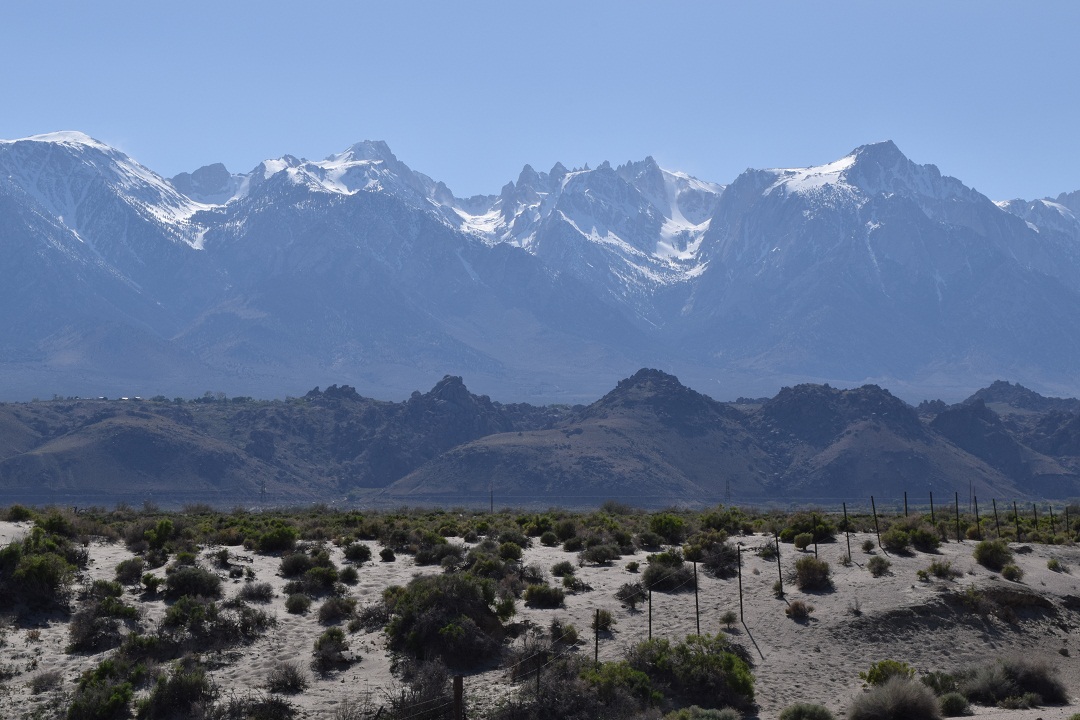 Between the huge peaks and the town of Lone Pine, you will find a wonderland of boulders called the Alabama Hills. It’s a mysterious landscape that goes on and on, hiding all kinds of secrets among thousands of boulders. We went climbing that day, my friend Sarah and her dog came along, and we continued climbing into the darkness. 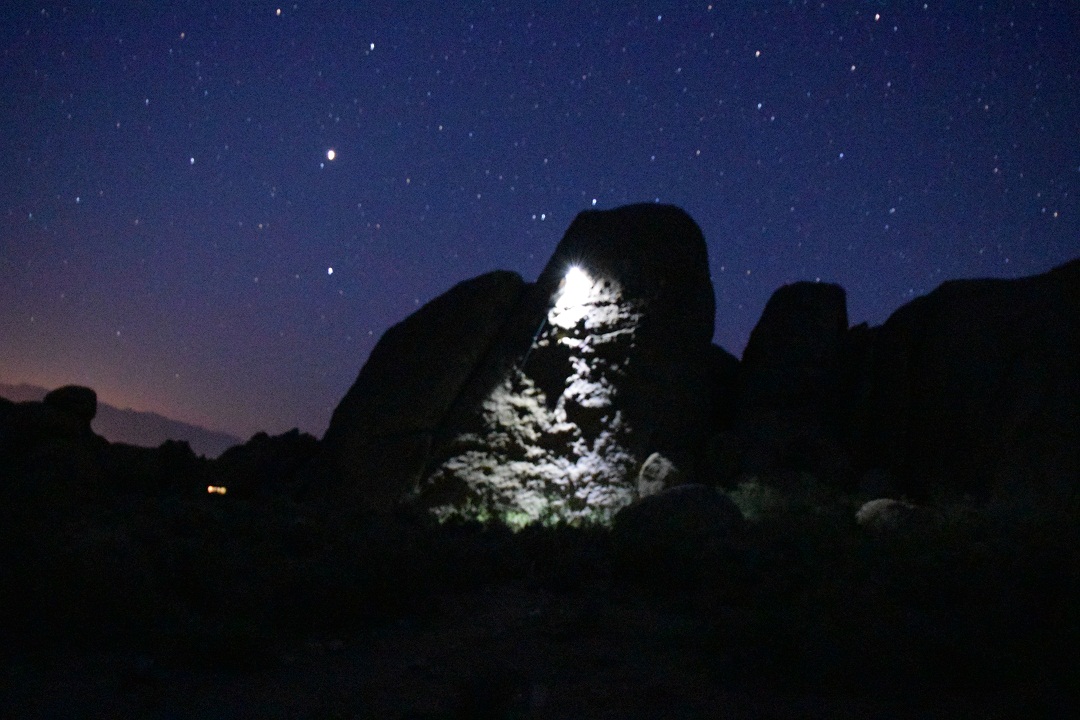 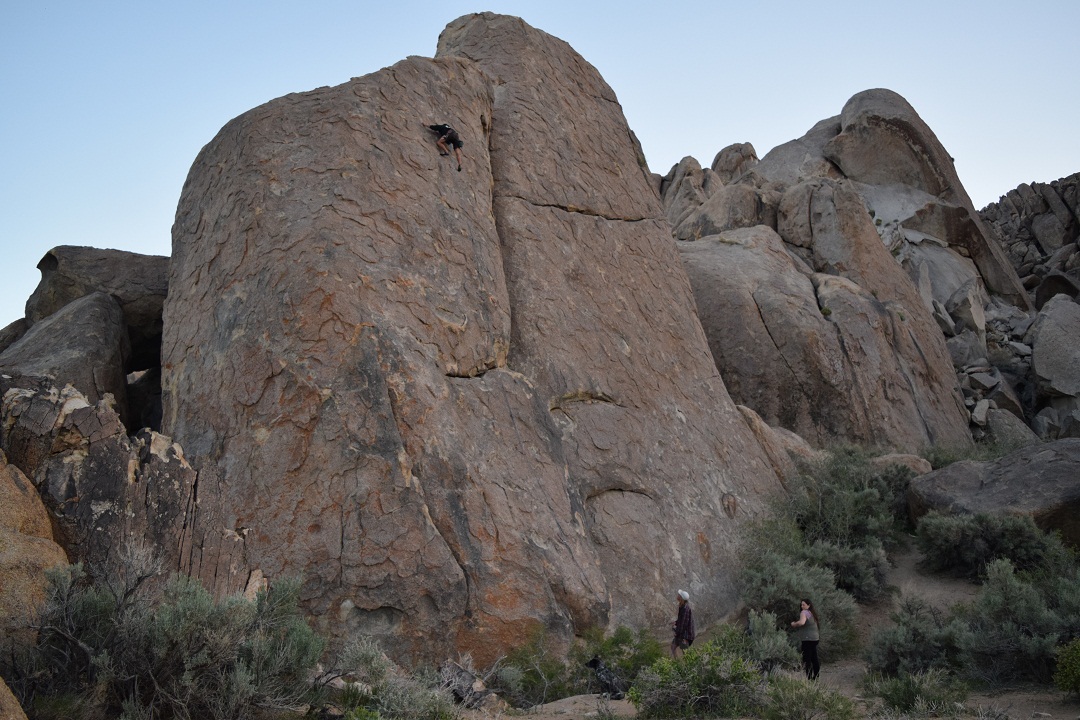 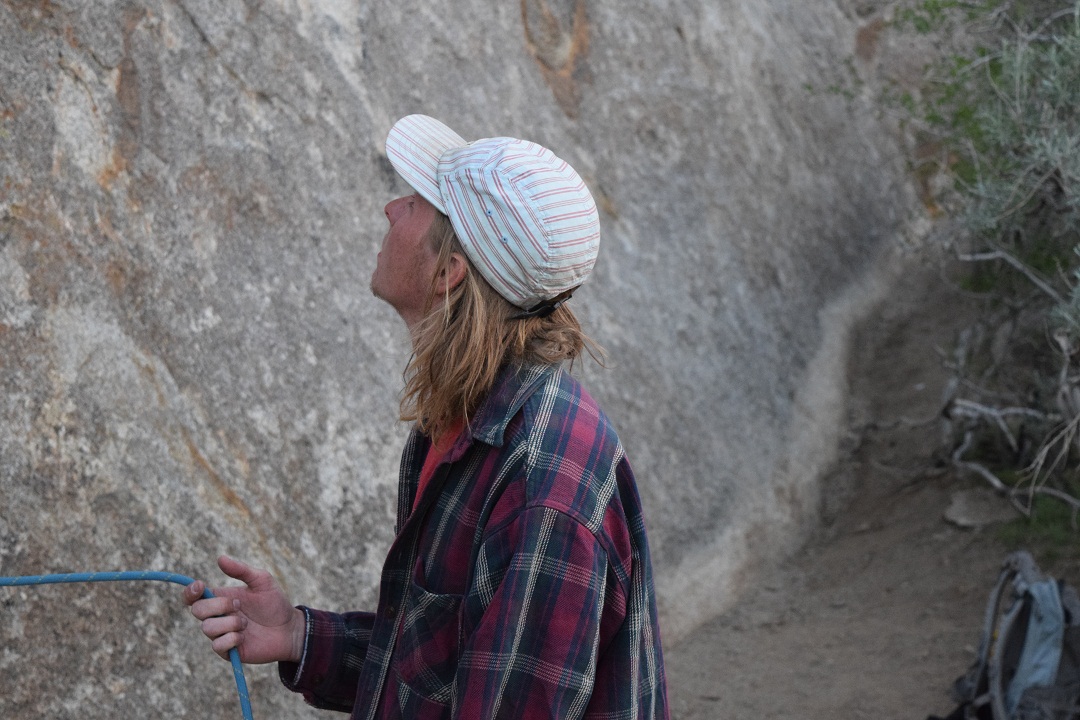 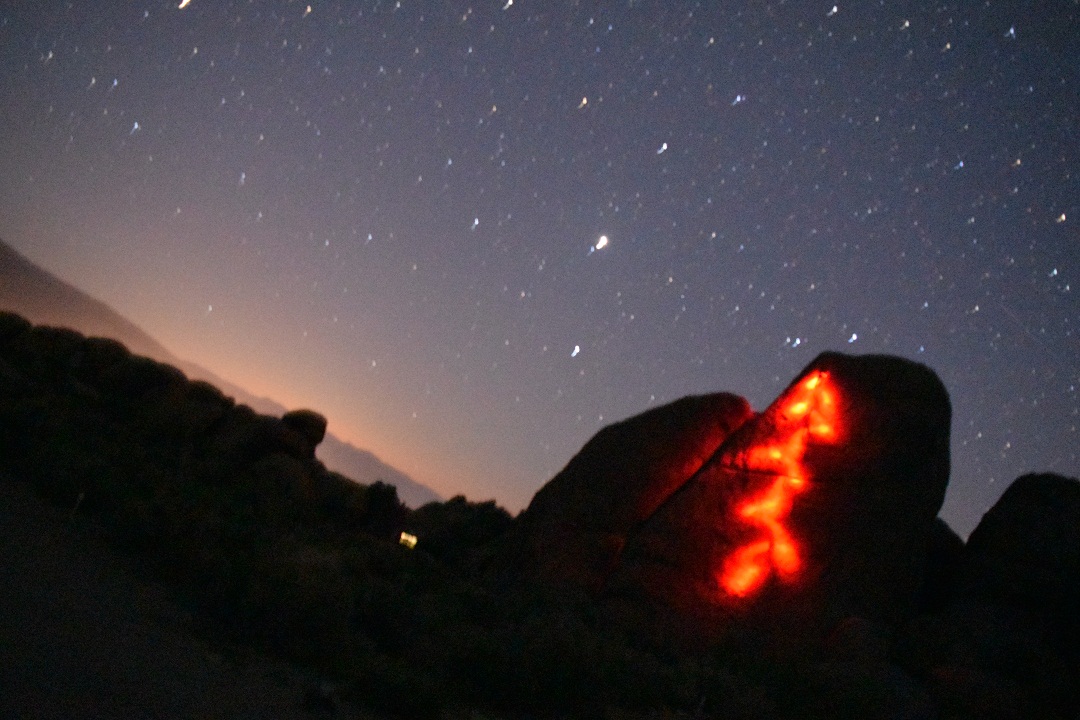 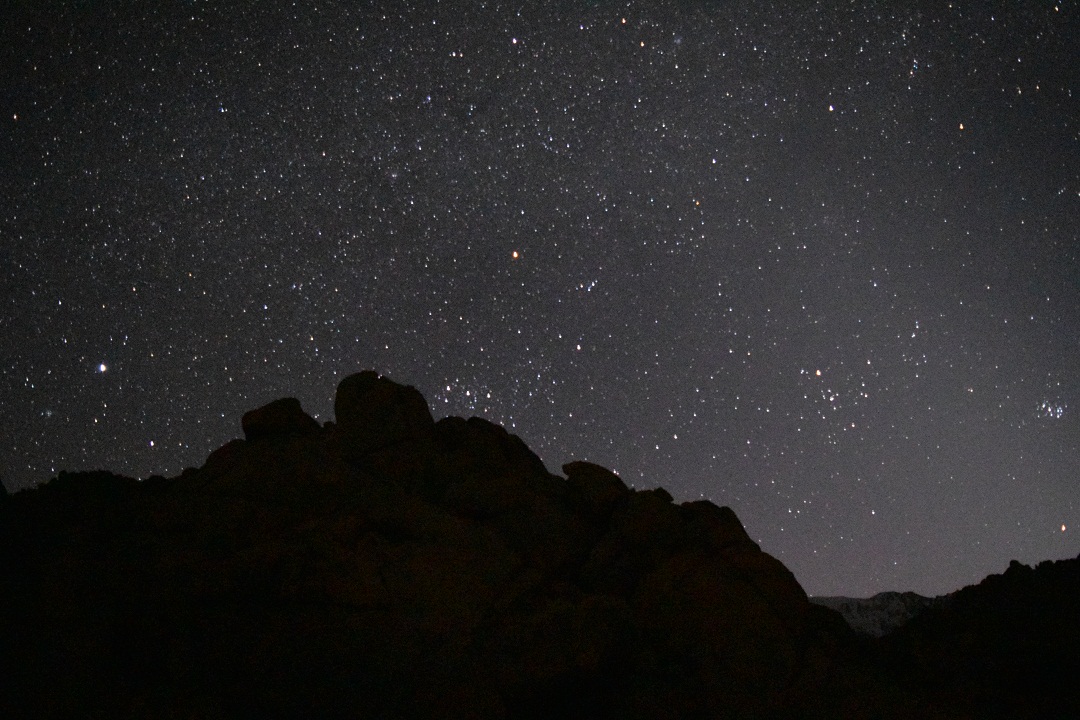 The next day we sat at my favorite café for a while, and then climbed the Shark’s Fin rock. Definitely one of the most picturesque climbs of our lives. 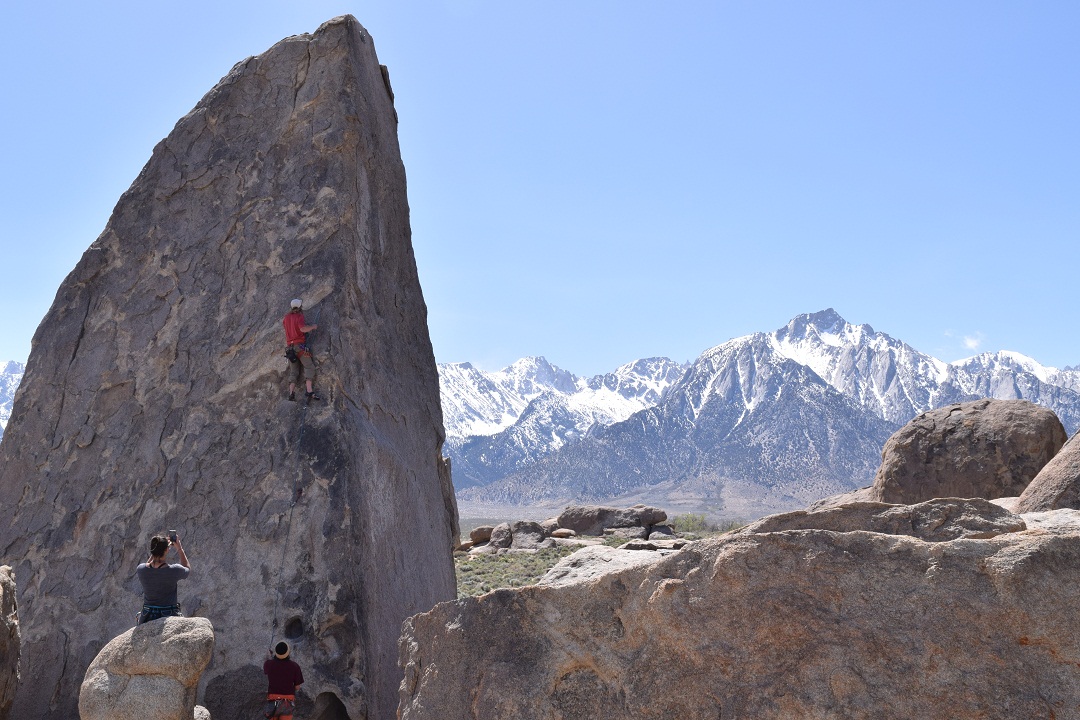 We moved on and camped at a magical stream we found in the next town north, Independence. This is the spot I want to live in some day, I’ve found it!!!

Onward we drove, to Bishop. We didn’t do too much, just had a peaceful day driving up into the Sierras and Mike and Ben took out the snowboard to have some mountain fun. Meredith and I were biking up and down the road, and finally she went the entire way down to the desert on the bicycle. 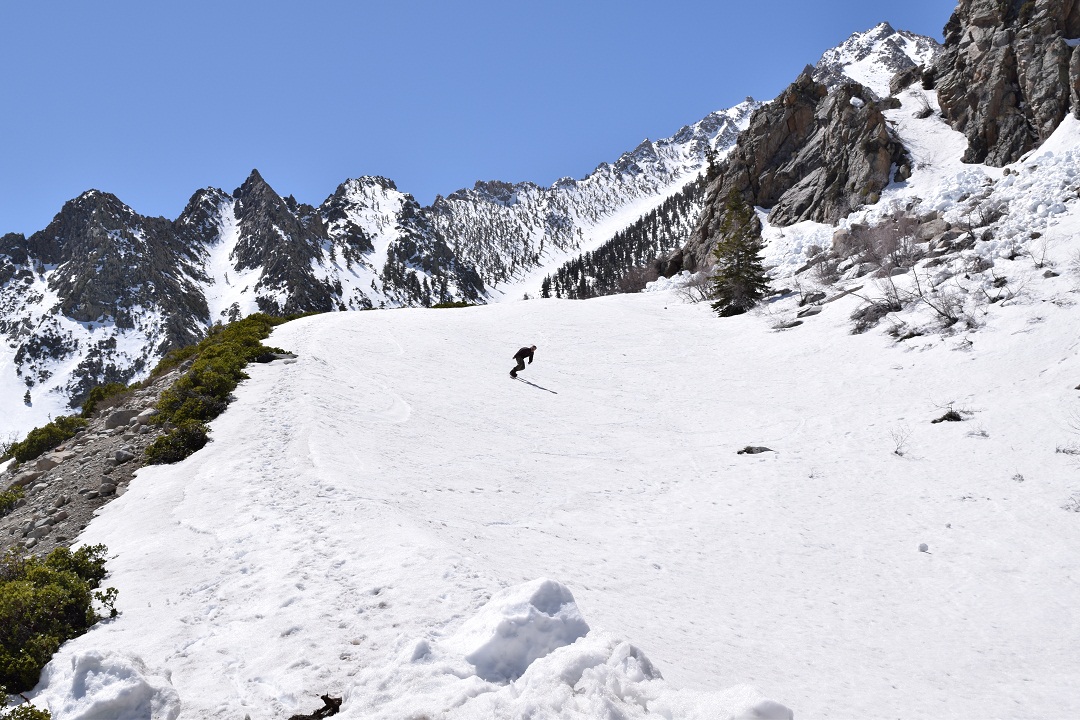 We camped at Bishop. The next day we went and visited friends in Mammoth Lakes. It was great to see them and we stayed in our friend’s apartment on the floor. That is where we first saw this insane Californian snow. Snow banks probably 12 feet tall along all the roads, it’s unbelievable and more snow than I’ve ever seen in New England. However it was 75 degrees outside…

We found some hot springs, it was the most amazing hot springs experience I’ve ever had, with snow covered mountains to look at while we soaked in the nearly scalding water. The cold air outside eventually felt fantastic as our core temperatures raised.

Finally we drove to Mono Lake. So many days of driving and we haven’t made it very far. So we had a solid driving day and I think that’s it for the southwest! The warm air has felt perfect, but it’s getting late in the month and we need to be in Alaska soon.

Here in Tahoe, winter is still holding its grip, and finally it’s raining. Life can’t be this easy forever can it!? Maybe… But we are pretty tough people, and we love each other, so I’m really optimistic for the future. Tomorrow we’ll leave Tahoe to see a friend in Nevada City, because we seem to have friends in every town we pass through, and after that we’ll keep going north! 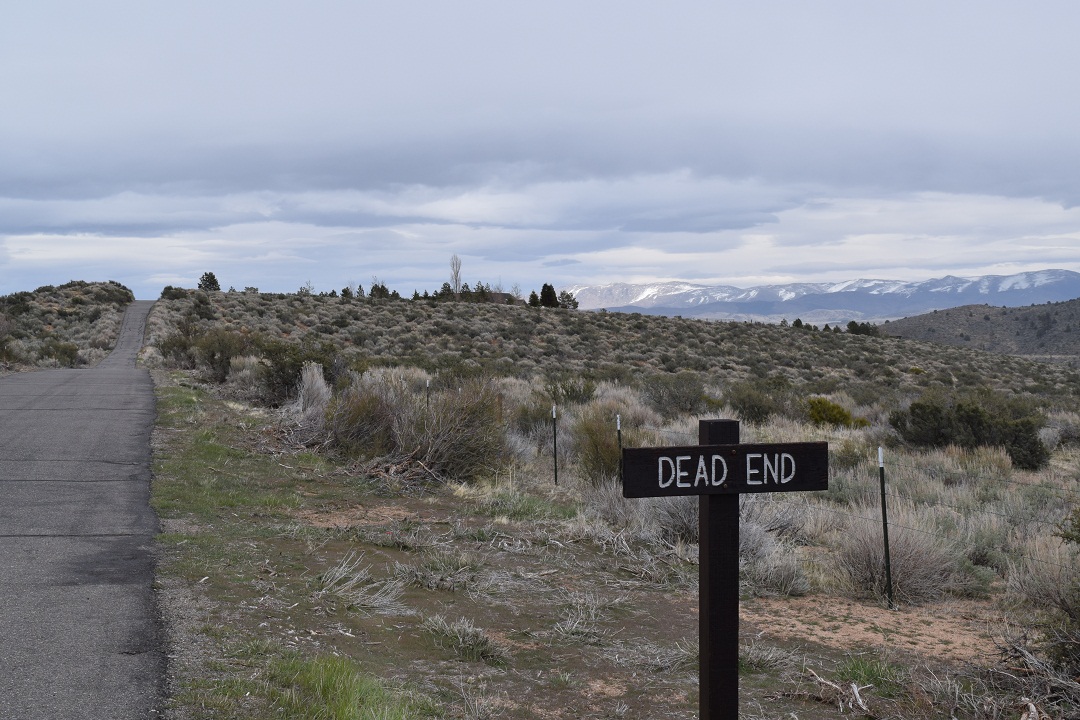