“Man is born to die. His works are short lived. Buildings will crumble, monuments decay. Wealth vanishes, but Katahdin in all its glory, shall forever remain the mountain of the people of Maine.” 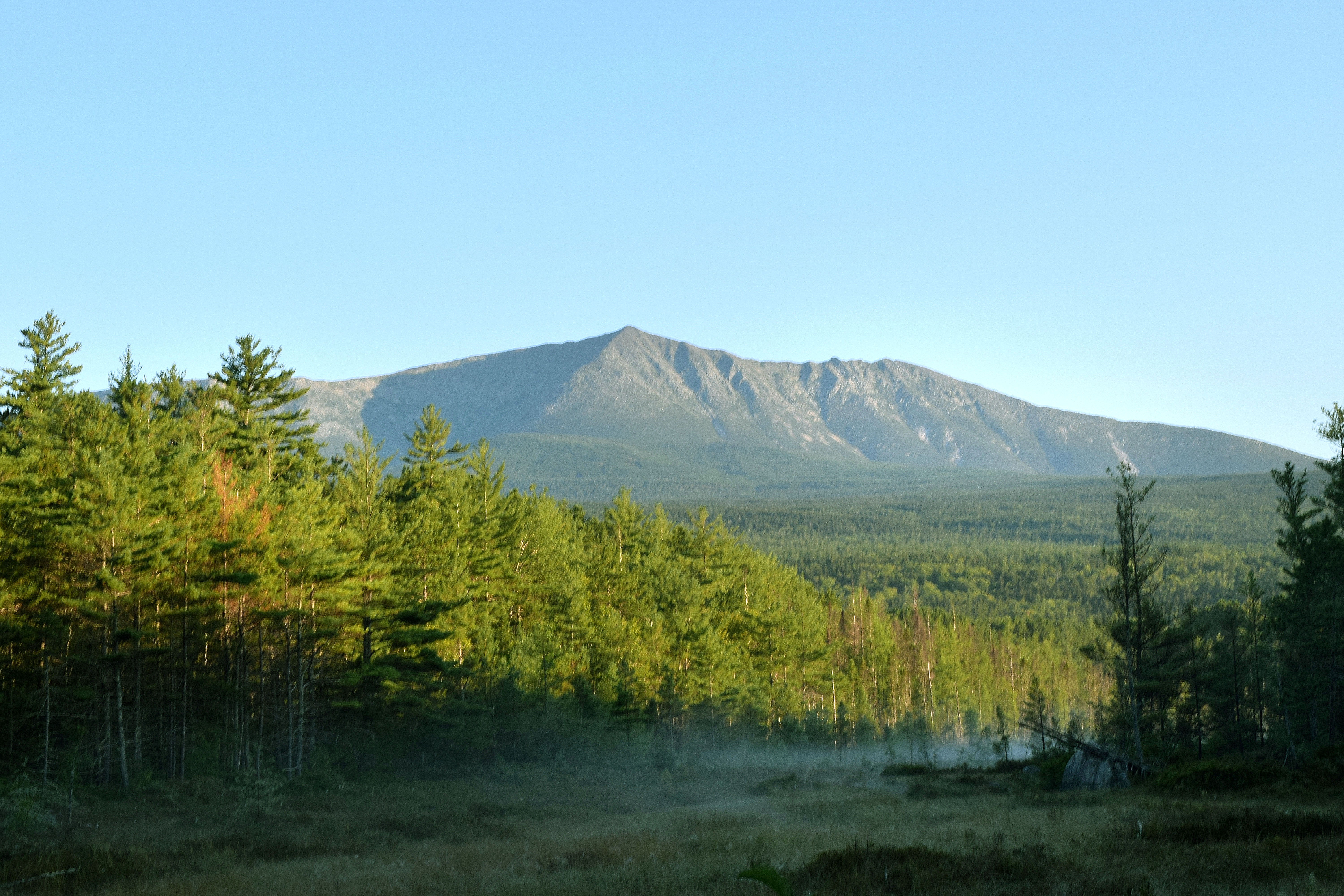 The weekend we had planed came and after meeting up at Jimmy’s new apartment, him Dad and I embarked on the eight hour drive to Maine. It was in the early evening when we finally pulled into Millinocket, it was great to be back in that small town lost out in the northern Maine woods. I was going back up Katahdin, and this time we would try not to be defeated. 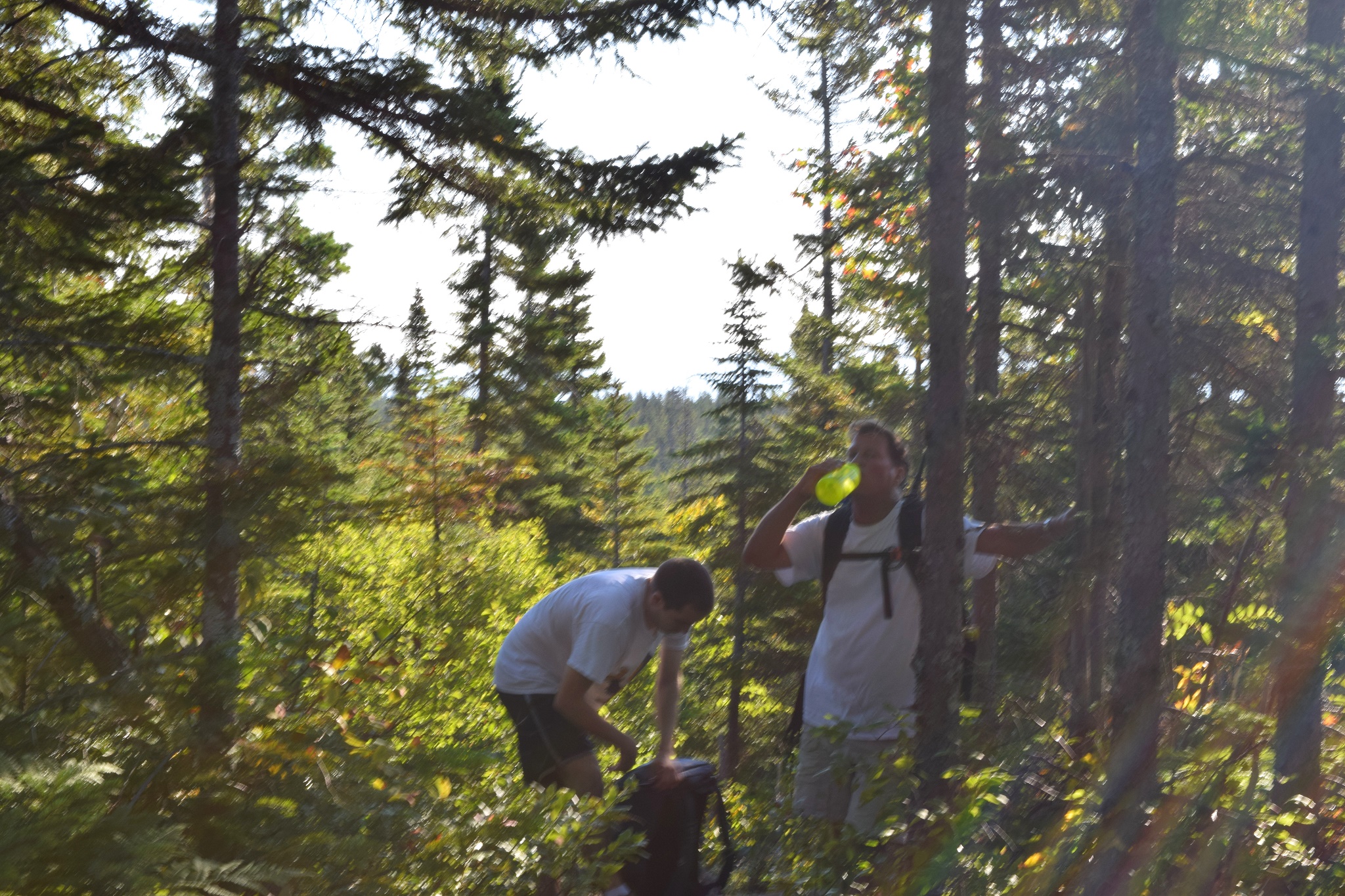 We camped at my same spot under the powerlines with a view of the epic mountain and I was surprised to find the mosquitoes still bad even in September! It was labor day weekend, knowing full well the trail would be obscenely crowded, we woke up at 5AM and went right to it. 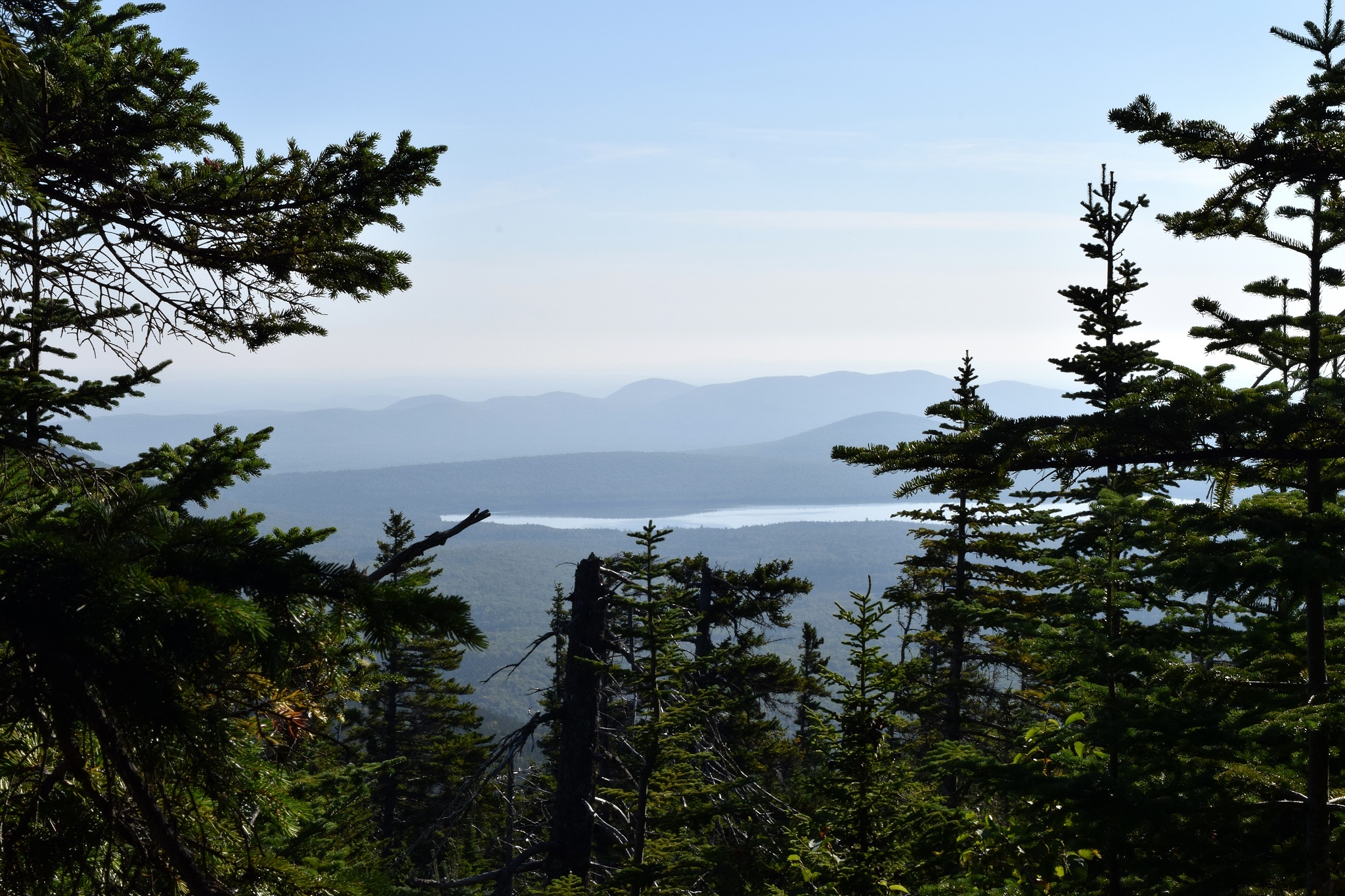 We soon found ourselves in a long line which had formed behind the gatehouse, going at a crawl to get into Baxter state park even at the early hour of the morning. When we finally made it to the ranger, she informed us,

“Sorry Mt. Katahdin is full, you can wait in the stage one line over there, but I wouldn’t recommend it because that line isn’t going anywhere. Either that or you can hike a different mountain, the Brothers are a good trail.”

“Okay no problem,” I said pleasantly, “We’ll do the Brothers.” Jimmy and Dad knew it was highly unlike me to give in without a fight, but over the years I had learned how to properly deal with our classic American bureaucracy.

“Thank you so much for your cooperation,” she said, having to certainly put up with everyone else’s outrage at her. “Just take a left at that fork in the road”

I drove off, and at the fork in the road, abruptly took a right! Headed not for the Brothers, but in fact, Katahdin. Much panic/adrenaline came over the passengers, as well as myself, but I didn’t drive this far and pay 14 dollars to hike the Brothers, sorry. 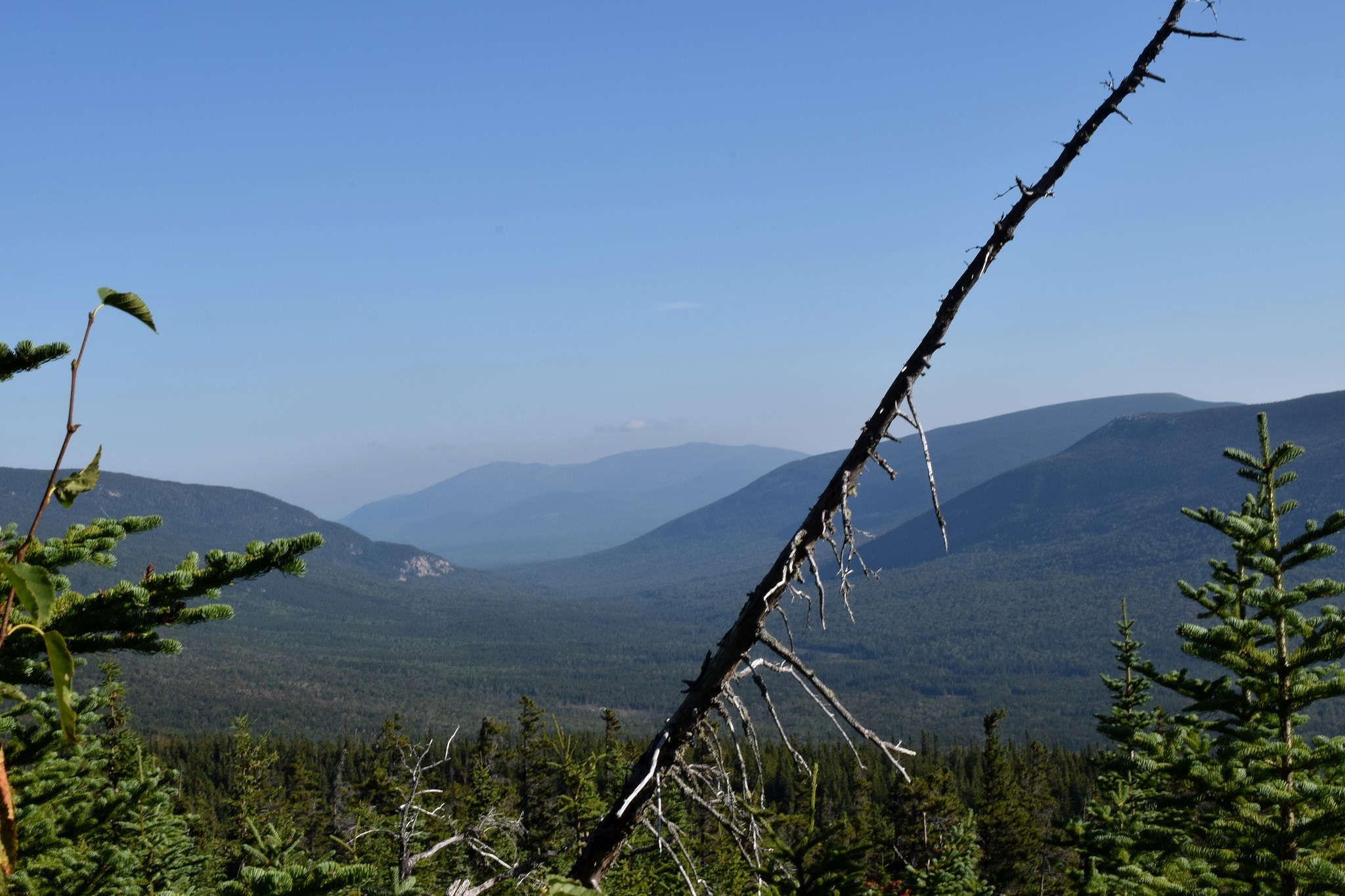 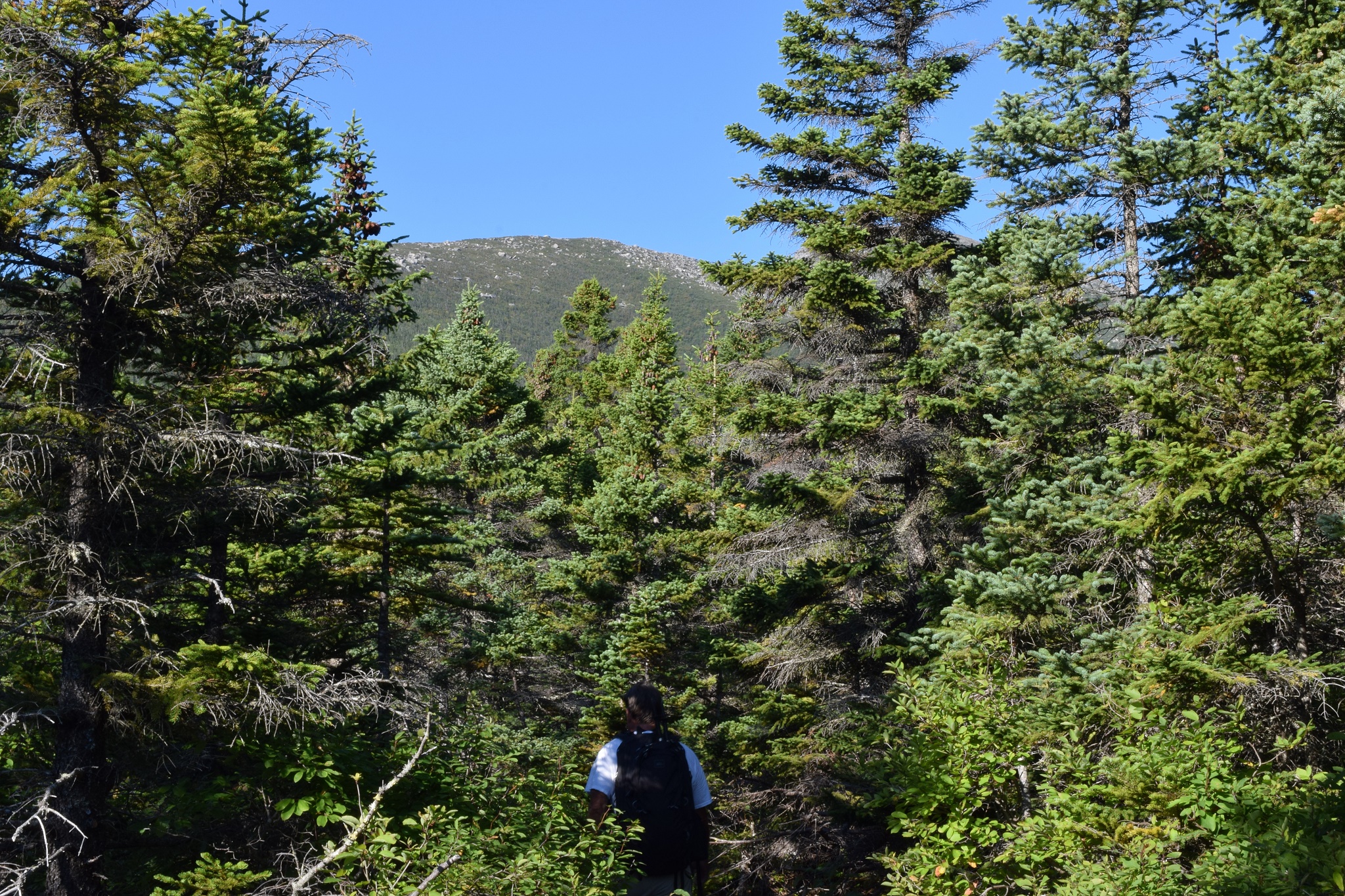 We snagged one of the last parking spaces at Katahdin and began the grueling climb. Unfortunately, now I was on edge, we all slightly were. I felt bad having skipped the line that way, it wasn’t the best thing to do, and we were almost certain we’d walk back to a ticket on the windshield upon our return. But, we decided we’d split paying the ticket and it was worth it. Often when climbing mountains, I’ve learned, bureaucracy is the first obstacle! Then the boulders and steep terrain, those follow; all must be conquered to achieve a mountain summit. 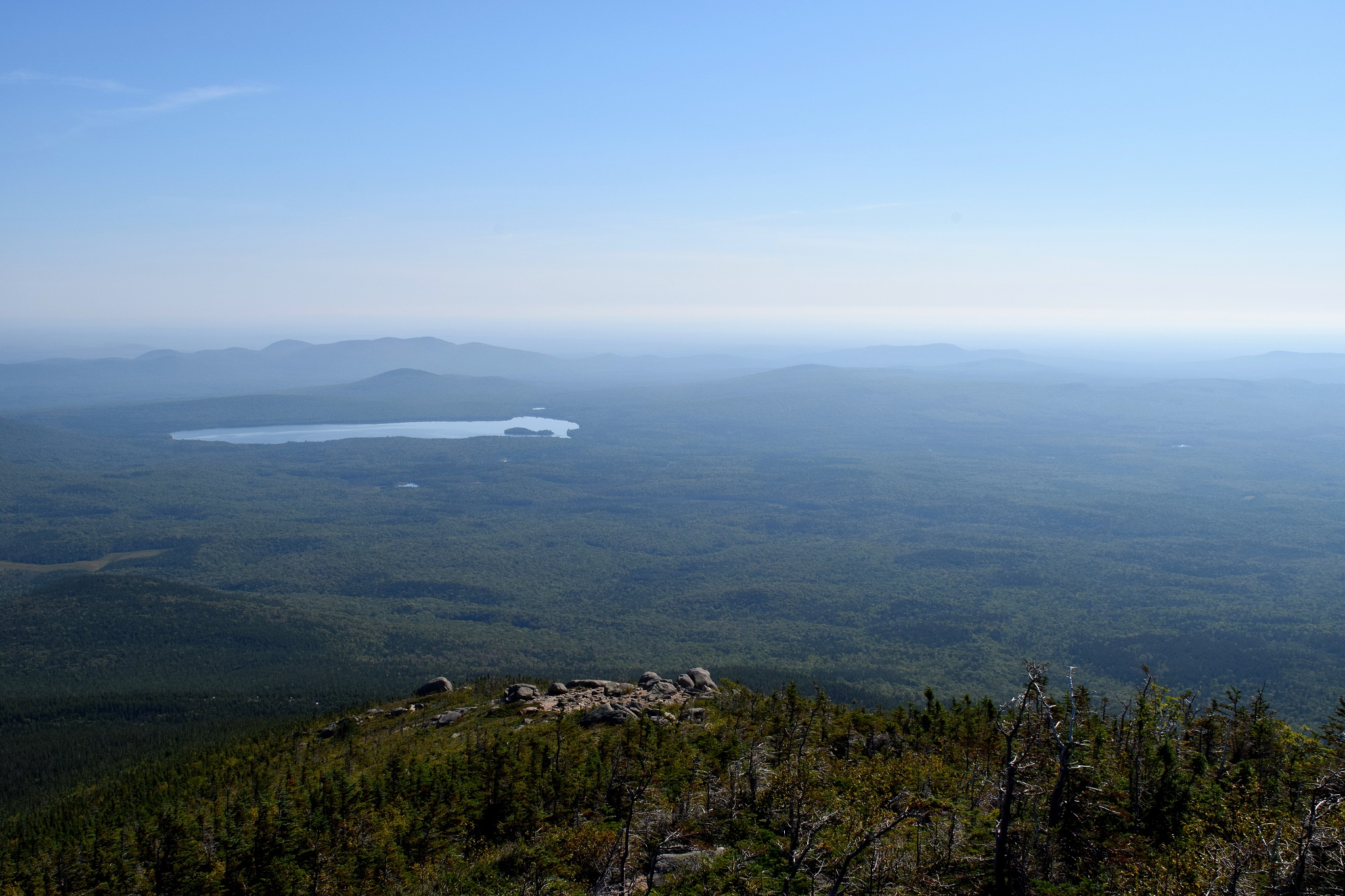 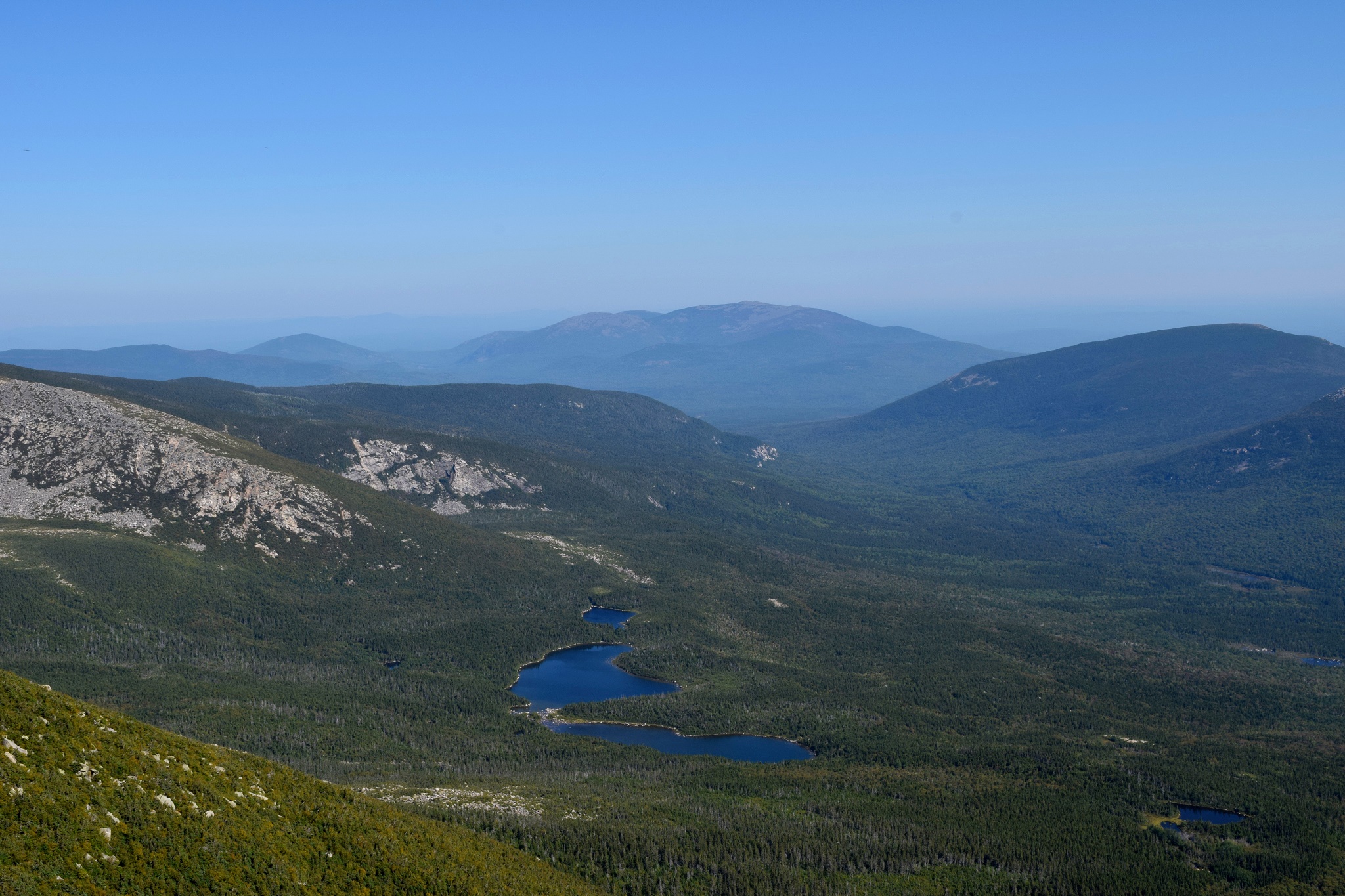 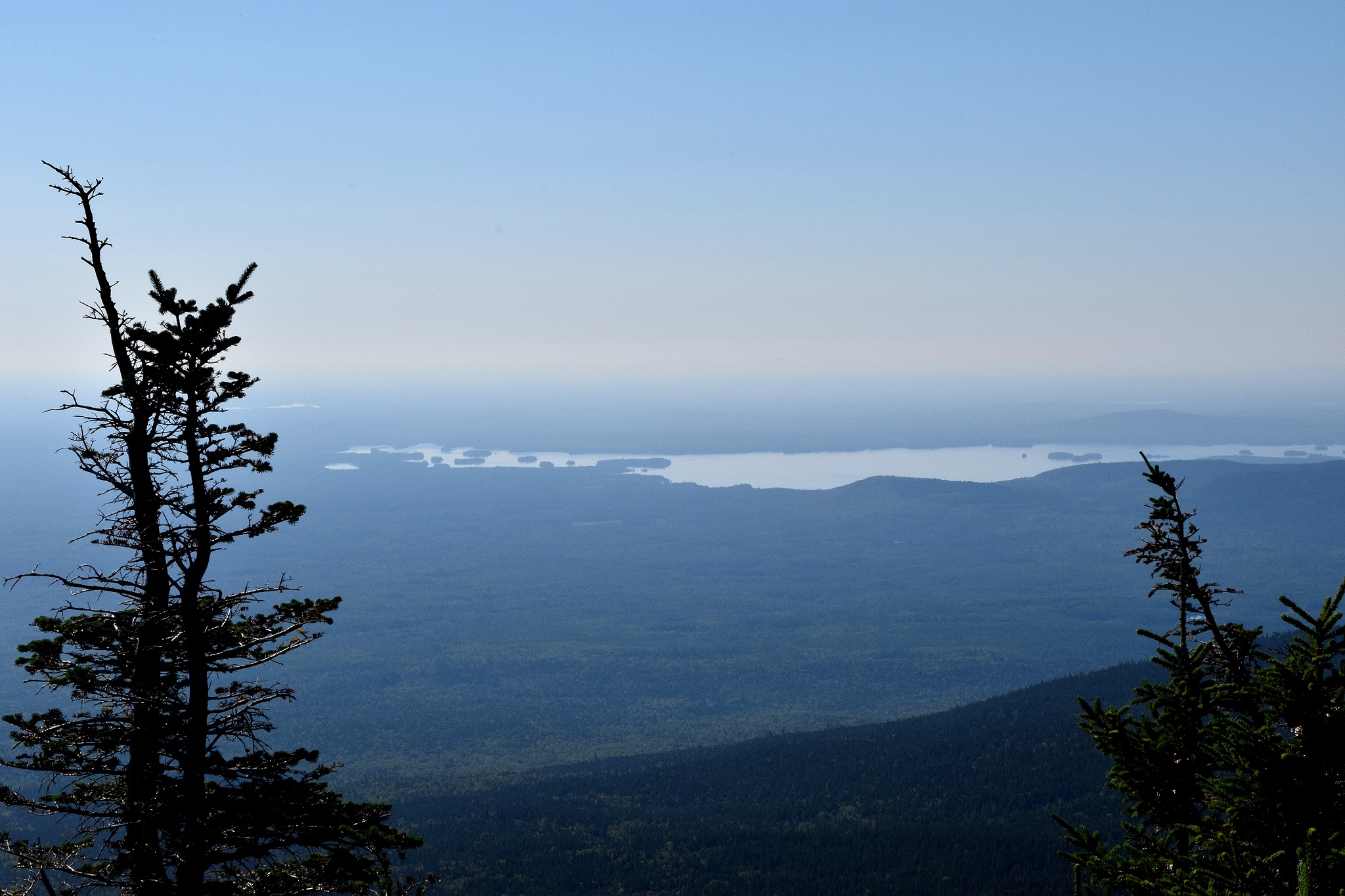 “Don’t worry Jimmy, we aren’t climbing Katahdin so we aren’t actually breaking the rule. We’re climbing “Baxter Peak,”” I told him. Katahdin is the native name for the prominent and holy mountain, but officially on the maps, it is titled “Baxter Peak.” Aha, a loophole. This seems to be much like the Mt. McKinley controversy whose name was finally restored to ‘Denali’ as it should be. 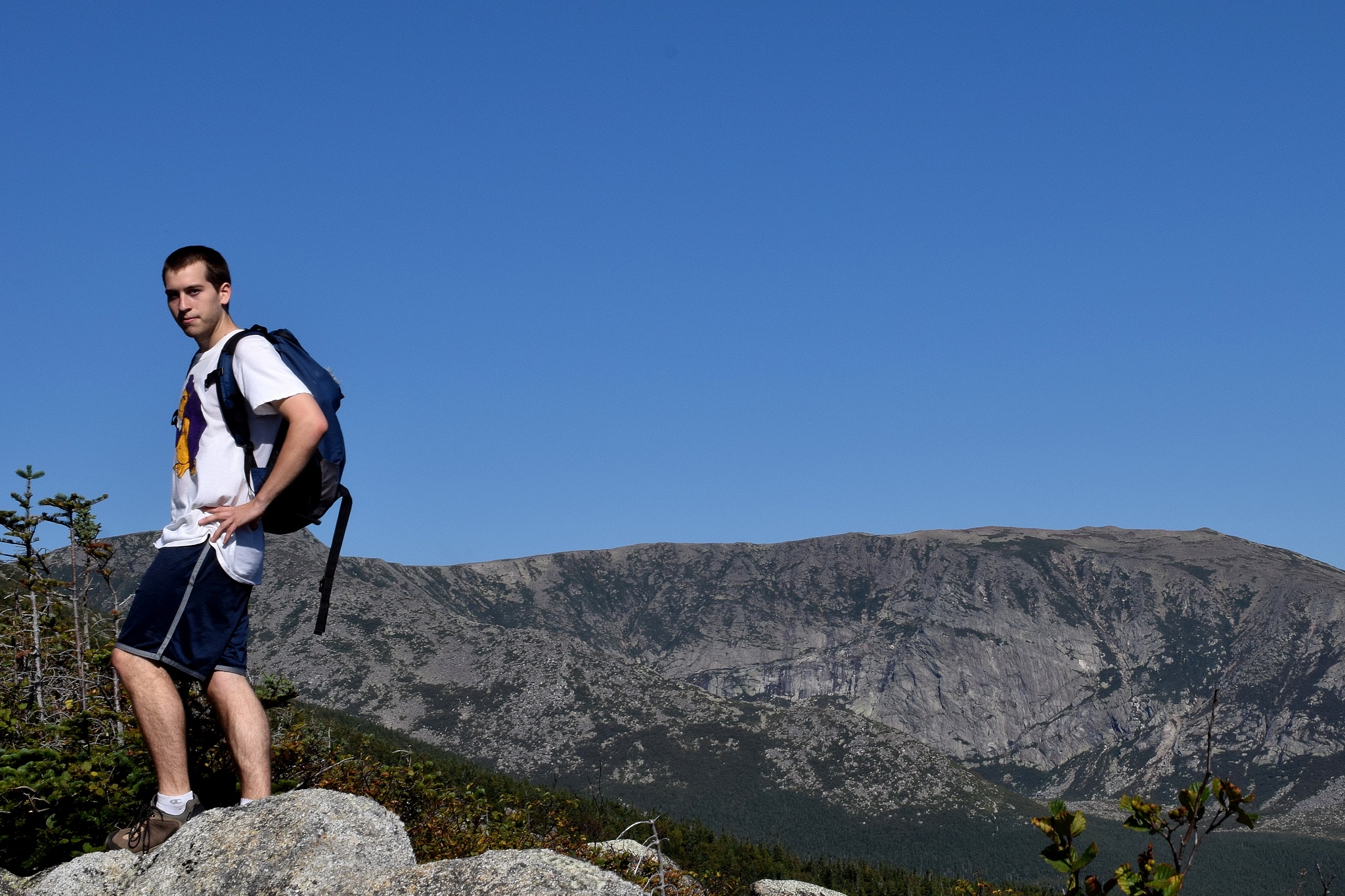 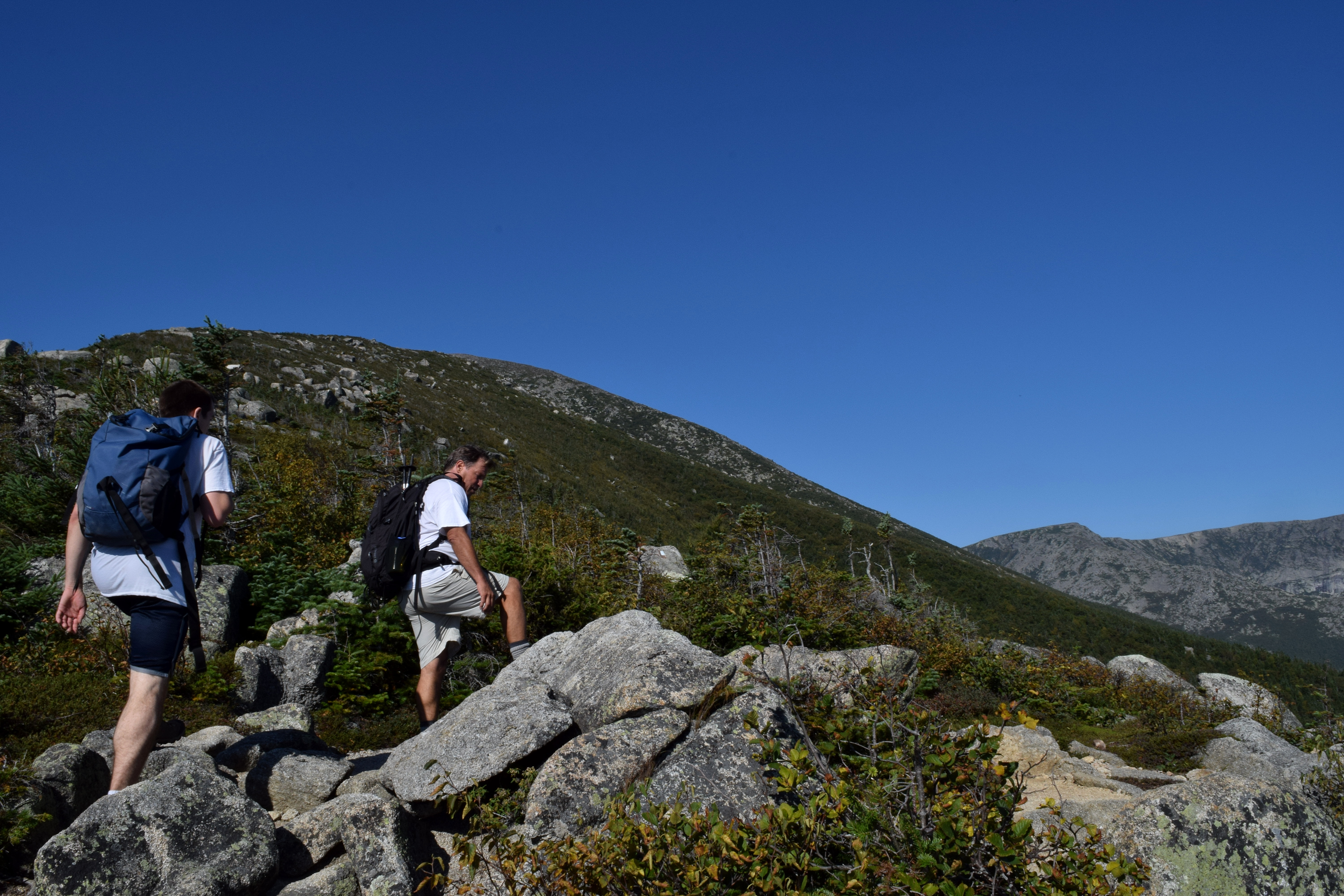 We had the trail entirely to ourselves because we took the road less traveled to get up. The views soon became breathtaking. The last time I climbed Katahdin in the cloud I hadn’t witnessed this. Maine’s 100 mile wilderness was before us and swampy lakes studded with islands could be seen. No towns were visible at all in any direction. 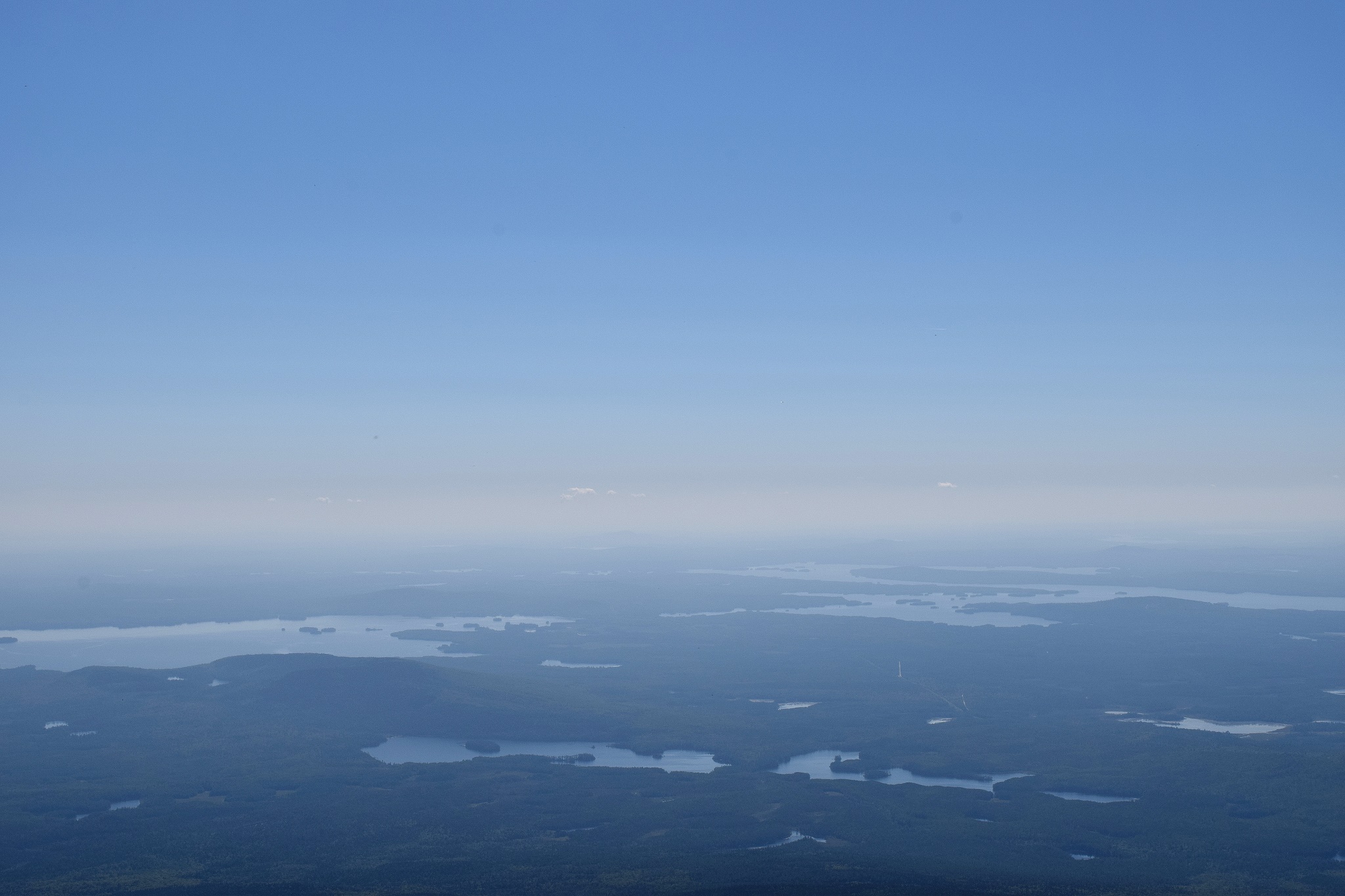 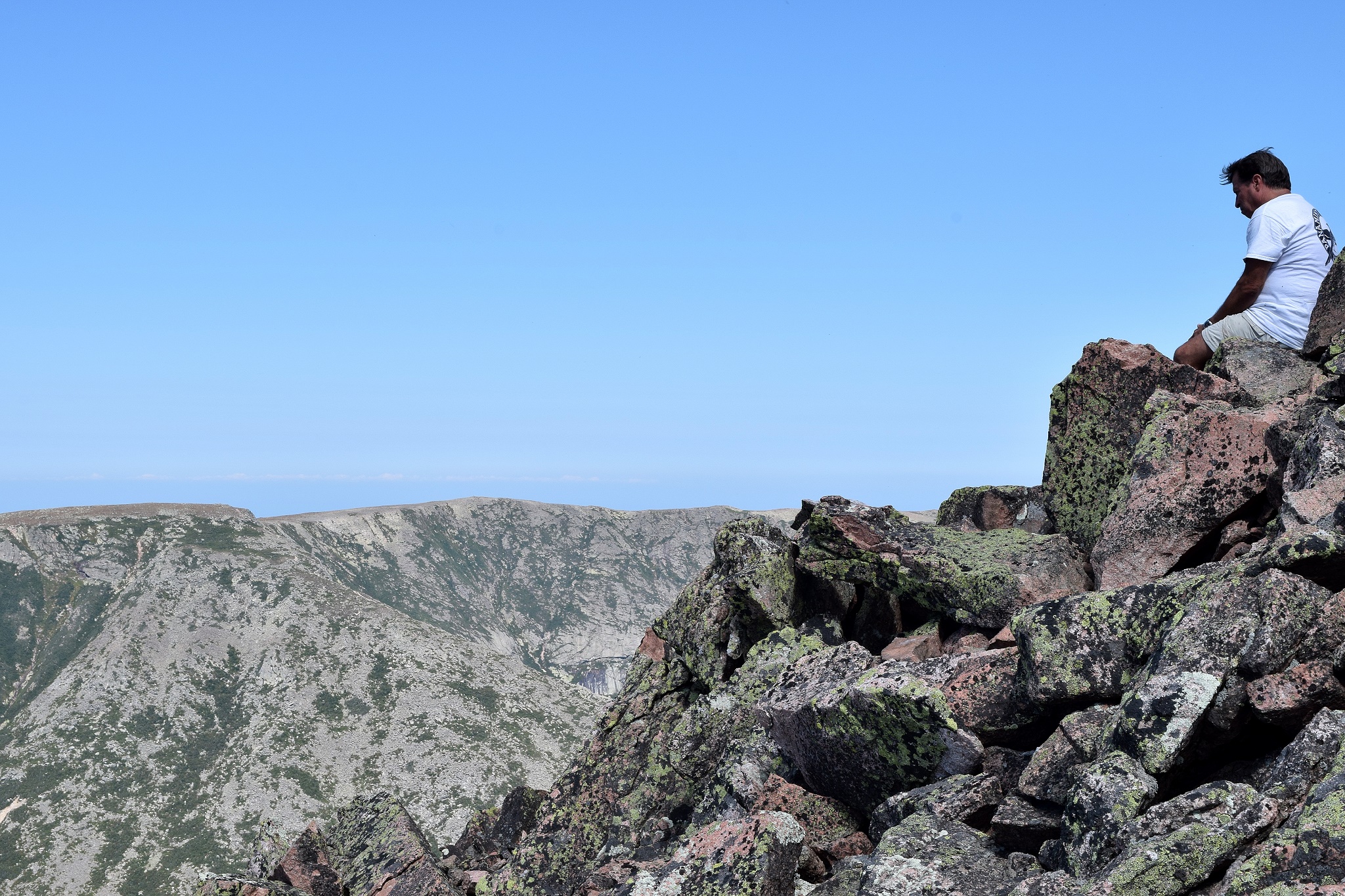 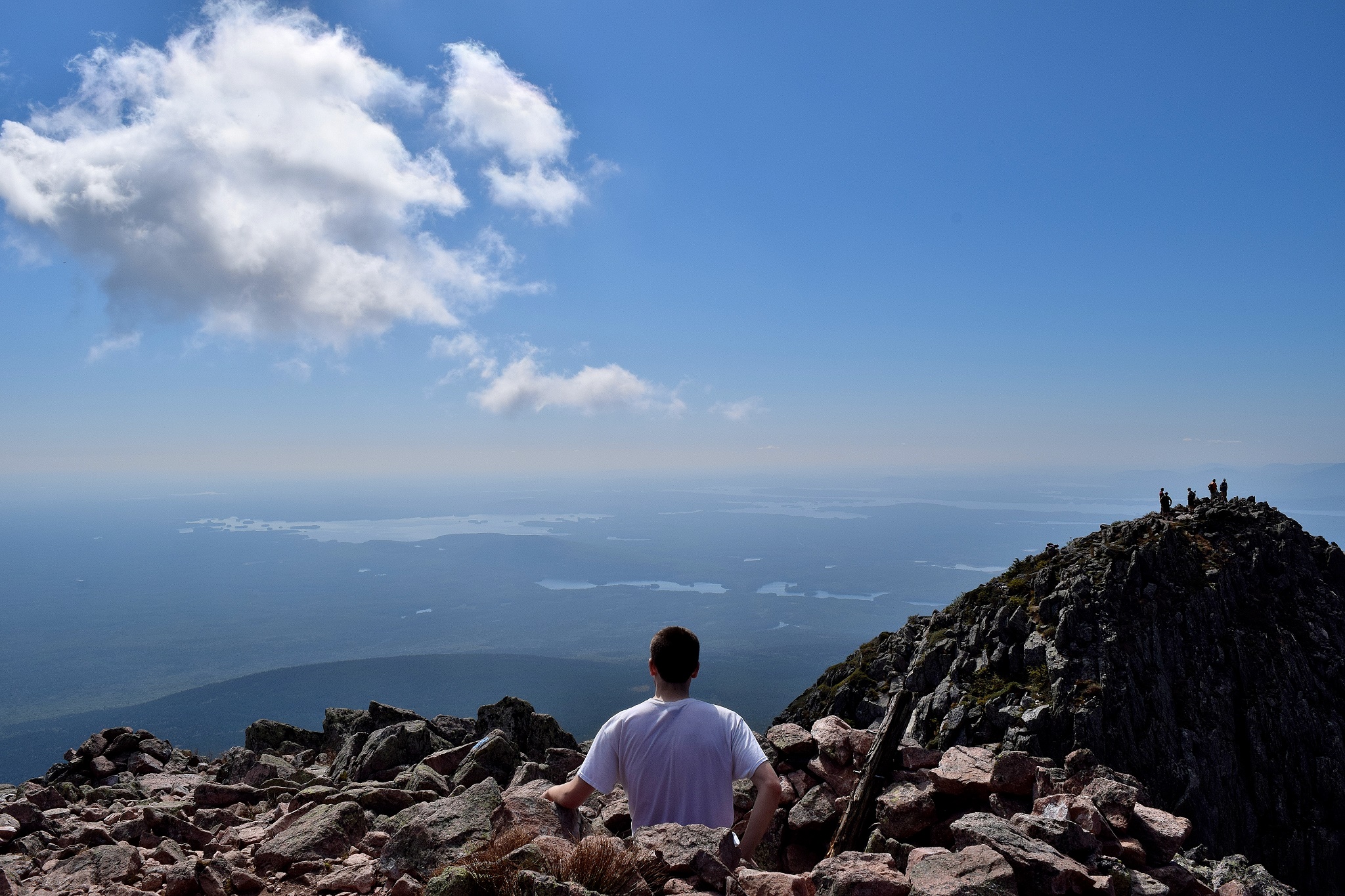 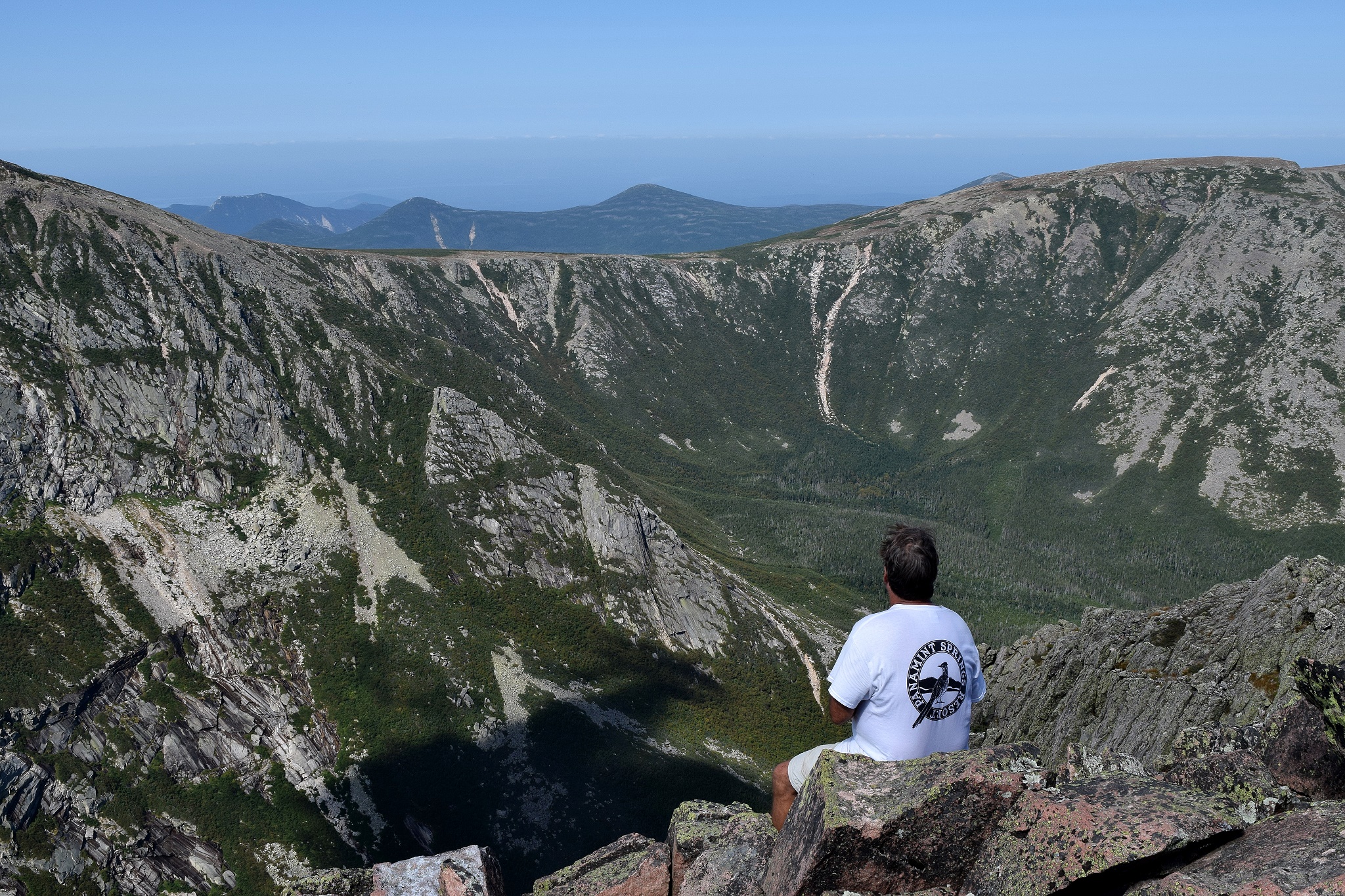 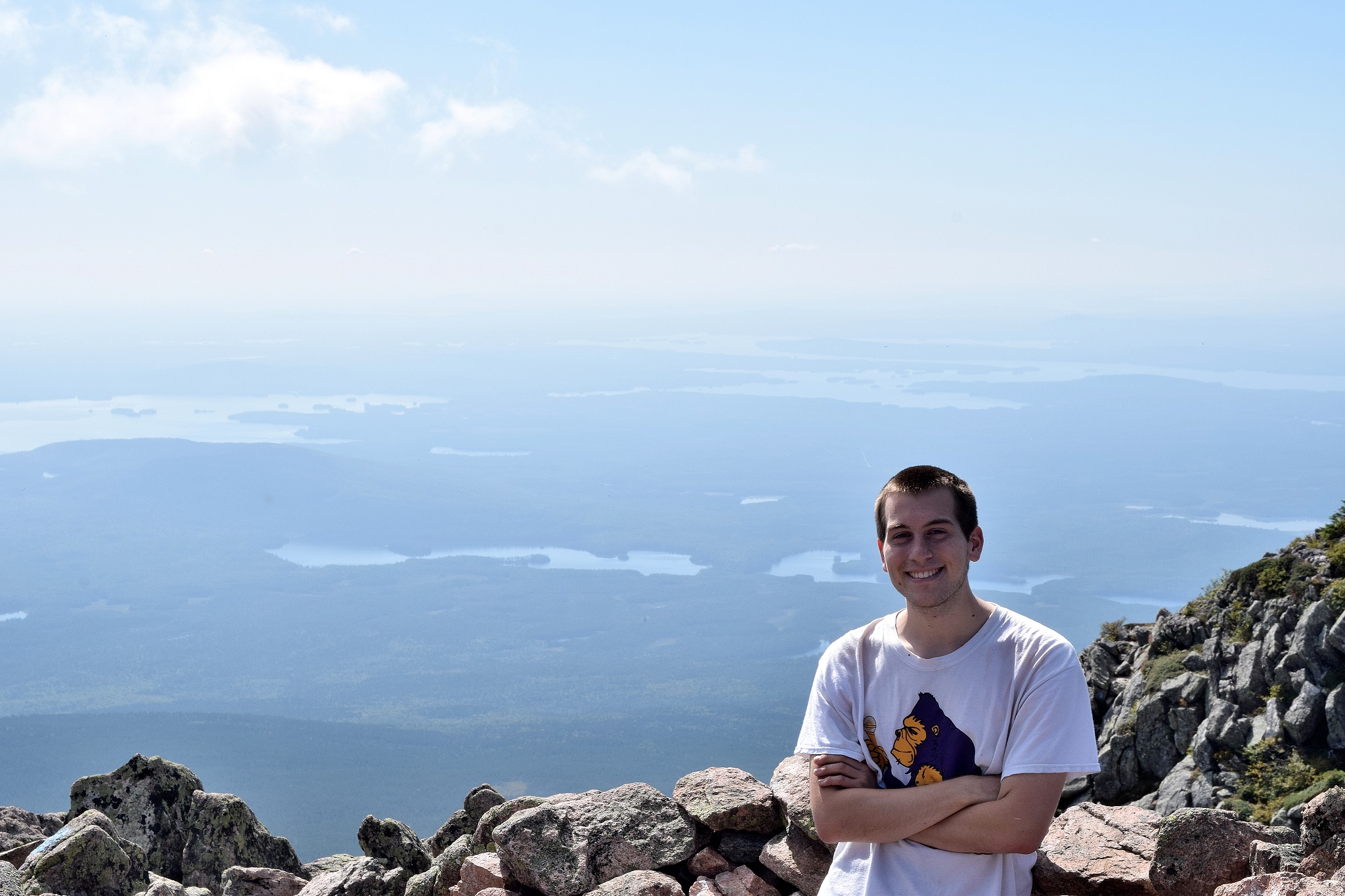 The mountain was rocky, like a mountain from the west sitting as an island apart from the Appalachians. The bold rock faces did remind me of some epic western mountain, like Mt. Whitney, but Katahdin was distinctly eastern with an elegant color palate in shadows of teal, blue and purple on the green. 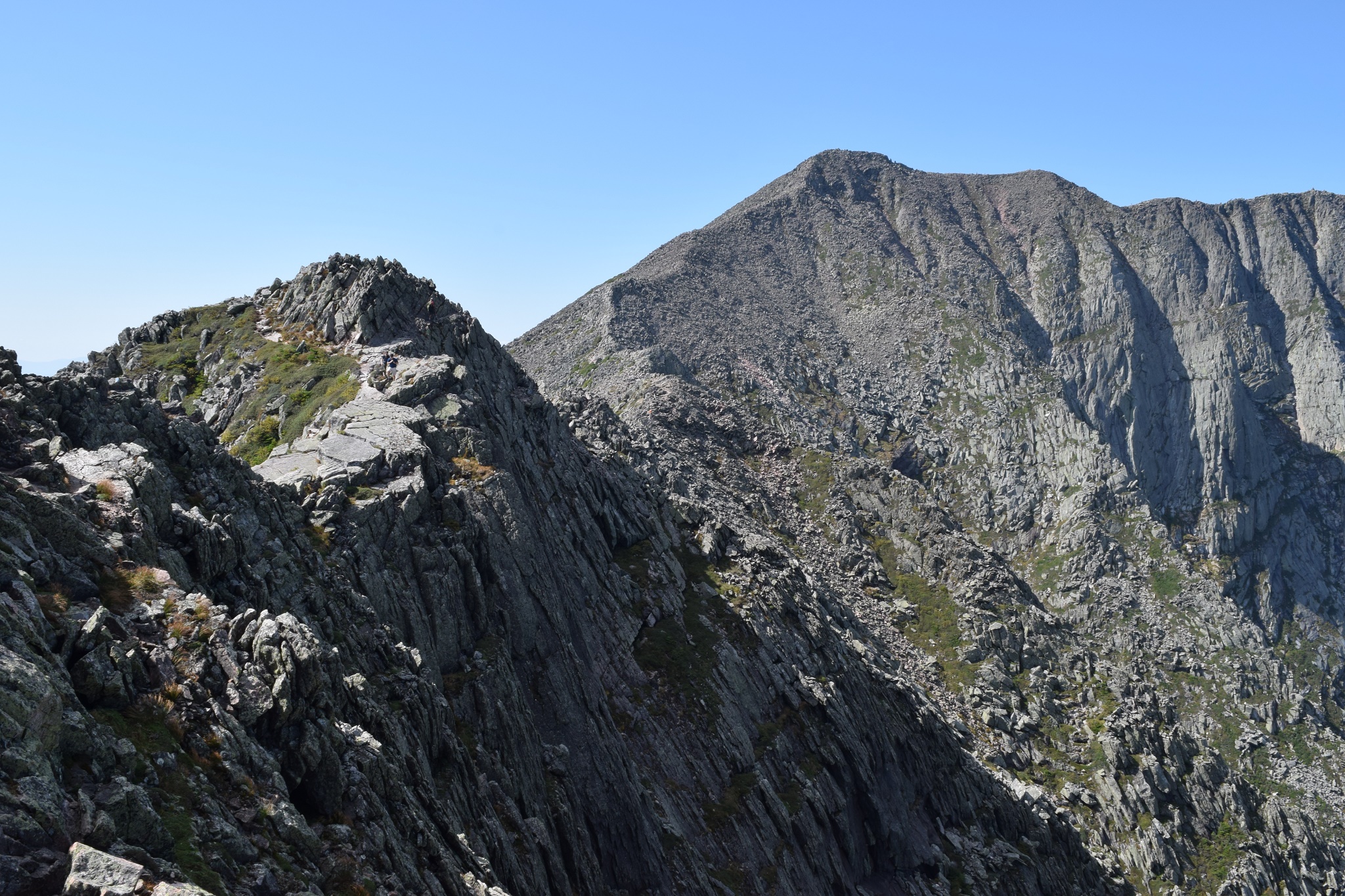 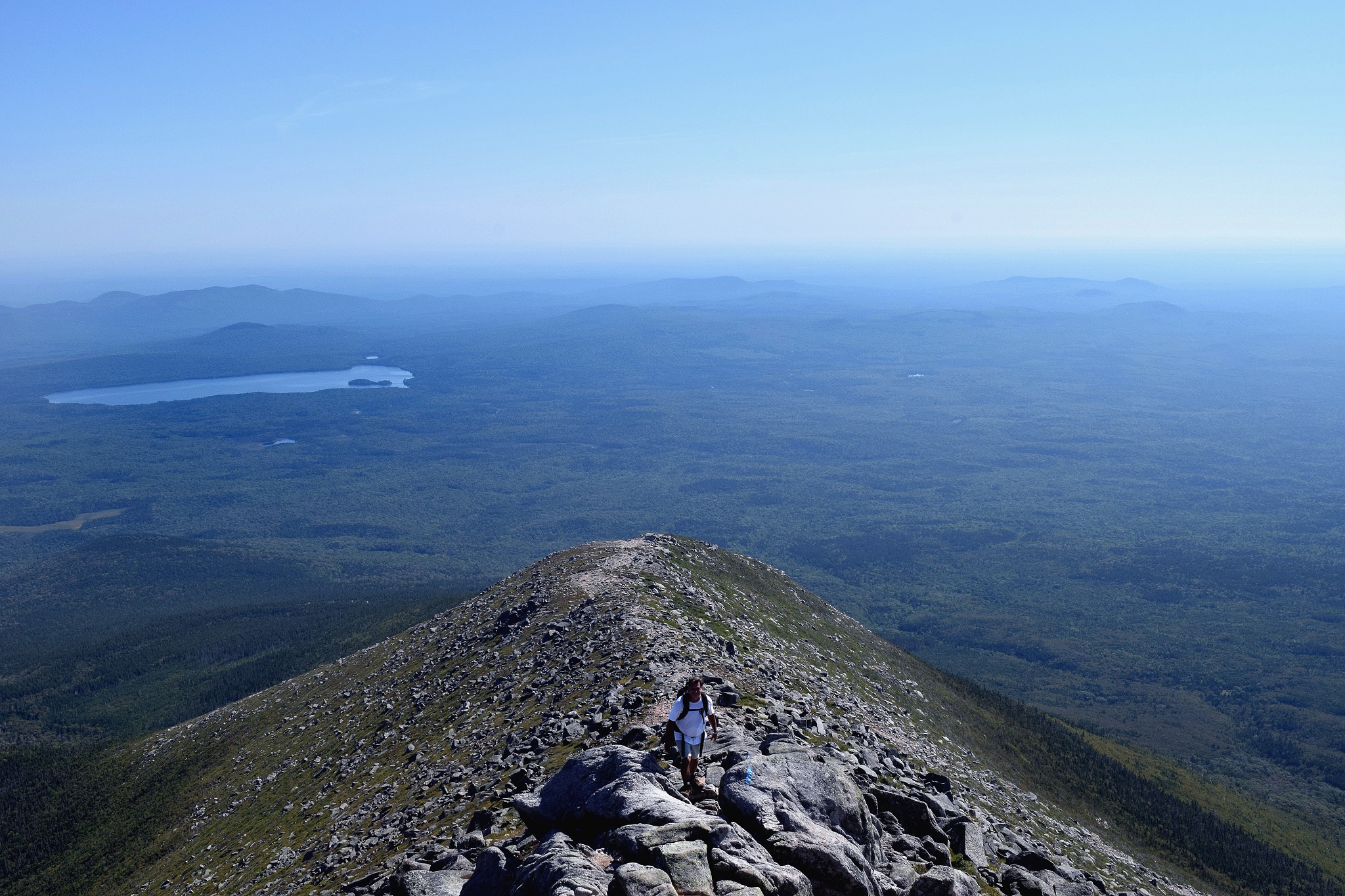 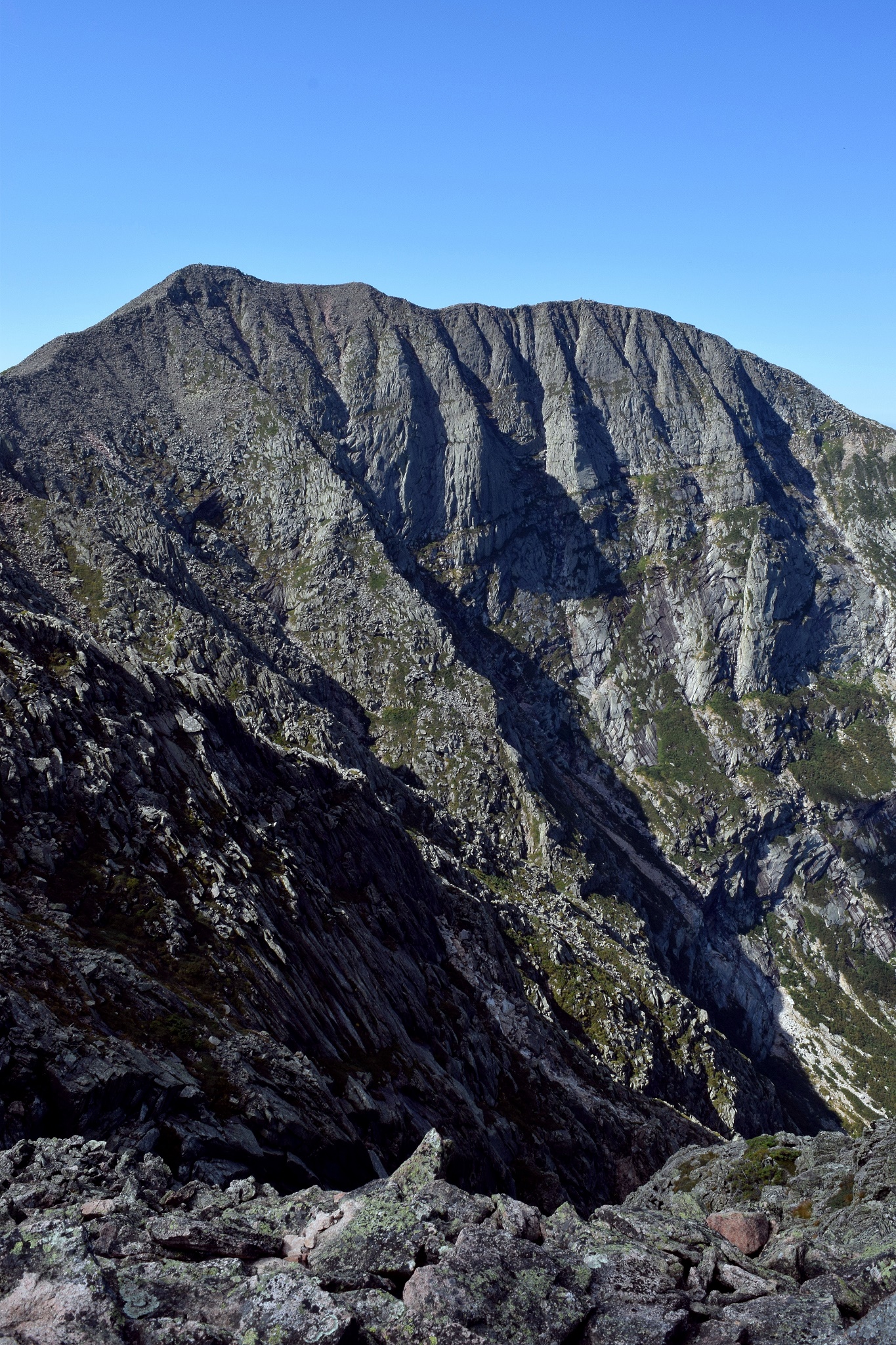 We met the enormous crowd of people at the top after experiencing the ‘Knife’s Edge’ traverse. It involved some real climbing and was a fun trail. We headed down, at some point Jimmy and I abandoned sore and fatigued Dad, and he hiked down with friends he made. We waited for him in the forest. The descent took many long, treacherous hours and we all became exhausted. It was wretchedly steep, common with the Appalachian trail, and a rocky, boulder strewn hike. Katahdin is, in my opinion, the most beautiful mountain in the northeast. 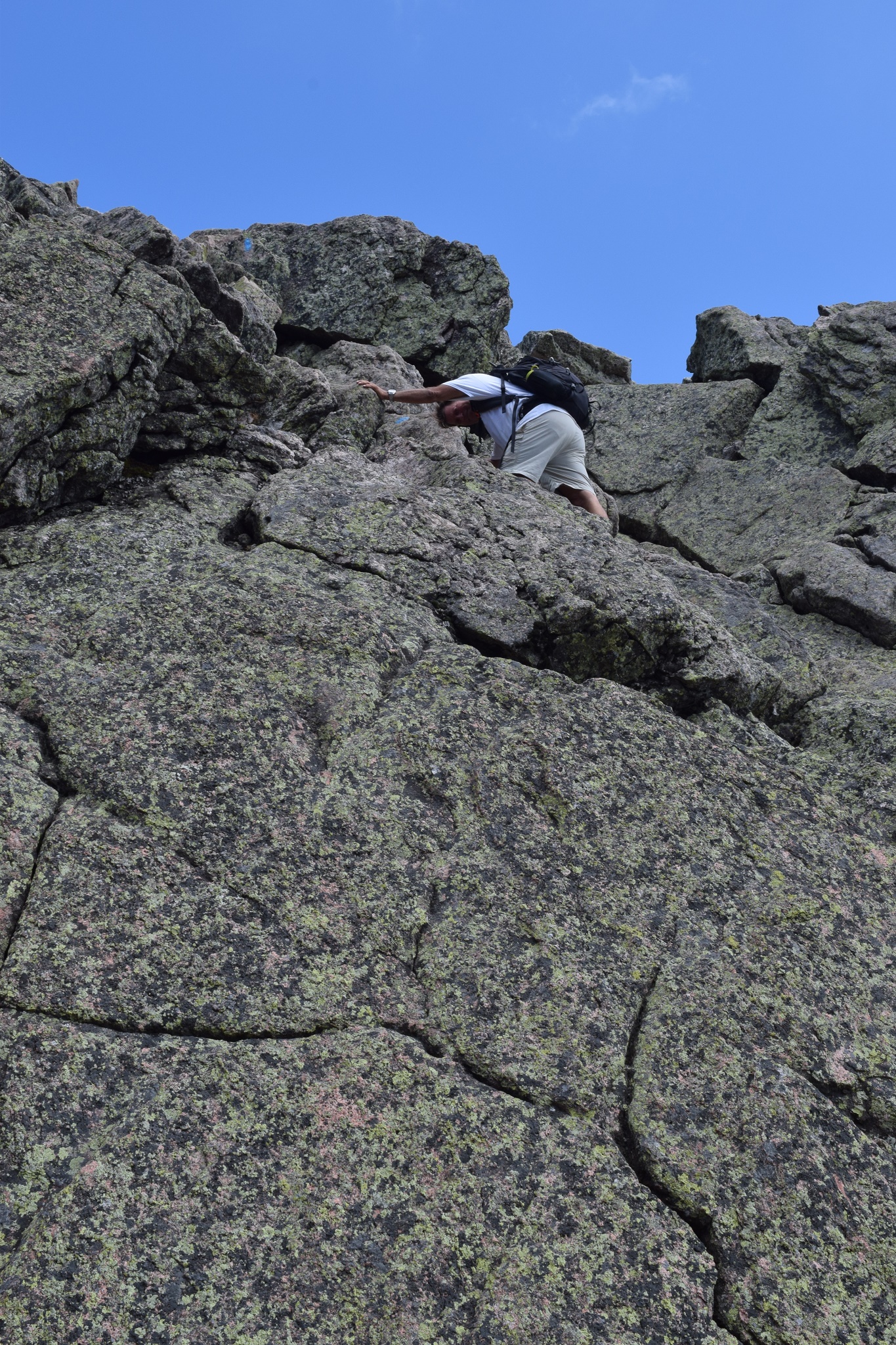 Dad climbing down the knife’s edge 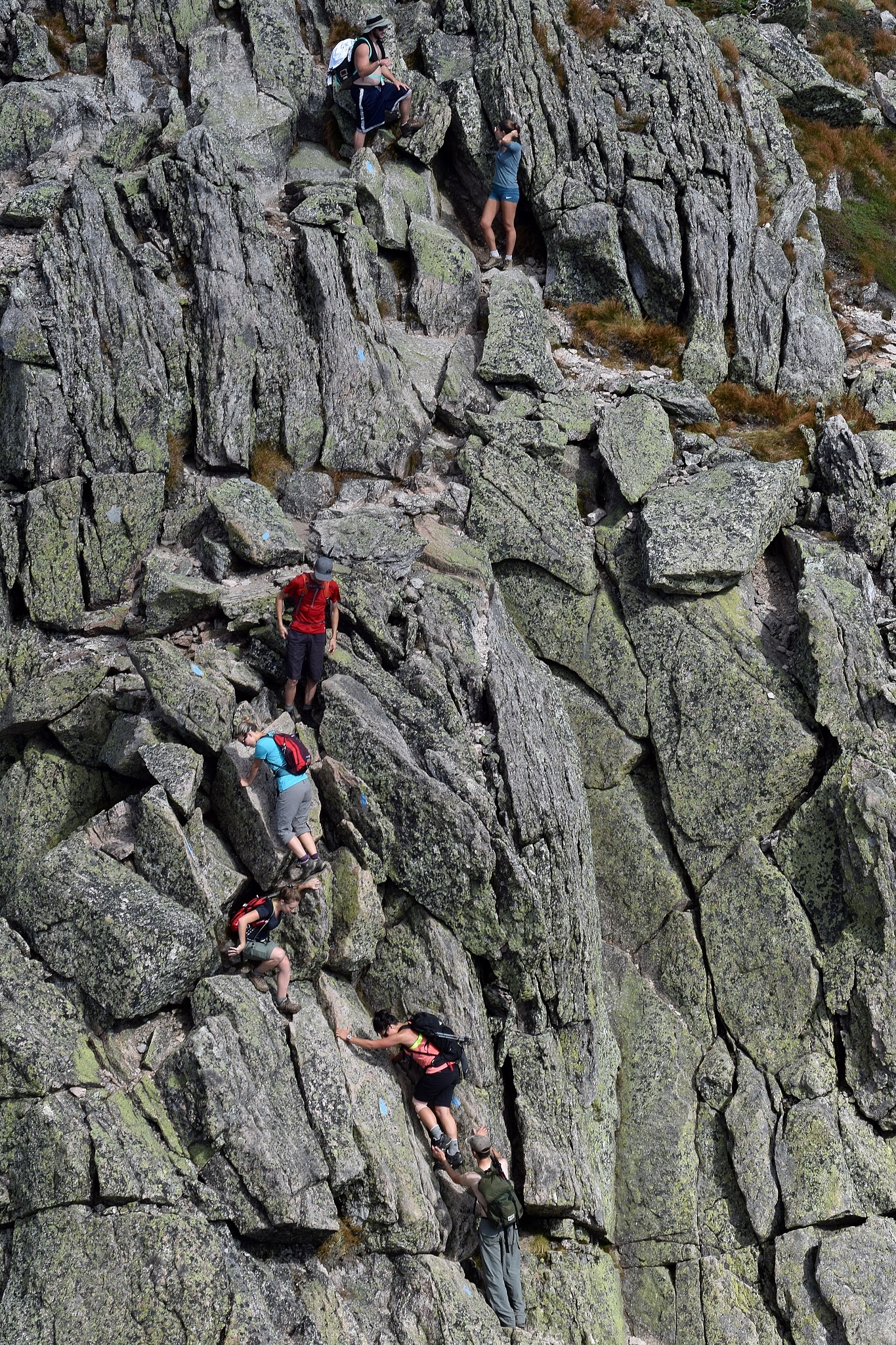 Lots of people enjoying the knife’s edge traverse. It was warm today with no wind even at the summit. 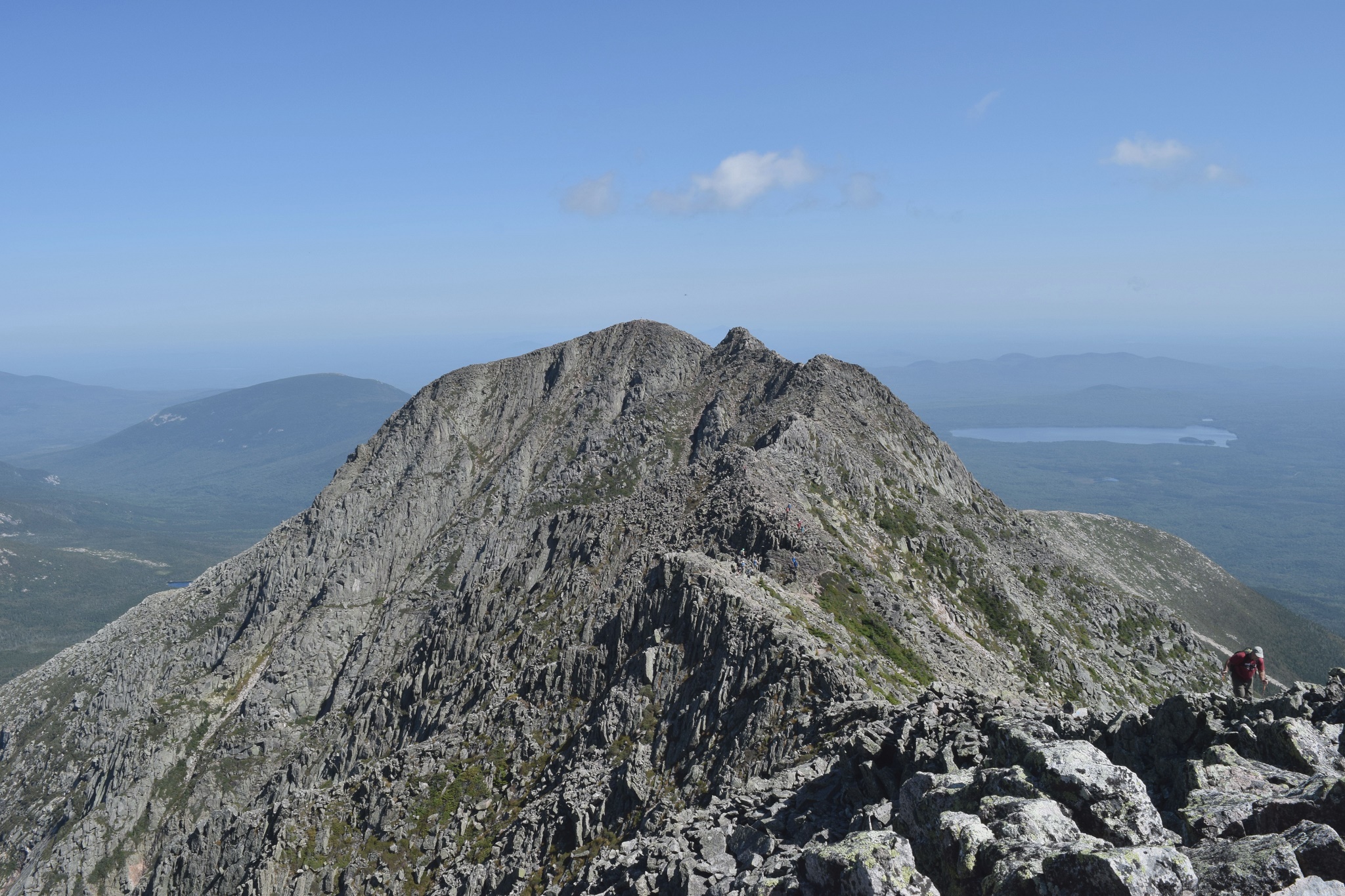 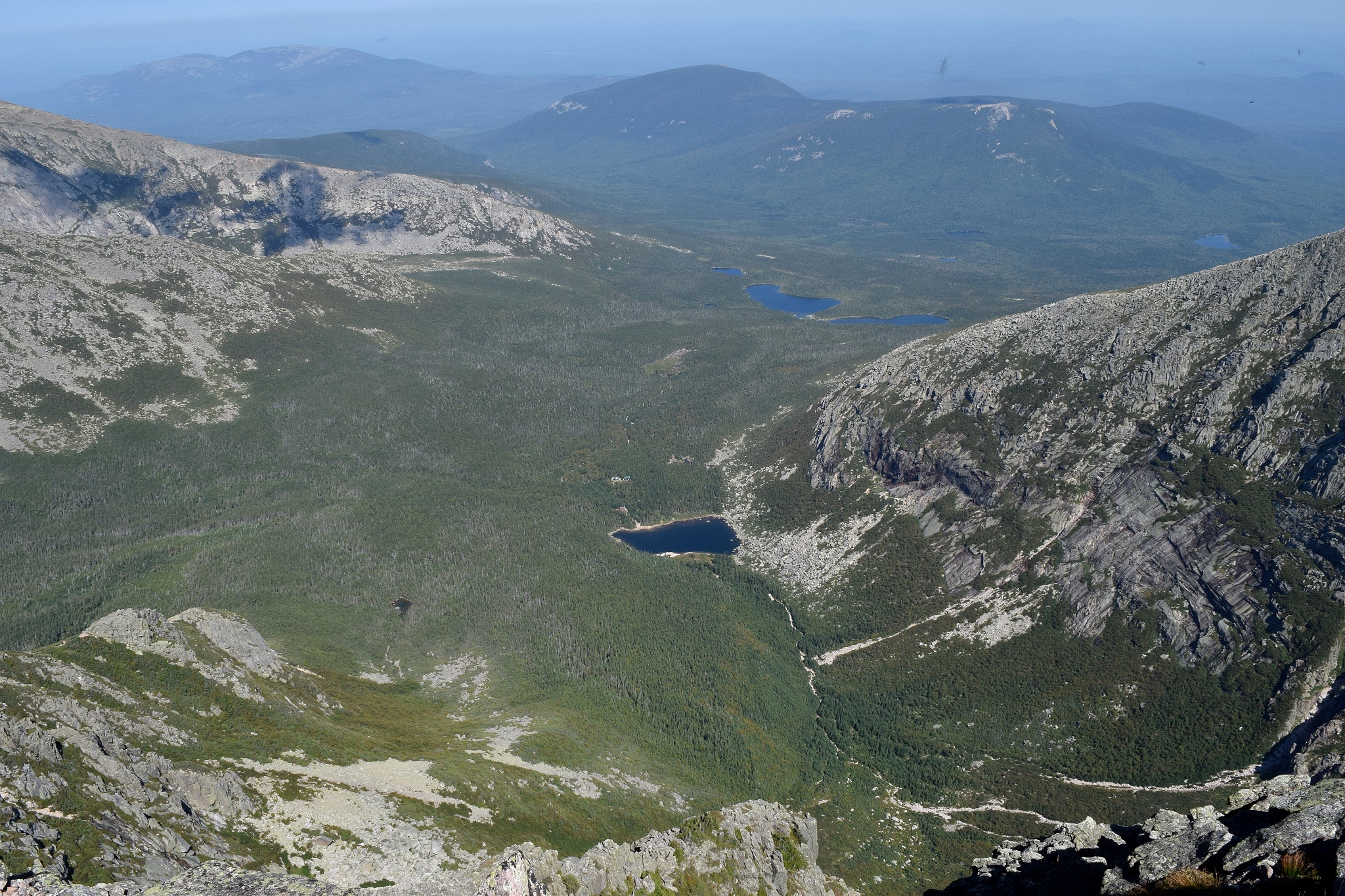 The view down from Katahdin’s summit 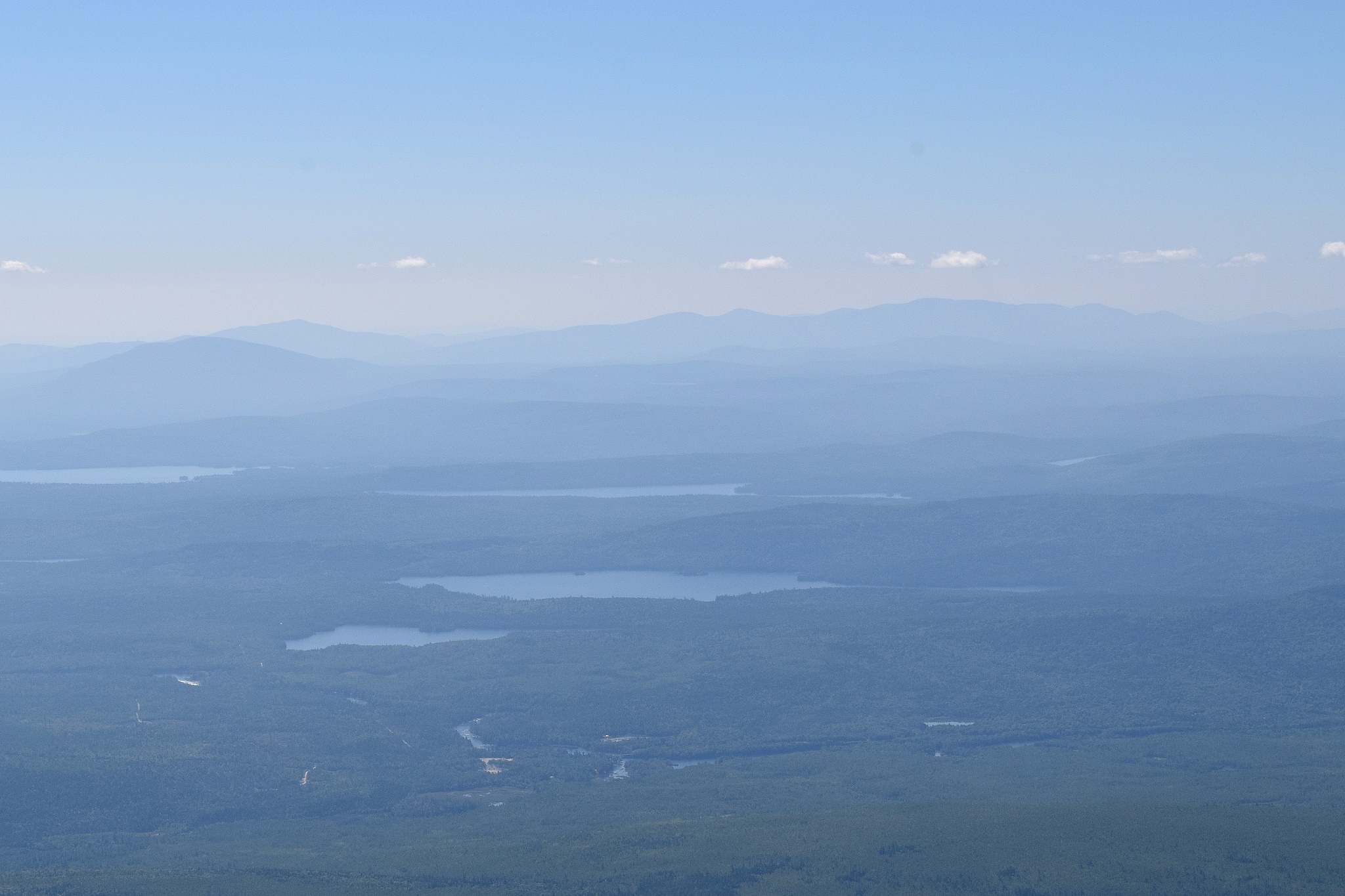 The Appalachian mountain which that great trail takes, looking south across the wilderness of Maine 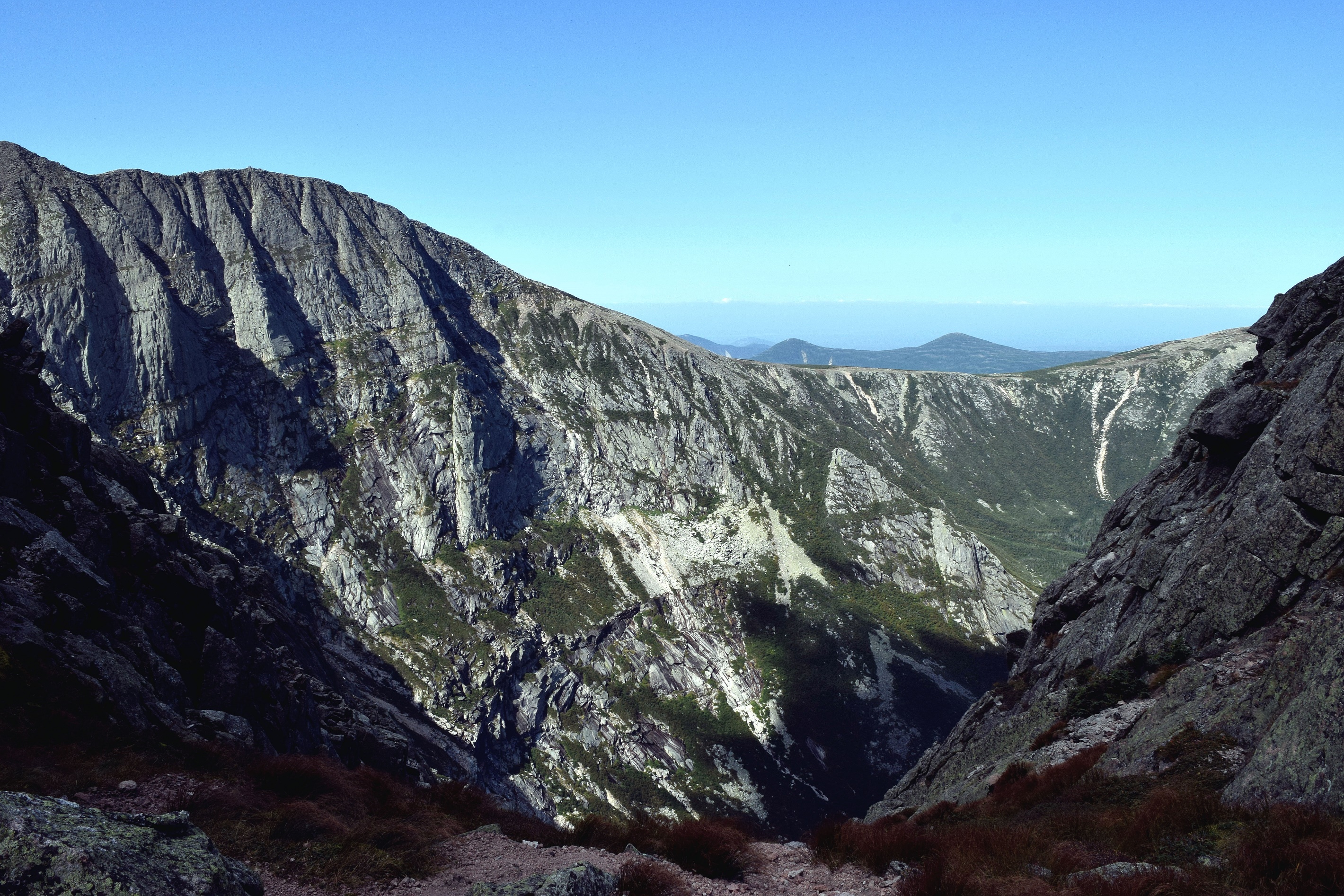 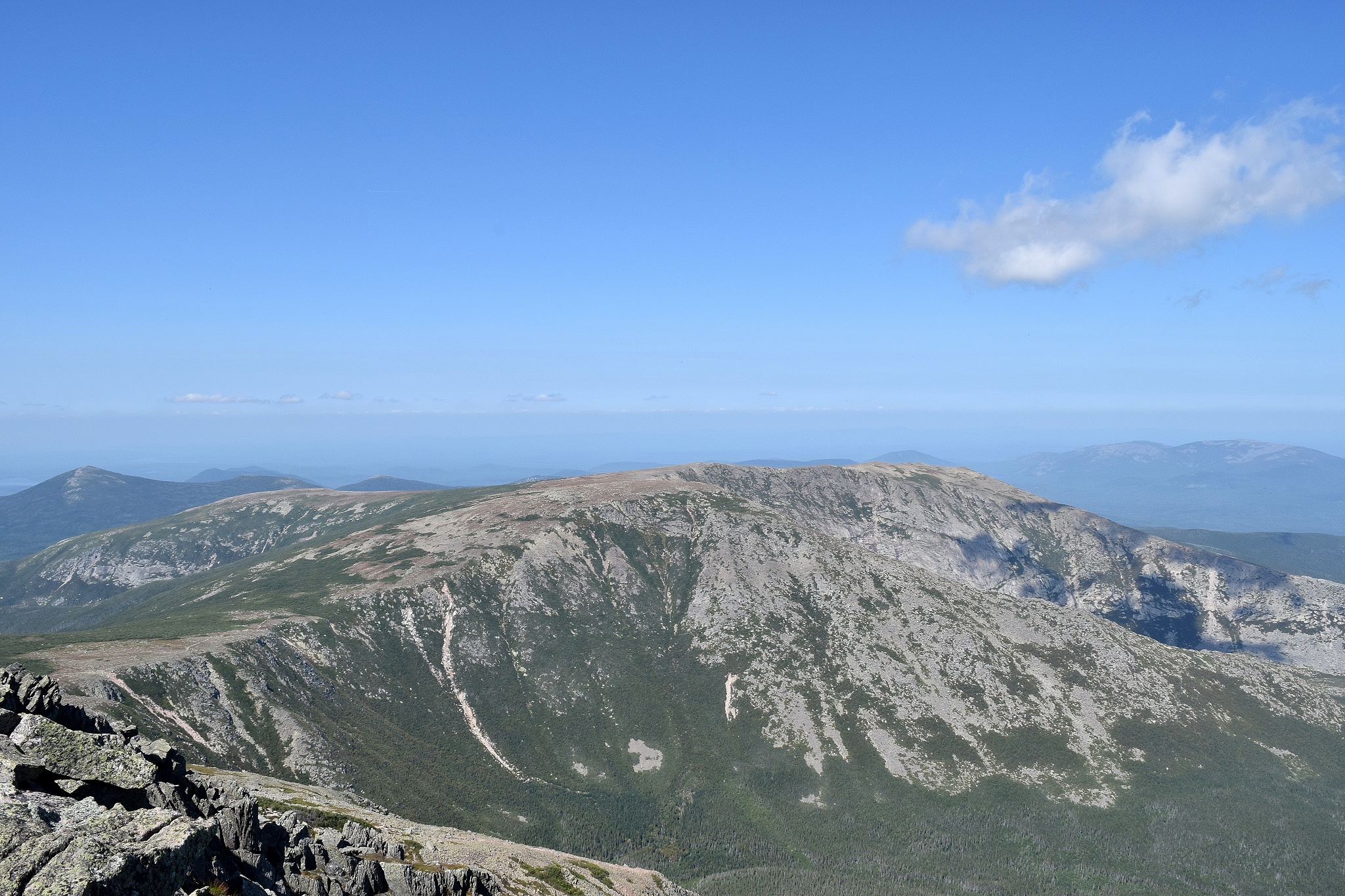 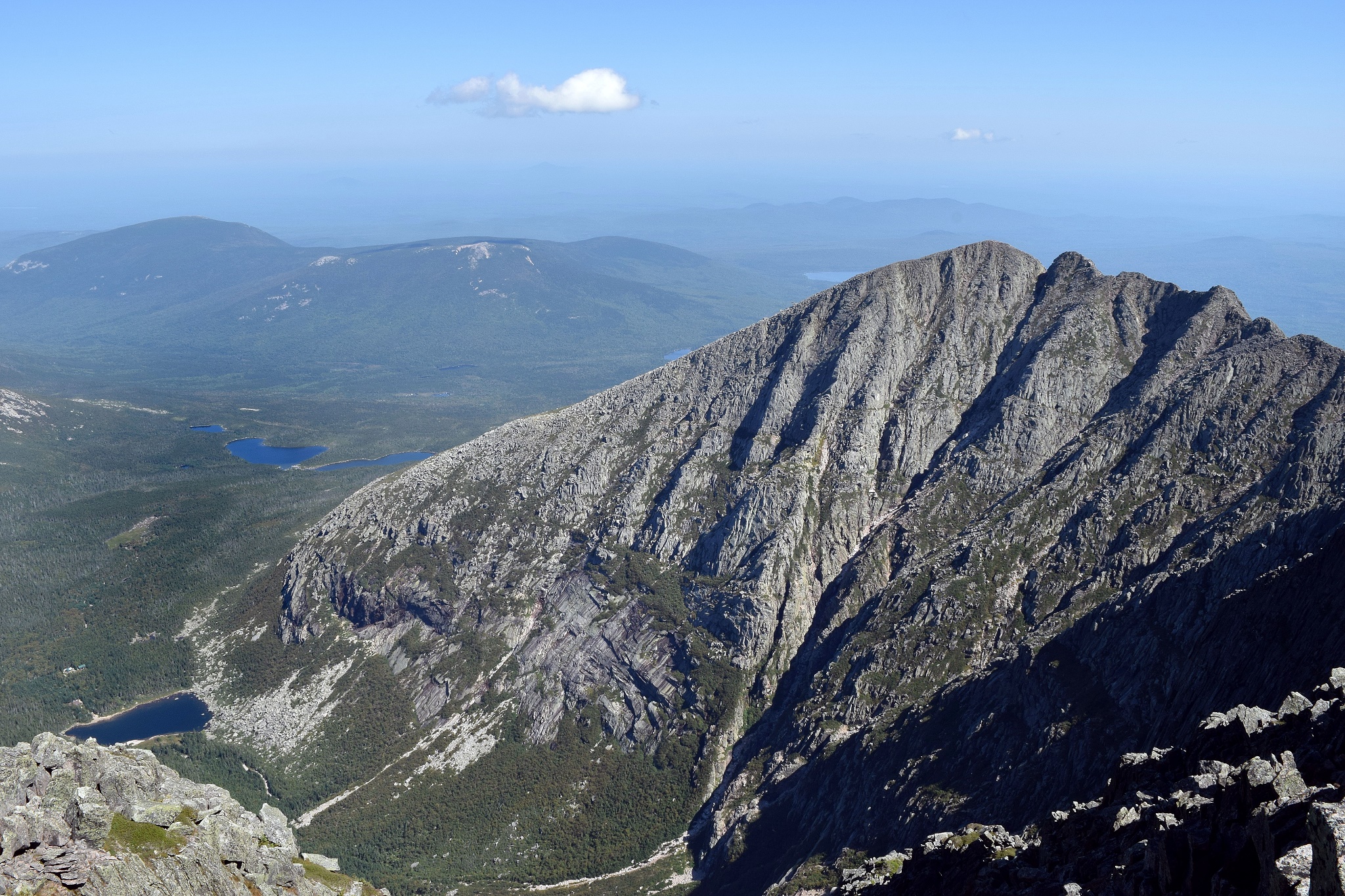 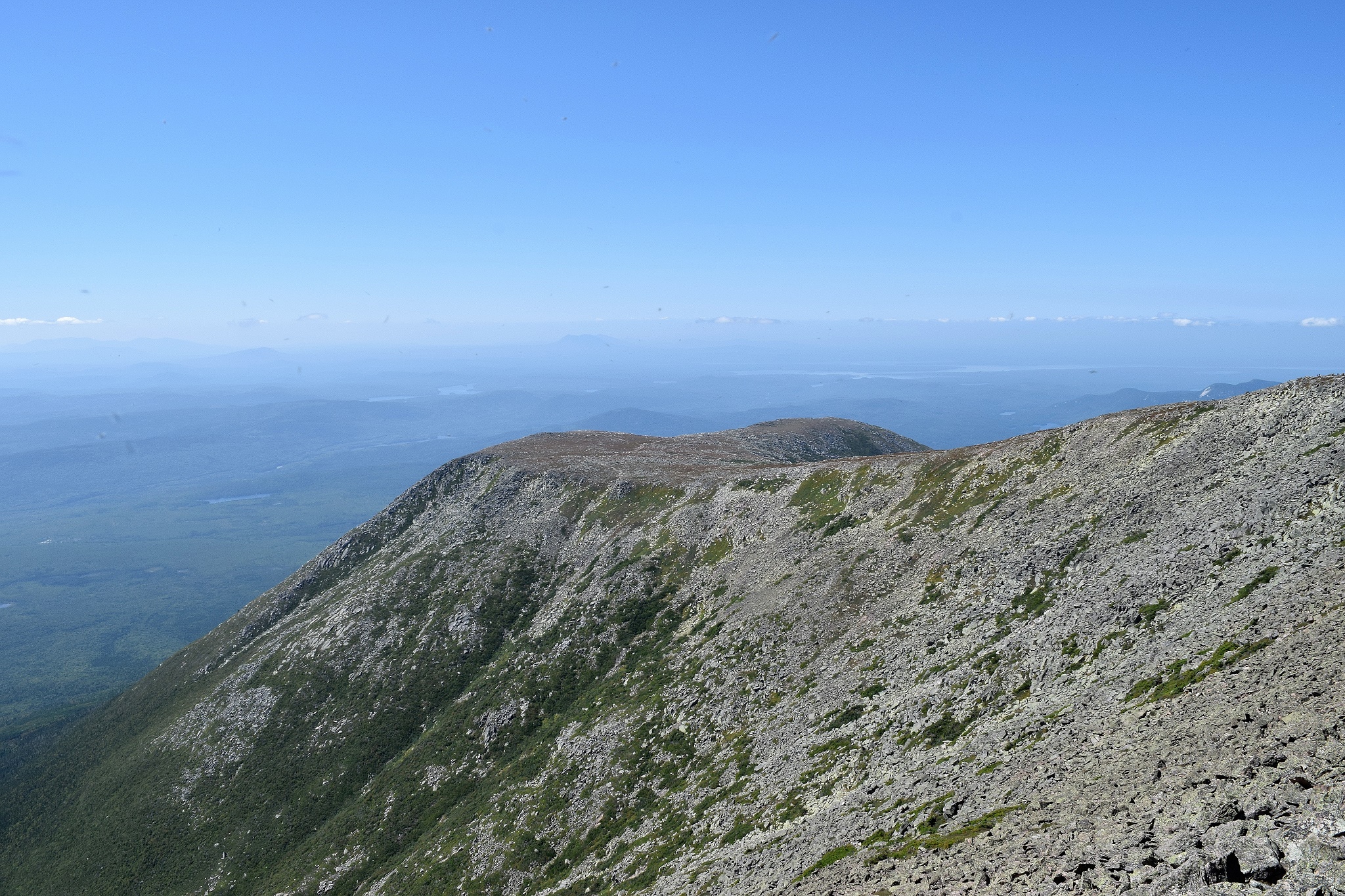 All day was tinged with worry over the illicitly parked truck, would it be towed? Would we have a ONE THOUSAND dollar ticket?! Jimmy and I ran the last few steps dying with curiosity, knowing we would feel so great if we in fact did get away with it. We got away with it, huzzah! We were all extremely fulfilled, a perfect and challenging day, and a good activity to do together. With that we left Katahdin, not to return until we hike the Appalachian trail eventually. With that we had a despicably rich and fattening meal at the Olive Garden in Bangor. 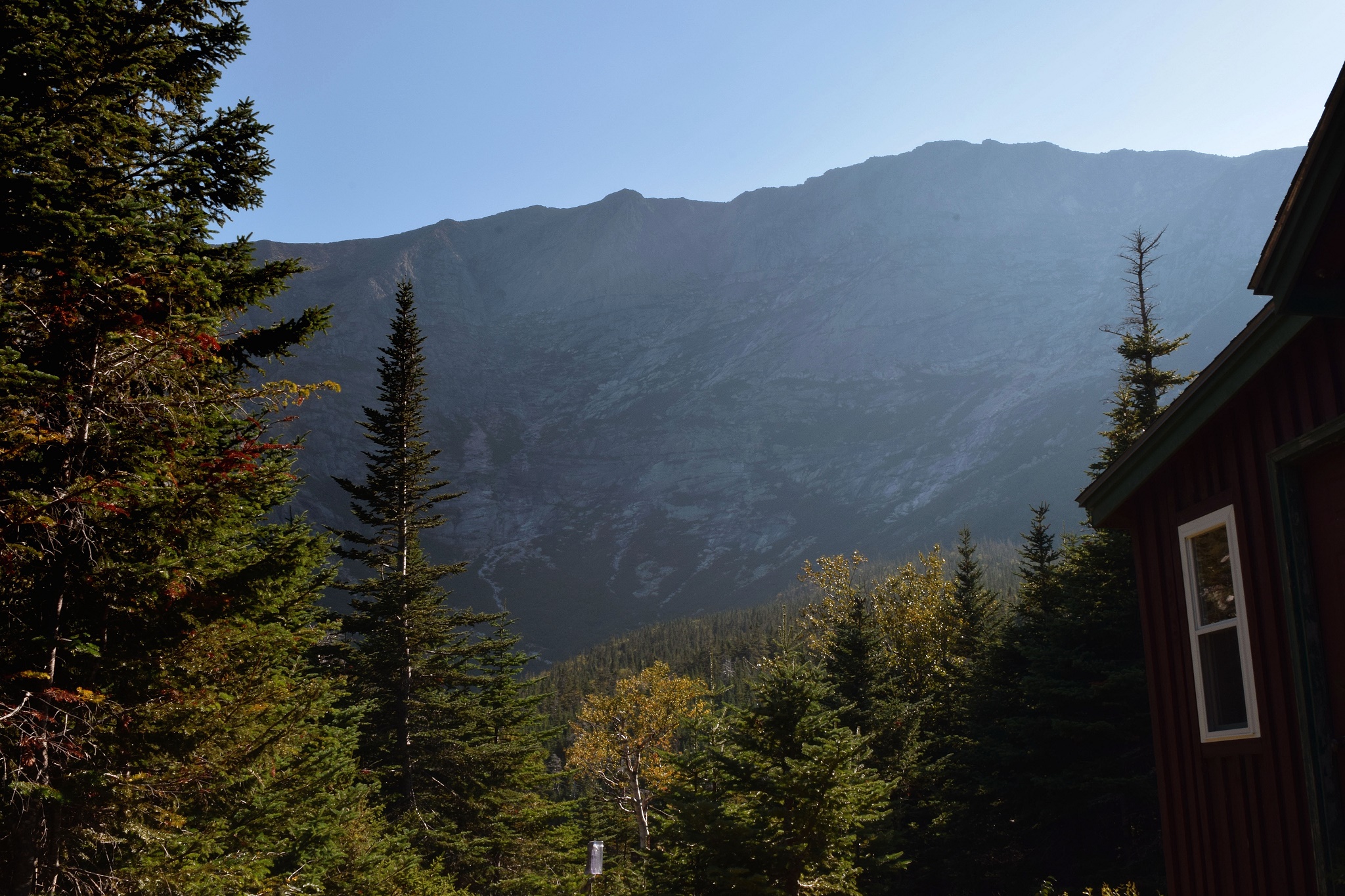