My three friends and I left Tahoe in the morning, a heavy snow had been falling but suddenly cleared to blue skies. We drove down the mountain pass and followed along a river through one of the most majestic forests we’d ever seen. Especially after spending so much time in the desert, the forests and trees of a wetter climate make an impact on your soul. Here in Tahoe, they mostly have the stoic, reddish Ponderosa pines with chartreuse Spanish moss clinging to them.

The temperature became warm when we made it out of the mountains, and now it felt like we were really in California. The land was peaceful grassy hills, green oak leaves, the smell of flowering trees and orange California poppies blooming along the roads. It’s crazy that after just a couple hours’ drive to Tahoe and you’ll find a place with 10 foot snow banks everywhere.

We couldn’t find our friend in Nevada City, and kept driving on. In Grass Valley, Mike bought a beautiful, small acoustic guitar at a music store. We hung out in the park for a while playing music.

Darkness came and we eventually made it to the mountains- the wilderness near the Trinity Alps and part of California’s coast ranges. We found kind of a weird spot that night, in a cold place near the tiny mountain town Platina…

We were driving this way across California because we wanted to go to the Redwoods, so in the morning we drove to the coast. The rain came on slowly, but by the time we were descending the mountains it was coming down in buckets.

The forest became spectacularly lush and enchanting, with flowers on the mahogany trees and then we passed through our first redwoods grove. You enter the redwoods and a green darkness takes over the road. A reverent silence also seems to begin as you stare upwards, winding through the massive trees. 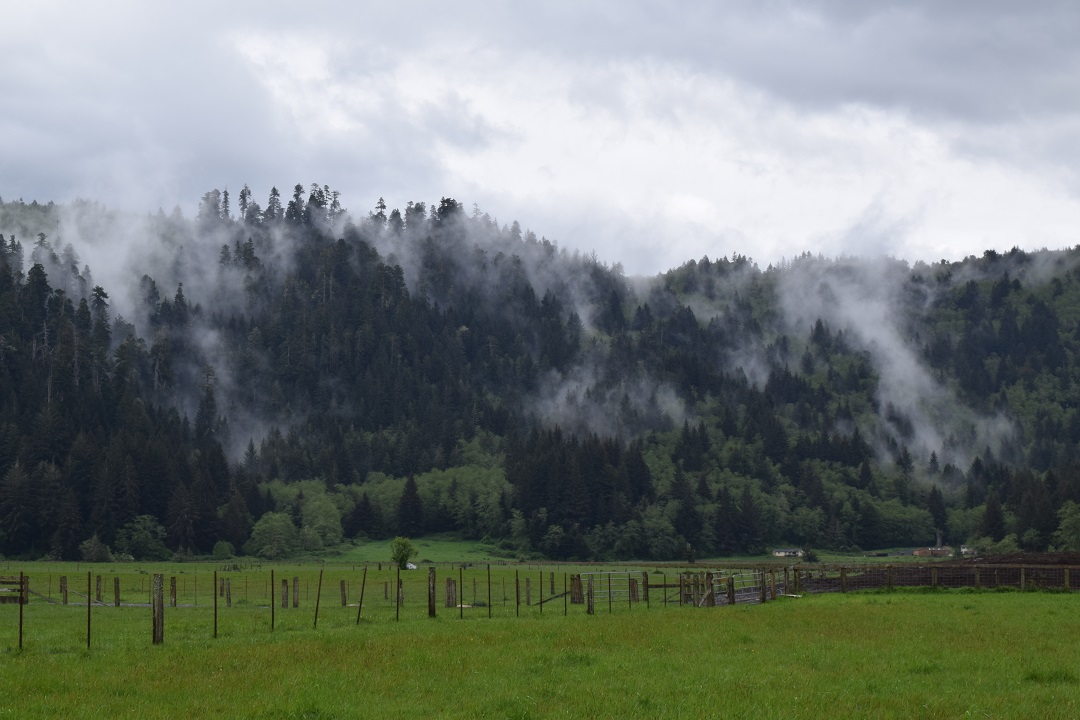 We made it to the Pacific Ocean and walked on the beach. It was still cold and rainy all day. From there we drove to Jedidiah Smith State Park to a campground where Ben’s friend from high school happened to be camping, as she was currently on a road trip as well.

We went into the redwoods grove at the state park and were immediately in love with the place. The campground had a wide and shallow stream with gravel beaches cutting through the otherwise luxuriously dense rainforest. The stream was glowing a haunting aquamarine. The tall trees were all around us and carpeted with moss and ferns. 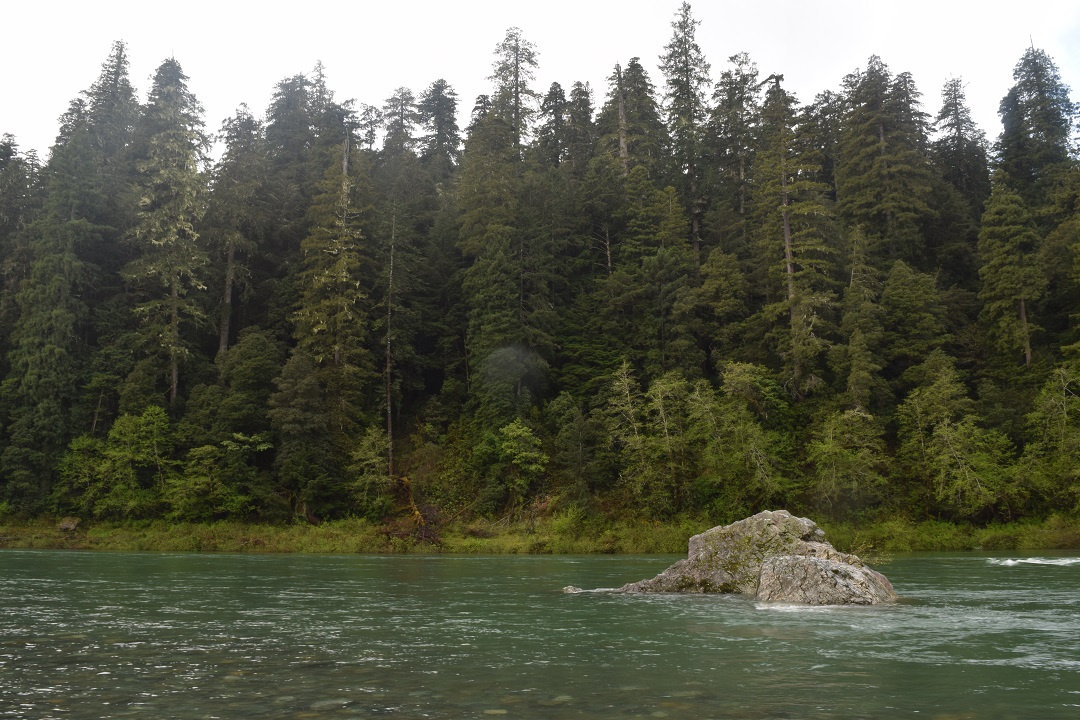 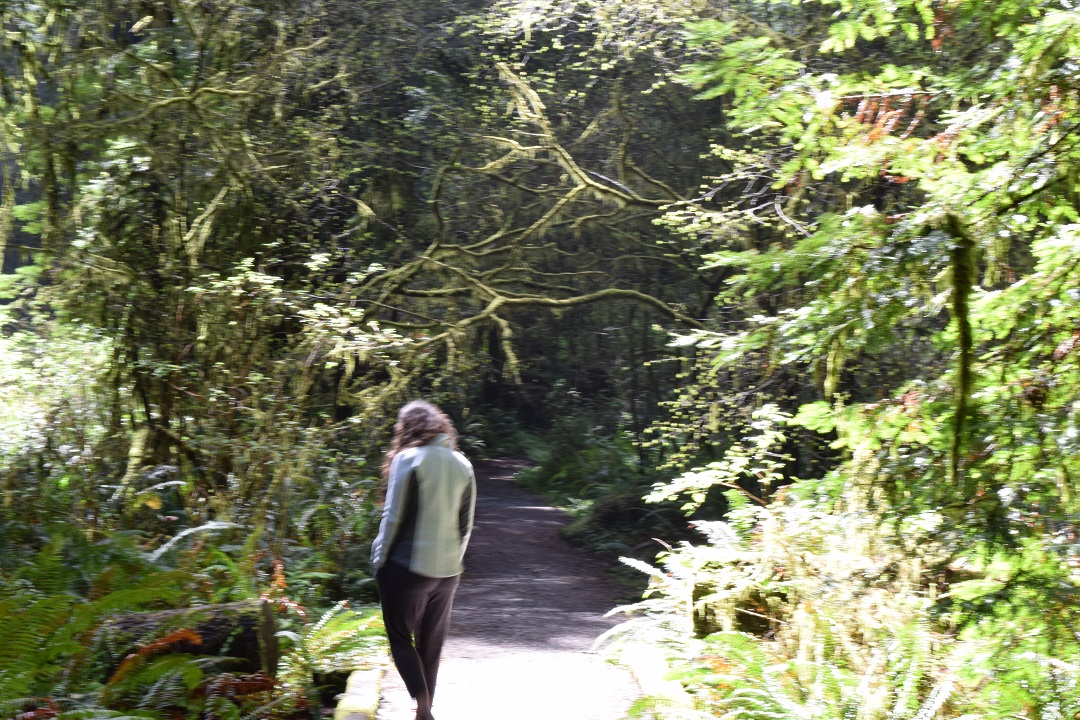 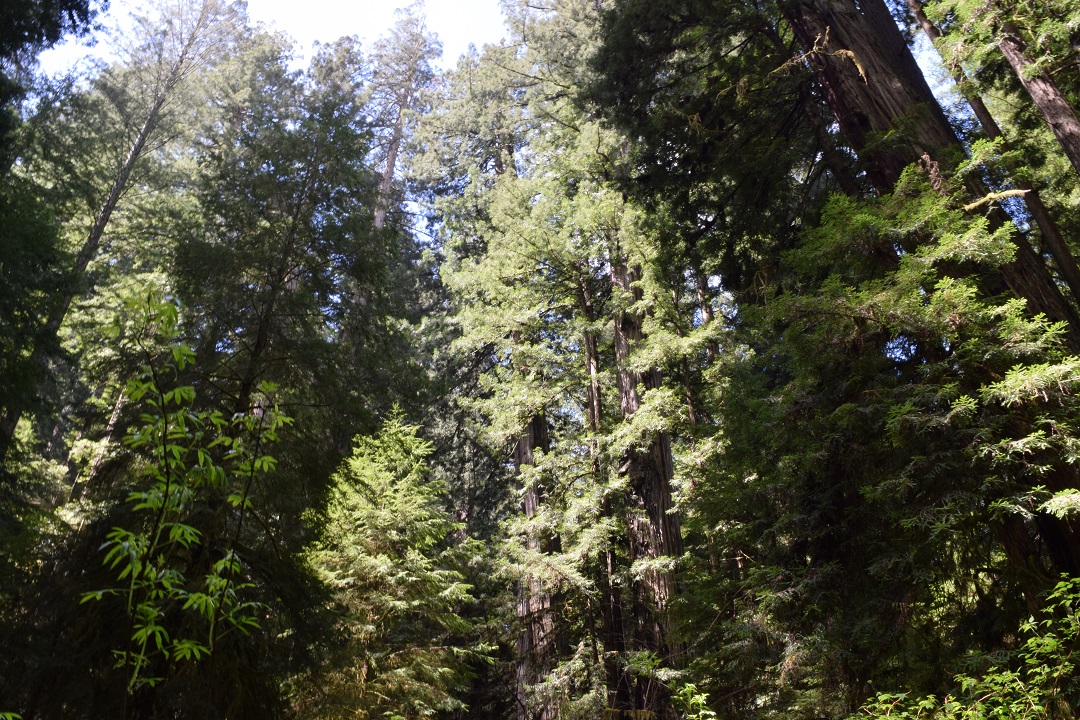 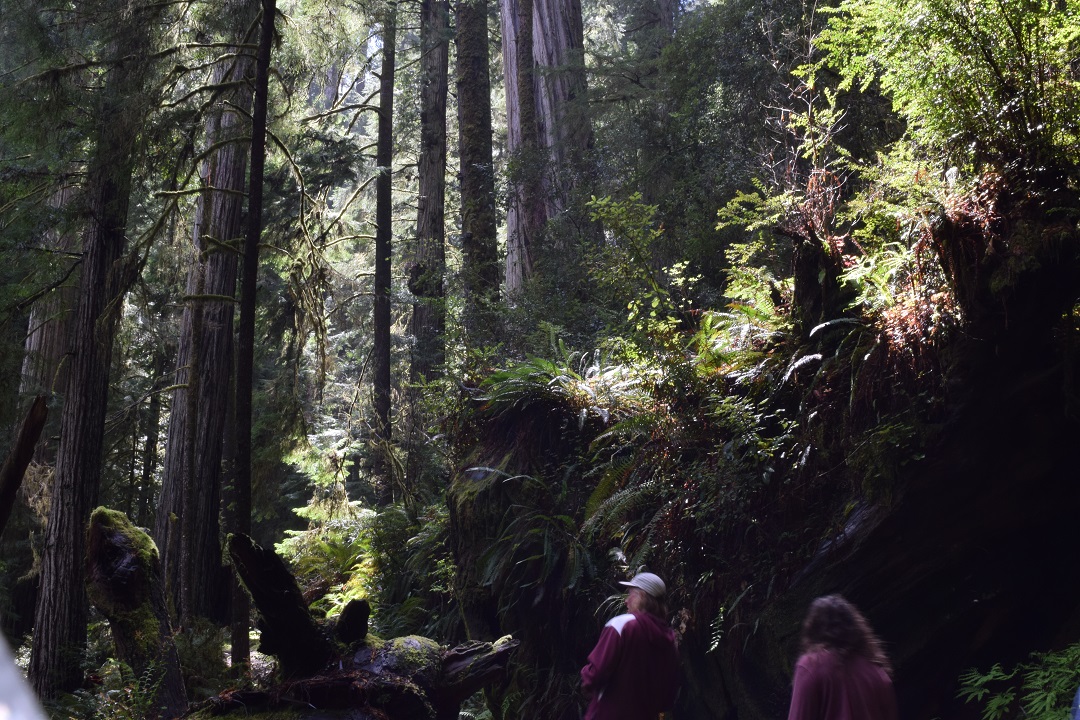 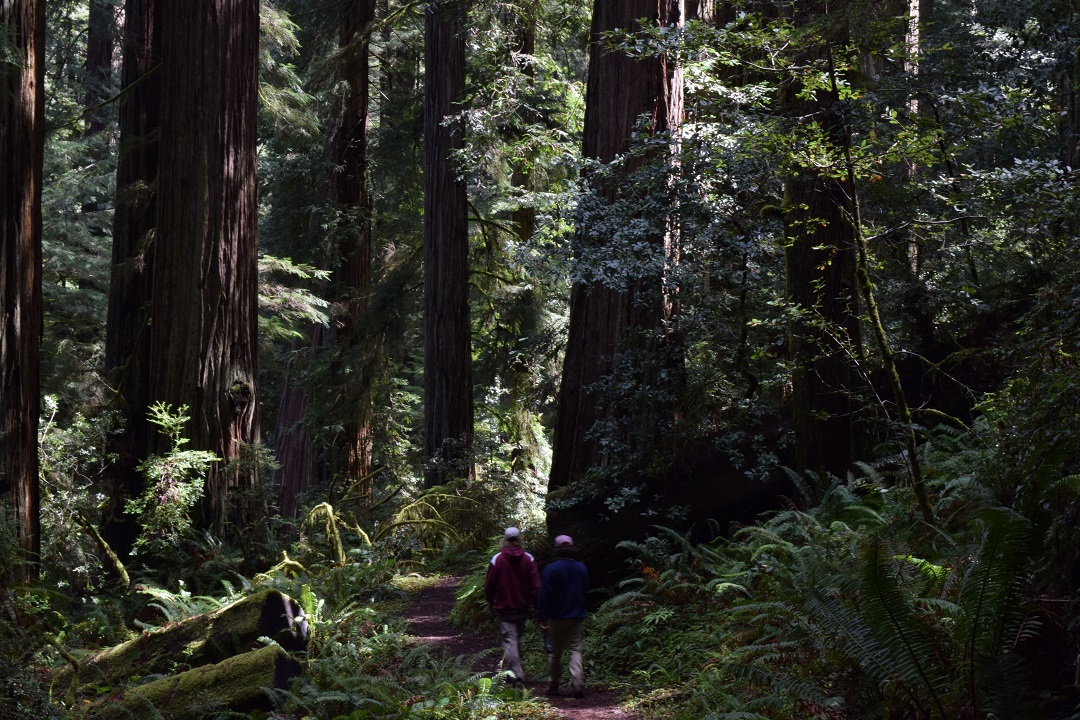 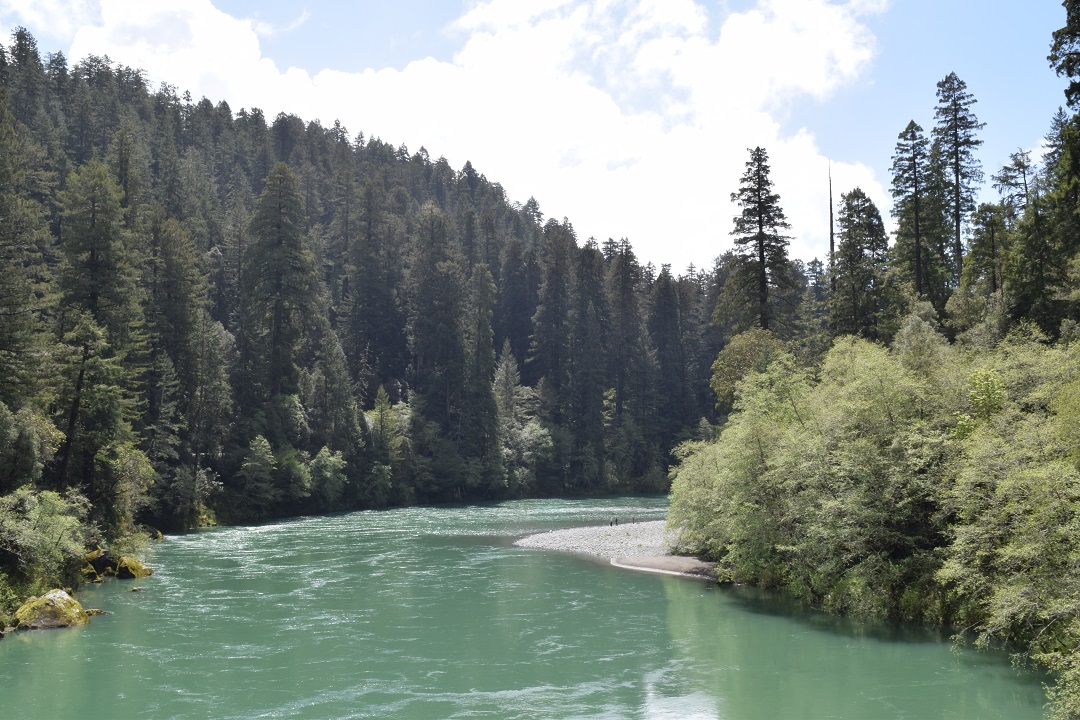 We met the two girls who had a camp spot in that forest, and they were happy to see us. It had been raining so hard, and they had been just hiding under a tarp which had slipped very low to the ground, listening to music and chain smoking cigarettes all day. The earth below the tarp had finally become one big flooded puddle.

We weren’t allowed to tie the tarp to the trees here, but using the bicycle which stands upright on top of my truck, we were able to set up the tarp better. We turned it into an awesome living space to fit the 6 of us around my truck. I cooked lentils there and we listened to the rain crashing down all around us. We stayed totally dry. Psychotic lightning and thunder cleaved the sky all night.

In the morning we left and drove to Oregon. The coast was spectacular and we stopped at the beach for a long time. We climbed boulders there, ran around, and swam in a huge freezing tide pool.

The enormous waves were braking on the sea cliffs and putting on a show for us to watch. The whole south coast of Oregon is sweeping beaches studded with massive boulders. We didn’t go far today, and camped for the night by the Elk River, flowing through its narrow canyon in a brilliant turquoise hue. 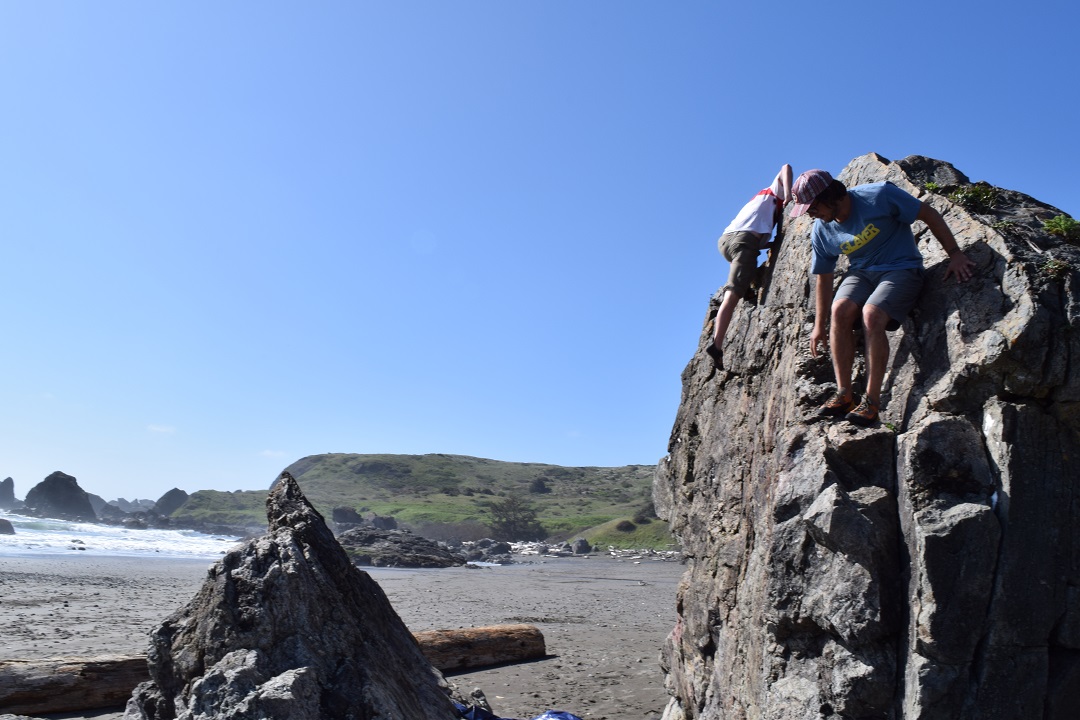 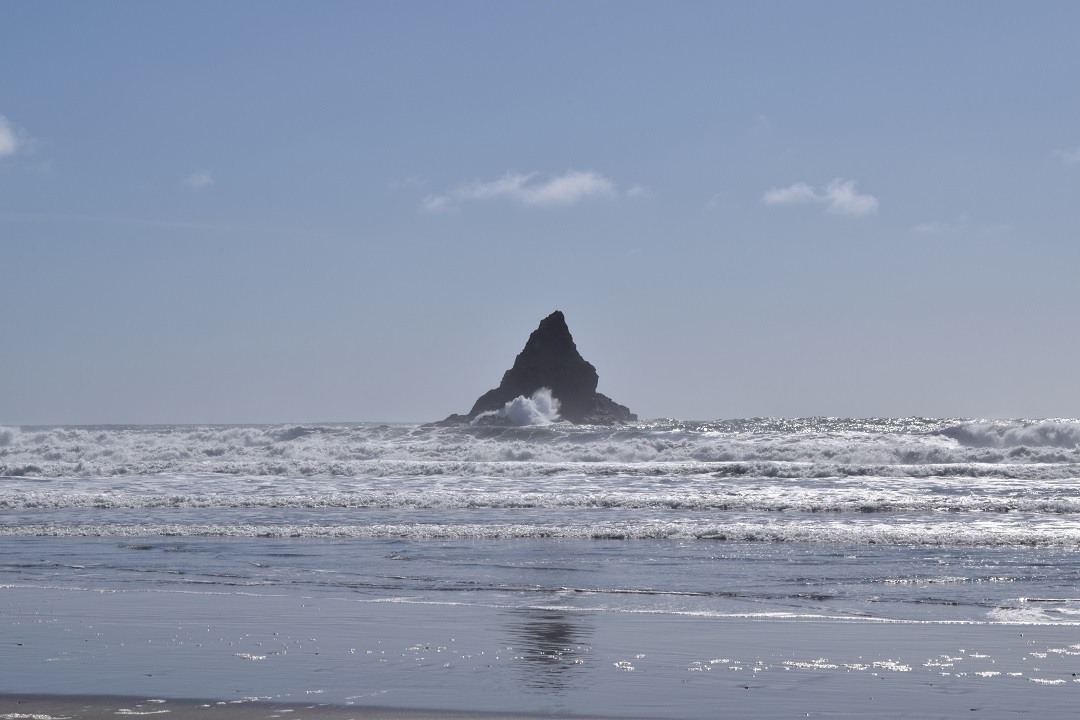 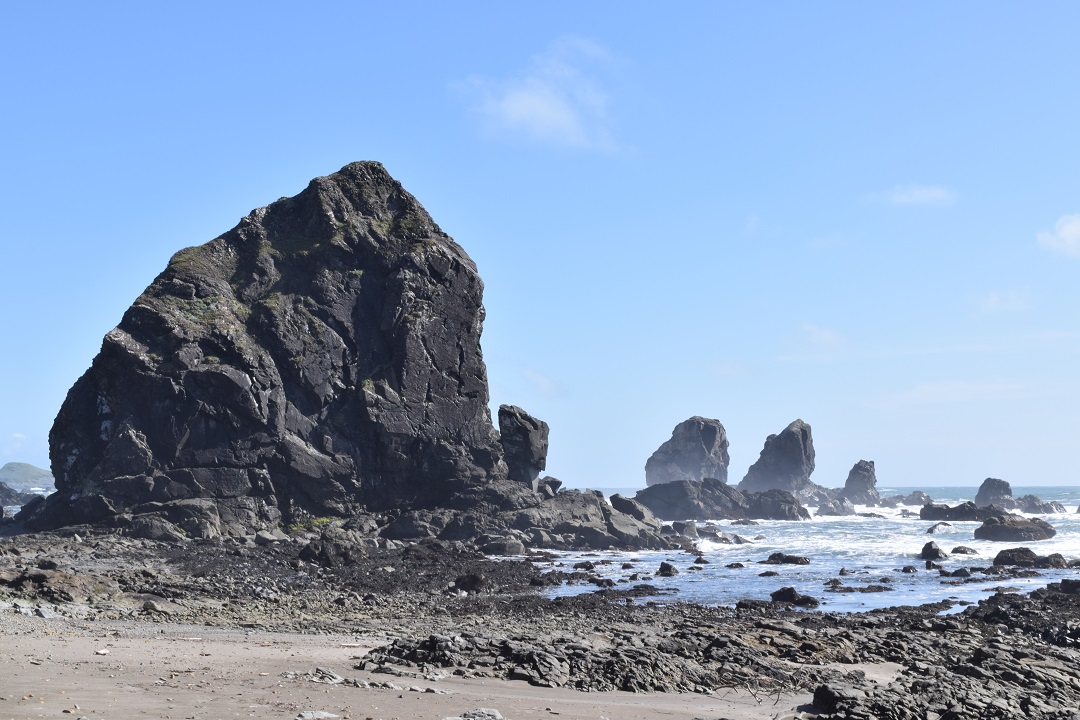 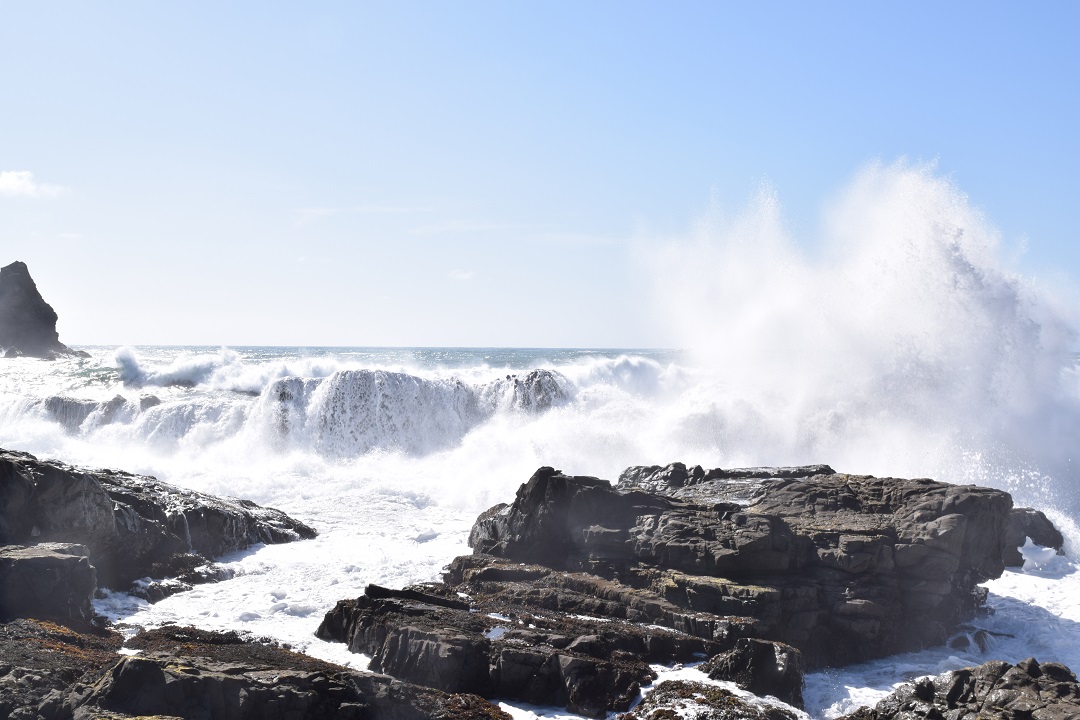 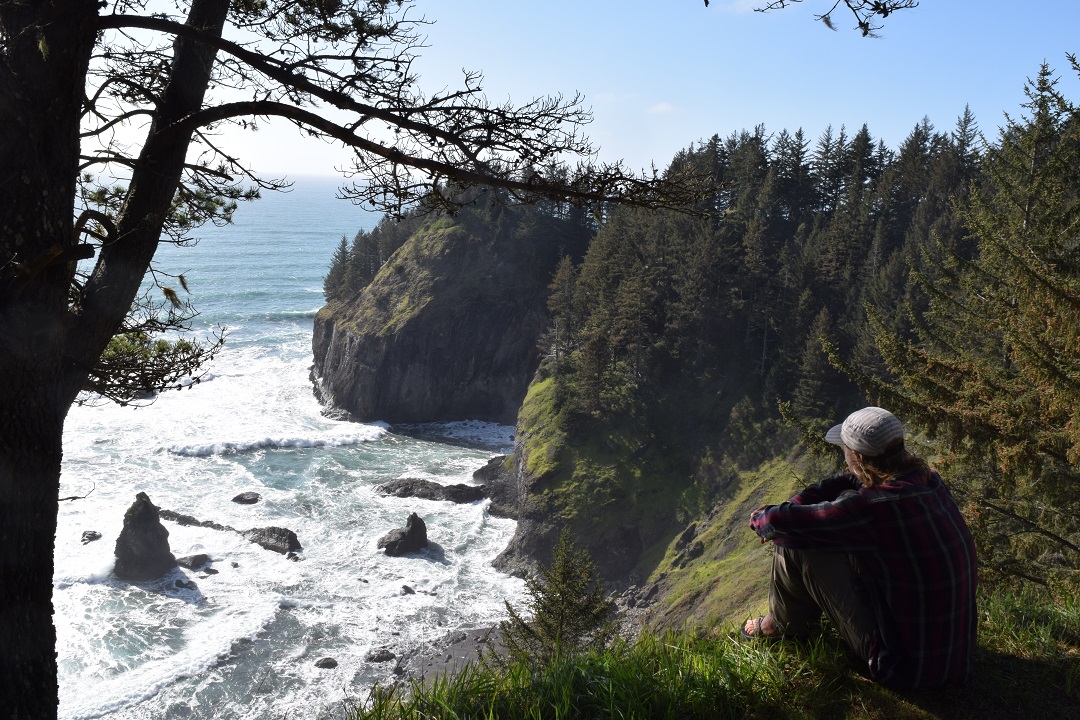 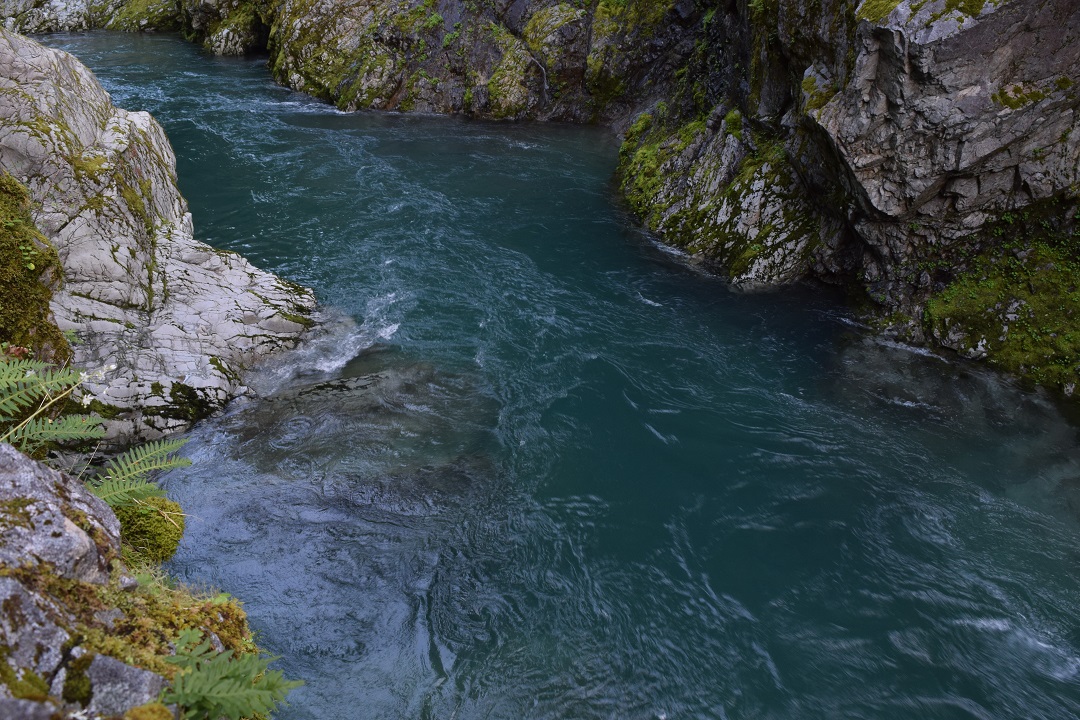 The next day we were driving across Oregon. Ben lost his phone. We drove 15 minutes back to look for it and when we got there, we found it on the roof of the truck… How that happened I will never know, but the phone had wedged itself into the roof rack in the perfect way.

Meredith and Mike had no working phones in their vehicle we realized, and when we turned around we became separated. They didn’t see us pulled over, they didn’t know we had turned back and there was no way to contact them.

We were separated for about 3 hours, and chased them up the coast. Eventually we stopped and ate pizza, they had stopped to eat somewhere else, and then we reconnected.

We drove now towards Bend where we would visit another friend. That night we camped in a wet and spooky forest in the Cascade Mountains.

In the morning it was raining and snowing on us. We drove down the eastern side of the mountains back into the desert! It was much warmer and drier at the bottom, and we ate breakfast at a café in the town of Sisters.

Bend is a pretty cool city in the Oregon volcanic desert. It is surrounded by a pine forest, and hiding in that forest is mysterious black rock canyons and cliffs, all kinds of marvelous spots.

We met a friend of Ben’s, Wade, who came camping with us at a perfect spacious spot. He had a crazy dog that simply didn’t like me, and barked at me the whole time. We setup our slackline, played music and continued practicing for our traveling circus. 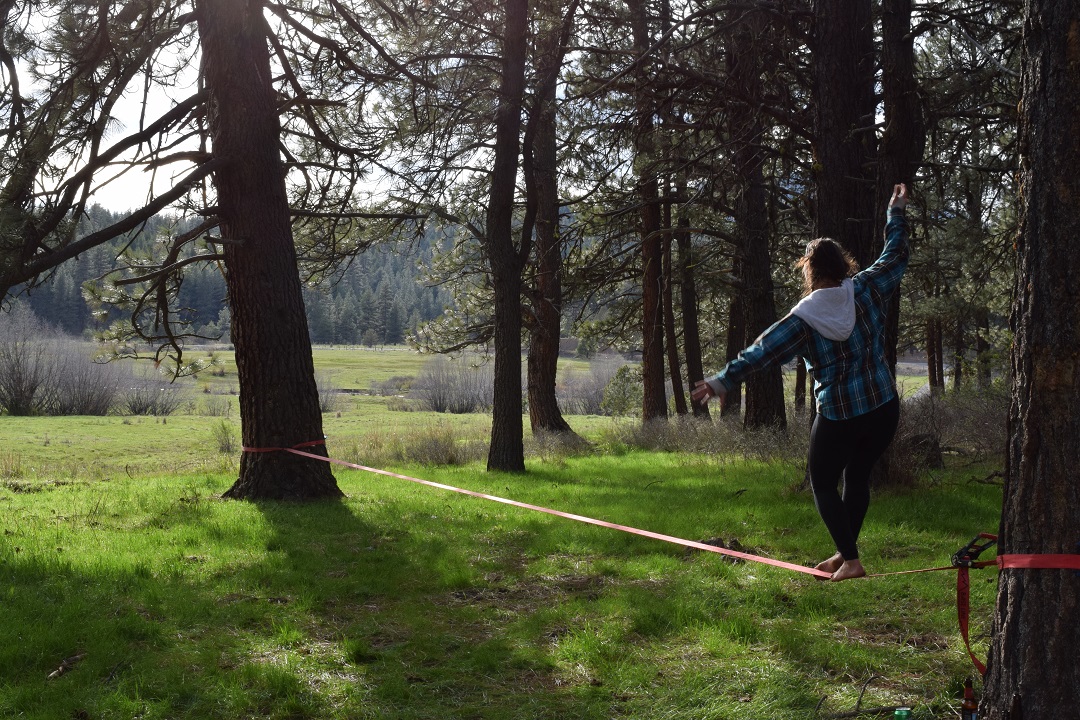 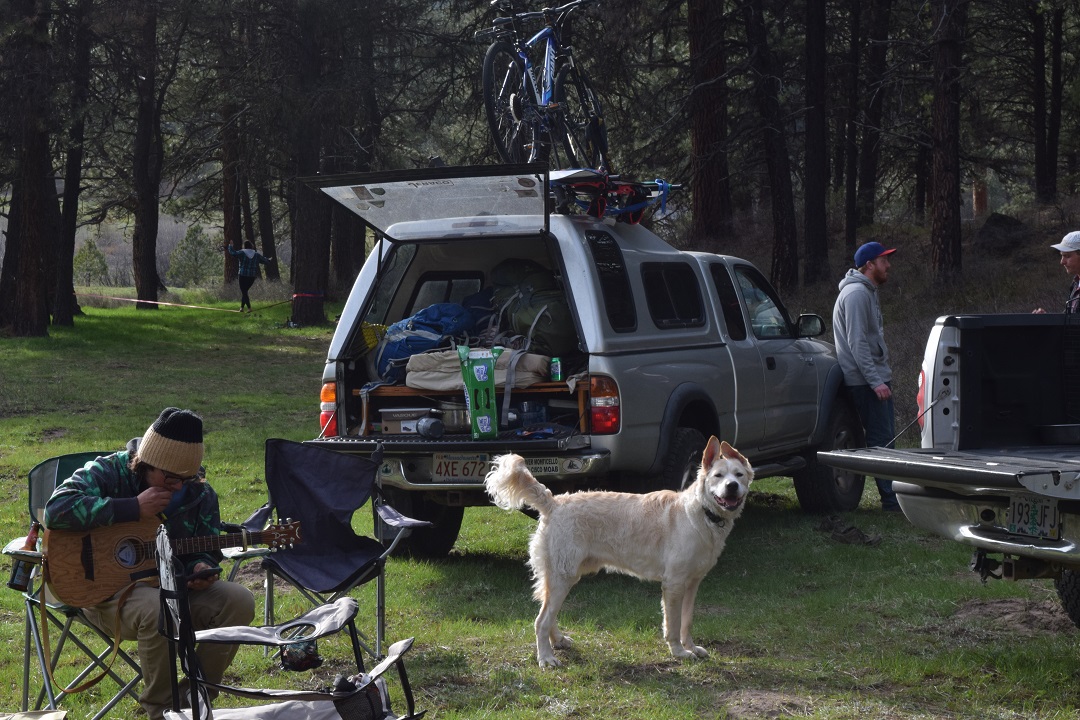 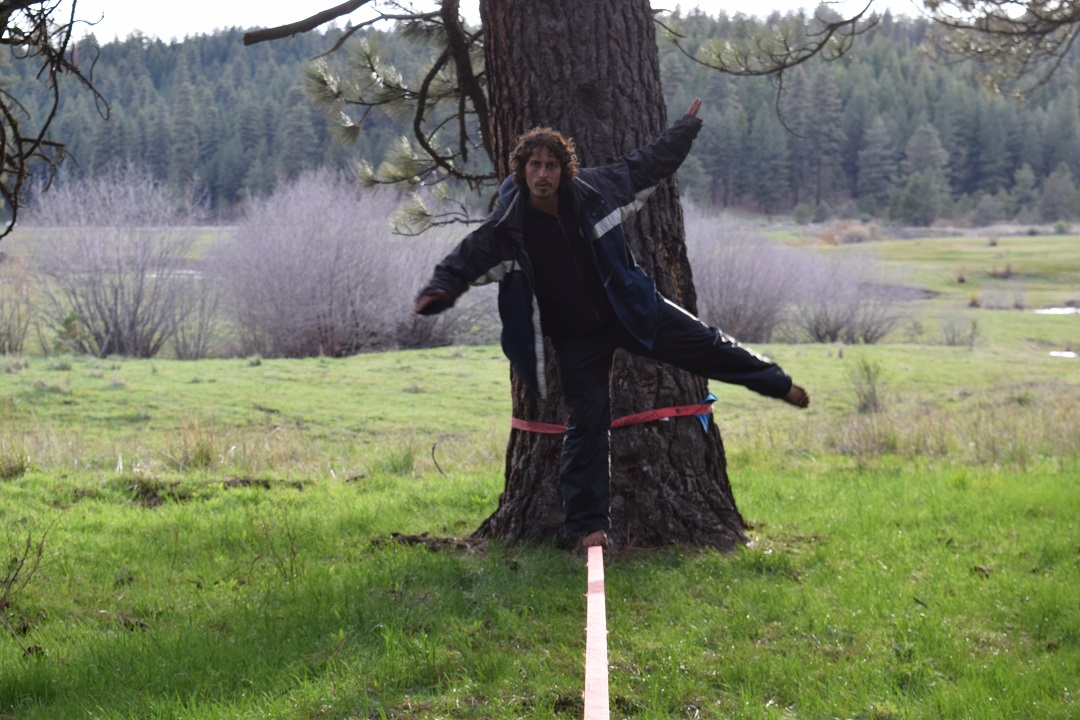 We spent two nights at this spot. Didn’t do too much today except a little hiking and we went to the famous Deschutes brewery where Wade was kind enough to pay for our meal!

Finally our time of driving would begin. Our trip with the four of us together was coming to an end. I would need to shoot north to Alaska to begin work in just a few days. We left Bend in the rain.

We passed over the snow covered Cascade mountains and came down to Portland where it was raining much harder. We got caught in horrible traffic for an hour, and after many hours of driving, made it to Washington’s Olympic Peninsula.

Our mutual friend Ethan who we worked with in Glacier last year was living on a farm there, and we spent the night with him and his girlfriend. He had a fantastic farm to live at, with lots of dogs and cats, pigs, chickens, and sheep. It was heaven for Meredith to be around so many animals!

We went to the coast and drove Ethan’s truck all over the beach. His dog Mom got out and chased the truck at full speed, I swear that dog can run 30 miles per hour and it was amazing. We had a fire and watched the sunset there.

The next day it was time to part ways. We all ate Mexican food together. It was such a sad goodbye, this road trip had been one of the best times of our lives.

We all hugged in the parking lot and then drove. Ben would be traveling by train to work another summer in Glacier. Meredith was going to Denali, Alaska, but wouldn’t be leaving the Seattle area for a few days. Safe travels Meredith!!! She will have to drive across Canada by herself, but I have complete confidence in her.

Mike came with me, and we would be going directly to Skagway, Alaska, where we were planning to live in the wilderness. He didn’t have any job lined up, but also was running out of money. I knew things would work out, but wasn’t sure how yet. Only time would tell as this adventure played out. I was really happy he was coming with me though.

By nightfall Mike and I were crossing the Skagit Valley and looking at the massive North Cascade Mountains. Darkness brought us to Canada and we camped at a rest stop. Next we would drive through the grand province of British Colombia, and off into the unknown wild lands of the Great North. 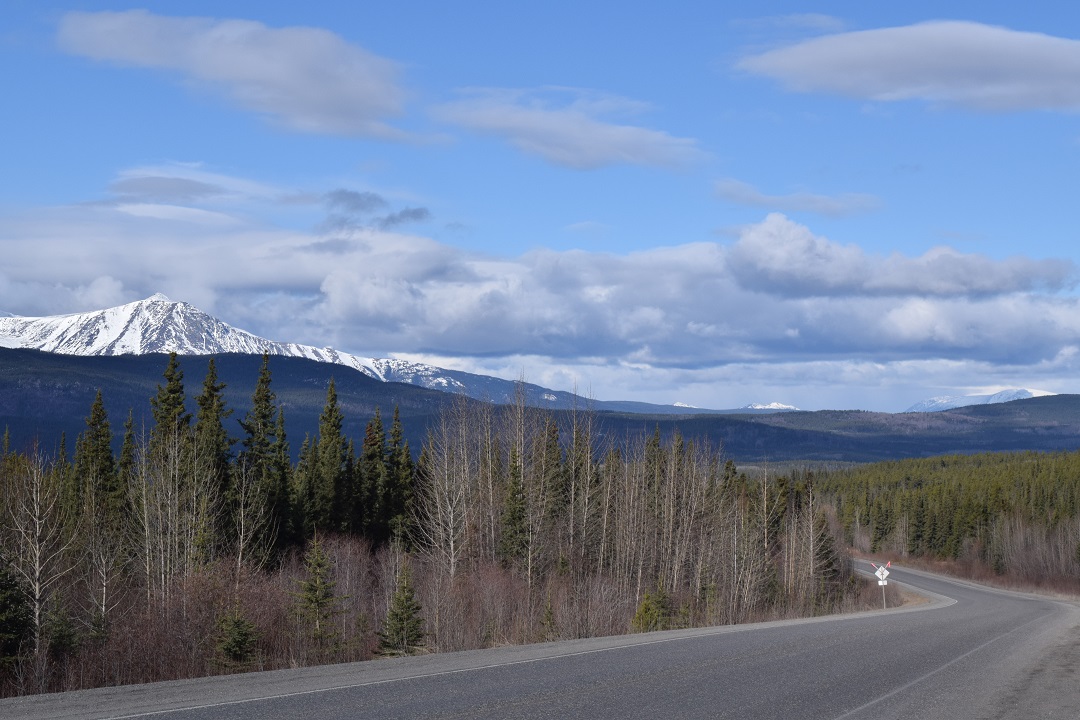