I only got three hours of sleep on the floor of the airport in Trinidad and awoke to the sight of large tropical mountains out the airport windows. I was surprised and in awe to see them as they swirled with supersaturated, misty clouds in the early morning light. Where am I? I boarded the small Caribbean airlines flight to Grenada. 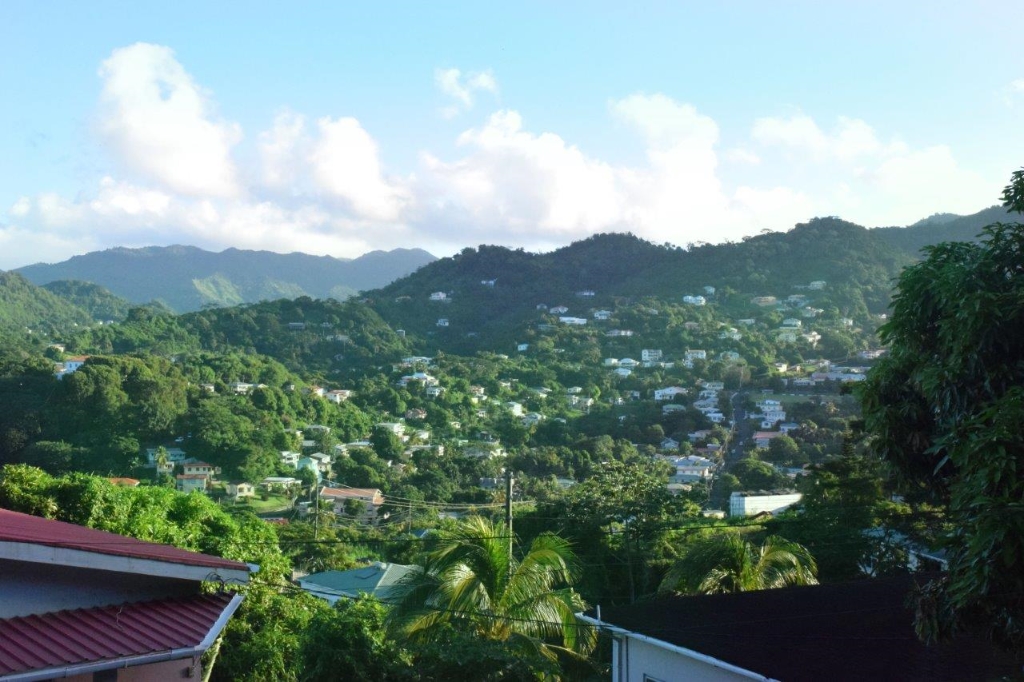 The flight was short and beautiful, the water I could tell was a brilliant shade of blue. The plane came in among the Grenadian mountains and I stepped off into the tropical heat. The first thing to strike me when I got off the plane were the colors. There were deep green bushes in the intense tropical sun with pink, red and yellow flowers adorning a cliff face. The taxi drivers wanted to get me in a 20US$ taxi ride, but I was going to try to take the much cheaper bus. I read online, you don’t take the bus in Grenada, the bus takes you. Just walk around, there are no bus stops, and it will pick you up. Okay… let’s try. 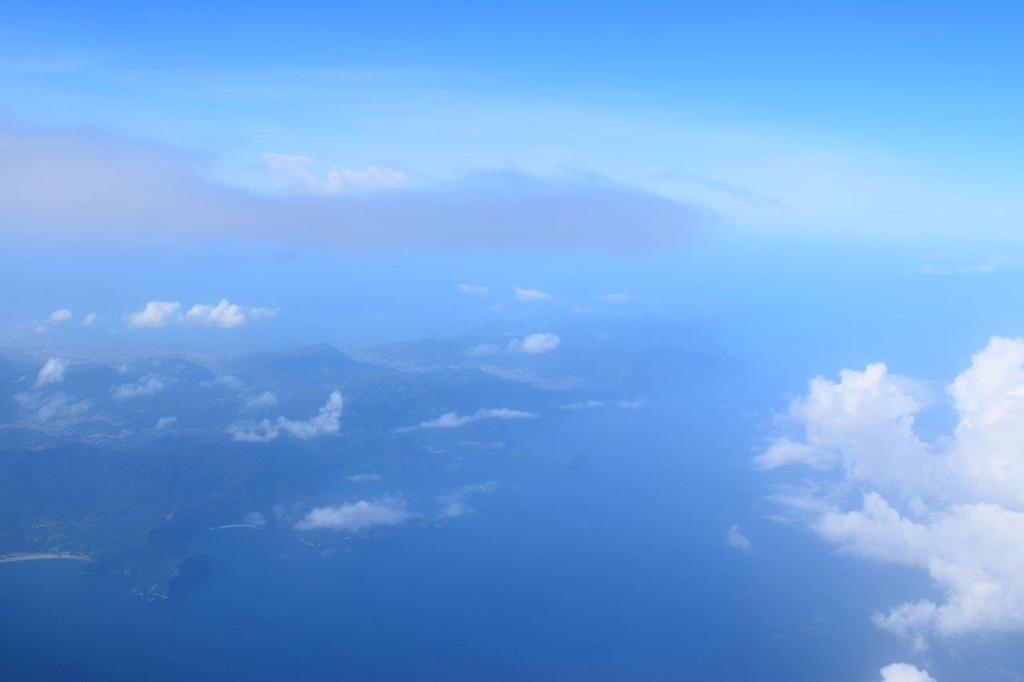 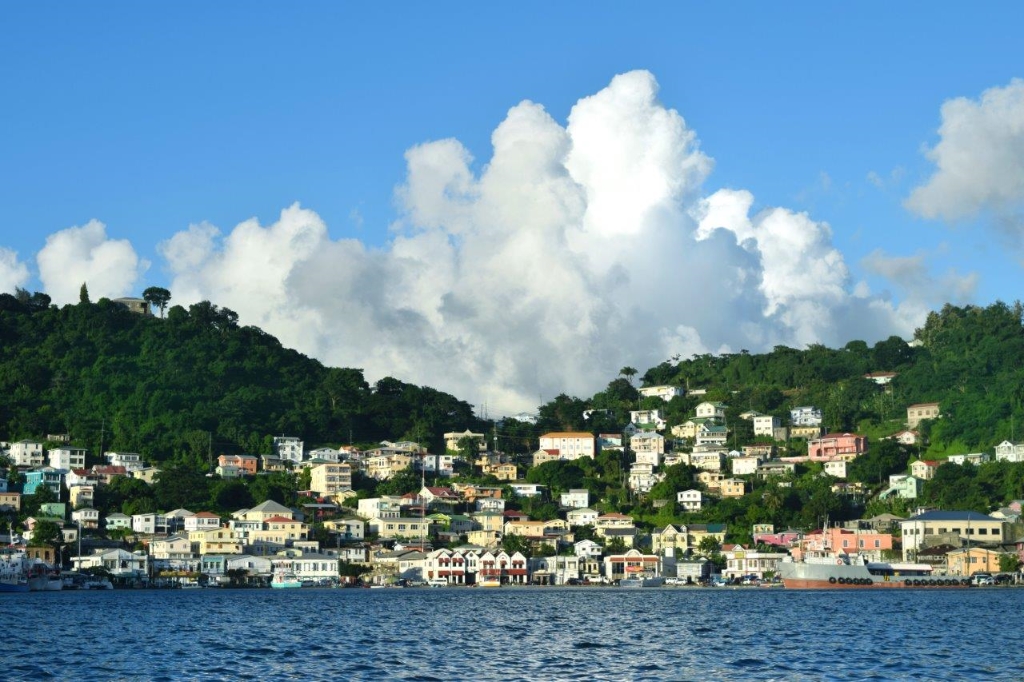 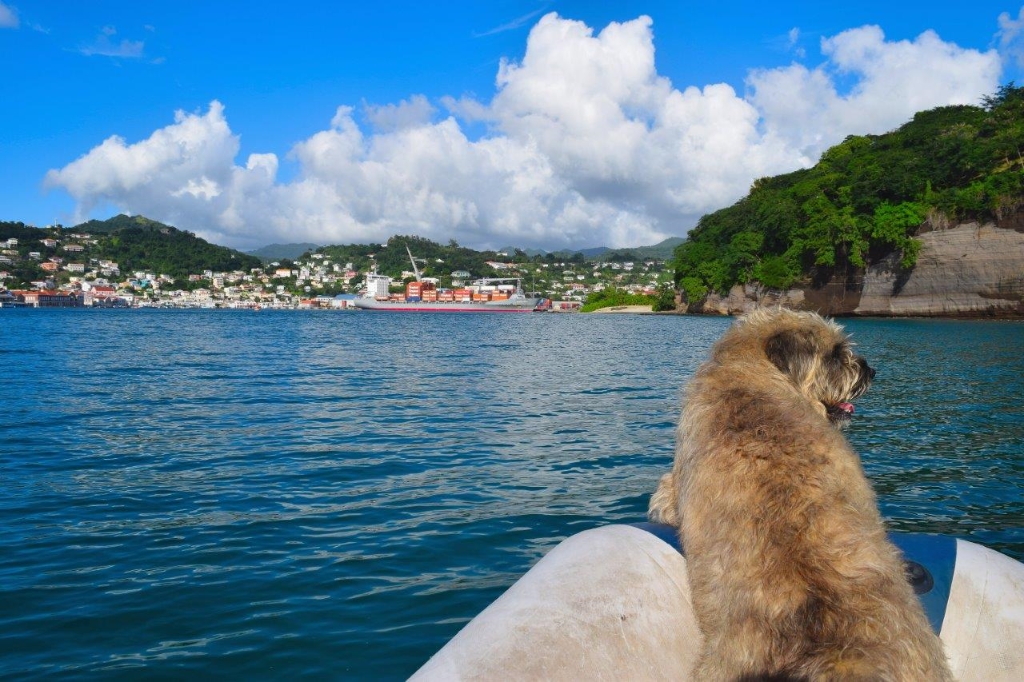 I walked out the airport and the van type bus comes immediately flying around the corner, beeping madly, opens the door, whistles at me, and beckons me in. Only 2.50EC$ for the bus, so like 1US$. I was fascinated looking out to windows to green and rainbow paradise when a woman named Karen got on. She was a Grenadian woman but had lived in America most of her life. She had a large mouth with bright purple lipstick, blonde hair, and large eyes alight with passion and locked with mine as we began an enthralling conversation. Meanwhile, the bus was roaring up and down the unearthly beautiful, narrow, winding streets of Grenada at about 50mph. Driving on the left, with all shades of bright color passing through the windows in my peripheral vision while I conversed with Karen.

I stepped off the taxi in St. George at “The Yacht Club” to be greeted by Captain Silvia with hugs. I met the group and could tell right away they are awesome people, and we were friends immediately. Cairan from Australia, Robin from Vermont, Petra from Sweden, Alex also from Sweden and Silvia from Spain. Robin is the oldest of the five of us at 26, Captain Silvia is only 25 and I can tell this is an extremely fun group. We were born respectively in the years 93, 92, 91, 90 and 89. I should mention since the names appear to all be androgynous, Silvia and Petra are woman and the rest of the crew are men. We walked up the steep mountainside streets of St. George to the market for shopping and I found I was so busy socializing with these people my age and so full of life I was having a hard time taking in the beauty of Grenada in the background. 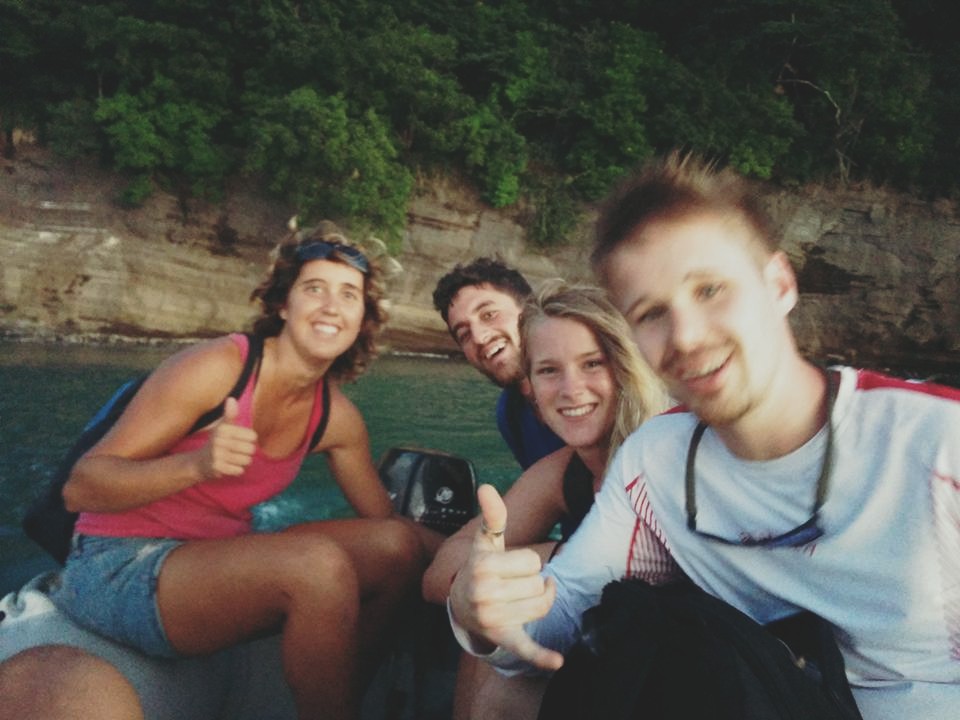 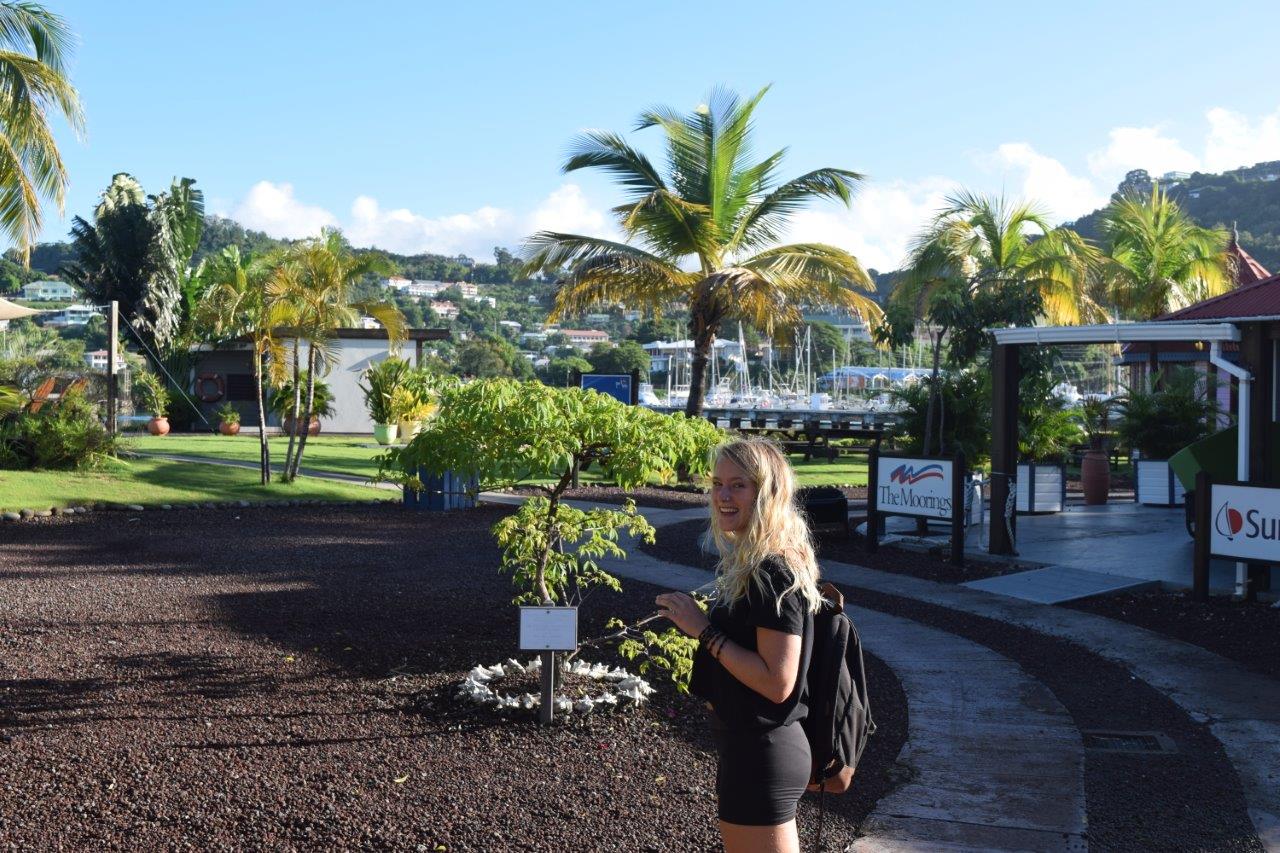 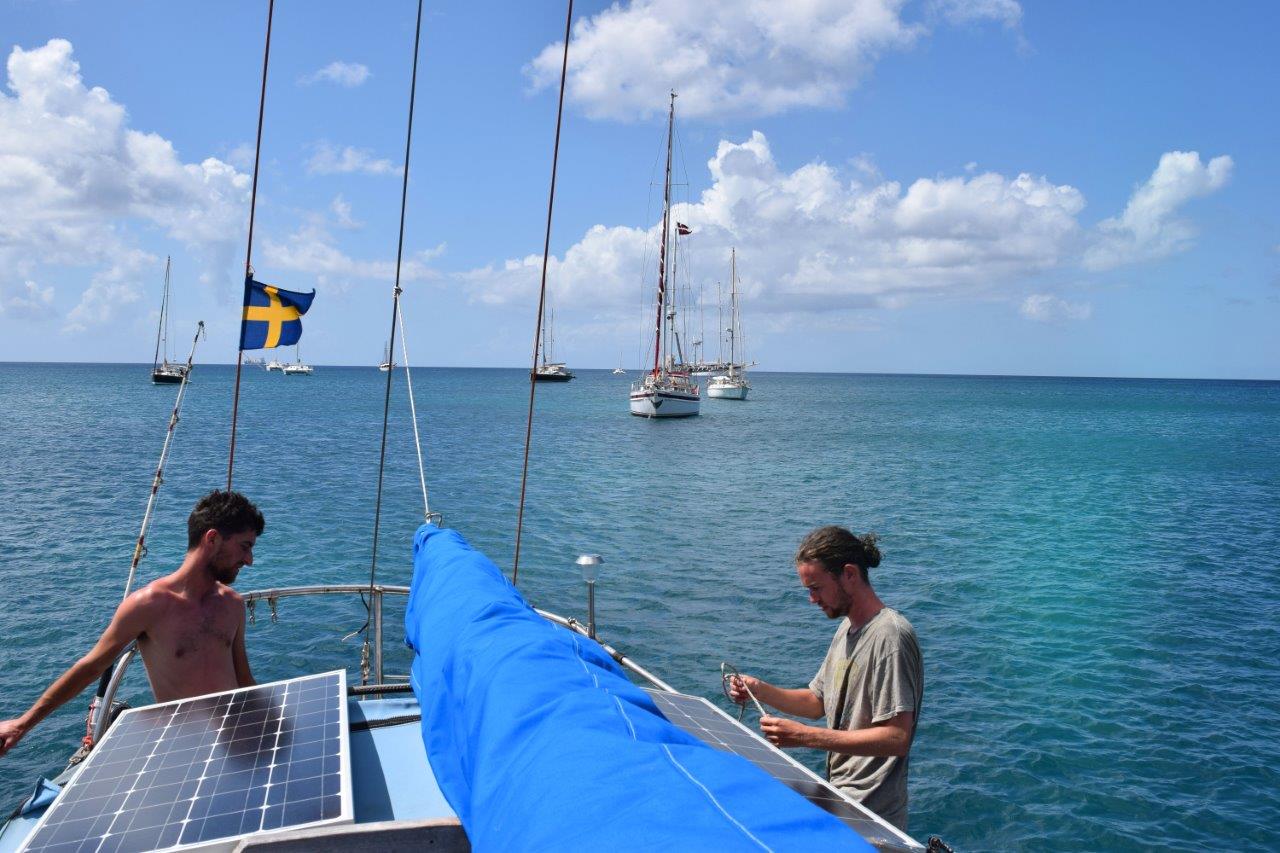 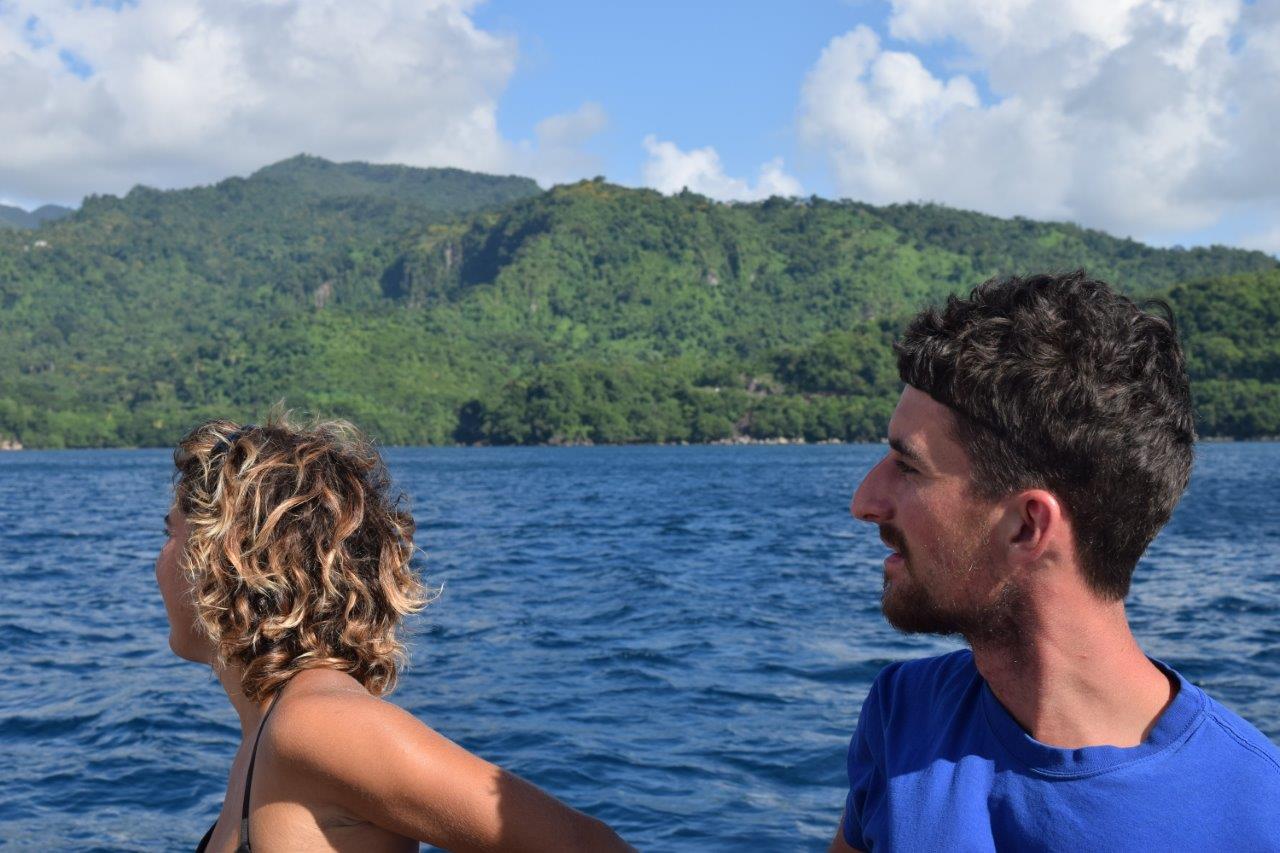 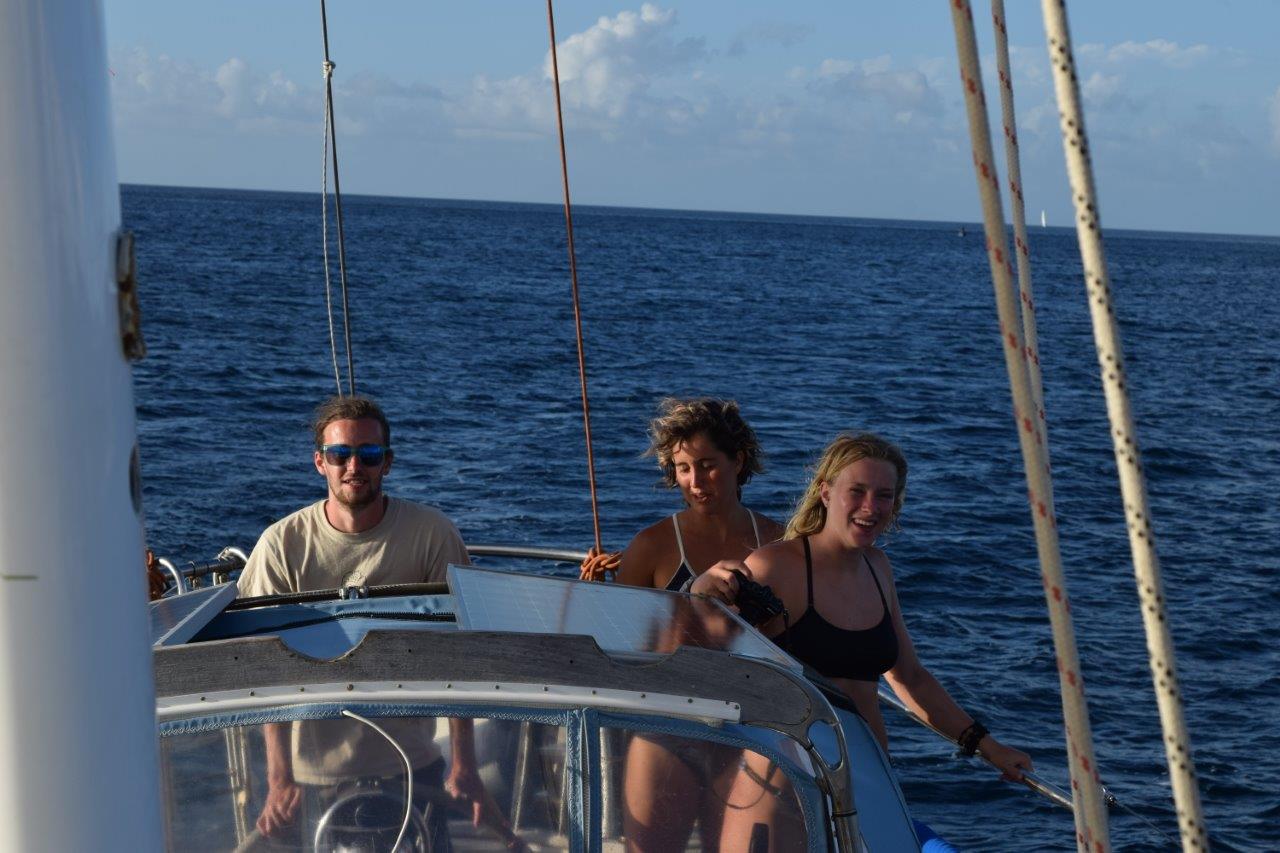 They took me back to the ship Shalom where I met Claes. Much older and also Swedish, he runs this ordeal. There are three boats in this fleet flying Swedish flags and he owns them all, but has made Silvia the captain of Shalom who has sailed trans-Atlantic with him. He seems like a real genuine guy, a bit crazy. 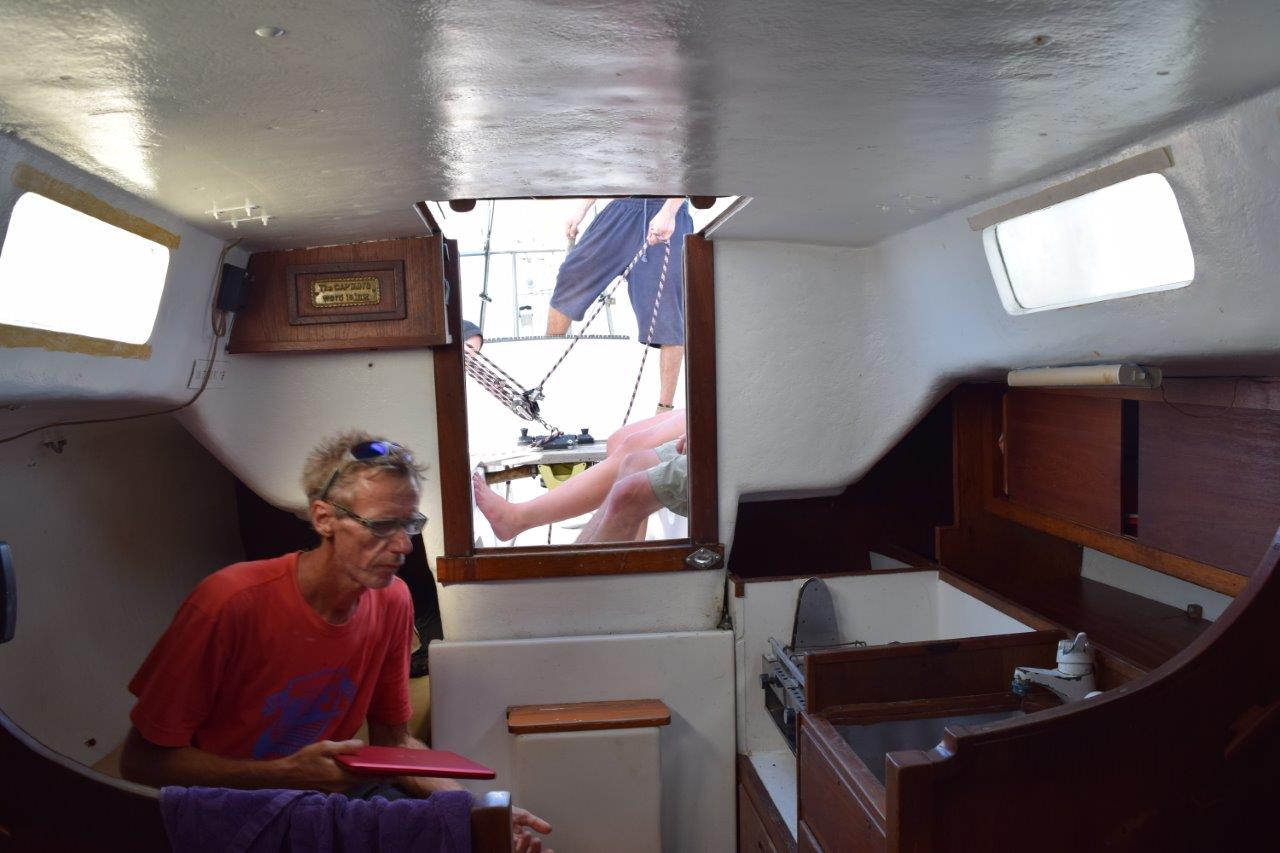 Unfortunately there was a serious problem the second I stepped foot on Shalom. Claes dinghyed over to us and brought the bad news when I first met him. The three boats in this fleet are Joshua (42 feet), Shalom (40 feet) and Goma Rota (32 feet). Joshua was having problems with the rudder.

Silvia, Petra and I went to go help Claes and Alex with the problem on Joshua. I went right in to helping them with a giant wrench and a pipe for leverage trying to manually turn the rudder but it was stuck. Alex worked the wheel while we were down there pulling and pushing. I went right into the thick of this problem with them and it was as if we were family and had known each other for years even though we had just met. Hours passed while doing this and it was completely impossible. We broke the huge wrench in half with an earsplitting crack. The only option is to pull the boat and get professional help but we’ve made the problem worse by moving the rudder so the boat will no longer travel straight!

We went down free diving and cleaned Joshua with scrapers and brushes. We dried off on deck and I jumped in the crystal clear and perfectly warm water a few more times as we re-anchored Joshua tediously, with me diving down to check the anchor. Then the powerful, tropical heat was interrupted by a massive black rain squall which engulfed the jagged and emerald green mountains. Everyone stopped what they were doing and just stood around enjoying it, all getting a free shower. White mist obscured the colorful village/ city of St. George which rests in the mountainsides around the bay. 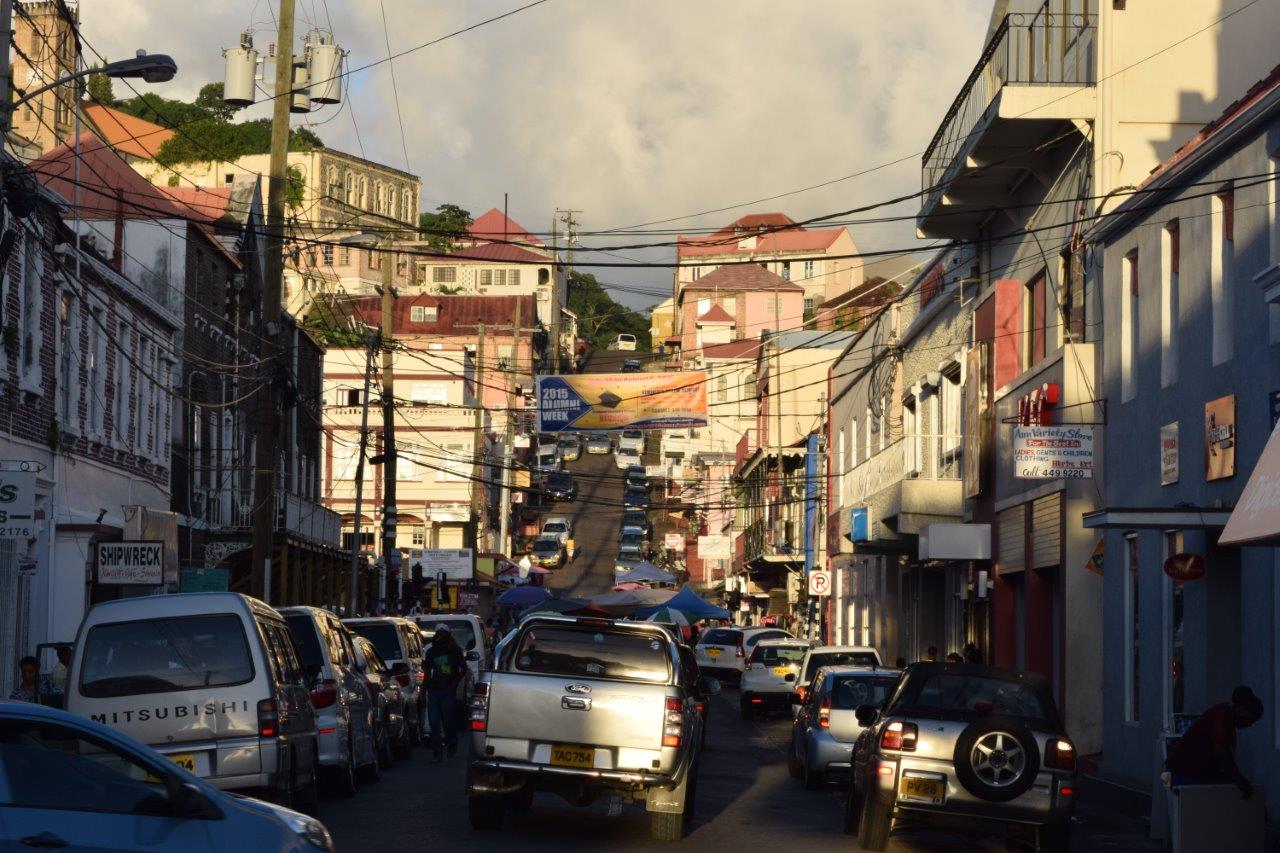 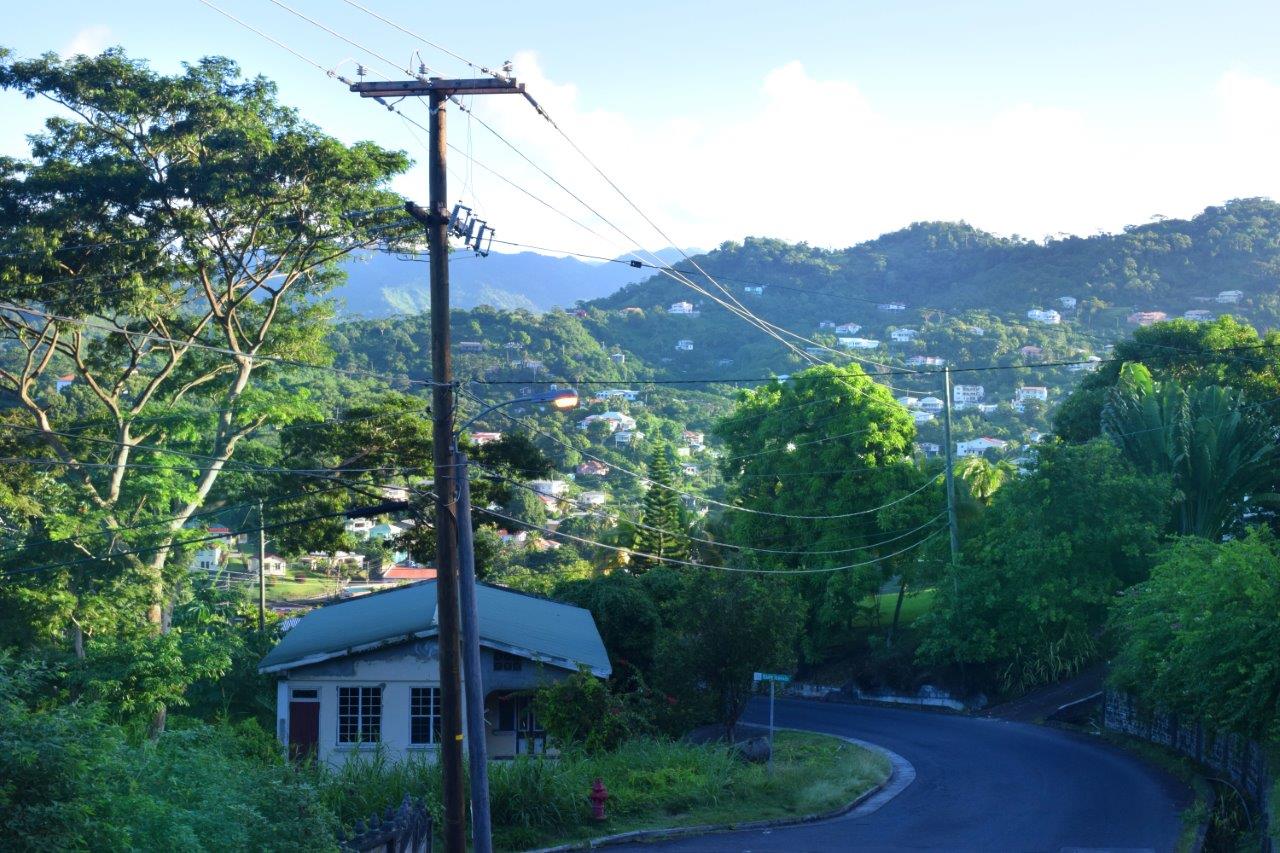 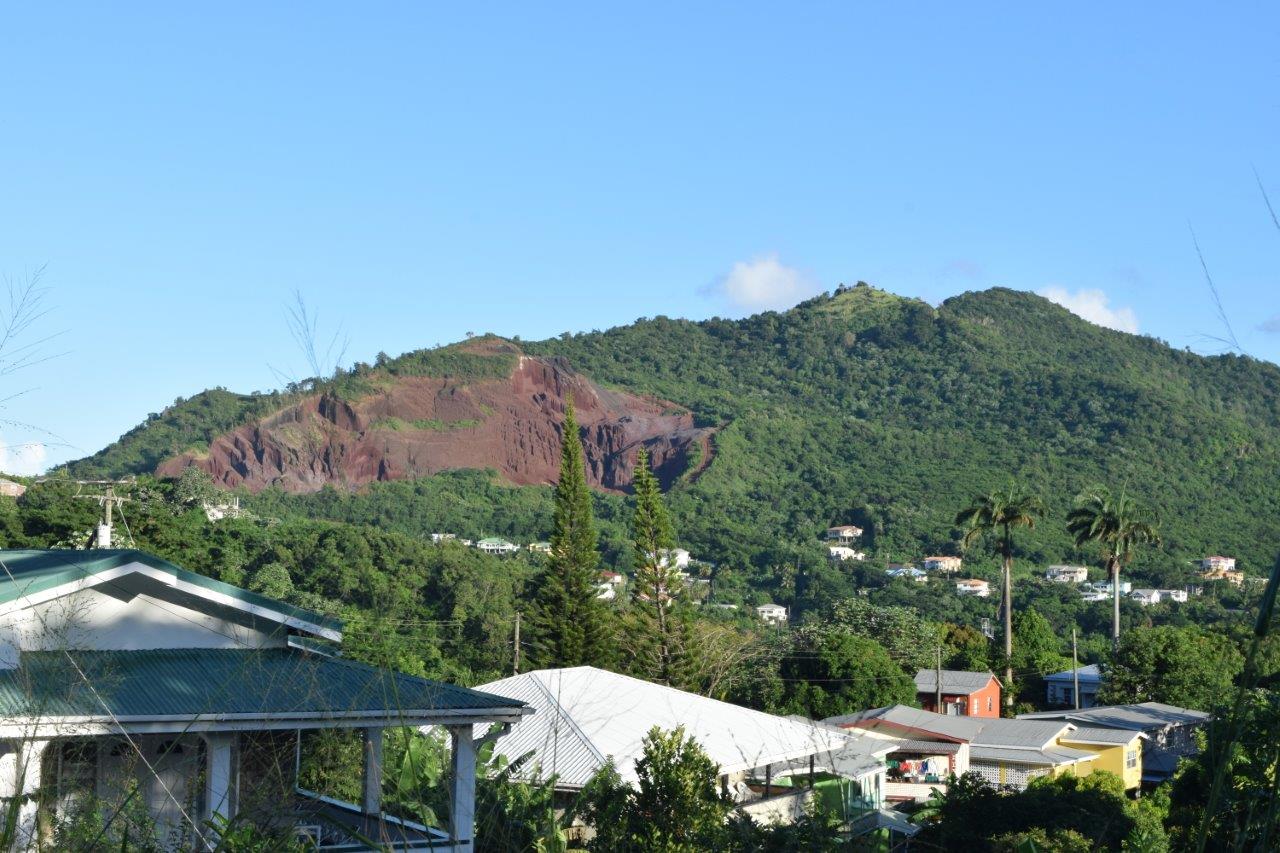 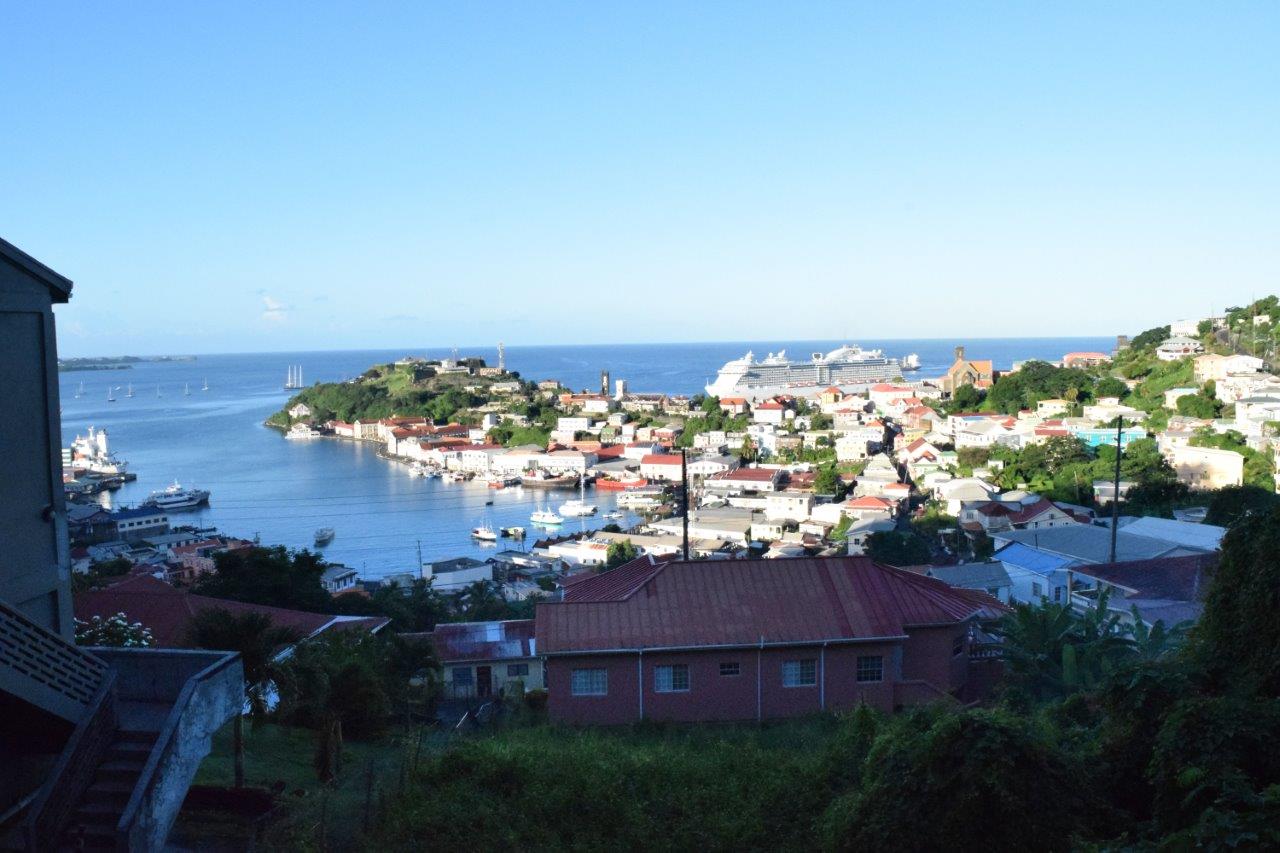 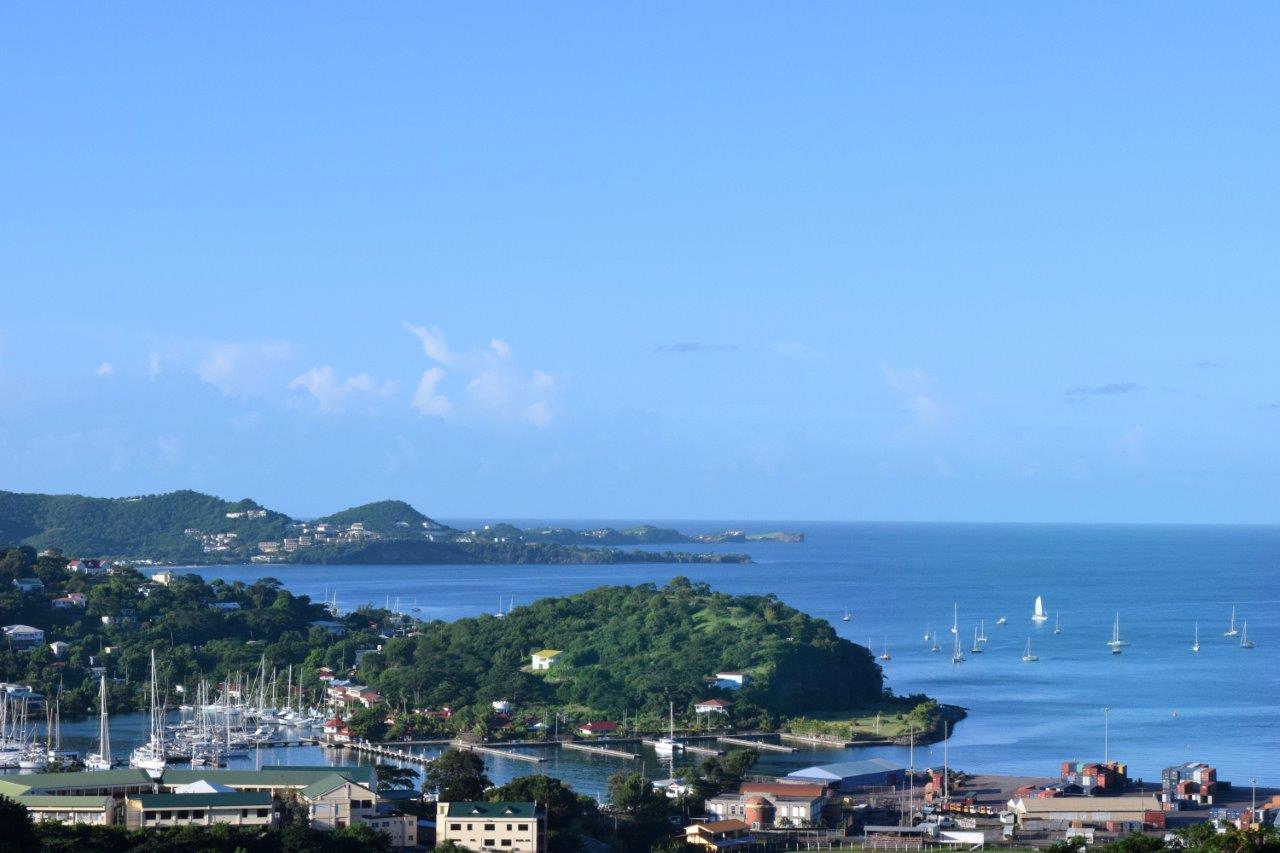 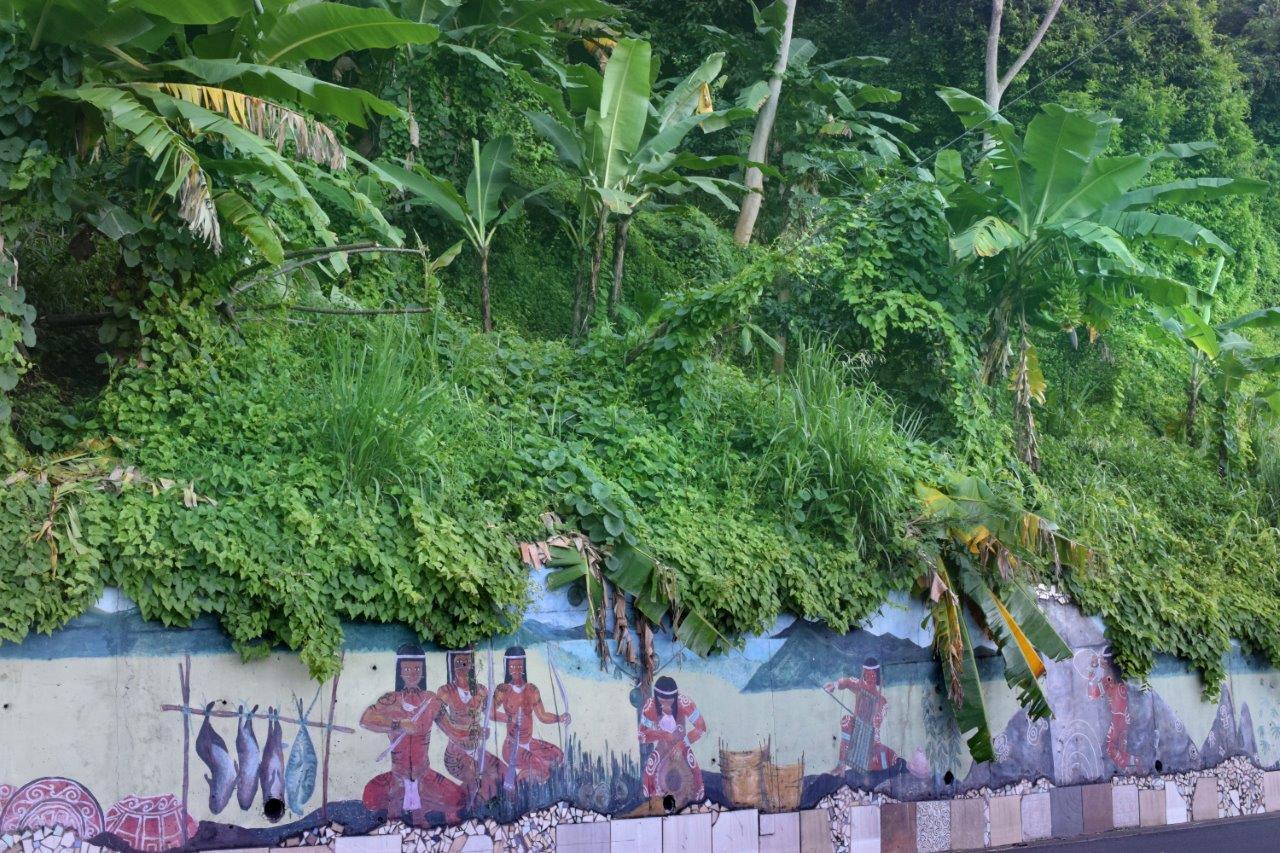 I got curry in St. George with Alex and Claes after the rain stopped, and don’t forget the awesome dog Chewy! Claes told me it’s the worst problem he’s ever seen boating. For me, I am just walking into this problem. I basically traded one guy’s boat drama for a different one. It sucks, but all the same, Grenada definitely does not suck and this crew is really cool. I immediately like everything about this scenario except for the fact we are stuck immobile. Stuck in paradise. I should mention that we are all paying rent for our expenses to be here (kind of a lot), so we’re going to try to be making money however we can, whether it’s selling boat charters, cleaning boats, writing, running yoga classes, selling paintings/ coconut jelly, whatever we can do! Silvia cooked a fantastic dinner of rice and battered fried eggplant and we went to sleep, sleeping five people on the forty foot boat.

We tried to go day sailing today in Goma Rota, the smallest boat in the fleet, but it has a problem with the engine… It’s just a small problem though and will hopefully be fixed easily. There is a bit of unrest that we are paying to be here but are unable to sail. Instead we swam to the beach, the far beach, just Silvia and I. They told me she is one of the top athletes in Spain and runs triathlons but I guess I had to see it to believe it. She took off through the water, and even swimming as fast as I could, I still fell far behind. I was actually really amazed by her ability. It was a far swim, and before too long the others pulled up alongside me in the dinghy. They offered me a ride, but instead just threw me a line and dragged me behind the dinghy. At some point Claes jumped in and joined me in being pulled, we (eventually) caught up with Silvia, and the two of us swam with her for a minute before Claes got back up in the dinghy. Claes is also a world class swimmer and even though he’s old he can go much faster than me. I fell behind again, got one more short dingy tow, and eventually made it to the beach not too far behind Silvia. She immediately took off running when hitting the beach, which amazed me too because I was way too thirsty to do that! Got a sip of water and chased after her…

Silvia kept going and swam back to the boat but I stayed onshore with the crew and we met some Grenadians. We went to the beach bar with them, but one guy took Petra and I back and showed us his house. Jungle on the beach with many houses all built into the Grenadian mud. This island is wetter than the Virgin Islands where I’ve been, here we are near the Amazon and there are real rainforests. The house was just a plywood shack, and the guy named ‘Chaos’ said: “I built this house in t’ree days!” Bananas and breadfruit grow around, him and his brother ‘Sex Machine’ showed us their pet duck and crab. They tried very persistently to sell us weed or cocaine, or the house rental, or party tickets, or beer, or a tour of the island, or a taxi ride, but fortunately we had absolutely no money or anything to offer them. 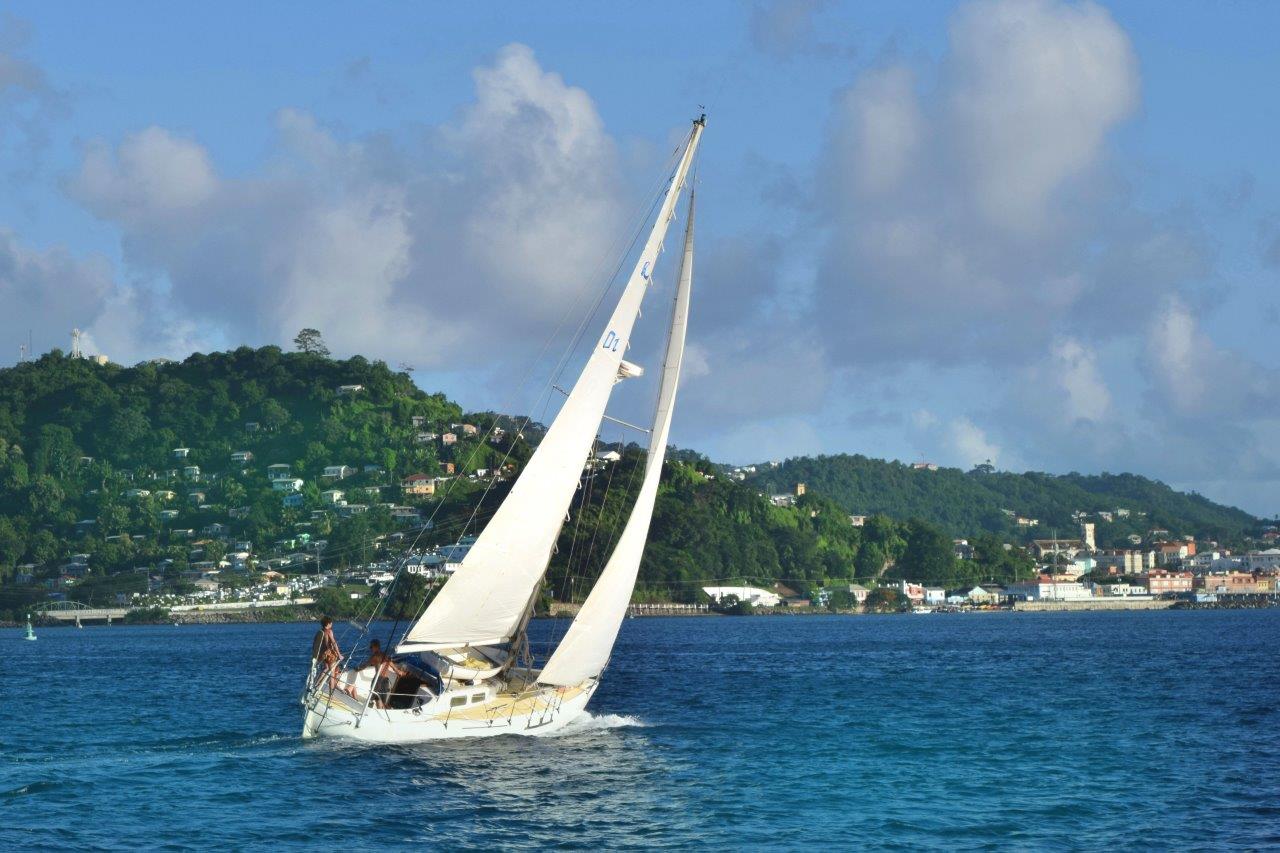 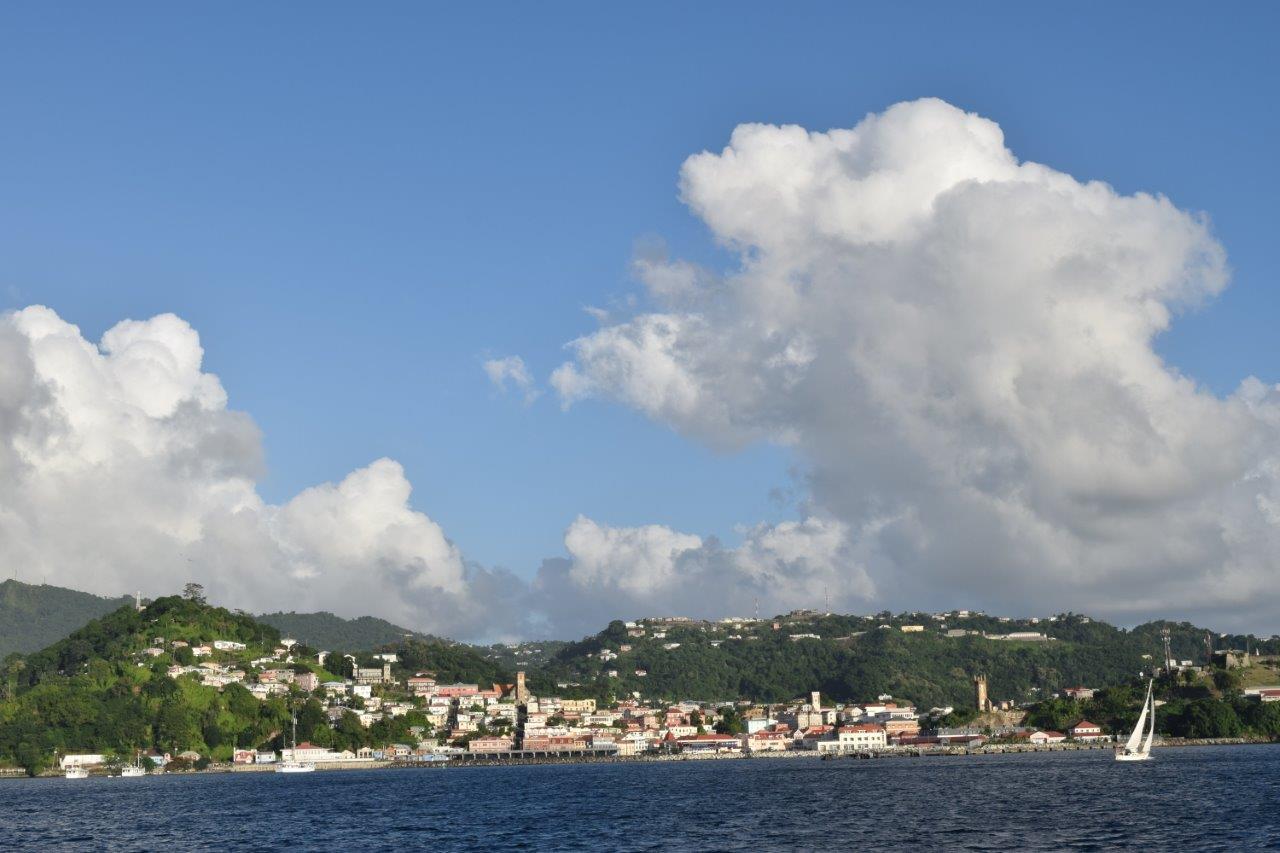 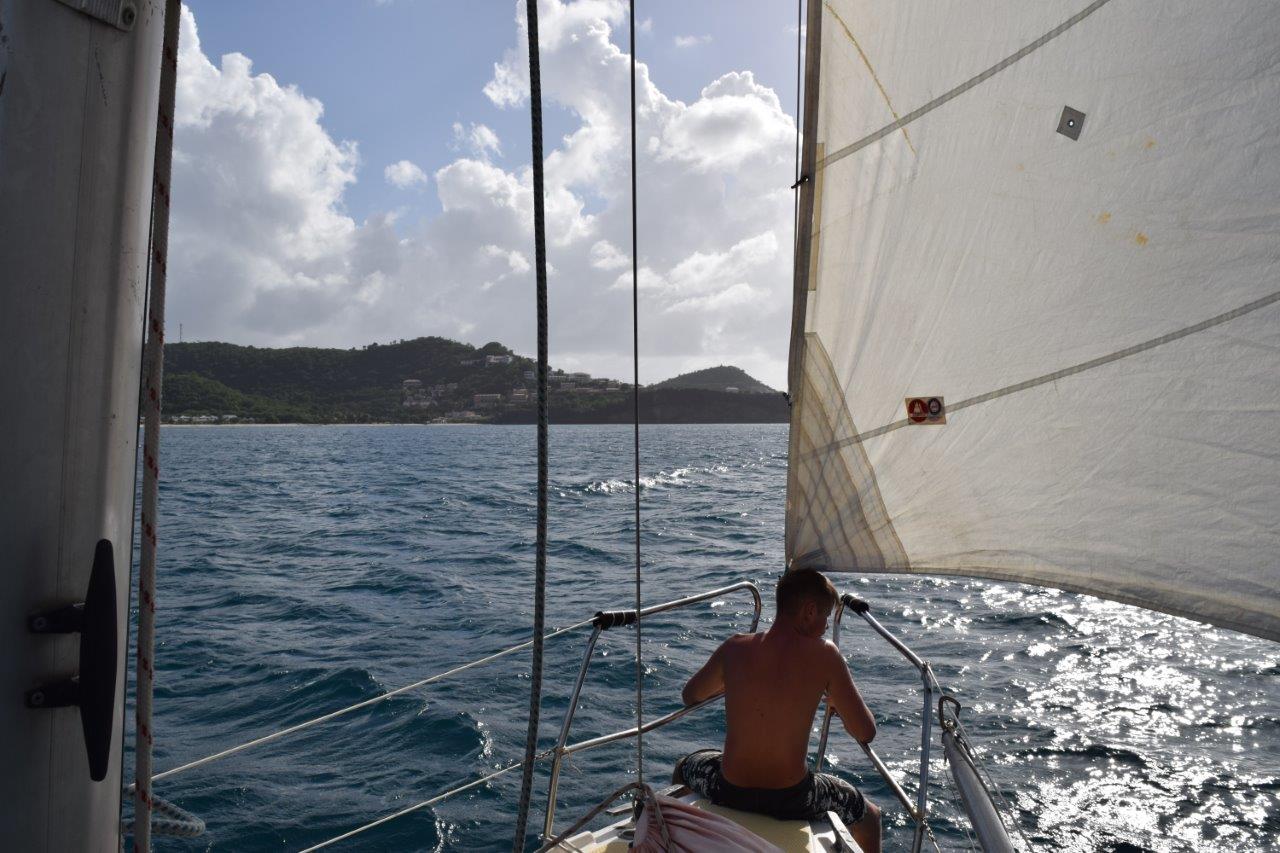 We went back to Shalom for dinner as always and I cooked cous cous with ginger, pumpkin, carrots, onion, garlic with fried plantains and lettuce. They were all very appreciative, and it is a big project to cook for seven people. We’ve got one more crew member named Francisco from Argentina on his way to join us. It’s a lot of fun to cook for the big group, always a party and we’re eating true Caribbean cuisine. This is not the USA, here we eat only what they have at the market. Silvia and Claes decided to put together a race. Then it turned to betting. First it was a weeks’ rent, then the stakes grew higher and higher to now where its either free captain for ten years or Silvia gets Shalom! That’s for tomorrow and my money’s on Silvia! We’re going to bed early, and it’s raining yet again, but what could have been a bad day due to the problems, with the right attitude has become a great day. Wondering what this adventure will bring to me, probably some things I didn’t expect. 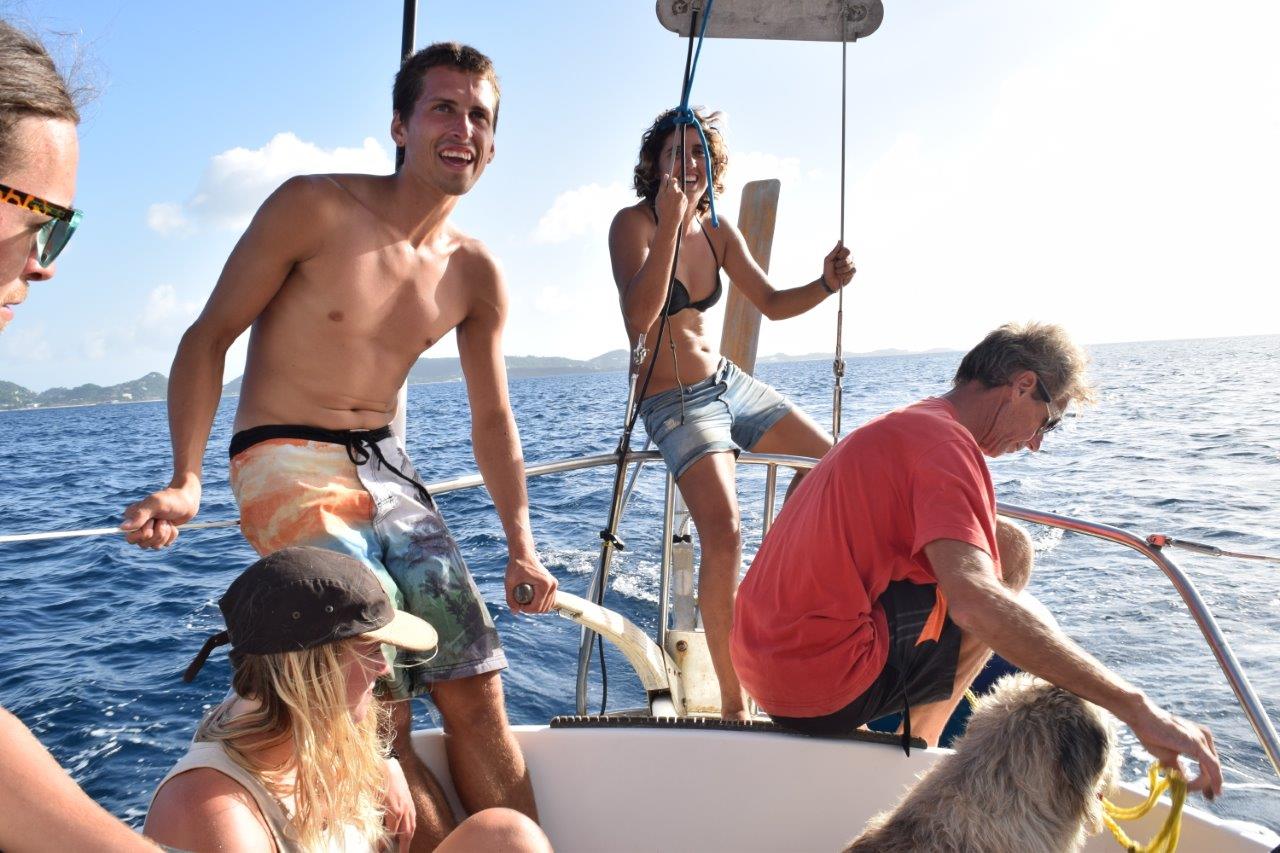 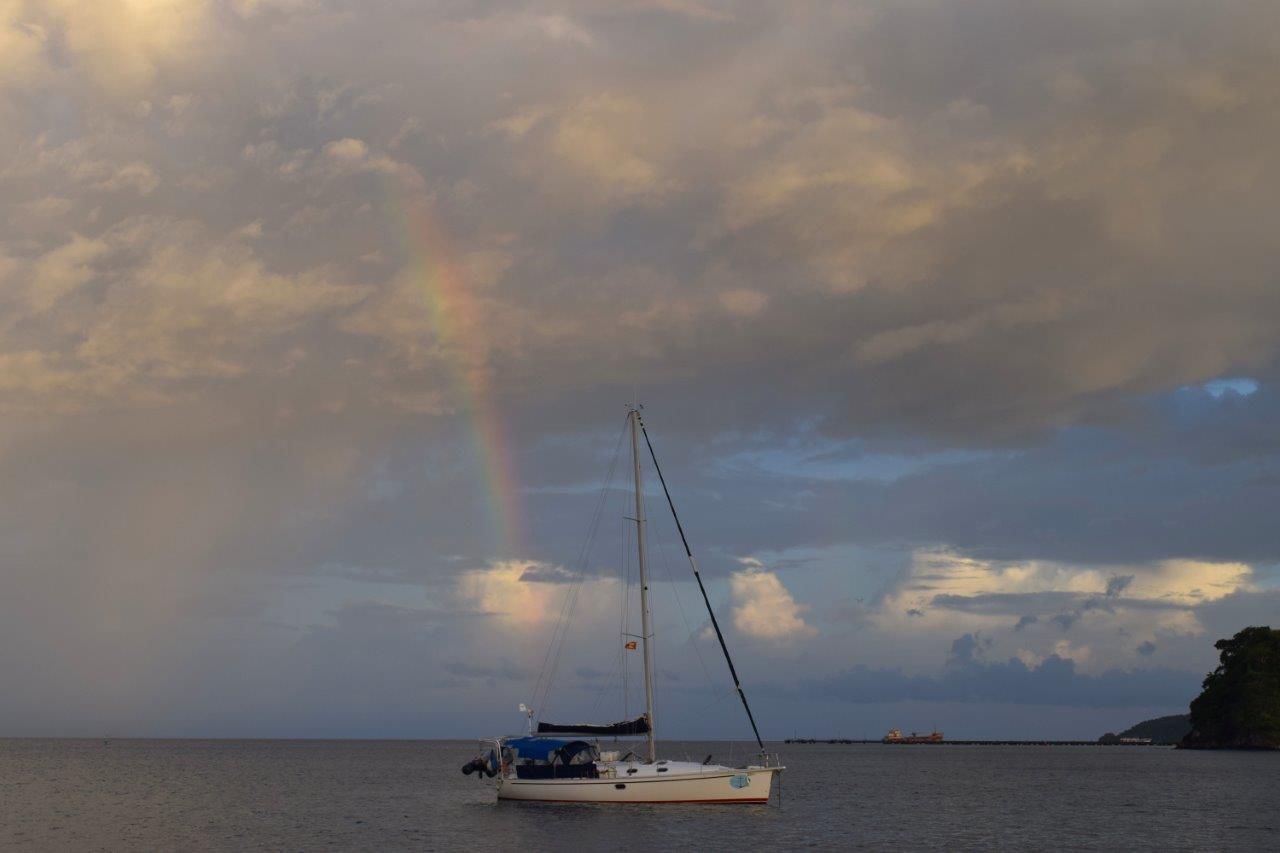