The words of wise men are heard in quiet more

Than the cry of him that ruleth among fools.

Wisdom is better than weapons of war

I write this sitting on the deck of Shalom, sailing with a strong breeze off Union Island in the Grenadines. This place is wildly beautiful, with delicate and jagged mountains soaring into the tropical clouds. We spent last night on Carriacou, a small island under Grenada’s government, and now a sea of spray and white caps separate us from it. We just checked out of customs, and with that, we say goodbye to Grenada. 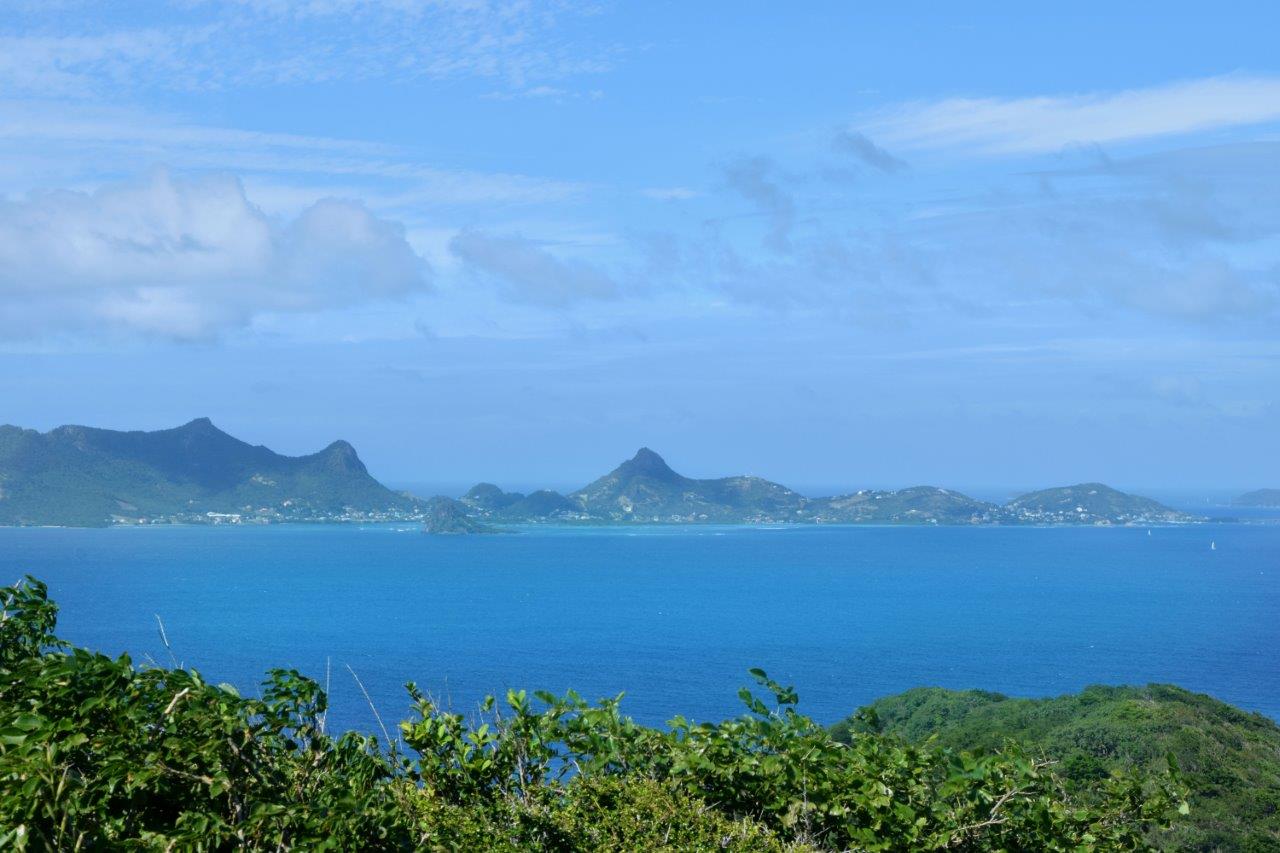 When I came by plane into Grenada, I wrote on my customs form that I’d be here two days. That was the original schedule, but now I’ve been here two weeks. The time has vanished in a distinctly Caribbean way. However, I am spending too much money, paying 210 euros a week to be part of this crew. I will soon be looking for a different boat ride. We’ve been stranded in paradise due to the problem with Joshua’s rudder and the original schedule to sail away from Grenada on November 15 has changed. Today is November 28th.

We spent the entire week in Prickly Bay working, and Claes did end up paying me for my time helping him. We didn’t like the dirty water in Prickly Bay, it was not our favorite place, but it didn’t stop us from swimming. First we had to pull Joshua up on land, the ship was hoisted precariously on the travelift. It was painstaking work after that, attacking the problem head on with the collective energy of eight young people. We removed the rudder, but the shaft was completely frozen in place. In order to remove it, the stuffing box first had to be removed and the top of the shaft which had warped slightly over time had to be filed down. Then we hit it with a sledgehammer producing earsplitting cracks and shaking the boat as it came down. We’d have to hammer it down as far as it could go, then hammer it back up from the outside. The cabin we worked in became a sauna and we were drenched in sweat, but finally, with one final attack of the hammer, the shaft fell free. 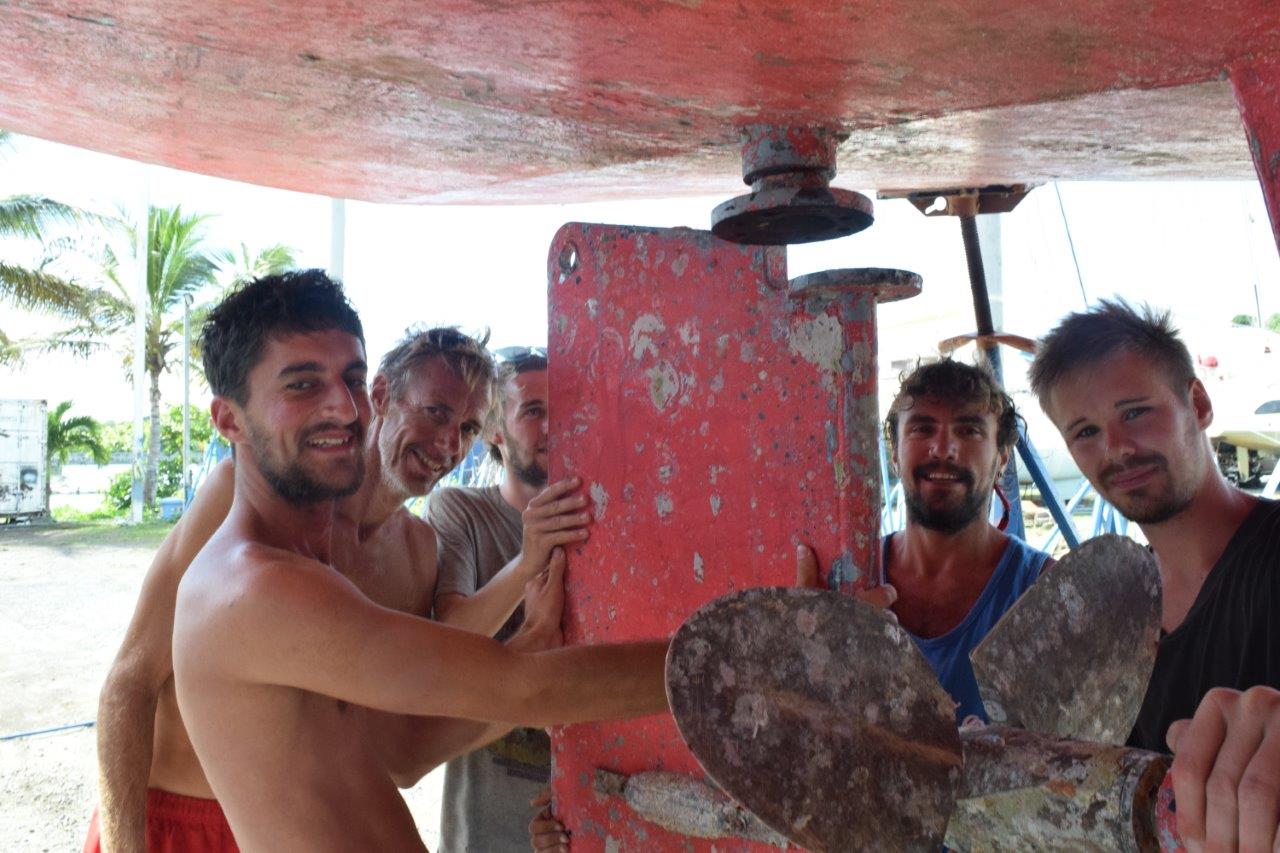 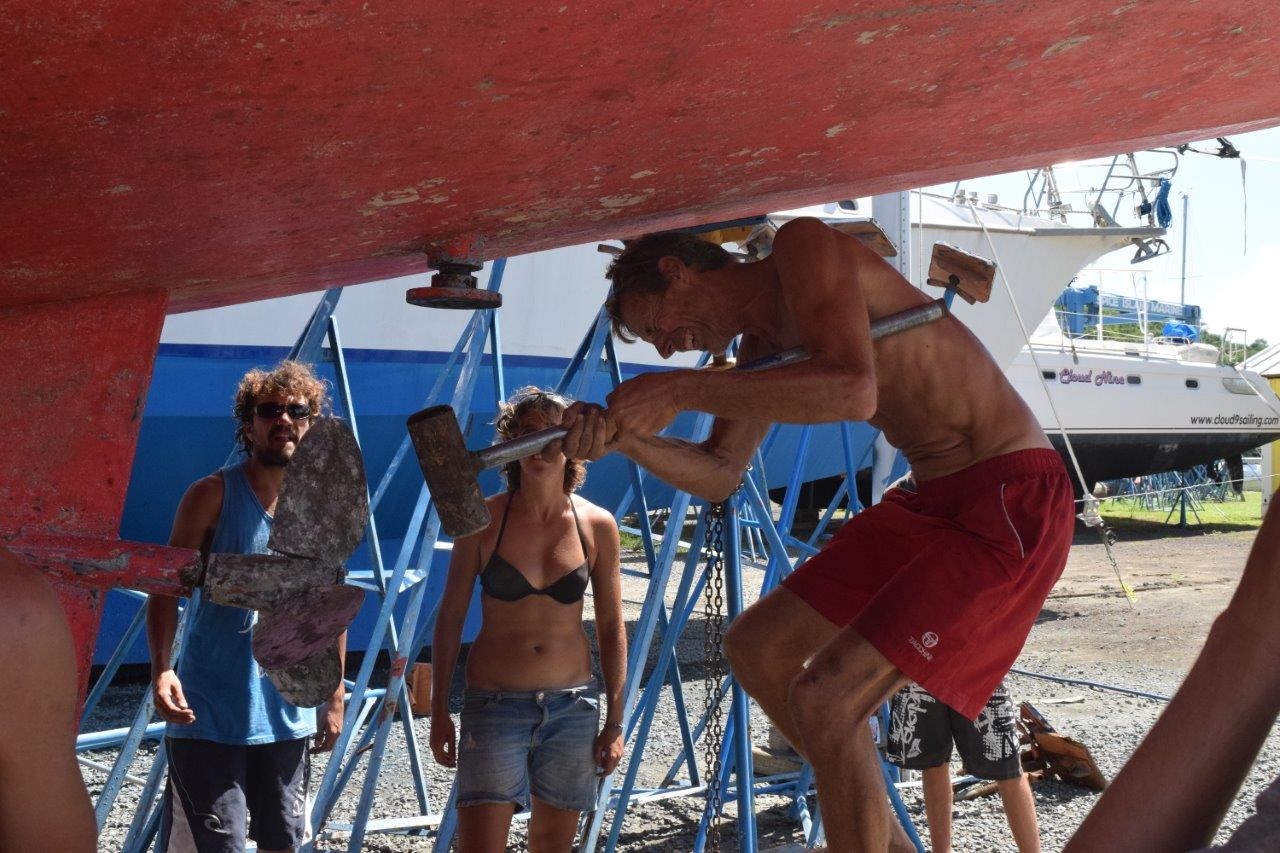 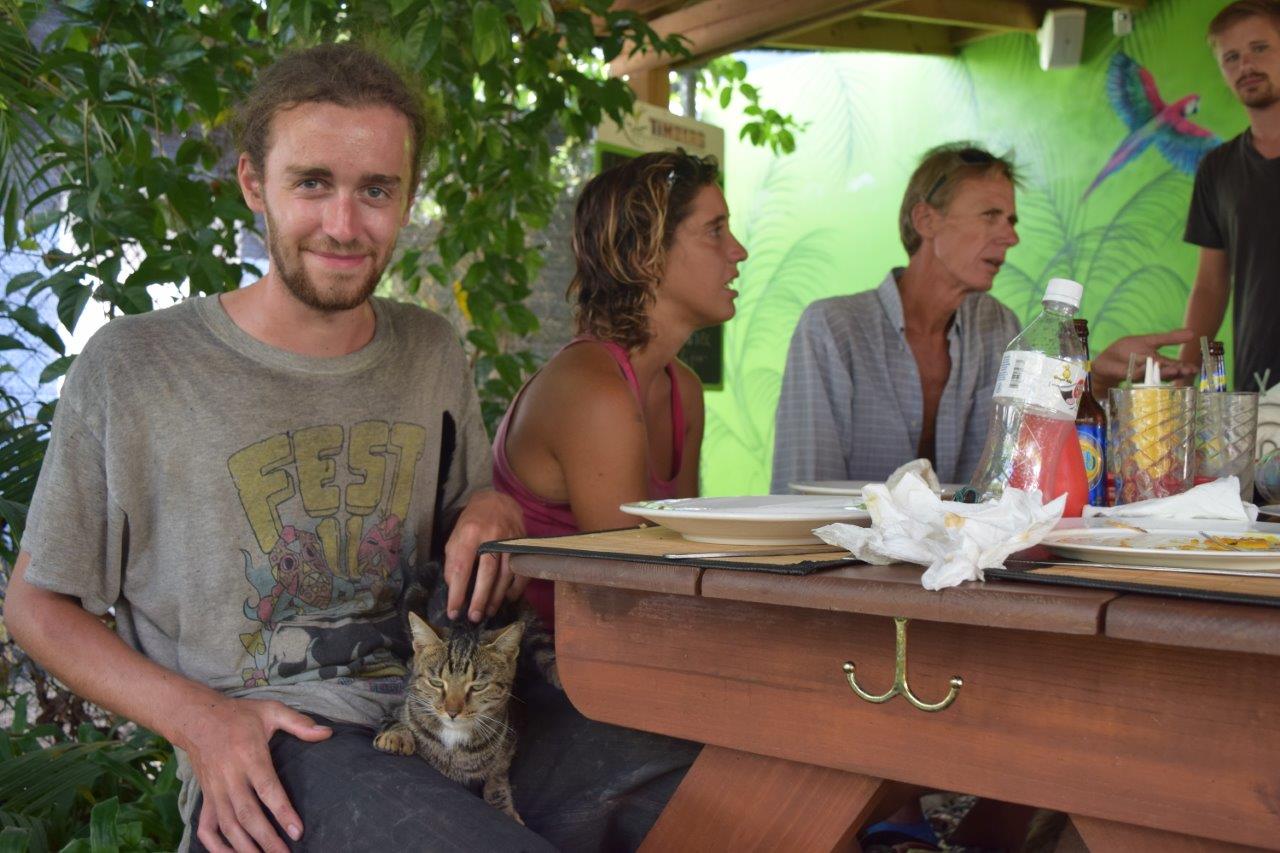 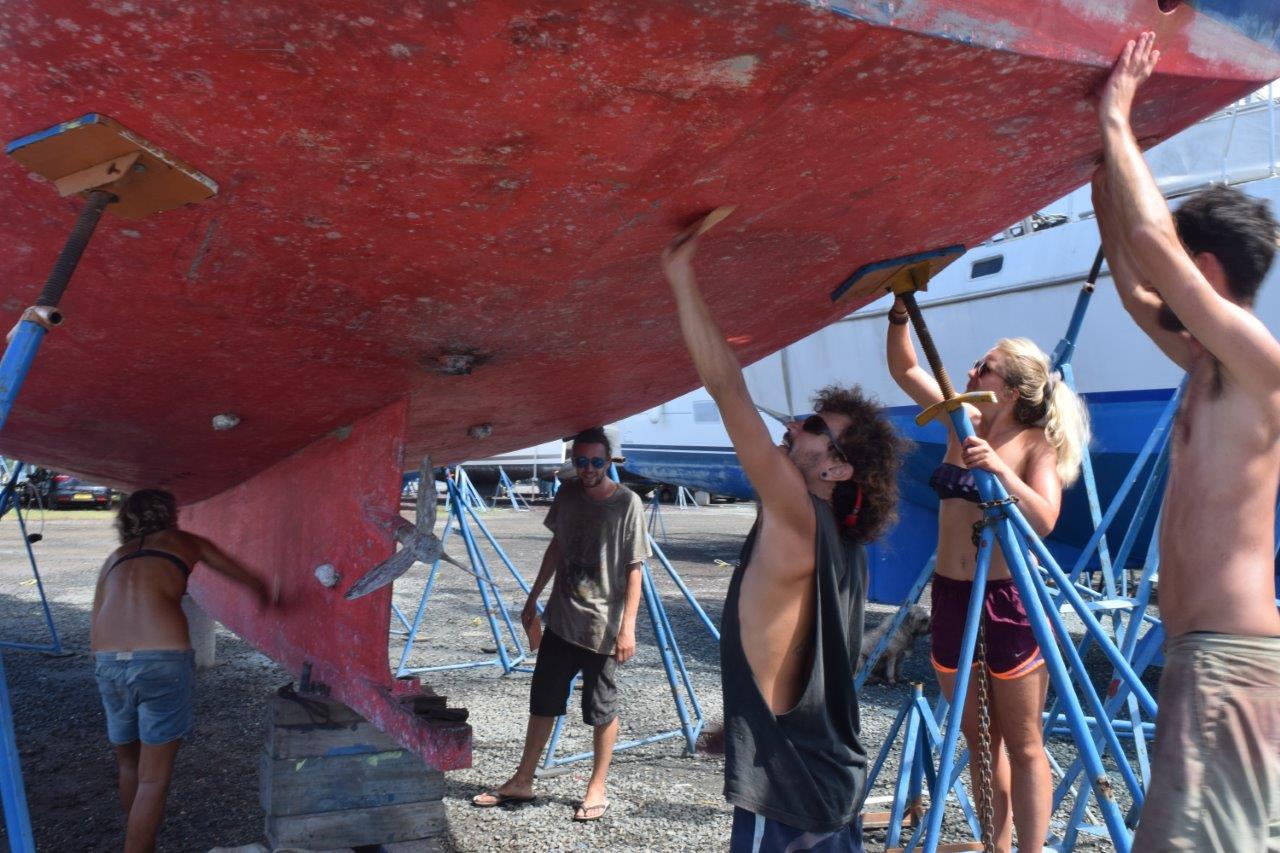 It took three days of working together, we cleaned and polished the shaft. We also polished the space where it passes through the hull. We greased the shaft and put the rudder back together. While we did this, we also painted the boat. Then we had to repack the stuffing box and reconnect the steering. We were victorious! The rudder now turns smoothly and when we steer the wheel, everything works the way it should. 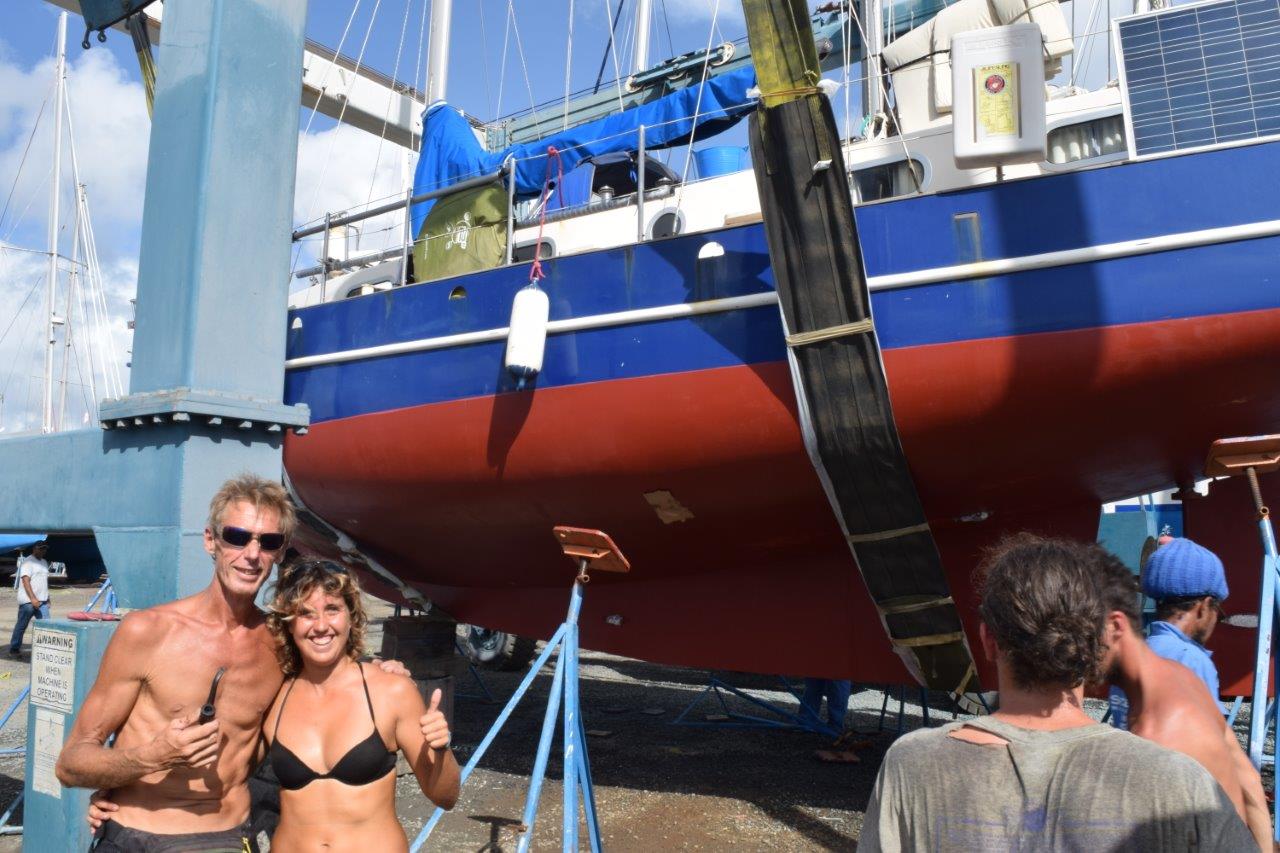 Then we put Joshua back in the water 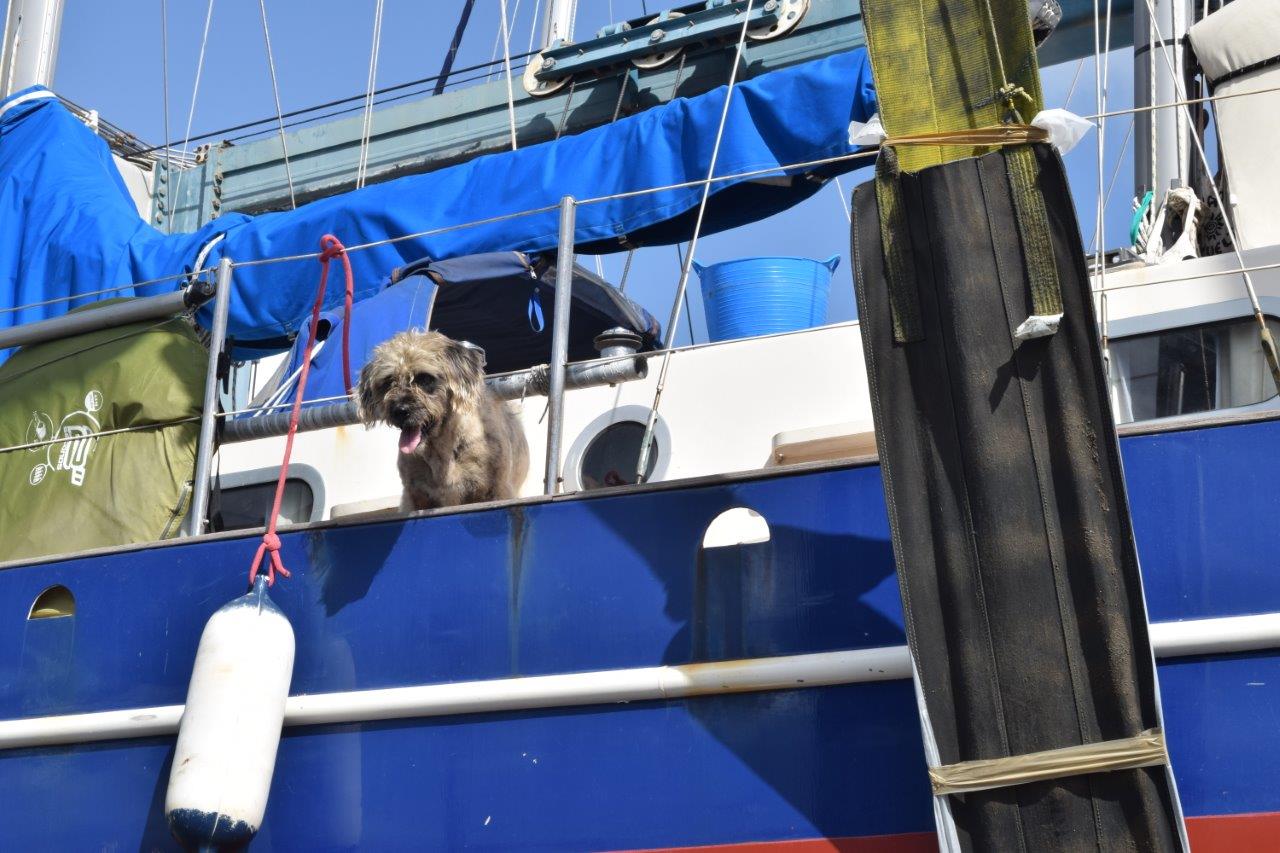 But we shouldn’t have left him up there when the boat starting moving, he jumped off from about 20 feet onto the ground! Crazy Chewy… 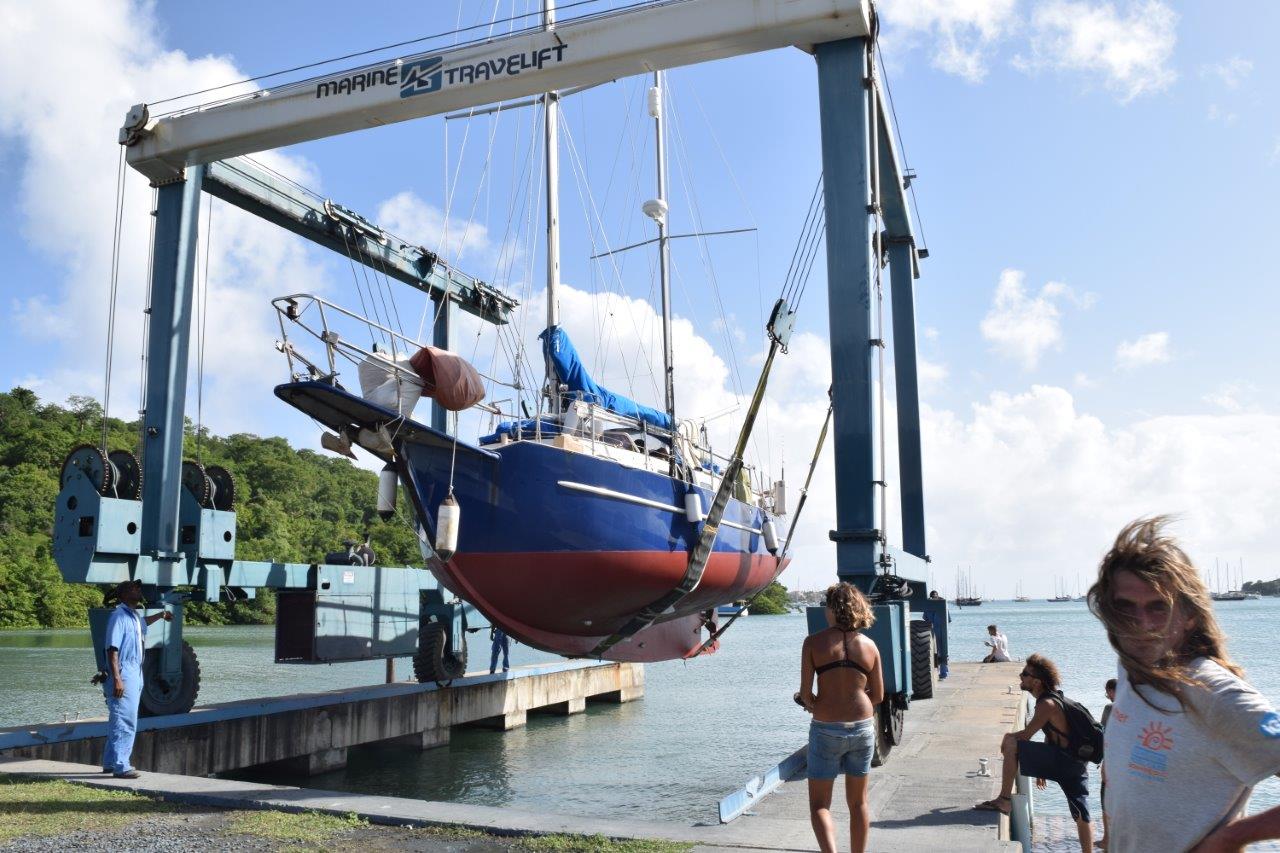 Now, the boat was fixed and the adventure would start. We put Joshua back in the water and headed around Grenada to St. George where it all began. The trade winds were strong from the east as usual, and running down wind, moving fast, we made our first mistake. One wrong turn was made, and with rocketing force, the boom raced from one side of the boat to the other in a violent jibe. Boom! Nobody’s head was taken off, but the great force broke the boom at its end and the sail went flapping free. A small piece of steel which held the sail had been snapped in half. One boat fixed, and another boat broke. We lowered all of the sails and limped into the anchorage. 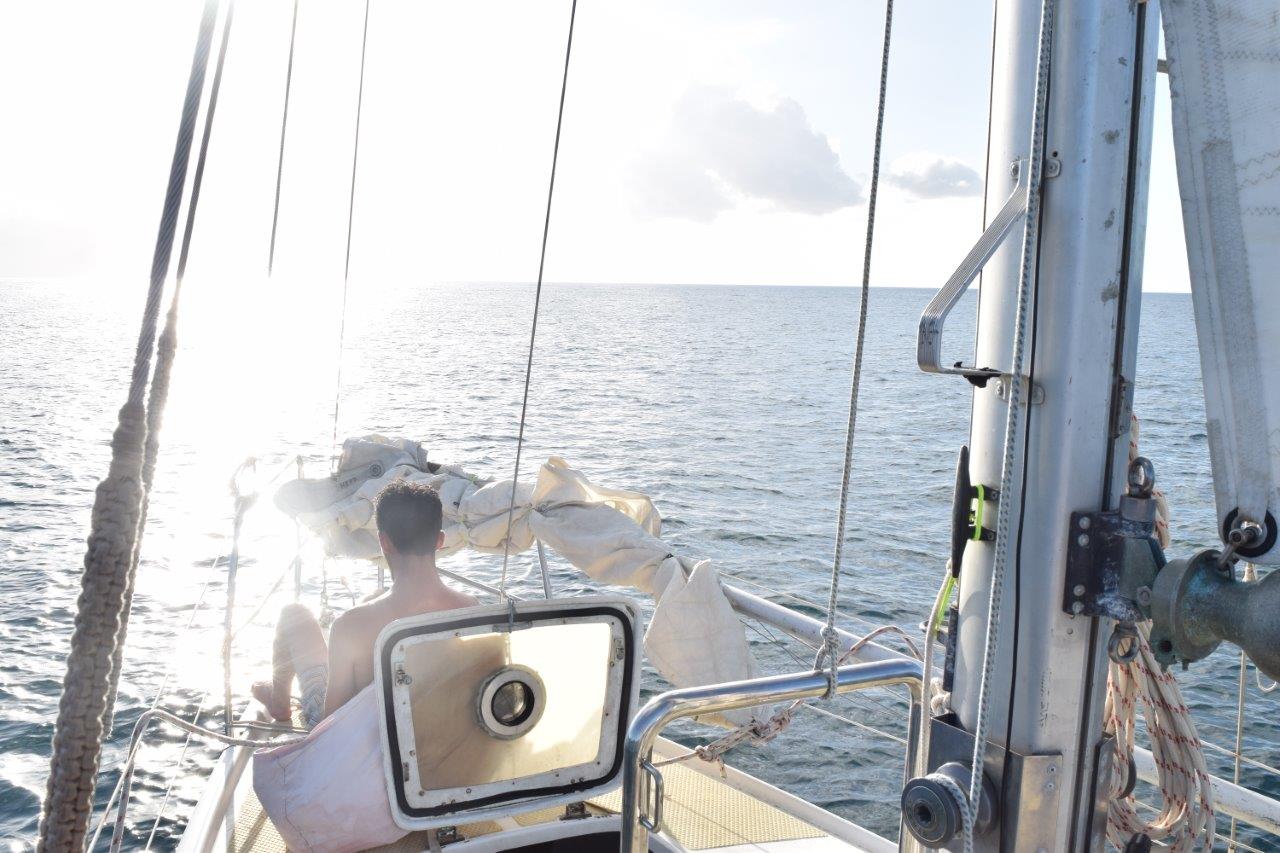 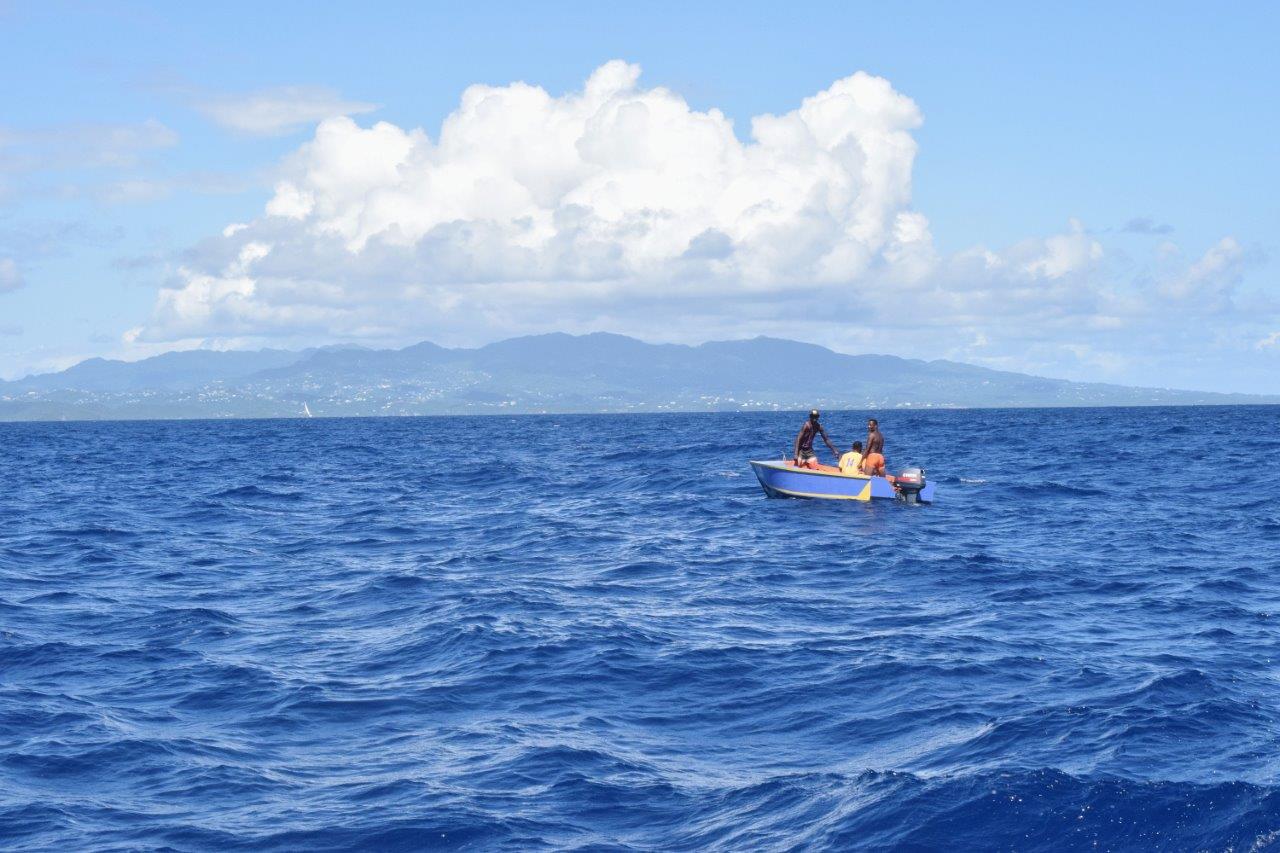 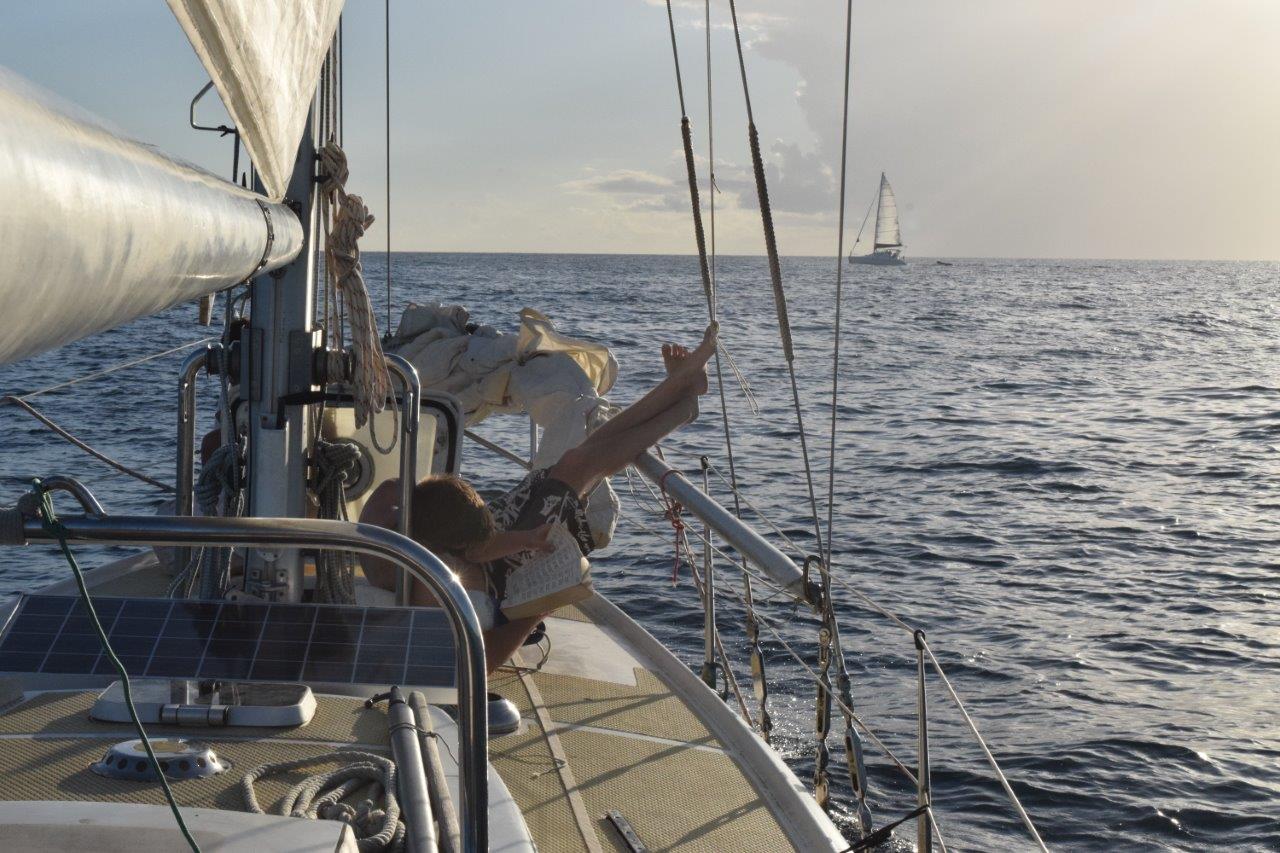 There has been some unrest in the crew, because we had been delayed two weeks, yet we are still paying a price none of us can really afford. However, I understand the reason for the cost, it makes this beautiful idea of Claes’ possible. Basically what he’s set up is a sailing school which takes in all us vagabond backpackers and gives us a place to sleep/eat and a crew to explore the Caribbean together. It’s like a floating hostel which we all work to run for ourselves. Of course since this is sailing school, it also means these are ‘learning’ boats. What happens with learning boats? You brake them. Petra and I have both been talking about the problems with this living situation. We love it here but know we will be leaving soon. We wondered if this problem would keep us stranded in Grenada, and if it would take us off the crew. 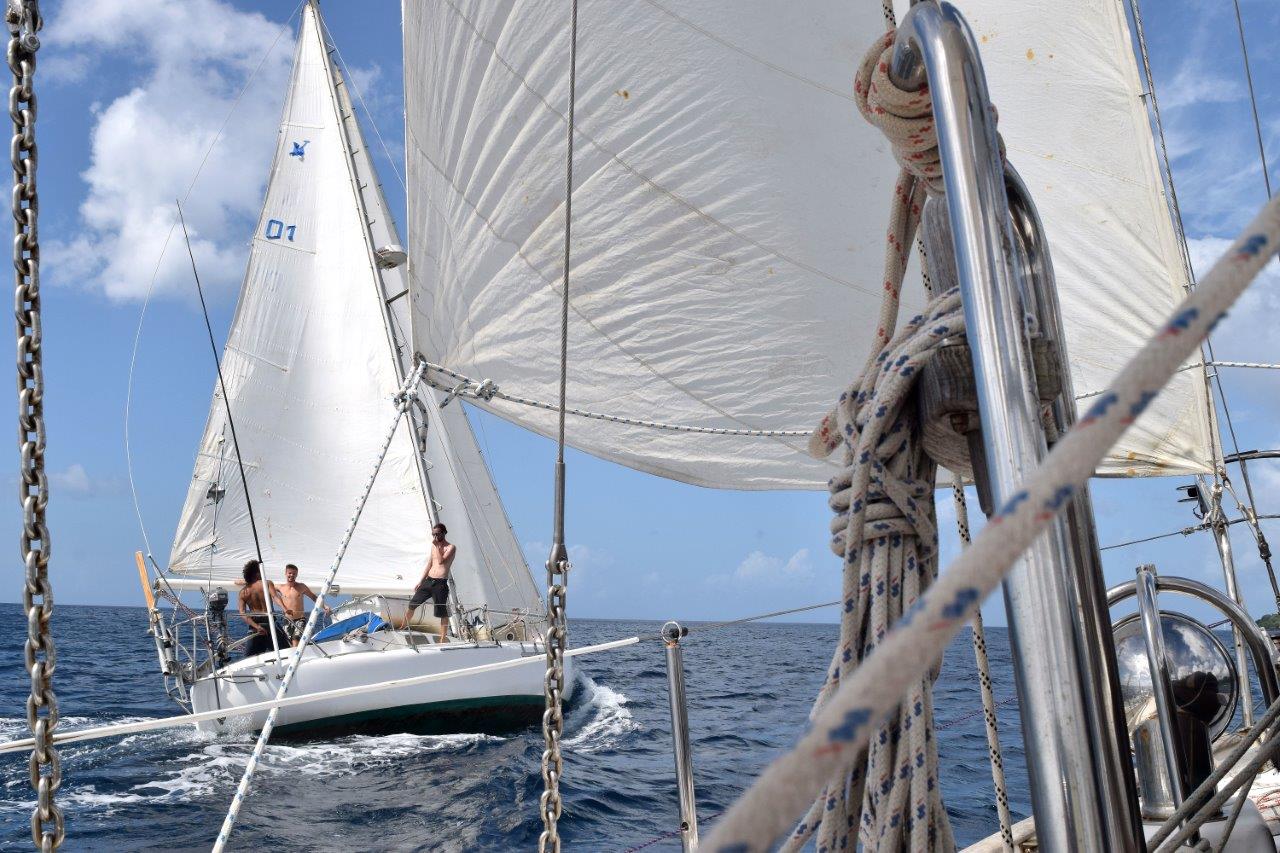 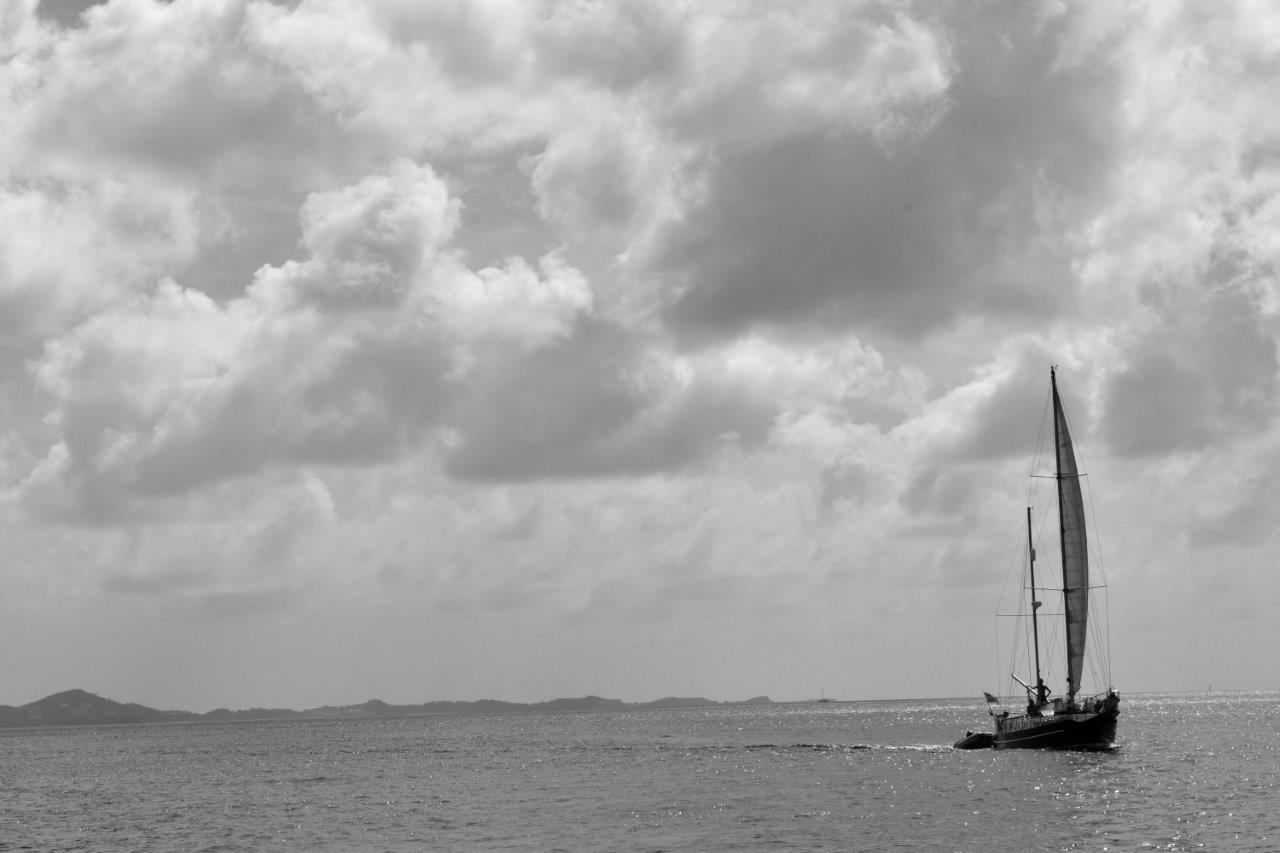 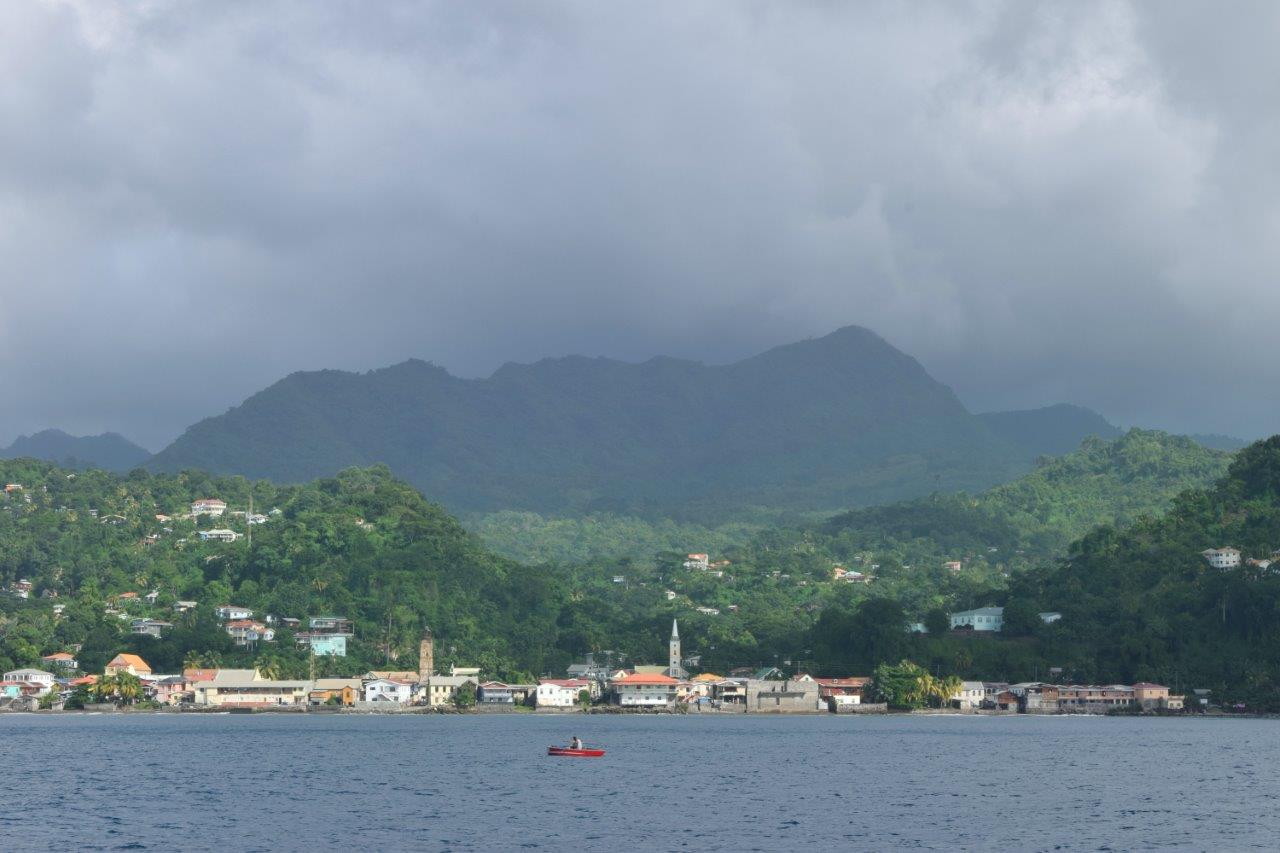 In the morning, Claes was able to sand down that broken piece. He fixed it by jerry rigging the mainsail a different way. The plan was to tackle the long sail to the north, to the last of the islands in Grenada’s jurisdiction – Carriacou. After hectic errands and getting a late start, we left St. George for the last time and headed north. To turn those last few corners of Grenada’s coast, and to watch the shore end in rugged volcanic cliffs meeting the Atlantic, we were filled with excitement. The sea was rough and crazy, and as we passed a famous landmark called the Kick’em Jenny, the sun began to set. On the crossing to Carriacou, the current overtook us in a way I’ve never seen and carried us suddenly far away from the Kick’em Jenny and way out into the Caribbean sea. The fight against the current added many hours to the journey. 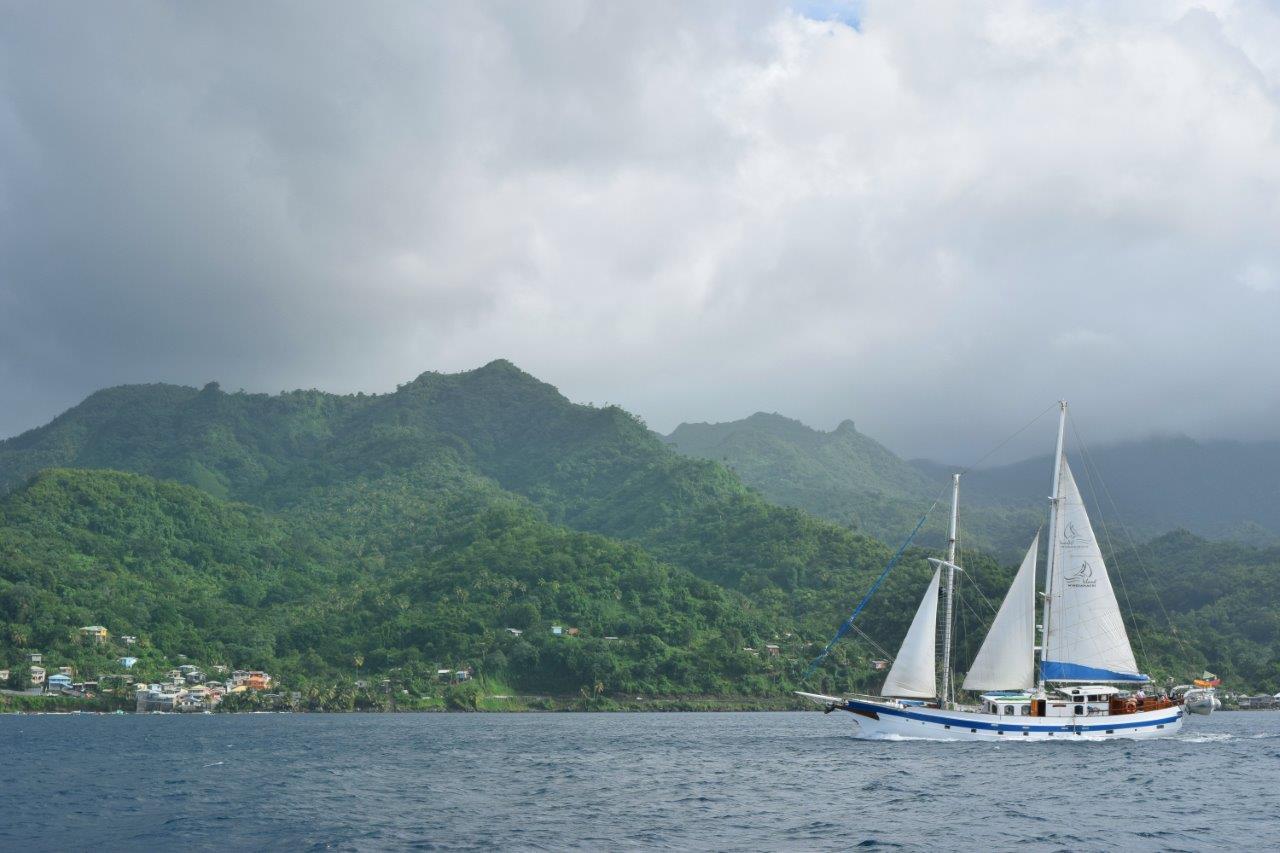 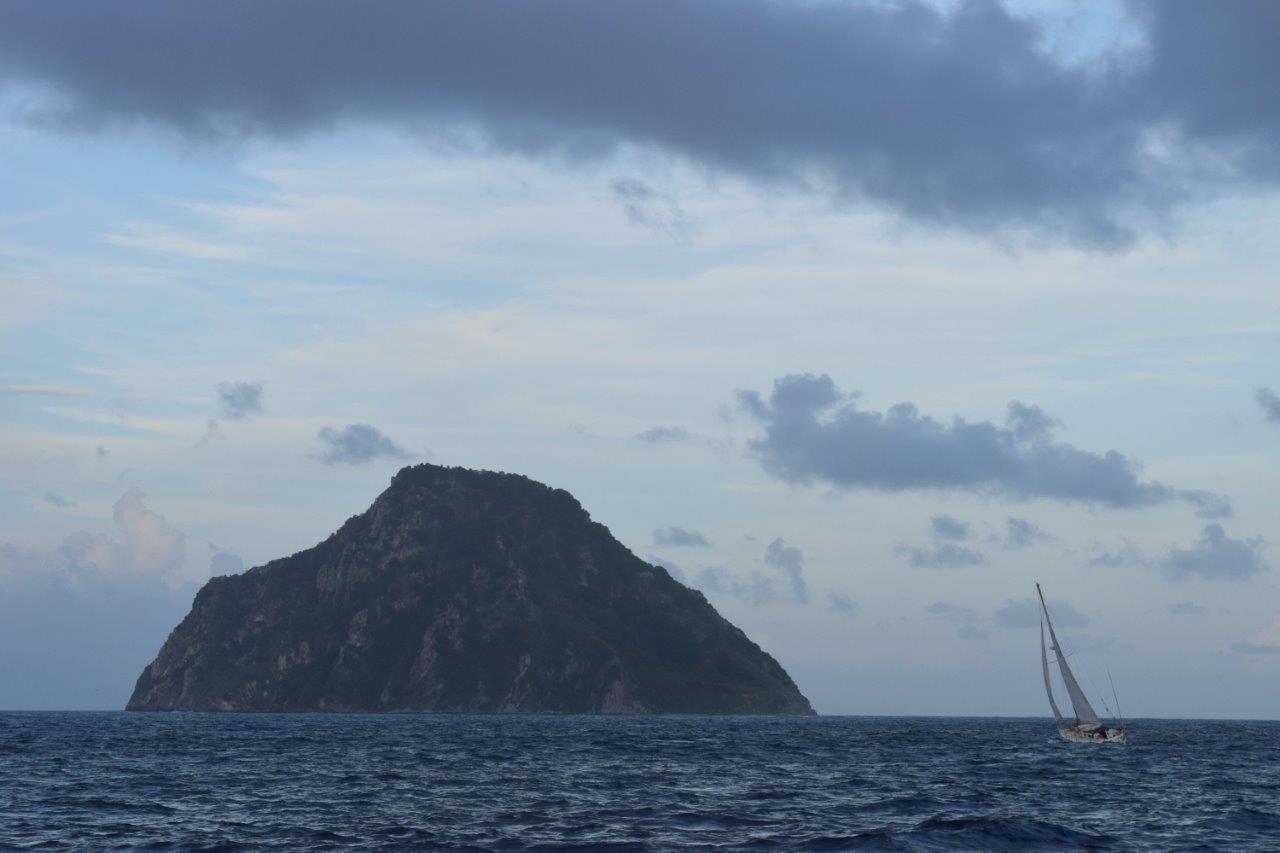 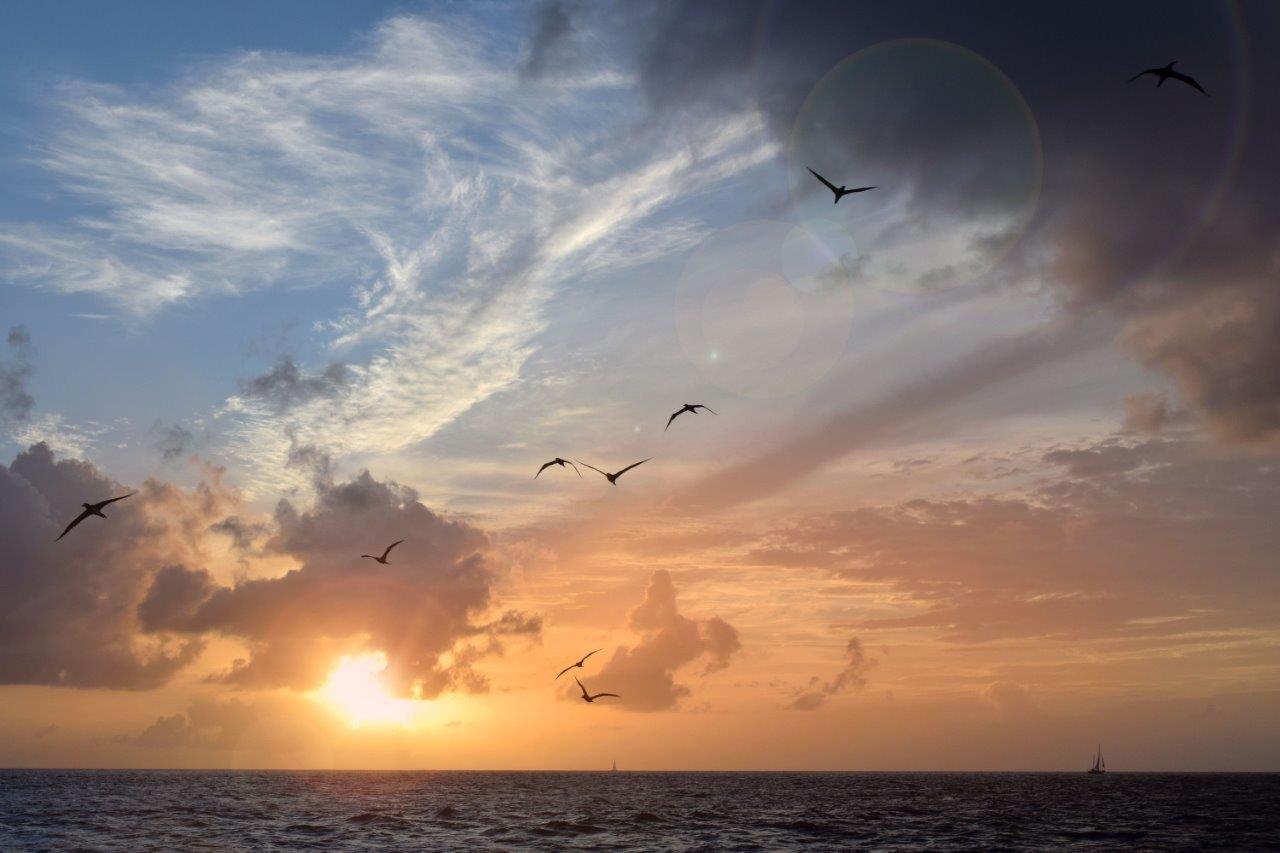 We lay on deck in the darkness and dozed off. Robin, Silvia, Petra and I onboard Shalom relaxed even as the waves and spray pounded us. We ate some pasta, having eaten very little that day. The full moon rose orange over Carriacou, silhouetting the village lights and dramatic mountains. Soon we came into that little paradise between massive cliffs.

It turned out nobody had studied the charts very well as we were coming into the harbor. It happened so suddenly, “CRACK!” It was jarring. A splitting, creaking, shaking, cracking; the effect of sudden shattering glass on my nerves. I was confused as the boat suddenly spun and heeled way over on its side. Silvia and I looked at each other panicked as the contents of the tilted boat rearranged themselves. “CRASH!” another crunching jolt, as though I could hear the propeller being chewed up. The boat listed way over sickly to the other side as though it sloshed over the rocks while filling with water. Or at least I expected to see it filling with water, but it was okay. A third strike to the hull jolted us as I called the other boats on the radio. “GOMA ROTA – SHALOM. We are in trouble! We are stuck on the rocks.”

“Can you repeat that please,” asked Alex even though he heard us loud and clear. “We are stuck on the rocks. We – are – in – trouble!” Of course there was nothing they could do for us. Shalom stopped moving and we calmed down. We put it in reverse and backed out. Then we were totally fine, just in a little bit of trouble from Claes. The bottom of the boat was scratched up pretty bad, but nothing had gone wrong.

We all drank that night after a long day, limping into the Tyrreal Bay anchorage at 10:30PM. Then it was yesterday and we took the day off. We went ashore on Carriacou and caught three different rides hitchhiking in truck beds. We made it all the way to the other end of the relatively small island. We helped our driver carry his load into his hotel with the collective energy of five young people. Then we made it to the Great North National Park and climbed Mt. Anse La Roche! However, the trail was too overgrown to make the top, but we did find a gorgeous viewpoint. The rest of the day was spent playing in the violent Caribbean waves of a wilderness beach. 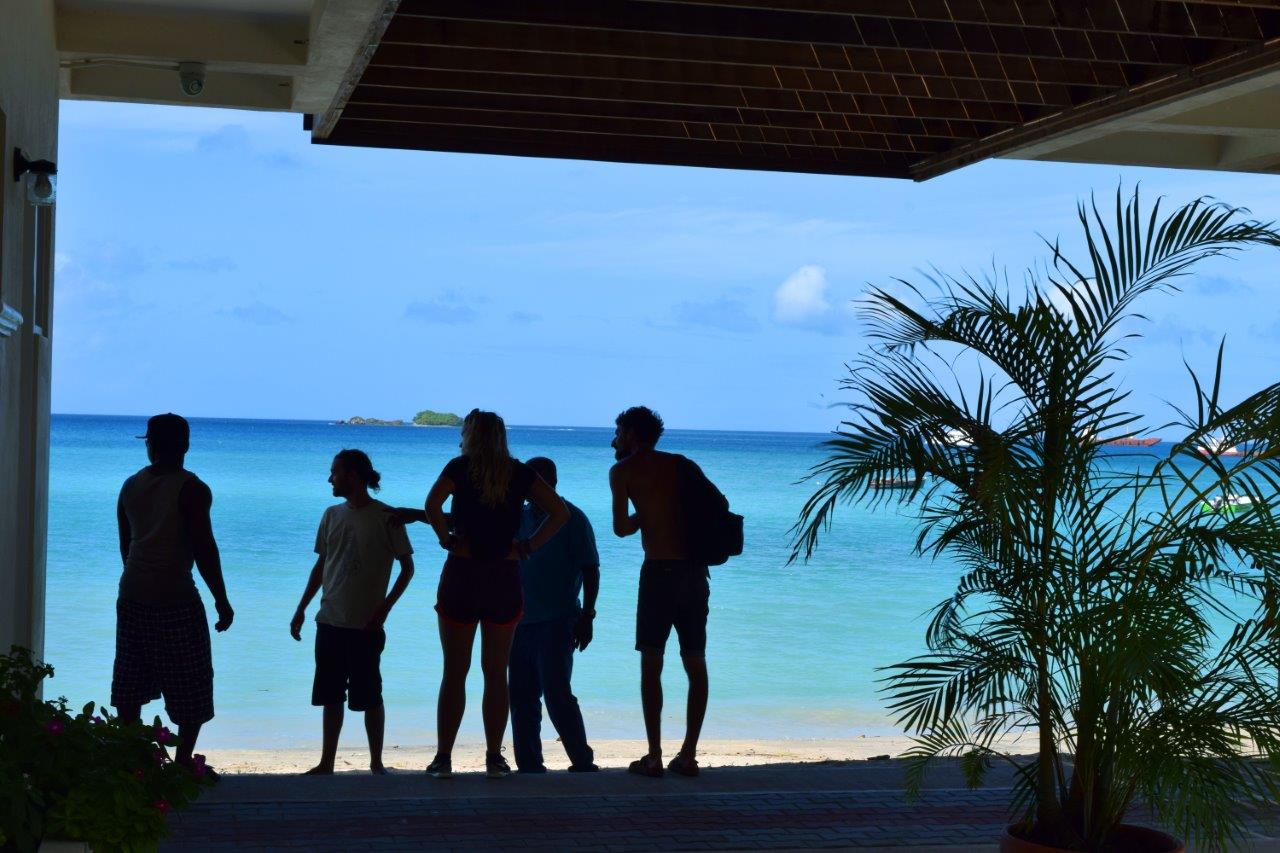 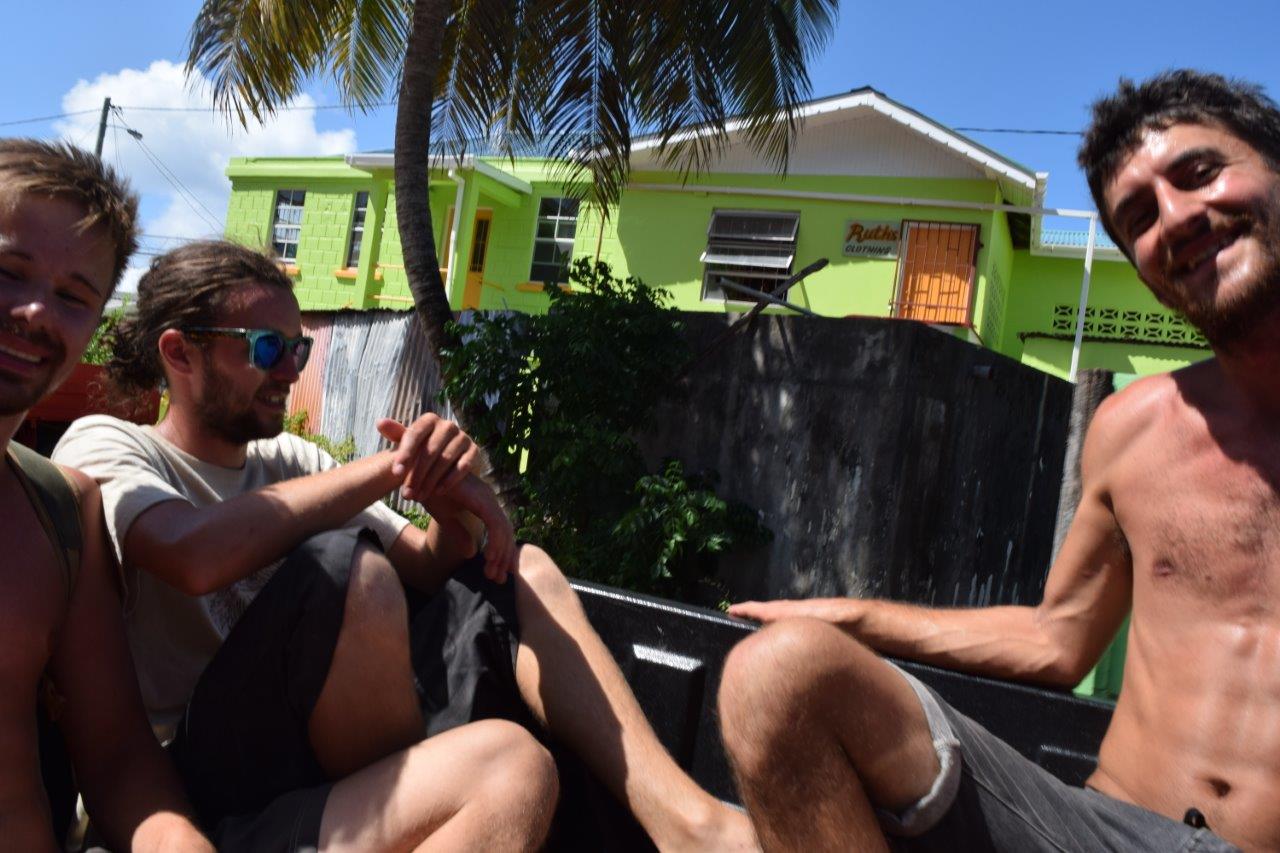 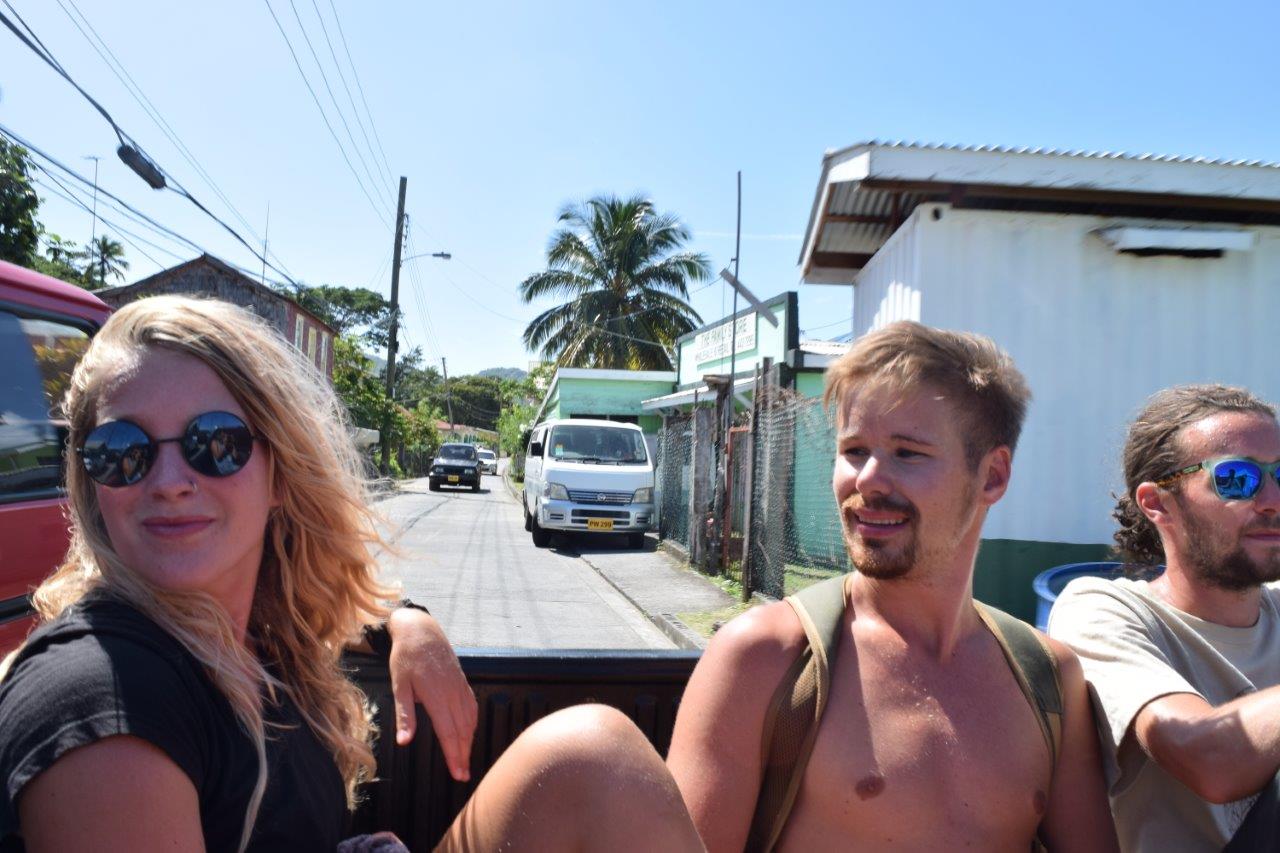 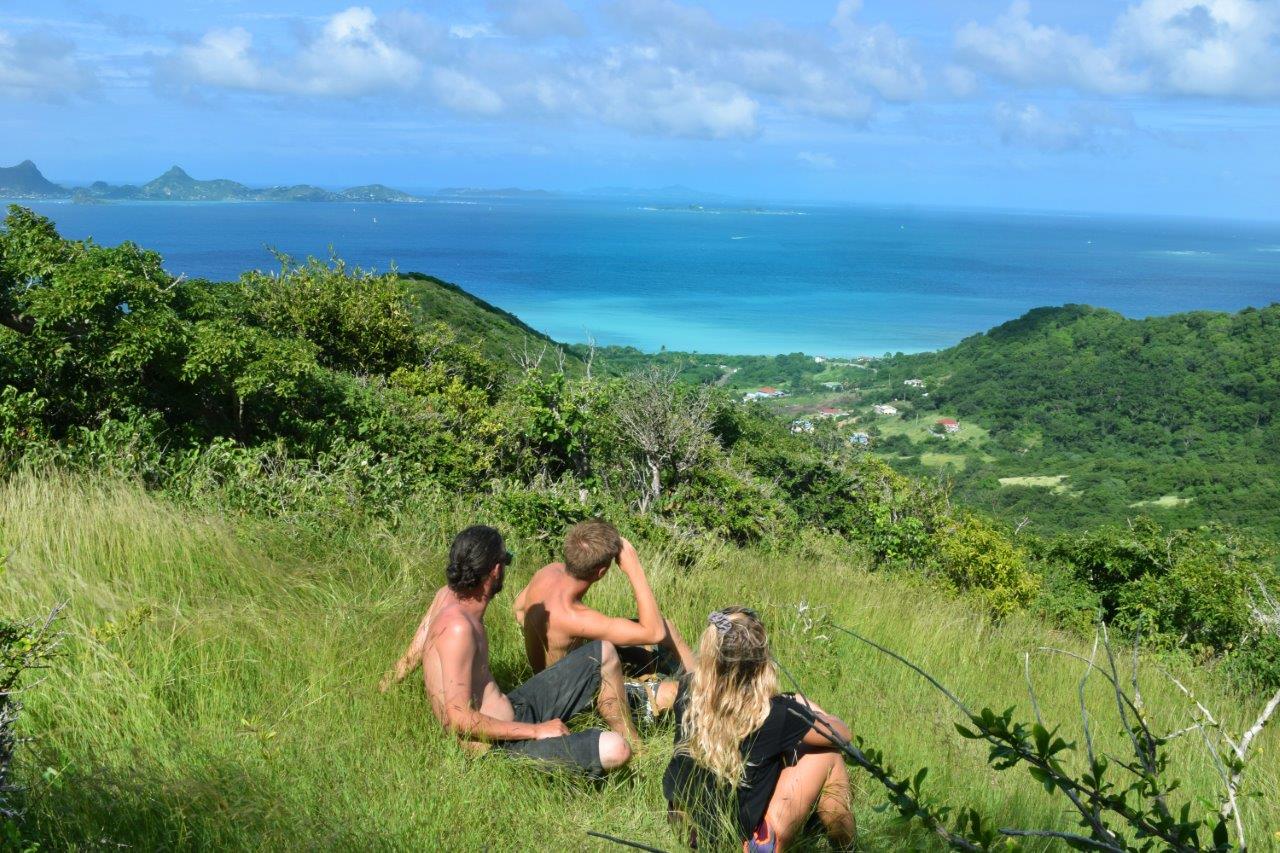 Currently, I am growing ever closer to Union Island, still sitting on deck and about to eat some rice for lunch. We’re having an excellent time, but the trouble in paradise is because since we spent two extra weeks on Grenada, it turns out we only have six days now to get to Martinique. The Grenadines will be rushed, and the International Crew is angry about it. There’s nothing to do but keep living and loving life, and I’ll have to take care of and look out for myself. The future is coming and it is uncertain. It may be stressful, and it scares me, but I’m headed to Martinique and embracing the adventure! 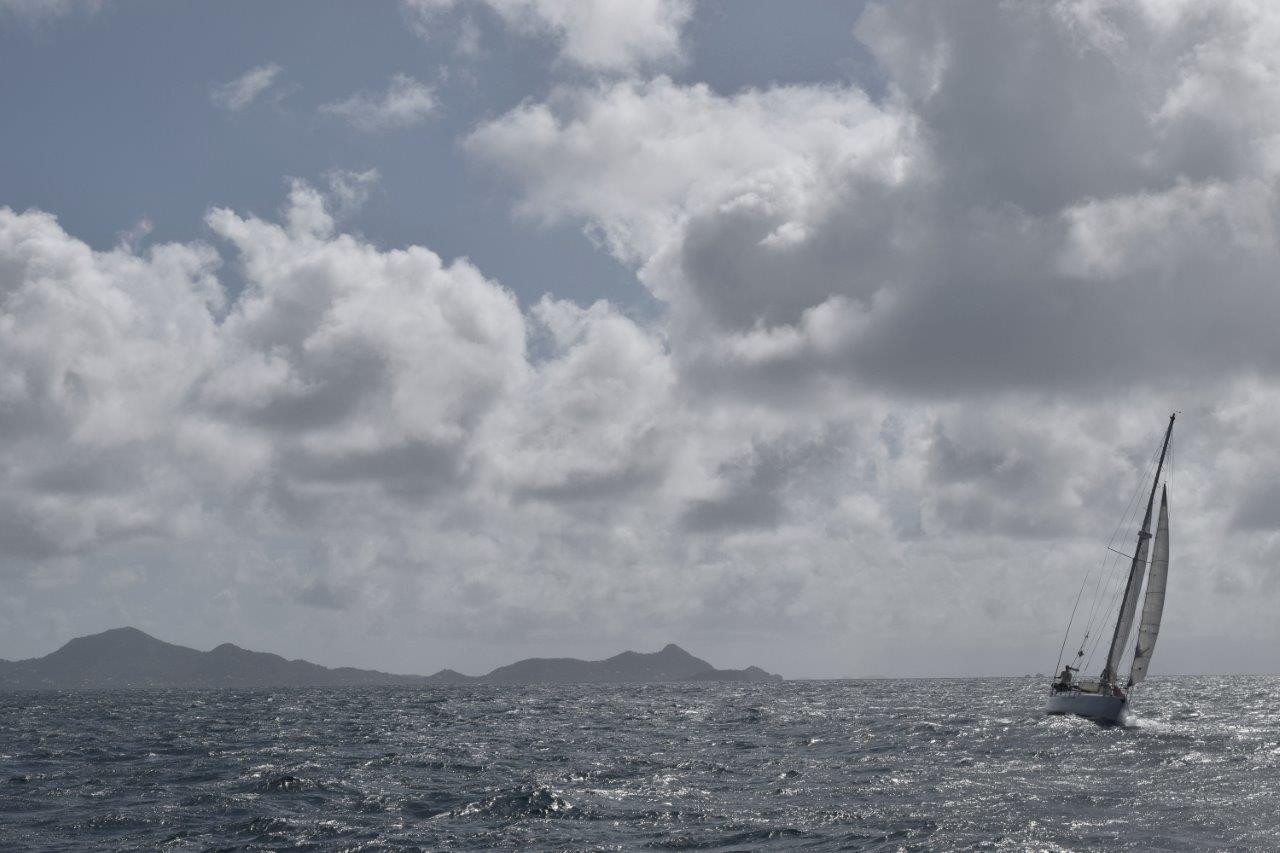